The Former Apartment of Louis Pasteur: A Gem of a Paris Museum 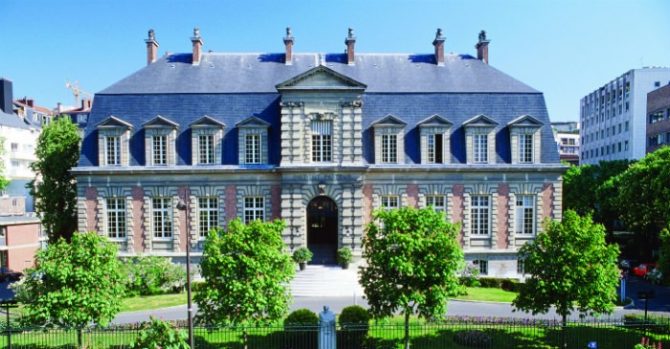 With allegedly more than 2,000 streets to his name, Louis Pasteur seems to beat even Victor Hugo’s record. Pasteur’s name had reached me before I was six, but it took several decades before I discovered his Parisian apartment-cum-museum; this was despite the fact that I lived round the corner for a full 12 months, and for many years drove daily along the nearby Boulevard Pasteur. I’m not altogether to blame, the place being so well hidden behind the Montparnasse Railway Station, tucked away inside the Institut Pasteur on the quiet Rue du Docteur Roux. For security reasons, an identity document is required at the gate. Visits are limited to one hour in the afternoon, a shortcoming worth putting up with, for the sake of one of the city’s best kept secrets and the dazzling surprise awaiting at the end.

The Institut Pasteur is a private foundation with worldwide ramifications. It was created in 1887, in the immediate aftermath of Pasteur’s discovery of the rabies vaccine the previous year, as a body independent of the administrative machine. Donations poured in following Pasteur’s sensational discovery of the new vaccine. Pasteur joined the fundraising campaign, knocking on the doors of potential philanthropists – notably, Madame Boucicaut, the widowed owner of the Bon Marché department store, who signed him a cheque of 250,000 Gold Francs right away.

By 1888 the elegant brick-and-stone building, in the style of Louis XIII, was ready to accommodate Pasteur and his wife Marie in the comfortable double-storey apartment where he would live during his final seven years. The inauguration ceremony of the Institute was held on November 14 of that year, in the presence of French President, Sadi Carnot.

The apartment stands as it was, a typical bourgeois interior of the late 19th century – dark and cluttered, in striking contrast with the luminously spare interiors we favour today. Only the laundry room was done away with – this is now the scientific memorabilia room, which chronologically showcases Pasteur and his collaborators’ ground-breaking discoveries. It’s a fascinating journey into the workings of Pasteur’s brain which, combined with his exceptional sense of observation and intuition, led him from one discovery to the next, and finally to the rabies vaccine, by which time he was 65 years old.

On view are his early magnifying glasses and first microscope, which had a magnification power of 800 times, an extraordinary achievement in its day yet so modest in comparison with today’s one million. Also on view are apparatuses that he designed and created himself, such as large cardboard models of crystals, for the benefit of his students in crystallography who were seated near the back of vast lecture halls, or the swan-neck flask he created to examine and refute the theory of ‘spontaneous generation’.

The bathroom has also been kept and was one of the city’s first to be installed with a tub and hot and cold running water, an indulgence which makes sense in the home of the father of modern hygiene. Some of Pasteur’s clothing items are displayed here – his professor’s gown and the famous ‘habit vert’ of the French Academy, the third academy to which he was elected, although his career was in no way literary.

A chemist and a physicist-turned-biologist, and eventually father of microbiology, Pasteur’s election to the Science Academy goes without saying. However, his election to the Medicine Academy was his ultimate triumph after a life-long struggle with the medical community, who’d spurned the findings of one who wasn’t a medical doctor. For years, surgeons in France continued to operate on patients without washing their hands, disregarding his discoveries on germs and sterilization.

Time is suspended in the apartment proper, but brought alive by little touches – Madame Pasteur’s unfinished piece of knitting in her bedroom, Pasteur’s paper knife decorated with a French flag on his desk, which tells us that he was a patriot, as also suggested by Jean-Jacques Henner’s portrait of a widow of the Franco-Prussian war, Alsace. She Waits (1871). Each item tells a story – Pasteur’s portraits of his father, a modest tanner in the Jura region, and his mother shown in a traditional white cap. Painted when Pasteur was 13, they reflect his precocious gift for art, which he later gave up for science. At the other end of life, the double bannisters and short steps of the staircase were specifically designed to assist Pasteur, who’d been afflicted with paralysis in 1868.

Family photos and paintings bring alive happy moments but also the loss of three young daughters. His son survived and one daughter, who left him two grandchildren whom he treasured in old age. The portrait of Pasteur with his granddaughter was painted by Léon Bonnat in 1886 and was a gift from JC Jacobsen, the Danish brewer who founded Carlsberg. It reminds us how Pasteur’s work on fermentation benefited the wine and beer industry– the silk industry, too. Among the gifts on display are a malachite vase from Prince Alexandre d’Oldenbourg of Russia, a silver vase from Sweden and one by Emile Gallé. Presented by the École Normale Supérieure on the occasion of Pasteur’s Jubilee, the latter’s engraved with a microscope, microbes, a dog, and a verse by Victor Hugo. In 2008, the complete restoration of the small dining room, not least the perfect reproduction of its wallpaper, was carried out thanks to an American donation.

Contrary to the general assumption, Pasteur doesn’t rest in the Panthéon, but in a private crypt beneath his apartment, a privilege enjoyed by Napoléon alone, granted thanks to his wife’s intervention. Designed by Charles Girault, the architect of the bejewelled Petit Palais, Pasteur’s tomb takes centre stage under a vault of radiant gold mosaic that’s decorated with symbolic, polychrome representations of his work. Inscribed on the pendentives of the cupola are the three Christian virtues of ‘Faith, Hope and Charity’, and also that of ‘Science’. Pasteur’s wife Marie lies there too, by the altar, and his assistant Émile Roux was put to rest in the garden.

Thirza Vallois is the author of Around and About Paris, Romantic Paris and Aveyron, A Bridge to French Arcadia. Visit her website: www.thirzavallois.com