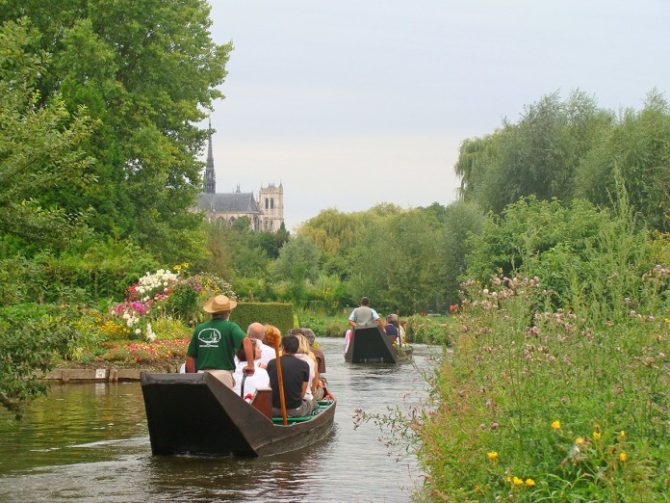 One hour from Paris by train, the city of Amiens in Picardy has plenty going for it. Discover the tallest cathedral in France and the home of writer Jules Verne – now open to the public, plus floating gardens and delicious local delicacies.

Kick-start the day by visiting the UNESCO-listed Cathédrale Notre-Dame d’Amiens – the tallest complete cathedral in France, measuring 42 metres high. The entrance to the cathedral is covered with statues, some of which reveal traces of the building’s original colour. Amongst the statues and carvings on the cathedral’s portals are martyrs holding their own severed heads and scenes depicting the positive and negative characteristics of each of the zodiac signs. Even the flooring is more decorative than most, combining several different designs. During the summer and around Christmas, Amiens cathedral is lit up at night to show how it would have looked in colour in the Middle Ages.

When the cathedral bells ring at midday, you know it’s time to find a restaurant in which to

sit outside and watch the world go by over lunch. La ficelle picarde is a local speciality – savoury crêpes filled with cheese, mushrooms and ham, then baked in the oven. While you eat, admire the beautiful view of hanging baskets full of brightly coloured flowers that adorn Amiens during the summer months.

Amiens grew up around the banks of the Somme and the relationship formed between its citizens and the river can still be seen today. After lunch, discover the city’s floating gardens known as hortillonnages, which are only accessible by barques à cornets – the same boats used for taking fruit and vegetables produced in the hortillonnages to market. Wave to any gardeners out tending their patch as you motor through the allotments by boat!

The Hortillonnages Festival (June to October) sees sculptures, musicians and other artists planted amongst this watery world. The area looks its best at this time of year, attracting many visitors to appreciate the artistry on show in the floating gardens.

Come evening, head towards the Quai Bélu or Place Gambetta, which is surrounded by shops bursting with gift ideas and delicacies from both the region and further afield. A popular meeting place for people of all ages, this is the perfect place to pull up a chair at a pavement café to take a well-earned break and watch the evening’s goings-on unfold. Underground are the city’s Roman remains, visible through portals set into the pavement.

The celebrated author of Around the World in Eighty Days lived in Amiens from 1882 to 1900. Visitors are now free to explore the former home of Jules Verne and spend the morning getting to know his wife Honorine, his maid Rose and various characters from his books, by way of over 700 objects on display. These souvenirs reveal the inspiration for some of the writer’s best-loved books.

2006. Inside, there are four floors to discover, complete with 19th-century furniture – almost as if Jules Verne never left.
For everything you need for a lunchtime Picardy picnic, don’t miss La Halle au Frais next to the belfry or the floating market in quartier Saint-Leu on Saturday mornings, where the seven hortillons (market gardeners) sell their produce. Buying fresh fruit and vegetables directly from the gardeners themselves is a luxury that deserves a drawn-out lunch to enjoy them over!

After your picnic, take a walk in the fresh air (and a trip around the world) at Amiens Zoo. There are nearly 300 birds, mammals and reptiles of 60 different species to see at this family-friendly park, including red pandas, and not to mention performing seals – entertainment for all ages!

Torn between wiling away your afternoon in a museum or on a sunny terrace? The Musée de Picardie has both – permanent and temporary collections as well as a terrace at the front. You can learn about ancient Greece and Egypt, and the Gallo-roman origins of Amiens, before discovering the riches of the medieval collections as well as artefacts relating to Picardy. There are also many fine art works on display.

For further short break ideas, visit the Amiens tourist office website. The Tour de France will pass through Amiens this July, with stage five finishing there on 8 July, and stage six kicking off from Abbeville on 9 July. Visit the Tour de France official website for more detailed information.