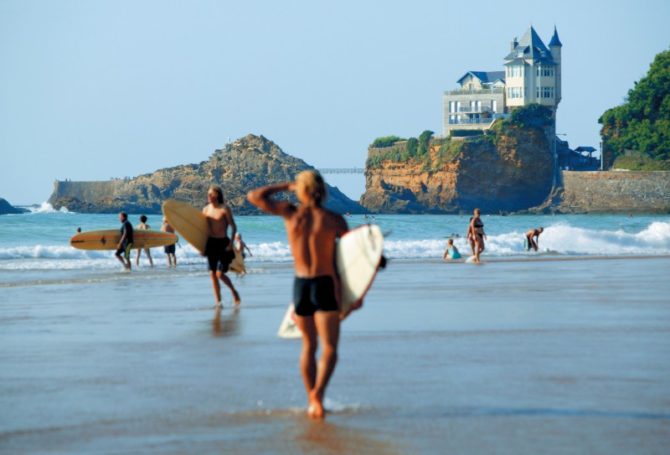 Anyone who has spent time in France’s Basque country knows the region’s trademark sights of rolling green hills and rapidly-rising mountain peaks; its traditional red and white etxeak (houses), and the impeccably tidy look of its villages and towns. And, oh yes, the long lines of cars commuting to and from the countless, and usually packed, golf courses. But there’s another scene particular to the Basque seacoast that’s often forgotten: the throngs of people both young and old peering from boardwalks and promenades at surfers tearing up the ocean waves, and often wistfully commenting, “Looks like fun. I wish I could do that”.

Well you can, and it’s not as difficult as many people imagine. Better yet, with an entire industry now promoting the Basque coast’s reputation as Europe’s surfing capital, getting set up with the necessary equipment and tutoring to catch your first wave has never been easier. That support structure also means a few hours of surfing can be organized as part of a full day of more traditional Basque tourism—though chances are, once you’ve tried it, surfing may wind up making ordinary sightseeing feel a bit bland.

Testing those breaking waters will also open the door to a fascinating sub-culture. Anyone can don baggy shorts and shirts from international brands like Quiksilver, Billabong, Ripcurl or even French upstart KanaBeach to effect that surfer look. Indeed, hundreds of shops along the Basque coast make a killing getting ordinary landlubbers to do just that. But it’s something else altogether to become a full-fledged, waterlogged member of the surfing community by grabbing a board and diving in—a plunge into a global tribe whose passion transcends borders and language barriers.

Why should you bother, when surfing’s steep learning curve makes the goal of mastering ocean movement to get that memorable ride—and incomparable sensation—appear as far-off as it can be frustrating? Simply because surfing’s also about everything that happens before such moments of soggy success. It’s falling off your board at the most critical moment, but finally understanding what you did wrong. It’s battling what seems like the entire (Biarritz-based) Chinese Army trying to catch the exact same swell you’re after—a swell which usually leaves you behind in its wake. And it’s taking what seem to be endless waves on the head as you desperately attempt to paddle out beyond the break line, feeling quite certain you very nearly drowned several times during that long, tiring struggle.

None of that may sound like a lot of fun to people who’ve never done it. But it’s all part of the wider challenge of surfing that inspires world champions and the rawest of neophytes alike to invest considerable time and effort in exchange for those relatively short triumphs of wave-riding exhilaration.

“I can really see why people get hooked on surfing—not just as a sport, but as way of arranging your day,” explains Emma Tanner, a 22-year-old Australian from Melbourne who signed up for a week of daily lessons with a group of six friends all visiting Biarritz. Tanner admits there’s a certain irony in traveling half the world to take up a sport she’d essentially ignored at famous surf beaches back home. But she says one of her biggest motivations in giving surfing on the Basque coast a shot was to experience an essential element in modern Basque life—along with the cultural and culinary exploration she and her friends also had in mind.

”People told us we really had to try surfing during our trip—how the sport and the lifestyle are really a big part of being here, and the reason so many people come,” Tanner says. “And that’s really true: even as a beginner, you sort of feel like you’re part of something—kind of a bigger scene.”

“Surfing is now an integral part of the local culture, and people want to see what that’s all about,” says Elisa Gayraud, a former youth champion who teaches surfing to children and adults, locals and tourists at the Anglet Surf Club—the largest in France. “It’s one of the few sports you can fully participate in as an equal from day one. No one looks down on beginners—we’ve all been there. A lot of the appeal of surfing is that it’s more about the journey than the final destination. Just doing it is the goal.”

That laid-back and fluid attitude is one reason there’s still ample room among the Basque coast’s waves for the older, grayer heads frequently mixed among the younger majority. It was the older surfers, after all, who first caught the surfing passion and passed it along to the burgeoning ranks of today’s younger crew. Surfing first came to France (and Europe) in 1956, when American screenwriter Peter Viertel was in the area for the filming of his adaptation of Hemingway’s novel The Sun Also Rises. When Viertel realized the waves were also breaking, he promptly paddled his wooden longboard out to sea off Biarritz’s Côte des Basques beach—the same spot where Tanner and her friends took their first lesson nearly 50 years later. It didn’t take long after Viertel was seen making his first bottom turn in Biarritz’s waters for curious local residents to join him.

As word of a new spot being surfed on French beaches spread, enthusiasts from abroad began flowing to the area, making Biarritz and the Basque coast the “capital of European surfing”. (That unofficial title stuck even after World Championship events were established up the coast in the Landes, and down south in the Spanish port of Mundaka.) Surf shops and schools sprang up, and over time provided as big a tourist draw for hotels and restaurants as golf, bullfighting and pelote, the traditional Basque game—with several variants—of handball or racket ball.

So how does the would-be surfer wade in? The first move is to contact a surf school close to where you’ll be staying (virtually every town on the Basque coast has several that set students up with boards and wetsuits). The next step is determining with instructors the package best suited to your level of interest, stamina and length of stay in the area—the possibilities range from single session, hour-long walk-in lessons for around $50, to single or double daily sessions running one to two hours for an entire week, at $200-$300. (Prices are a little lower if you’re willing to be part of larger groups—usually limited to 10 students—and a little more expensive if you want the more personalized attention of private instruction.) A little web research and communication will allow you to set things up ahead of time, although—since “hang loose” was one of the earliest catch-phrases of surfing—most schools are also open to improvisation once you’ve arrived.

While you’re bound to get lots of inspiration watching the young, buffed and bronzed set tear up the waves at Biarritz’s storied Grande Plage, it’s unlikely you’ll be getting instruction alongside them. Apart from the excellent school run by surfwear company Quiksilver—located right on the Grande Plage promenade—most Biarritz schools prefer to shuttle students to beaches with smaller, slower-moving waves and decidedly fewer bodies competing to ride them. First stop will likely be the Côte des Basques, less than a kilometer south of the Grande Plage, where less hollow waves won’t pack too strong a punch, but will still provide plenty of rushing white water to ride closer to the beach. Though almost everyone balks at the initial exercise of floundering in waist-deep white water as major waves beckon nearby, beginners will find that even an hour of foam-time will let them start popping up on the board and standing firmly far faster than trying to learn on peaking swells. Trying to start on the big ones will probably result in wasting most of your lesson getting spat back towards the beach by waves you’d have promptly fallen from even if you had managed to get out to them. Take things in steps, and heed your instructor.

Teachers are invaluable in many other ways too. With Mother Nature’s role always essential in surfing, the weather, swell size, and your ability level will dictate what other regional beaches are best suited to you as conditions change. The beaches of Anglet, just north of Biarritz, are known for relatively bigger, more powerful surf on any given day, meaning newer surfers will be directed to them mostly when conditions make the waves farther south too small to ride. Conversely, when swells start increasing—making even the Côte des Basques a bit too big—beginners will be ushered down to Hendaye, whose orientation and sand bar usually prevent waves from getting too large. Such local knowledge of conditions—not to mention tide schedules—is one reason that getting some initial formal instruction is such a wise move. It also vastly facilitates commuting from spot to spot, with school vans that can handle nine-foot sponge-boards more easily than the usual compact rental car.

Whether you decide to take daily lessons or wade into the water with a one-hour rental board, a few things will remain the same. At the end of the effort, you won’t hand your wetsuit back as a confirmed surfer—though you’ll probably have gotten up a few times, and had fun even when you didn’t. You’ll also be astounded at how good getting that tired feels at the end of the day—but it will also probably rule out ideas about long drives to far-flung dinner spots or late-night benders at the many local bars and discos. Oddly enough, you’ll probably find that the most refreshing aspect of the beach-bum surfer life, out of the water, is simply hanging out, bagging sun and knocking around among the rest of the crowd trying to fill the time until their next session back in the waves.

Finally, like many beginners, you may find yourself heading home thinking far more about your best rides than you imagined you would. Those fond, even intoxicating memories might even have you coveting your own board or wetsuit as a Basque coast souvenir. If so, have a word with your instructor or other surf school staffers: most schools sell their used equipment at pretty good prices towards the end of every season, and you can head home armed as a new member of surfing’s global club.

Originally published in the July/August 2008 issue of France Today; updated in September 2011