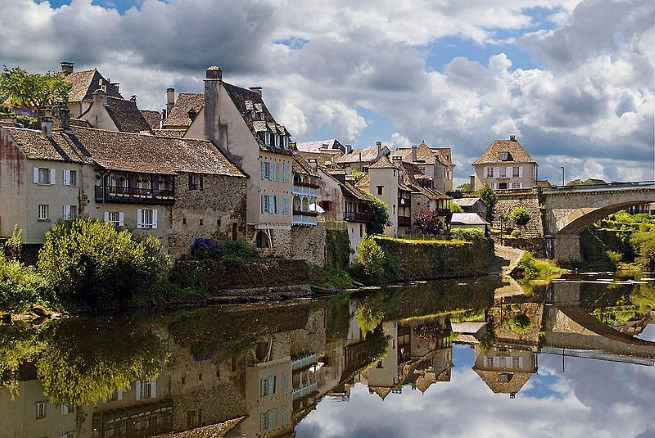 A river and people

In recent years due to an increase in the number of tourists visiting Argentat, the town has made enormous efforts to achieve a ‘tourist friendly’ environment and has had to invest in improving the quality of services offered such as accommodation and restaurants. Fortunately this has been achieved without ruining the natural beauty and quality of life that initially attracts holidaymakers to the area.

Argentat is situated along the river Dordogne, which runs through the town towards the Perigord, in a beautifully magical and peaceful setting. During the summer months, restaurant and café terraces are bursting at the seams with customers all spending their days enjoying the scenery and river views. During the warm evenings as the sun goes down, couples stroll arm in arm along the riverbanks taking in the breathtakingly beautiful surroundings. And whatever the season in Argentat, there always seems to be a relaxing holiday atmosphere!

Although in recent years the number of tourists visiting Argentat has increased, holdiaymakers have been flocking to the town since before the Second World War. 94 year-old Jean Saintangel recalls: “During the years between the two Wars, international cruises were organised along the River Dordogne”. After the war along came the seventies and a new fashion, the campsite, set up aside the riverbanks.

A rich culture and history

Because of the geographical situation of Argentat between l’Auverge, le Limousin and le Quercy, the town has adopted a multicultural profile. As states René Teulade, the previous town magistrate “The Argentacois character is made up of le Limousin calmness, the Auvergnat harshness and the bawdiness of the Périgourdin”.
During the XVIII and XIX century, the River Dordogne was linked to Argentats economic growth, when wood and local products such as cheese, nuts and animal skin were ‘shipped’ to Bergerac, Libourne or Bordeaux. This episode in history is currently highlighted in an exhibition at the Maison de Patrimoine in Argentat.

The quality of life, a joint wealth

Jean Pradinas, a former television producer who has now retired in the area describes Argentat as “a little corner of paradise”. But what makes Argentat such an idealic place to settle? Why does it offer such a good lifestyle? After all are most towns in France not supposed to offer an excellent lifestyle? The answer seems to lie within the associations sector. Indeed within this small town of a population of 3,500, there are 69 associations. This demonstrates the level as to which the population invest in their towns and the services and businesses on offer, but also the willingness to maintain good relationships between each other and visitors to the area.

Daniel Delrieu, an optician who has lived in Argentat for the last ten years tells us how surprised he always is at the togetherness of the town and how the community always pulls together for one cause or another. Indeed when the youth rugby team played in the French championships, the whole town were supporting and encouraging them. And when they came home victorious, everyone was waiting in the streets to welcome them and celebrate. Daniel Delrieu is in fact so proud of Argentat that he has created a promotional website, containing features such as a daily weather forecast, current regional news and other practical information concerning Argentat.

A new form of tourism

Following the war when so many French towns suffered economically with the populations fleeing the countryside for the towns in hope of finding work and a better life, Argentat managed to maintain many of its rural networks. Nowadays Argentat is considered an important town within the region with 1500 jobs, many businesses and services. “Today tourism is Argentats principal economic activity”, states Michel Naves, the director of the towns’ tourist office. “Between April and November 2004, 24 000 people came to holiday in and around Argentat and we have had to adapt to the needs of these tourists”.

Although the campsites are still popular mainly with the younger holidaymakers, the first challenge in Argentat was to offer an improved and wider range of accomodation. Plans were therefore put in place to increase the numbers of chambres d’hôtes, gites and holiday lets. Argentat also had to adapt to new expectations from holidaymakers who were better informed about the area and were more demanding, wishing to undertake new activities. Sports facilites, and cultural activities such as Festival de musique and la Foire des potiers were put in place and activities surrounding the river and the countryside were organised, namely fishing, organised walks, and water sports.

This recently modernised tourist industry in Argentat has been carefully planned and improved to ensure the town is shown at its best and that the architecture, countryside and quality of life has not been ruined in the process.