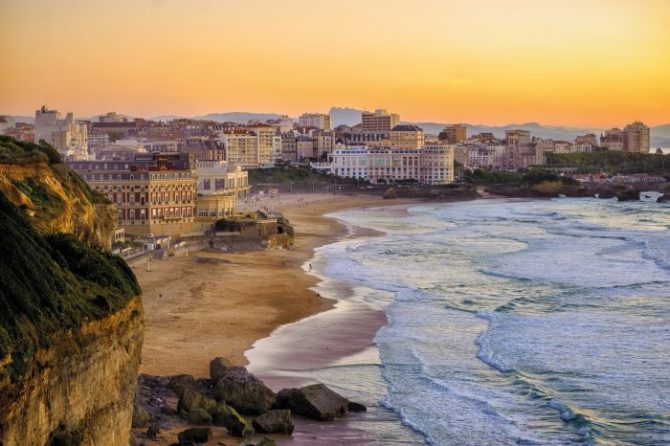 Wander along the winding promenade at Biarritz and in little more than an hour, you will walk a timeline through the history of this stylish Atlantic Coast resort.

Biarritz wears its past on its sleeve, its flamboyant development and vibrant personality clearly visible for those with eyes wide open. Played out against a backdrop of rolling Atlantic surf, there are few nicer ways to take an urban history lesson.

Today Biarritz is the first B in the Basque trio of B-A-B, an administrative acronym shared with the neighbouring beach resort of Anglet and the city of Bayonne, unofficial capital of French Basque Country. Each member of the trio is unique, but together they offer a beguiling lifestyle with a distinctly Basque flavour. 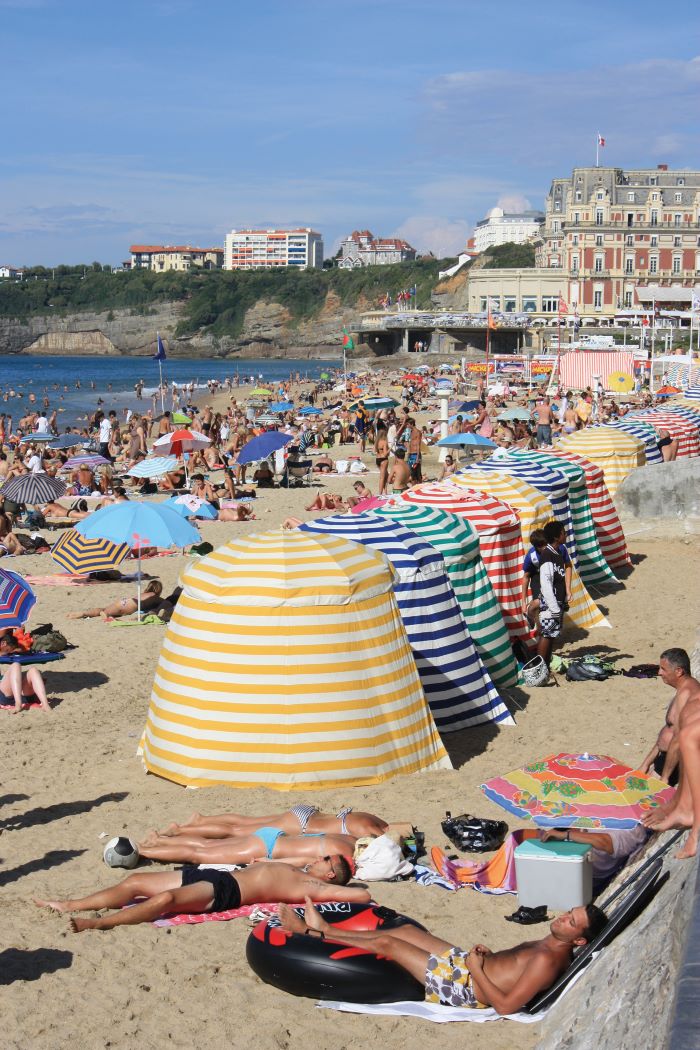 Soaking up the sun on the beach © Gillian Thornton

There were settlers here on the Basque Coast way back in prehistory, but the story of Biarritz really begins in the Middle Ages when the town was a base for Atlantic whalers. The last whale was landed in 1686 at the Vieux Port and today’s maritime activity mainly consists of fishing trips and water sports, centred on the Port des Pêcheurs. Constructed in 1870, this bijou fishing harbour is fringed with colourful fishermen’s cottages, or crampottes, and with many now operating as restaurants. It’s a great place to watch the sun go down over a plate of fresh local seafood. The promenade gives first-time visitors a real feel for what makes Biarritz special, and the Port des Pêcheurs is a good starting point, close to the Grande Plage and easily accessible from the town centre via Place Sainte-Eugénie. 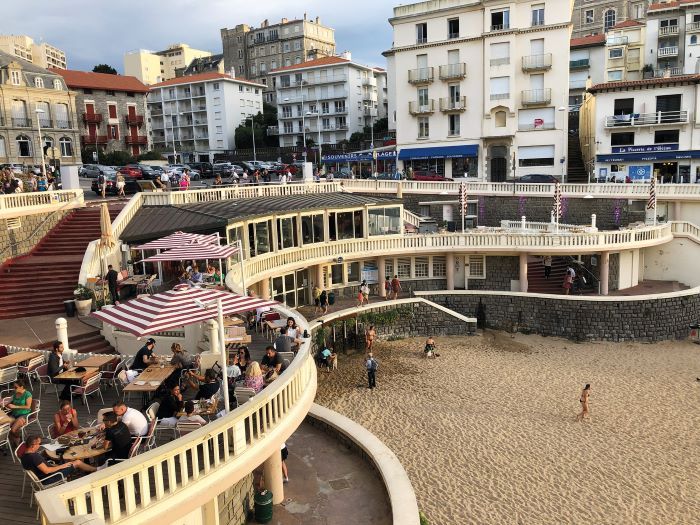 The adventurous residents of Biarritz – les Biarrots – were already into sea bathing in the early 17th century, but it wasn’t until the 1840s that personalities like Victor Hugo came to try it for themselves. Eleven years later, Emperor Napoleon III and his Spanish wife Eugénie placed Biarritz firmly on the Society map by commissioning a sumptuous summer palace, the Villa Eugénie, on the seafront. Here they entertained the movers and shakers of the age.

Fast forward to the 20th century and top couturiers like Paco Rabanne and Coco Chanel opened workshops, whilst big name visitors included the likes of Rita Hayworth, Frank Sinatra, Gary Cooper and Bing Crosby. Head north from Port des Pêcheurs and you can’t miss Napoleon III’s grand holiday home, positioned with its toes in the sand of the sweeping Grand Plage. Now it has a new lease of life as the opulent Hôtel du Palais, location for the G7 Summit in 2019, and recently reopened after a lavish refurbishment. It’s one of several Biarritz hotels to have put the 2020 closures to good use. 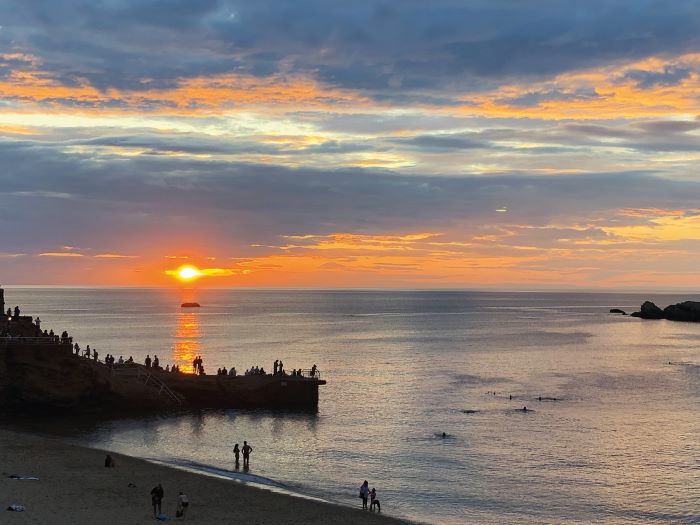 Sunset over the Vieux Port from L’Arena. © Gillian Thornton

Today Biarritz seamlessly blends its Imperial past with a cool, California-style beach culture. Hug the broad arc of the Grande Plage, adorned with striped bathing huts in high season, to see a mix of happy families, cosy couples and surf dudes. The unmistakeably Art Deco façade of the casino now hides a congress centre and public swimming pool, as well as gaming tables. But even if you can resist the pull of the roulette tables and slot machines, I wouldn’t try too hard to resist a drink inside the Hôtel du Palais, if only to see how the other half live.

Beyond its elegant façade, the Plage Miramar is popular with locals, running out before the whitewashed lighthouse on Cap Hainsart. Climb the steps to the top or simply soak up the bay view from ground level. North of the headland lies Anglet, a residential area offering mile upon mile of sand, sea and surf. But retrace your steps past the Port des Pêcheurs to Pointe Atalaye and there are more treats in store. On the way, take a short detour behind the Casino, across Avenue Edouard VII – named after the British monarch and Biarritz devotee – and into the narrow Rue des Cent Gardes to visit the Imperial Chapel. Built in 1864, it’s an eye-catching blend of Roman-Byzantine and Hispanic-Moorish styles.

South of Port des Pêcheurs, the Esplanade des Anciens Combattants faces out to the Atlantic and the Rocher de la Vierge, named after the statue of the Virgin that was erected in 1865. Napoleon III planned to use the rock as an anchor for a sea wall of his planned Port de Refuge, connecting it to the land by a wooden bridge, but the harbour was never built and the remaining money was used instead for the fishing harbour. The wooden bridge was replaced by a more robust version and today this is a delightful spot to watch the waves on a calm summer evening. It’s best avoided, though, on stormy days when breakers crash dramatically over the sacred lady.

Set back behind the war memorial, the Art Deco façade of Biarritz Aquarium is deceptive. Walk through the original sea life museum to the stunning modern addition that presents Gulf Stream species from the Bay of Biscay to the Caribbean and Indo-Pacific seas. 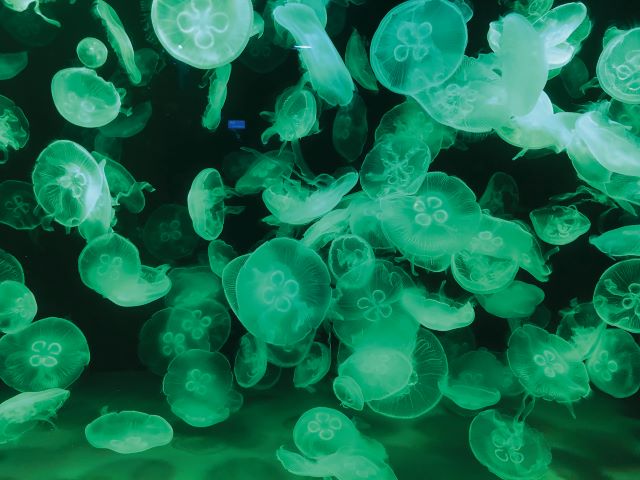 Don’t know your spiny starfish from your blackbelly rosefish, your streaked gurnard from your dreamfish? You soon will. It is probably my favourite aquarium anywhere and this year a new rooftop bar, Olatua, offers panoramic coastal views.

Follow the Esplanade de la Vierge round the headland to drop down into the sheltered horseshoe-cove of the Port Vieux where the unfortunate whales were once cut to size. Today it offers safe swimming and glorious sunsets. Book a terrace table at L’Aréna for a front row view.

One more wiggle in the coast road and you emerge on the headland above Côte des Basques beach, a sacred spot for surfers who ride the waves here throughout the year. Surfing arrived in Europe via this beach in 1957, thanks to Hollywood screenwriter Peter Viertel, who was in town to film The Sun Also Rises, and was so impressed by the waves he sent for his surfboard from California. Today Biarritz still hosts international surfing competitions.

But just as surfing is in the DNA of many a Biarrot, so too are rugby and the Basque sport of pelota. Several local bars and restaurants are run by former rugby internationals and you’ll even find the odd sporting hero immortalised on an urban mural. But to really understand Basque sporting passions, book a ticket for one of the many versions of pelota, a high-octane sport played indoors and out with a leather glove, wicker basket or just the bare hand.

The beating retail heart of Biarritz is just a short walk from its surf centre. On the way, look out for some of the grand 19th-century villas such as Villa Belza, close to Port Vieux, and Villa Larralde near the casino, home to one of Coco Chanel’s haute couture workshops during the First World War. 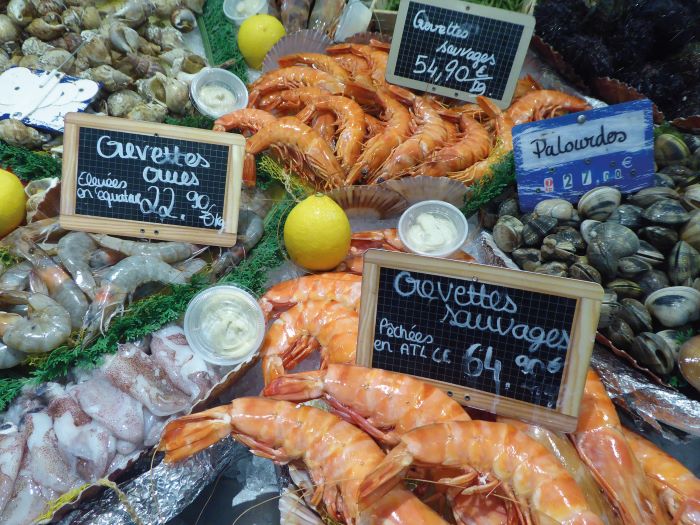 And once you’ve seen the landmarks, fill in the gaps with a visit to the Musée Historique, which charts the town’s development from small fishing harbour to Society seaside resort and surf capital of Europe. Perhaps book one of the new thematic guided tours available from the Tourist Office, centrally located in Villa Javalquinto, scene of many a Belle Époque party. Or just follow the annotated walking trail launched this year to link nine iconic buildings. Biarritz offers abundant temptations for shoppers, typical local products being home furnishings, shopping bags, and espadrilles in traditional striped Basque linen. And don’t miss Les Halles, an indoor covered market that positively oozes aroma, atmosphere and Basque identity, the stalls hung with flags in the region’s signature red and white colours. Cured Bayonne ham and jars of piquant Espelette peppers make good, easily transportable souvenirs.

Then just relax at a pavement café over a slice of scrumptious gâteau Basque, traditionally filled with jam or crème patissière. After all that sea air, you’ll have earned it!

For more information and to plan your visit, go to tourisme.biarritz.fr/en

Short on time? Check out our selection of the very best Biarritz has to offer. 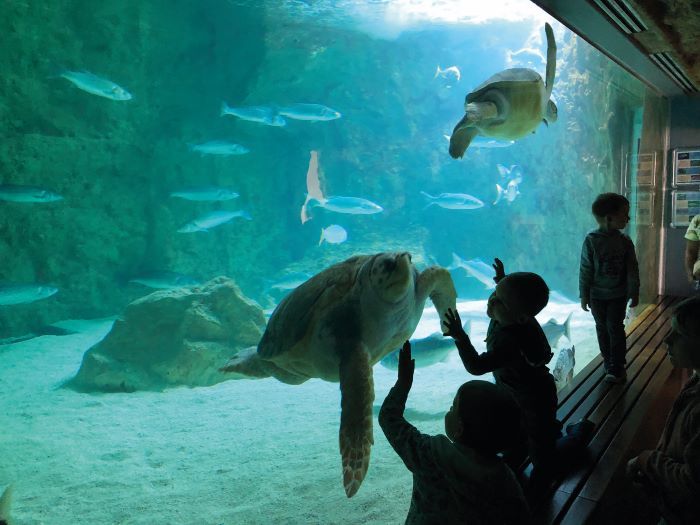 BIARRITZ AQUARIUM
More than 50 tanks include a giant tank with sharks, ray and tropical fish, plus an indoor viewing tank and open-air area for seals. Open daily, including evenings in July and August. Also, discover the secrets of the ocean at Cité de l’Océan, an interactive scientific discovery centre for all ages on the edge of town. www.citedelocean.com 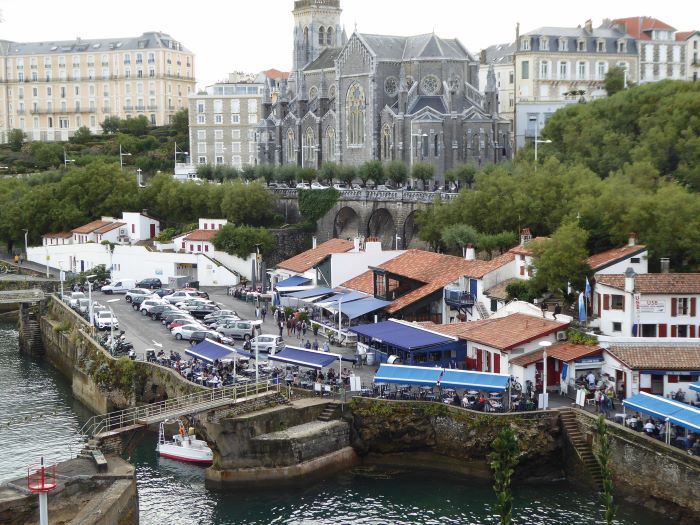 PORT DES PÊCHEURS
Tucked at the foot of a cliff beneath Sainte-Eugénie church, this quaint harbour is a pretty stop for al fresco dining with atmosphere. Expect old painted cottages, fishing boats, and pleasure craft. 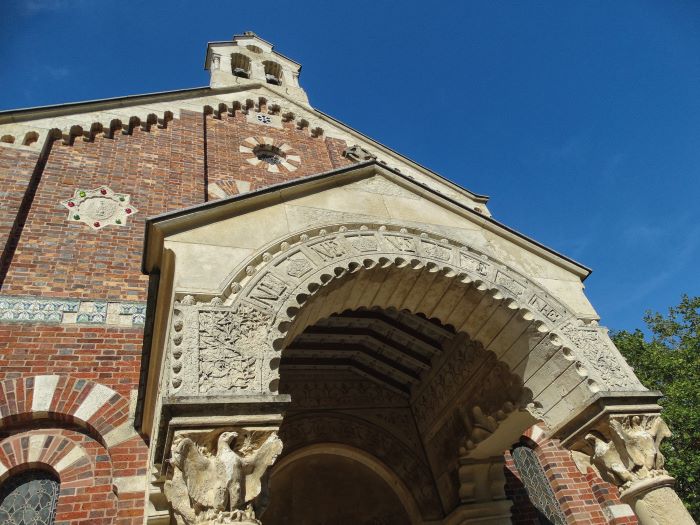 IMPERIAL CHAPEL
Built in 1864 for Empress Eugénie de Montijo, wife of Napoleon III, in a mix of Byzantine and Moorish styles. it was dedicated to the black Mexican saint Notre-Dame de Guadaloupe and was classified as a historic monument in 1981. 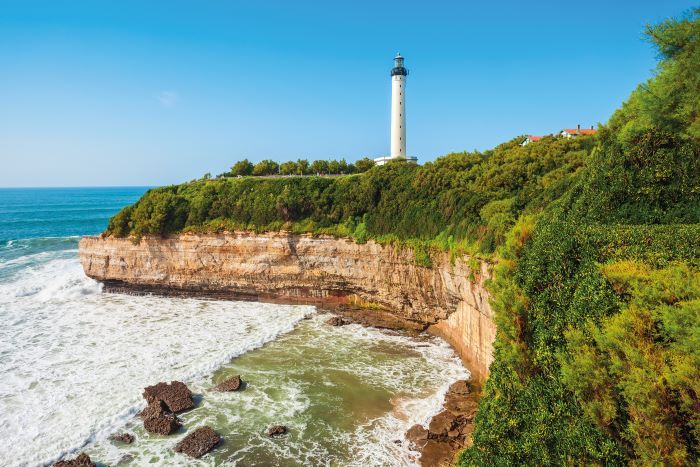 BIARRITZ LIGHTHOUSE
Built in 1834 on Cap Hainsart, 73 metres above sea level, it separates the sandy coast of Les Landes with the rocky coastline of the Pays Basque. There are panoramic views for those hardy enough to tackle the 248 steps. 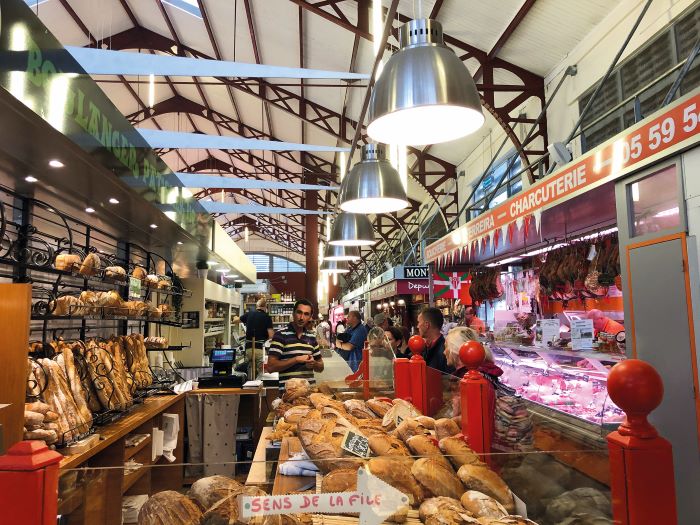 LES HALLES
Completely renovated in 2015, it is packed with high-quality produce stalls, decked out in signature red and white Basque colours. Cafés and bars, inside and out, make this a focal point for locals and visitors. Open daily except Mondays in low season.

Previous Article 12 Essential Visits in Gers in 2021
Next Article A Cup of the Strong Stuff: Honoré de Balzac’s Coffee Habit