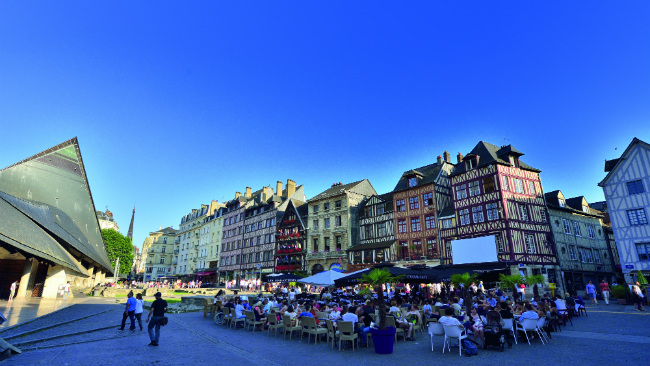 Easily accessible from the south of England, and once a seat of the Anglo-Norman dynasties, this regional capital has various glories, both modern and ancient, to woo the visitor, says Robert Spellman

One of the first things I learned on arriving in Rouen was how to pronounce the word like a local. All the Brits I’ve met use the double vowel: “Rou-en”. But the two syllables should be briskly voiced as one, and the “r”, a fricative consonant, is pushed roughly from the back of the throat. With this to practise, I felt a little more established in Normandy’s capital. 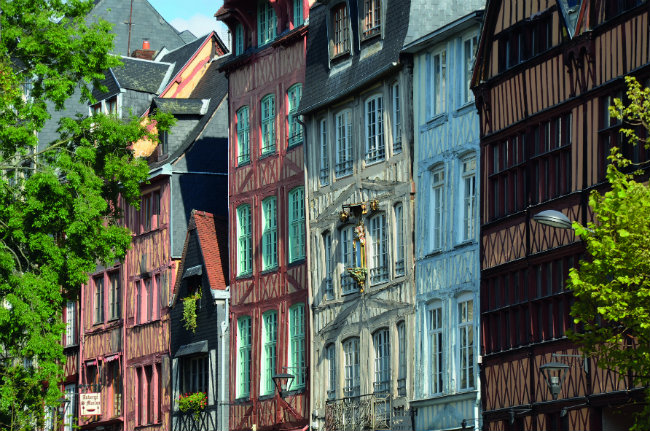 If this is as brisk as Rouen gets, it is also a great draw. One comes to inhale the deep history, marvel at the timbered housing of its medieval byways and visit some excellent art galleries. The star attraction here has to be Rouen Cathedral (Notre-Dame), the 12th-century Gothic wonder famously painted by Claude Monet. And soaking up the vast, rib-vaulted gloom of its interior is a must. 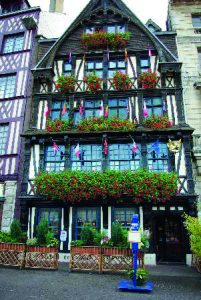 Book a table at La Couronne and you can combine history with appetite. The restaurant, founded in 1345, claims to be France’s oldest inn. Diet permitting, you can feast on a shamelessly old-world dish, Rouen duckling – caneton à la rouennaise – which is cooked at your table in port, cognac and red wine, the animal’s blood, pressed liver and heart. The restaurant was a big hit with the giants of old Hollywood and their signed portraits adorn its many floors.

If La Couronne is one of Rouen’s gastronomic stars, there are some notable human ones too. Off the old town square, the place du Vieux-Marché, where the restaurant sits, is my base, Hôtel Littéraire Gustave Flaubert. The author was born in Rouen in 1821 and began work on his debut novel, Madame Bovary, in 1850 in nearby Croisset, where he lived until his death in 1880. His birthplace can be visited at 51 rue de Lecat, which is a literary and medical museum (Flaubert’s father was a doctor) and features curiosities such as a six-patient bed and a “leech perch”. 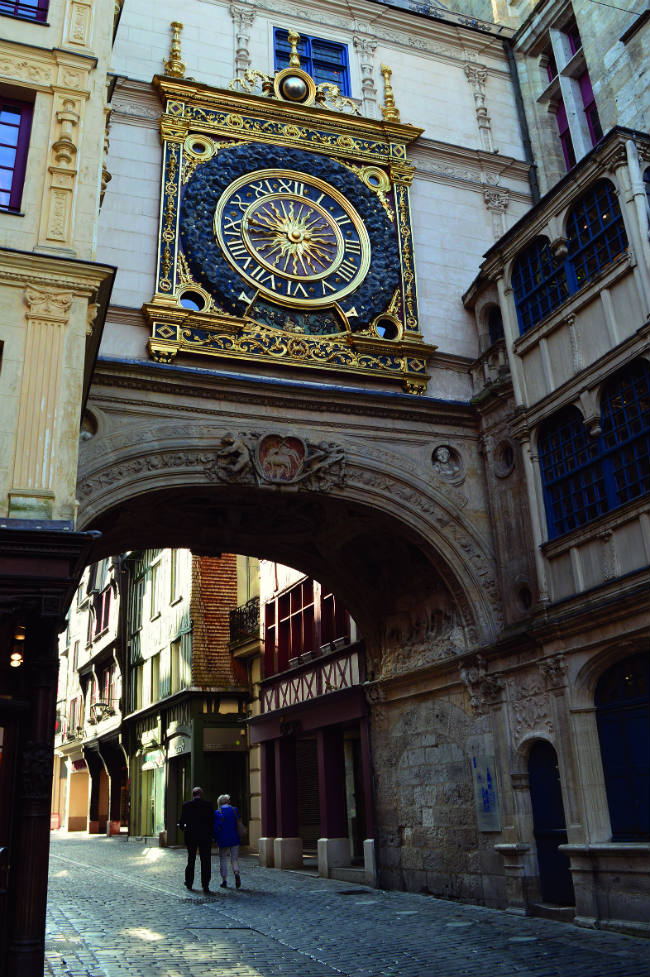 Back on place du Vieux-Marché, a darker legend is commemorated in the form of a 100-foot cross. This marks the spot where prisoner of war Joan of Arc was burnt at the stake for heresy by the English during the Hundred Years’ War. Don’t be put off entering the rather ugly Église Sainte-Jeanne-d’Arc next to it. Built in the late 1970s, the roof’s sharp curves reference the flames that engulfed the 19-year-old. But inside, the stained-glass windows from the ruins of the nearby 16th-century church of Saint-Vincent are breathtaking. The windows were saved before Luftwaffe bombs destroyed that building in 1944. 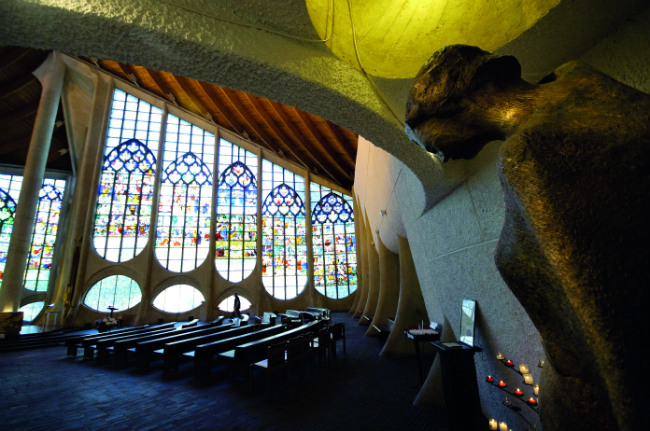 The Church of Joan of Arc is of modern construction, but the stained-glass windows are 16th century. Photo: Normandy Tourism

Just north of Notre-Dame, on rue Saint-Romain, is the excellent Historial Jeanne d’Arc museum, where her extraordinary story is told holographically, right up to her posthumous pardon in 1456. Visitors view screens in a succession of rooms and the medieval buildings encompass a dungeon where she was threatened with torture and the Archbishop’s Palace, where her trial took place. 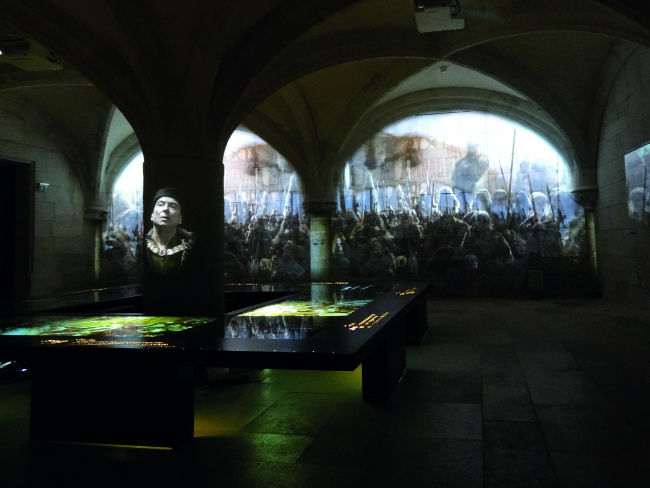 The terrifying 1824 painting Joan of Arc is Interrogated in her Prison Cell by the Cardinal of Winchester by Paul Delaroche hangs in the impressive Musée des Beaux-Arts. The museum itself sits on an esplanade named after a different sort of heretic: the Dada artist Marcel Duchamp, whose early schooling was in Rouen. The galleries are usefully themed The Renaissance, Romanticism, Baroque Europe, Sculpture and so on, and boasts works by Rubens, Caravaggio and Velázquez, and Sisley, Pissarro and Monet. 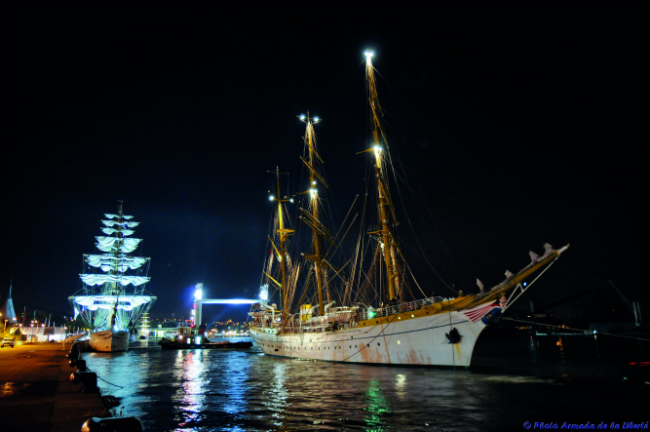 The Armada in Rouen

These are staples of Rouen, but this June, the Armada de la Liberté will return to the banks of the Seine for its seventh edition. For 11 days (from June 6-16), historic vessels will gather in the city for one of the world’s greatest nautical events. As I walk the deserted quays, the spring skies have a faint blush of anticipation and it isn’t difficult to picture the forthcoming maritime invasion. And of course, when it comes to invasion from the sea, the capital of Normandy has seen it all before. 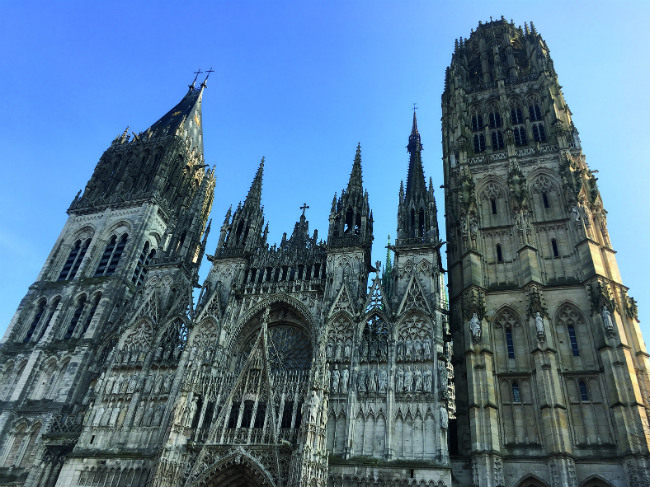 The Vikings arrived here early in the 10th century to become the first rulers of Normandy. The Viking Rollo, the first Duke of Normandy – and, apparently, a man too big to ride a horse – is believed to be buried on the site of the cathedral, although his remains still evade the diggers. As a trading port, the city enjoyed a boom period during medieval times and much ecclesiastical building took place – later prompting Victor Hugo to dub Rouen “La ville aux cent clochers”, the town of a hundred bell towers. 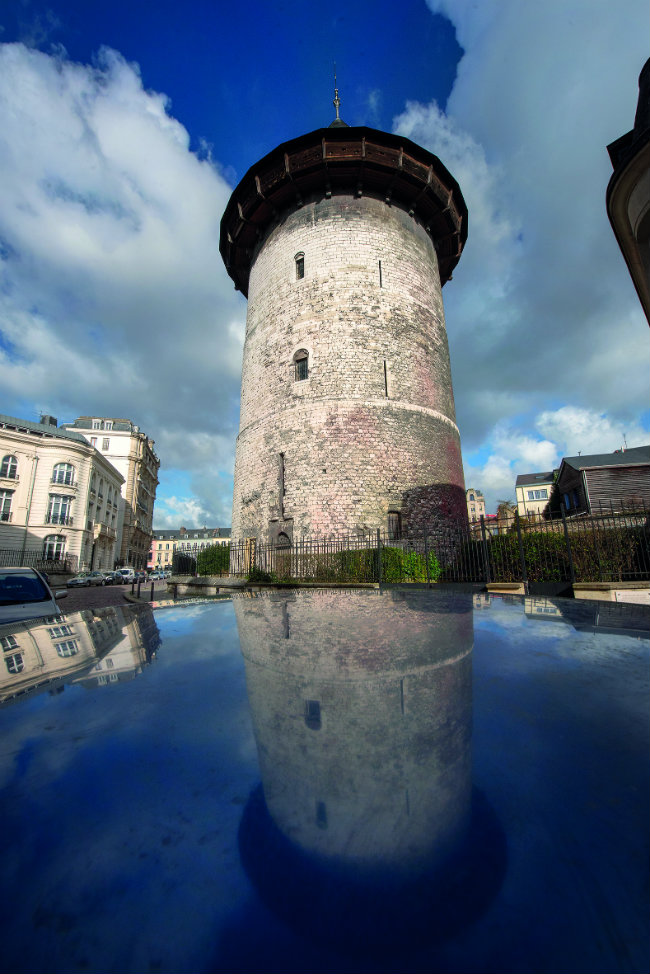 The Armada festivities will begin with the opening of the Flaubert Bridge and a world-class parade of “ship-rigged” vessels featuring Germany’s Kruzenshtern and Alexander Von Humboldt, France’s Belem, Belle Poule and Étoile and Portugal’s Santa Maria Manuela. Warships and other unique boats will sail and there will be concerts, crew parades through Rouen involving some 6,000 sailors, and firework displays. On the weekend of the 8th and 9th, there will be a traditional “Seafarers’ Mass” animated by a chorus of 700 children. Thousands of people are expected to attend. 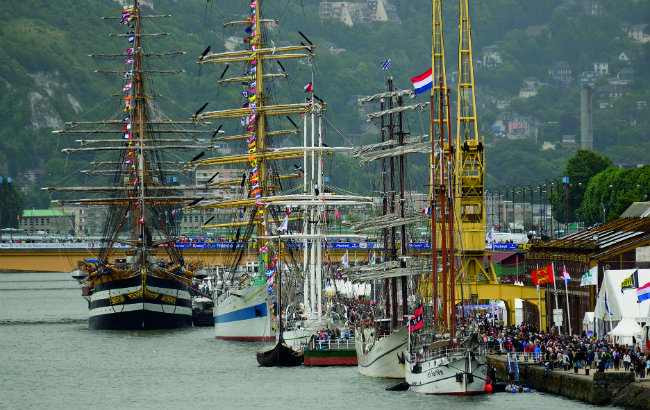 Ideally situated nearby on the river is the breathtaking Panorama XXL. Aimed primarily at children, this is a giant, indoor, 360-degree panorama that visualises everything from historical epochs to scenes from nature using painstaking illustration and digital photography upon the 32-metre-high surround. This year’s shows are Amazonia and Titanic.

For brunch or lunch the greatest concentration of eateries is in the area between rue Saint-Romain and rue Damiette, on either side of rue de la République. On the former, the Dame Cakes tea salon serves sweet and salty pastries and tarts amid Louis XV décor – the view of the cathedral on the upper floor is wonderful. On the latter, I picked Tavola Calda Bistrot and was delighted by an Italian crossover lunch. There are a number of such places where a window seat is the ideal perch for a bite to eat, a drink, and that most French of pastimes: people-watching.

Getting there
BY AIR: There aren’t many reasons why you would choose to fly to Paris-Beauvais for any consideration other than price, but a trip to Rouen would be one.
BY SEA: A ferry to Le Havre or Dieppe would put you within easy striking distance of the city.
BY ROAD: Rouen is a little over an hour from Paris on the A13.
BY RAIL: The train from Gare Saint-Lazare to Rouen takes about 1 1⁄2 hours. 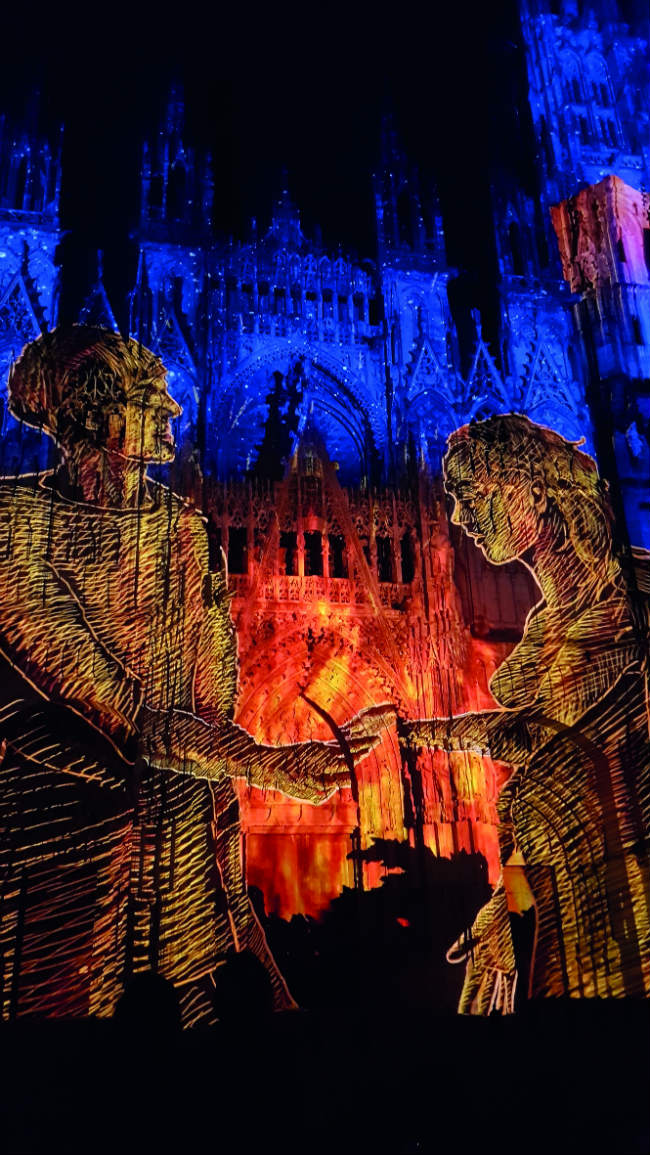 The 11-day Armada de la Liberté will see a fleet of vintage vessels arrive in Rouen for one of the world’s greatest maritime events. Held every five years, this June will mark the seventh edition of a festival that has been celebrated here since 1989.

This is one of the most significant churches in France. There has been a church on this site since at least the 4th century, and the Gothic masterpiece that stands here today was begun in the 12th. Since then it has withstood (to varying degrees of success) fire, storms, lightning strikes and wars. It has been depicted by artists as diverse as Claude Monet and Roy Lichtenstein.

France’s oldest inn dates back to 1345 and is a wonderfully cosy and creaky place to have dinner.This is where American chef and food writer Julia Child had her rst French meal. Signed photos of Humphrey Bogart, Marilyn Monroe and Salvador Dalí hang on the walls.

This interactive museum tells the story of France’s great heroine holographically, from her early life in Domrémy to her trial in Rouen and execution on the nearby place du Vieux-Marché. The museum site encompasses a dungeon where she was held and the Archbishop’s Palace, where she was tried.

A 32-metre-high cylindrical construction on the banks of the Seine uses panoramic illustration and digital photography to bring to life scenes from the past and present. Opening in June is Titanic: the Promises of Modernity. 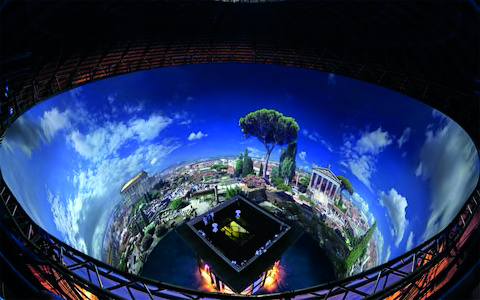