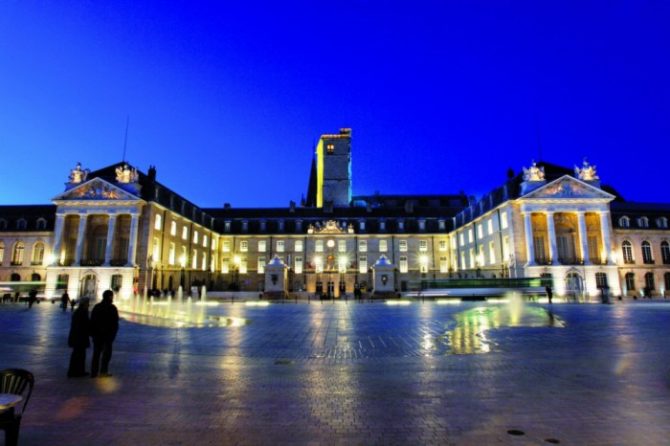 Dijon, capital of Burgundy, was once considered a quaint but rather sleepy provincial city with a proud history and a reputation for traditional, hearty food. But under the direction of Mayor François Rebsamen the last decade has seen something of a transformation. Today the city boasts a vibrant cultural scene which challenges the old perceptions of bourgeois conservatism head-on. Inevitably, many visitors will prefer the appeal of the historic centre, to wander through its old streets and emerge at the spectacular focal point of the renaissance Ducal Palace.

However, there are now such rival attractions as the new contemporary art space at Le Consortium, which is a hub of Dijon’s burgeoning art scene, and no less than four Michelin-starred restaurants. And there are other encouraging signs of cultural and architectural re-birth: a shiny new tram system, traffic reduction measures in the city centre and the pedestrianisation of important public spaces.

Add in a kaleidoscope of new cultural events and some impressively eco-friendly buildings and you have a very different, more cosmopolitan vibe than in the past. Consequently, there’s never been a better time to visit or re-visit this iconic French city.

Little architecture survives from the time of the great Dukes of Valois but the Tower of Philippe le Bon, which dates from 1460, is an impressive exception. This is the perfect spot to get your bearings because, after you have climbed the 316 steps to the top, you’ll be rewarded with panoramic views of the city and its many attractions.

The next stop is the immaculately preserved Palace of the Dukes and Estates of Burgundy, which stands proudly in the Place de la Libération. This grand space houses the town hall and the Musée des Beaux-Arts de Dijon, a must-visit treasure trove of many fine paintings, drawings, sculpture and decorative arts, from Egyptian times to the 20th century. Afterwards, you can rest your museum-weary feet either at the on-site courtyard restaurant or at one of the cafe terraces on the Place de la Libération, which is newly-pedestrianised and blanketed with white Comblanchien stone.

One simple pleasure is to meander through the romantic cobbled streets of the old quarter, with their picturesque half-timbered buildings. Look up to see the famous toits Bourguignons, the polychrome terracotta-glazed roof tiles arranged in geometric patterns. A great example is the Hôtel de Vogüé, which is one of the city’s many 17th- and 18th-century hôtel particuliers.

Follow the Rue de la Chouette to discover charming antique shops and, soon enough, you’ll catch a glimpse of the Notre Dame Cathedral. A visit to Notre Dame in Dijon means you have journeyed even further back in time to the era of the majestic Gothic cathedrals. Work on this architectural masterpiece began in 1230AD, during the time of the Burgundian Duke Hugh IV. Within the cathedral sits the statue of the virgin, Notre Dame d’Espoir. In September 1944, when Dijon was still stubbornly occupied by the Germans, a ceremony took place at Notre Dame which saw the then Bishop of Dijon make a public plea to the virgin to protect the town. Amazingly, that same night and the next day, under pressure from French forces, the Germans abandoned the city.

Good food made from fresh local ingredients is at the heart of Burgundian gastronomy so where better than the region’s capital city to indulge yourself? Even if you don’t have time and space to cook for yourself, a visit to the wonderful covered market at Les Halles, with its vaulted ceiling by a certain Monsieur Gustave Eiffel, will set your taste buds tingling. Dijon’s fabled local produce includes truffles, Bassou snails, rosette salami, Bresse chicken, Gatinais honey, Charolais beef, Epoisses cheeses and pain d’épices.

Once your appetite is whetted, there are numerous excellent city-centre restaurants serving traditional Burgundian cuisine, such as coq au vin, boeuf bourguignon and oeufs en mourette. If your budget allows, then Dijon’s aforementioned Michelin-starred establishments offer more refined fare. Of course, it would be a shame not to start your meal with a Kir Royale – named after Canon Félix Kir, a hero of the French Resistance during World War 2 and Dijon’s mayor from 1945 to 1968.

To follow, well, we hear that the local red and white wines are quite good!

On the Culture Trail

With its new-found zest, there is always something going on in the city – visit the Dijon Tourism website for an up-to-date guide to events and festivals. Each summer, the city resounds to the beat of free concerts. Folk and jazz enthusiasts will enjoy concerts in the parks and gardens during June’s 40th Estivade event, while July 3-5 brings the 9th Festival Dièse of multi-media, multi-disciplinary art and music in the historic part of the city. September sees the famous flea market, and come October it’s time for the vendange and a chance to venture out and follow the Route des Grand Crus wine trail.

Last but not least, leave space in your bags for local souvenirs that your friends and family will love – a bottle of crème de cassis de Dijon, the classy blackcurrant livener for a dry white wine or with Champagne in a Kir Royale, and a jar of world famous moutarde de Dijon.

Guy travelled by train to Dijon with thanks to www.voyages-sncf.com