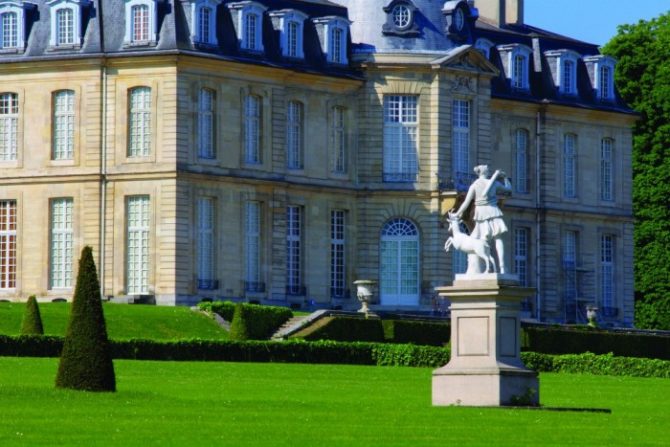 Madame de Pompadour, Marcel Proust and a young Prince Philip have – respectively – lived, slept and played at this magnificent French castle. But if you were to guess that the château in question is Versailles or the fairytale Fontainebleau, you’d be incorrect. It was actually the little-known Château de Champs-sur-Marne, in the verdant Seine-et-Marne département some 18 kilometres east of Paris, which in its heyday played host to the aforementioned visitors as well as many others.

This 18th-century architectural gem was built in a classical style typical of its era – its avant-corps or front projection is said to have inspired that of the Élysée Palace – and it’s one of the region’s rare properties to have both a perfectly preserved house and gardens. The Château de Champs-sur-Marne was built between 1703 and 1707 for Paul Poisson de Bourvallais, a prominent financier during Louis XIV’s reign, by father and son architect duo Pierre Bullet and Jean-Baptiste Bullet de Chamblain. In around 1716, Poisson de Bourvallais found himself in the Bastille facing charges of embezzlement and the château was seized by the crown.

It was then sold to Louis XIV’s daughter, the Princess de Conti, who gifted it to her cousin, the Duke de la Vallière, in order to cancel a debt. Between 1757 and 1759, the Madame de Pompadour, the official chief mistress of Louis XV, made the castle her private residence. During the French Revolution, the estate was seized once again and passed through many hands before Count Louis Cahen d’Anvers purchased it in 1895 and oversaw extensive restoration work.

In 1935, his son Charles donated the property to the state, on two conditions; the château and its furniture must remain exactly as they were at the time of handover, and that the estate’s 63 gardeners, 18 domestic servants, 11 gamekeepers and 50 or so farmers be guaranteed their jobs and lodgings. With Champs-sur-Marne now an official residence of the French President, dozens of world leaders were guests at the château during the 1950s and 1960s. Foreign heads of state, such as Senegal’s Leopold Sedar Senghor and the King of Morocco Hassan II, stayed there but this was nothing new.

Throughout its history the château has hosted many famous guests, from writer Marcel Proust and Alfonso XIII, the King of Spain, to dancer Isadora Duncan and Prince Philip, the Duke of Edinburgh (husband of Queen Elizabeth II), who visited Champs-sur-Marne as a child.

Today, ‘Le Petit Versailles’ is back in the spotlight, following a €6 million renovation. Fungal decay had caused a ceiling to collapse in 2006, forcing the château to shut its doors for seven years but after a complete restoration, it reopened in June 2013. For its grand comeback, a handful of rooms previously closed to the public were revealed, previously unseen pieces of antique furniture unveiled and brand new digital touch tablets scattered throughout, in order to provide visitors with detailed historical information in French, English and Spanish.

Among the newly-opened rooms are the upper floor bathrooms, the ground floor service corridor and the adjacent children’s dining room. The latter was actually used as a bathroom during the 18th century, before being converted into a salle à manger for young nobles. It features faux marble stucco by renowned plasterer-to-the-king Louis Mansiaux and is the only surviving example of this type of 18th-century decor in the world. Other new discoveries to be made by visitors include the enlarged collection of period furniture – some 700 pieces are now on display, compared to 500 prior to the closure – meaning that the château now boasts one of the largest displays of antiques in the region.

The highlights of Champs-sur-Marne include the majestic music room on the upper floor, overlooking the landscaped gardens, and the sombre smoking room, which was traditionally men-only and reserved for the post-dinner ritual. Awash in dark woods, the smoking room sits in stark contrast to the rest of the castle’s gilded, ornately decorated rooms, such as the grand bedchamber, with its Duchess bed and balustrade, yellow silk walls and intricate wood panelling featuring sculpted palm trees, cherubs, doves and peacocks, which was reserved for distinguished guests.

Of the château’s original six bed chambers, four remain, the other two were eventually converted into salons. However, the absolute must-see room at Champs-sur-Marne is the salon Chinois, a beautiful example of the popular Rococo decoration style of the period. In this important reception room, the delicate Chinoiserie decor – created sometime in the 1740s by painter Christophe Huet – represents an imaginary Far East, while the Louis XV lounge and armchairs were bought by the Cahen d’Anvers family to complement the exotic artistic style featured on the walls.

Of the 600 hectares of agricultural land, gardens and hunting forests which once fell within the estate’s borders, only 85 hectares remain today, much being sold off over the years. Claude Desgots, the nephew of famed landscape gardener André Le Nôtre – who was responsible for the gardens at the castles of Versailles, Vaux-le-Vicomte and Fontainebleau, among others – designed the garden in 1710, although its original layout was altered by the château’s owners over the succeeding years. In 1895, landscaper Henri Duchêne redesigned and modernised the outdoor spaces, restoring the gardens to their former glory.

In 2004, Champs-sur-Marne’s combination of French formal and English landscape styles earned it a Jardins Remarquables designation from the French Ministry of Culture, placing it among the country’s 300 most beautiful green spaces. Featuring a multi-tiered central axis which is almost 900 metres-long, the gardens trickle all the way down to the Marne River. For some of the finest views of the gardens, head to the upper floor of the château, and take in the spectacular panorama through the floor-to-ceiling windows of the music room.

Perched along the garden’s central path are two water basins, the Great and Scylla Pools, the latter copied from a design by important 17th-century French painter Charles Le Brun, who was deemed “the greatest French artist of all time” by Louis XIV. It features a lead sculpture that depicts the nymph Scylla’s transformation into a monster. Also dotted throughout the garden are several statues, both originals and copies of 18th-century works found in Versailles or Italy, chosen by Champs-sur-Marne’s second-to-last owner, Louis Cahen d’Anvers, to complement the garden’s symmetry.

Among these is the Horses of Apollo, a nine metre-high stone statue that sits at the end of the central axis which is a much larger copy of the Versailles original. A stroll throughout the castle grounds alone can take many pleasurable hours – passing flowerbeds, thickets, box-tree ‘embroidery’ (where foliage is presented in coiled shapes to imitate an oriental carpet), an orangery and a vegetable garden. The sprawling meadows reflect the fact that, until it was handed over to the state, the château was essentially a country retreat, one where – as with the more famous estate of Versailles – hunting was an important activity.

Through the years, Champs-sur-Marne has featured in over 80 films, including Dangerous Liaisons (Stephen Frears, 1988) and Marie Antoinette (Sofia Coppola, 2006), each of which should rightfully have earned this most breathtaking château its own ‘star’ screen credit.

How to get there: From Paris, take the RER ‘A’ train to Noisiel le Luzard and then catch bus number 220 to the Rue de Paris, Champs-sur-Marne.

Previous Article Summer in Paris: Our Checklist
Next Article Dijon: The Best City Breaks in France