Enchanting Yvoire on the Shores of Lac Léman

In Haute-Savoie on the shores of the majestic Lac Léman (Lake Geneva), Jan Mitchell discovers the charms of one of France’s Plus Beaux Villages, where time seems to stand still.

As the magnificent Belle-Époque paddle-steamer draws gently closer to the old port, my anticipation heightens. Then, the delightful medieval walled village of Yvoire, in Haute-Savoie, is gradually revealed. With its castle rising majestically at the edge of Lake Geneva, it truly is a magical place. To immerse yourself in its narrow, cobblestone streets, with its ancient stone dwellings, is to go back in time.

I gratefully take the gallant captain’s arm as I alight from the elegant vessel and make my way onto dry land. Yvoire has two harbours: on one side is the fishing port, Port des Pêcheurs, and on the other side is the marina with a promenade, Port de Plaisance.

Yvoire has an enviable location on the French shore of the lake, between Geneva and Évian-les-Bains. A dazzling gem between lake and mountains, it is known locally as la Perle du Lac, with the Alps providing the ideal backdrop for this perfect haven. On clear days, the jewel in the crown, Mont Blanc, is revealed in all its glorious majesty. Everywhere, multi-coloured blooms run along the narrow streets, climbing onto tiled roofs, spilling from window boxes and tumbling over wooden terraces. Hardly surprising then, that Yvoire is classified as one of the Plus Beaux Villages de France and is also a national award-winning Ville Fleurie. The village is pedestrianised, which enhances its relaxed and tranquil feel. As I stroll along the little curved lane leading up to the centre, I notice a delightful shop displaying a stunning array of gifts. My eyes alight upon a delectable parasol in cream lace. After asking the price from the beaming shop owner, then deliberating for two whole minutes, I convince myself that it is exactly what I need for my visit. As I continue on my way, my parasol receives admiring glances from passers-by, which I feel fully justifies my extravagance. 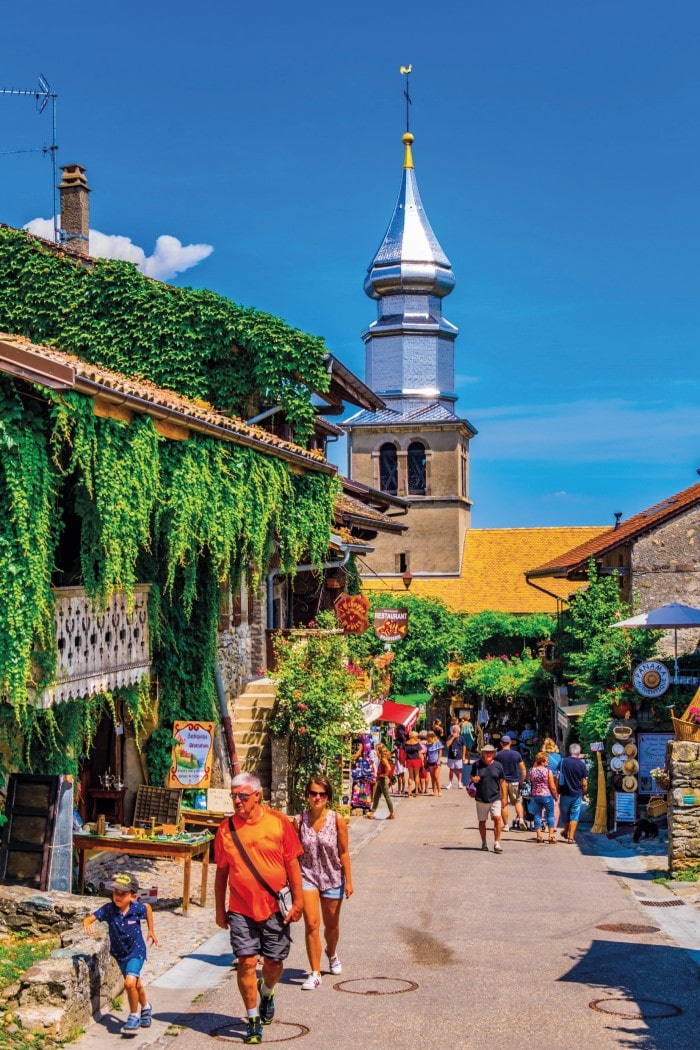 From Farm to Fortress

In its early days, Yvoire was a village of farmers and fishermen, before it assumed an important military role for half a century. It was Amédée V, Comte de Savoie, who decided to make it an impregnable fortress at the beginning of the 14th century. He realised the importance of Yvoire’s strategic location and fortified the village during the war between Savoie and the French province of Dauphiné.

The construction of the castle began in 1306, with its foundations sitting in the lake. Its military purpose was to keep watch on passing vessels and to control the road which linked Geneva to the high valley of the Rhône and to Italy. At that time, there was no way of bypassing Yvoire. The road crossed the village, and two fortified entrance gates, built by order of the Comte de Savoie, controlled passage. The village fortifications of ramparts and gates remain today. The castle has been in the Yvoire family since the 17th century and although beautiful to admire, it is not open to visitors.

The two existing entrance gates are the Porte de Nernier and Porte de Rovorée, both classified as Monuments Historiques. Some of the village houses are built against the ramparts. Looking up, as I walk under the Porte de Nernier, I can see the arrow slits and the level upon which the floor was based. I also notice hinges which remain from the huge wooden gate, which was closed each evening.

The main roadway, Grande Rue, links the fortified gates from east and west. There are three other quaint little roads which branch off from here: Rue de l’Église, Rue des Boulangers, and Rue des Jardins. I follow the first of these and find myself in an enchanting little square, Place du Thay. A sunny seat on the terrace of a nearby brasserie, Le P’tit Cabri, catches my eye and I sink down contentedly. As the friendly waiter takes my order for a grand crème, I enthuse about the quaint roads in the village. He informs me that two other roads, Rue de la Liberté and Rue du Lac, have only been opened through the gardens of Yvoire castle since the 19th century. Thinking ahead for lunch, I then enquire about local specialities. He urges me to sample the fish from Lake Geneva, famous for its perch. Other delights include fera and Arctic char, which have been fished since the 13th century by the lords of Yvoire. Delicious cheeses from the nearby Chablais region of the French Alps, such as Reblochon, are also to be savoured and go well with a glass of Crépy, the local wine. 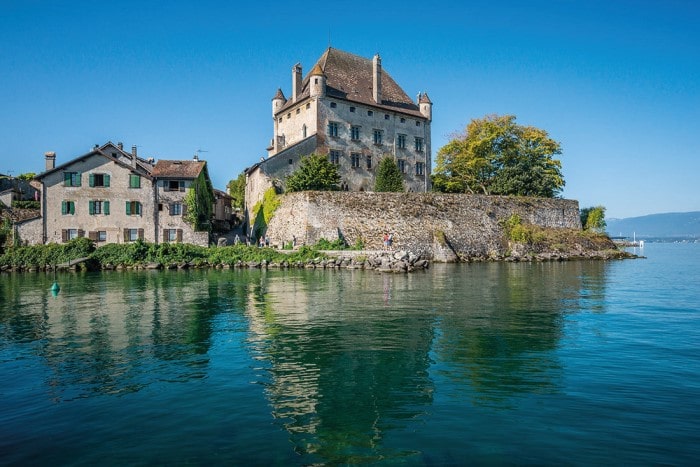 My thirst quenched, I saunter lazily along the Rue du Lac, leading down towards the fishing port, and encounter le Jardin des Cinq Sens (garden of the five senses).

Nestled in the heart of Yvoire, in front of the château, this labyrinth of over 1,300 varieties of plants and flowers changes through the seasons. It is inspired by medieval gardens, in keeping with the spirit of the village. It certainly merits its Jardin Remarquable classification awarded by the Ministry of Culture. Visitors are invited to awaken the five senses: to look, listen, smell, touch and even to taste! Duly intrigued, I immerse myself in plants and fruit trees of each unique area. Each garden has an evocative name, such as ‘Alpine Meadow’, ‘Garden of Touch’ and ‘Cloister of Medicinal Plants’. Plants and trees of every shade of green stand proudly in their places, inviting you to touch their foliage. I am encouraged to brush the back of my hand gently along the Primula Auricula, with its delicate lemon flowers and ear-shaped leaves. I feast my eyes on the deep blue of the clematis, which delights me at every turn. I breathe in the heady perfume of a profusion of vintage rose bushes. They have some competition from the Salvia Elegans (also known as pineapple sage), with its aromatic green leaves giving off a mouthwatering scent of pineapple. 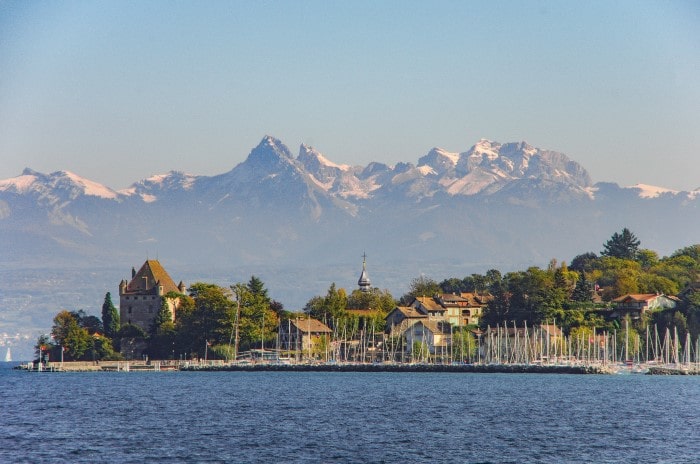 A Haven of Relaxation

As I enter the ‘Garden of Taste’, I am invited to savour some of the delicious fruits growing there by one of the friendly gardeners. His team lovingly tend the many green and flowery occupants of the gardens every day and are eager to answer questions from visitors. He informs me that their motto is the same as that of the Yvoire family: festina lente, which means “make haste slowly”.

Continuing to explore, I then discover a surprising area, where I decide to relax on an inviting bench. I gaze in wonderment at the deep green plant structures which form the cloister. This is my favourite place and provides an ideal space for reflection, with the gentle sounds of birdsong and rippling water tumbling from a delicate fountain in the centre.

Reluctantly taking my leave of the gardens, I continue along Rue du Lac, which leads me enticingly to the shore of Lake Geneva. Known as Lac Léman, it is the largest body of fresh water in Western Europe, stretching for 72km. Lying at an elevation of 372m, with a maximum depth of 310m, it is principally fed by the Rhône, which flows from one end to the other, leaving the lake at Geneva. In 1886, the Geneva dam was constructed to manage the fluctuating water level: in winter and spring, the level of the lake is lowered to allow for the ice melting from surrounding mountain summits.

Eager to immerse myself even further in the village’s past, I make my way slowly back up to the Grande Rue, calling in at La Maison de l’Histoire, which, an enthusiastic guide tells me, was created in 2006 to commemorate the 700th anniversary of Yvoire. I delight at the incredibly detailed models of the castle and the village, and learn about Yvoire’s rich heritage. Archive documents reveal its fascinating history and I linger to peruse the Extente from 1333 (similar to a census) which describes the population, and their houses and cultivated fields.

L’Église de Saint-Pancrace is another classified Monument Historique. It was dedicated to St Pancrace, one of the patron saints of children, and probably dates from the 11th century. It has a small, vaulted chapel and a distinctive bell tower – an onion dome – dating from 1854, replacing the old campanile. It was one of 800 bell towers in the region destroyed during the French Revolution, when they were melted down to build cannons for Napoleon’s army. Reconstructed in1934, the delicate top is covered with gold leaf from the last workshop in France, at nearby Excenevex. During its renovation, the church was expanded onto the ramparts of the fortified village.

As I saunter dreamily back down to the port for the return cruise, I pause for a moment and reflect on my exquisite visit. It really is true what they say: time does seem to stand still in Yvoire. 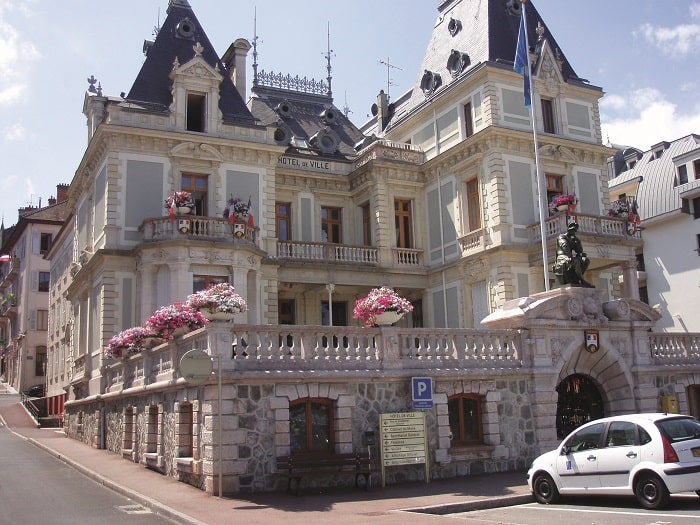 Also worth a Visit…

Rovorée-La Châtaignière is a protected nature area of 24ha, with a lakeside of 1.2km. It is accessible by foot from Yvoire – just follow la voie verte (green path). Its chestnut trees are several hundred years old, and the signposted paths are ideal for walking and relaxation. The Châtaignière Manor sits amidst woods and meadows and houses exhibitions showcasing the cultural and natural heritage of the region.

Recharge your batteries in the elegant lakeside town of Évian-les-Bains, 27km away. Its history as a spa dates back to 1790, when the benefits of its now world-famous mineral water were first revealed. Look out for the Hôtel de Ville, with its neoclassical façade and large bronze copy of The Thinker.

Take a 20-minute ferry ride to pretty Nyon, on the Swiss shore of Lake Geneva. Cruise boats can also take you to Montreux and Lausanne in Switzerland. Contact the Yvoire Tourist Office for ferry times or the Compagnie Generale de Navigation sur le Lac Léman.

GETTING THERE:
Fly to Geneva or alternatively, take the Eurostar to Paris and then the TGV to Geneva. From there, it is a 22km drive or you can take the train to Yvoire.

WHERE TO STAY:
Le Vieux Logis This charming 3-star hotel, complete with vaulted ceilings, nestles in the heart of the village and dates back to 1896. Restaurant serves traditional French cuisine and fresh fish from the lake. Tel. 0033 (0)4 50 72 80 24. levieuxlogis.com/fr