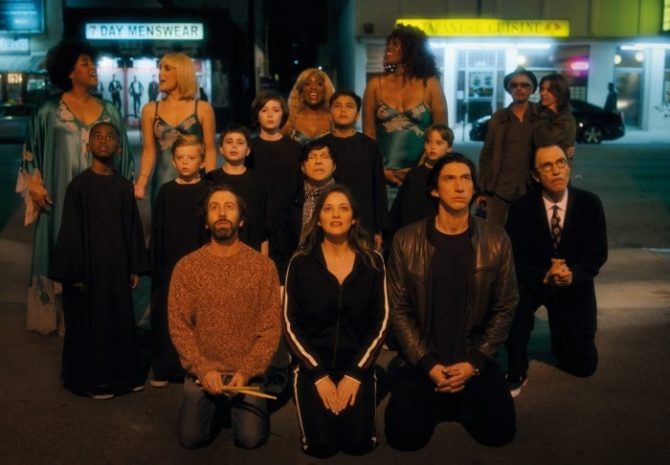 It took seven years of toing and froing between Paris and Los Angeles for Leos Carax and pop duo The Sparks to finesse the rock opera Annette, and at last it was unveiled at the Cannes Film Festival.

Set in contemporary Los Angeles, Annette tells the story of Henry (Adam Driver), a stand-up comedian with an aggressive sense of humour whose star is on the wane, and Ann (Marion Cotillard), a singer of international renown. In the spotlight, they are the perfect couple, healthy, happy, and glamorous. The birth of their first child, Annette, a strange child who can sing with her mother’s adult voice, will change their lives, with Henry, who is becoming increasingly erratic, devoting himself to his offspring as things gradually slide into tragedy.

The movie, Carax’s sixth full-length feature and his first in English, was inspired by an original idea by brothers Ron and Russell Mael, who wrote the screenplay as well as the soundtrack. The unlikely trio was formed after a chance meeting at Cannes in 2013 and the result of their collaboration is bizarre and fantastical, as you would expect of Carax, but captivating too. Annette is almost entirely sung-through, with Driver (remember his show stopping rendition of Sondheim’s “Being Alive” in Marriage Story?) and Cotillard using their real voices, which adds a tenderness that would be lost had they been over-dubbed by professional singers.

The film realises a long-held ambition for Carax, who said he’d always imagined his third film, Les Amants du Pont-Neuf as a musical, but not being able to compose music, had to ditch the idea.

“The musical genre gives cinema another dimension – almost literally: space-time-music,” he said. “And that brings extraordinary freedom… We can summon all kinds of contradictory emotions, in a way that is impossible in a movie where the characters don’t sing and dance. We can be simultaneously grotesque and deep.”