Embark on a coast-to-coast gastronomic journey with Justin Postlethwaite, taking in the foothills and upper reaches of the Pyrénées, from Collioure all the way to the Pays Basque

Draw a line on a map, Mediterranean to Atlantic, from Collioure to Bayonne, and not only do you bisect France’s southwestern tip in the shadow of the mighty Pyrénées, you also create an imaginary coast-to-coast gustatory odyssey that will encompass some truly exceptional food and drink.

This is a culinary corner packed with passionate producers who call the départements of Pyrénées-Orientales, Ariège, Haute-Garonne and Hautes-Pyrénées (all in Occitanie) and Pyrénées-Atlantiques (in Nouvelle-Aquitaine) their home. Surf and turf treats vie for space on your plate here, with fishy specialities and delicious viandes sharing iconic status – often based on decades of finely honed know-how.

BEST IN THE WORLD

Where better to start in the oh-so-picturesque fishing village of Collioure than with the ultimate apéro nibble on a sunny day: locally fished and hand-salted anchovies served on toasts atop a sun-kissed slice of juicy tomato?

Collioure anchovies enjoy a reputation for being amongst the best in the world, and today there remain two traditional companies (conserveries) preserving them in jars and tins: Roque (since 1870) and Desclaux (since 1903). 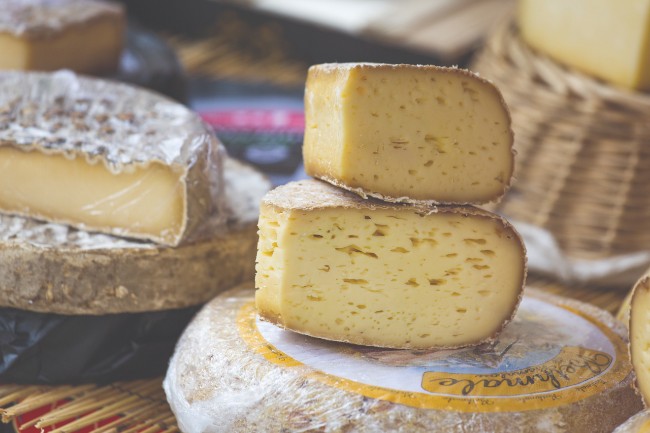 You can buy these fishies preserved in oil or salt. The salted ones are whole and require a little preparation before serving: remove the median and small lateral bones, then soak in cold water for about 30 minutes before draining, drying and serving. Anchovies in oil can be served as they are.

These two firms create other apéro-time goodies, including anchoïade, a tapenade-like spread whipped up with capers, oil and garlic. Pop into their outlets and you can try their products before you buy.

Made not far from Collioure, along the coast, on the sea-facing slopes of the historical Roussillon region (now part of the Occitanie super-region), Banyuls is a French appellation d’origine contrôlée fortified apéritif or dessert wine. Its production involves a process called mutage, a bit like that used for making port, in which the fermentation process is halted by the addition of distilled alcohol to kill the yeast so that the grape sugars remain.

A notoriously scrummy food match for Banyuls, which is around 16 per cent proof, is chocolate; but it also pairs well with berry-based desserts (seek out Céret’s rich red cherries) and caramel too.

Talking of desserts, synonymous with the French Catalonia region that corresponds to the current Pyrénées-Orientales département is crème catalane, a baked thick cream scented with lemon zest and cinnamon and topped with caramelised sugar. (Like crème brûlée, only lighter.) Keep an eye out, too, for rousquilles, soft, ring-shaped treats made with crumbly biscuit pastry and covered with lemon- or aniseed-flavoured icing. 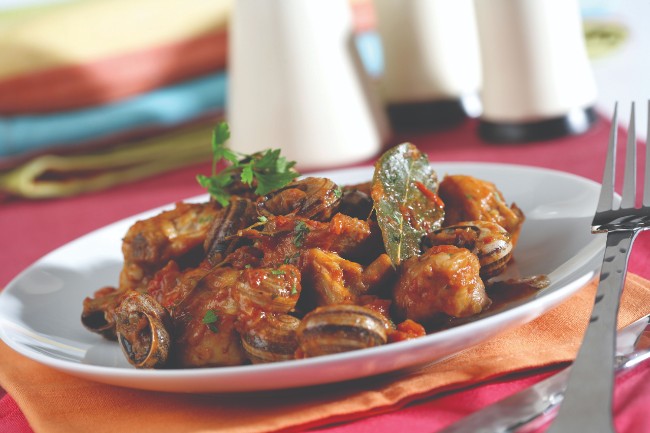 Top of the table when it comes to stews, however, is the Béarn (the historical southwestern region) staple la garbure. A slow-simmered mix of ham (preferably jambon de Bayonne), cabbage, potatoes and other vegetables, plus haricots tarbais, it is celebrated on the first weekend of September in Oloron-Sainte-Marie in the Pyrénées-Atlantiques at the “world garbure championships”, called La Garburade.

For fromage fans, the verdant foothills of Ariège are the place to source the region’s favourite cheese, the semi-hard and fairly mild Bethmale, made in the village of the same name. Source it at the market that takes place in Saint-Girons every Thursday and Saturday. Other unmissable cheeses are la tomme de brebis des Pyrénées and le Pic de Calabasse, while further north in Basque-Béarn country the better known – and AOC-labelled – Ossau-Iraty ewe’s milk cheese is the brebis of choice.

Moving into the mountains, way up in the Hautes-Pyrénées, the département has its own version of gâteau à la broche, a batter-style dessert spooned on a spit in an open fire. Saint-Lary-Soulan has speciality shops selling it, while Arreau lays on an annual celebration. Elsewhere, for the sweet-toothed, the ski resort of Cauterets is home to the famed berlingot candies. Their sweetness was historically appreciated by visitors to the local spa because it helped to disguise the taste of the thermal waters!

Heading north, in the direction of the Pays Basque, for curious carnivores there is an AOC meat product to sink your teeth into: porc noir de Bigorre. Native to the Bigorre, an area bordering the Hautes-Pyrénées, Gers and Haute-Garonne, this breed of pig was brought back from near-extinction to become one of the most sought-after by top chefs and canny gourmands alike.

La Ferme de Luis is where Armand Touzanne has dedicated more than 35 years to rearing the endangered native race of the Pre-Pyrénées. In 1981 there were only two males still alive, but Armand realised that by producing pork with a distinctive flavour, using traditional rearing techniques, he could find a market for his meat – his pigs feast heartily on grass, chestnuts and local fruit and vegetables, and their fat is known to be very digestible. 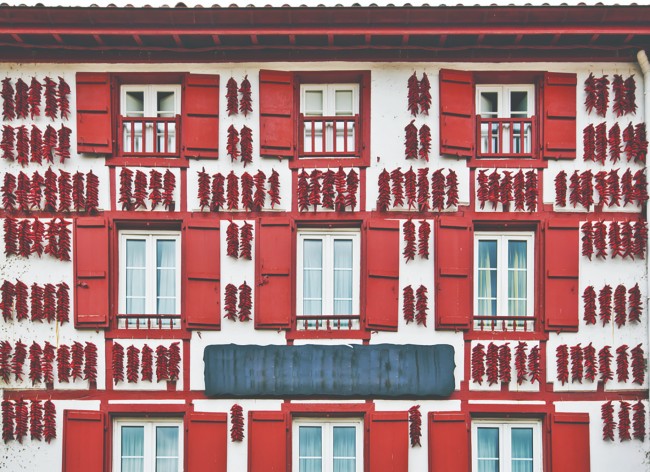 Peppers hanging up to dry in Espelette. Photo: Shutterstock

Rearing this old-fashioned pig chimed with modern tastes and trends, and success grew – now the hams hang in acclaimed restaurants from Toulouse to Paris, and in 2015 the jambon noir de Bigorre and porc noir de Bigorre achieved AOC status. Today there are 60 breeders and two artisan-charcutiers who prepare the meat for sale in its various guises, be it cooked and preserved in jars (pâtés, rillettes), dried (saucisse sèche) or fresh cuts – roasts and sausages.

In the French Basque country, the delicacies remain numerous and varied, including many cheeses and the sweet gâteau basque.

Party town Bayonne is home to wonderful cured ham and also has strong chocolate- making traditions, while the red pepper-adorned walls of Espelette reveal just how much the spicy chilli is appreciated – it is a key element of poulet basquaise and axoa, the local veal stew. You can then round off your regional culinary appreciation tour with a visit to a bar or a cidrerie, where you will raise a glass or three at a txotx (pronounced ‘tchotch’), the ritual of opening a Basque cider barrel. 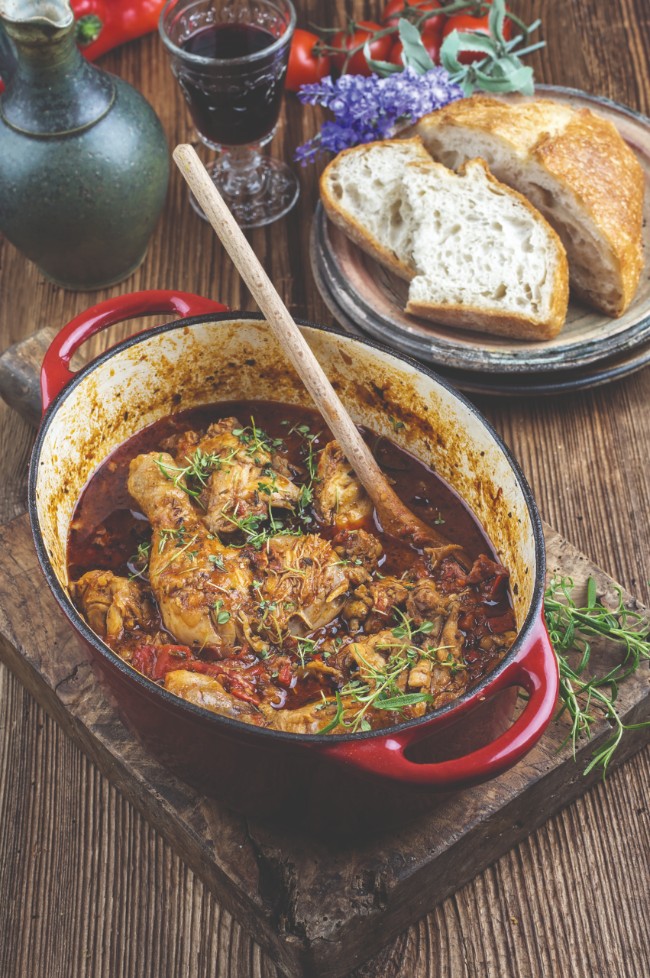