Franche-Comté: The Land of Plenty 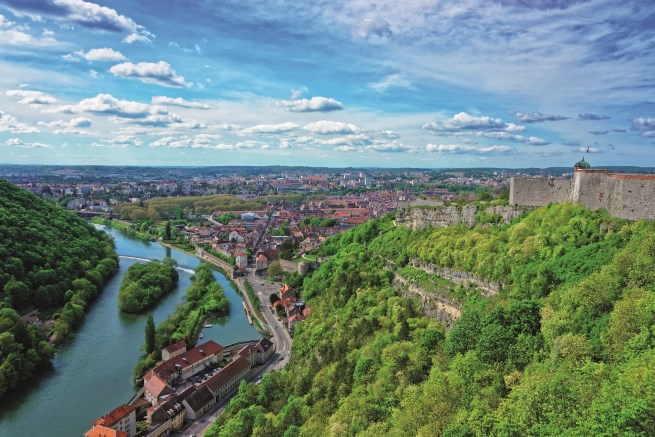 With two mountain ranges, abundant rivers and a clutch of heritage towns, Franche-Comté has oodles to offer the holidaymaker, and yet many Francophiles have yet to discover it. Gillian Thornton reveals a few incentives…

If your perfect French holiday isn’t complete without sea, sand and seafood, then Franche-Comté is unlikely to be your holiday destination of choice. But bear with me. Whatever else you love about France, you’ll find it in this glorious area in abundance: lush countryside splashed with areas of dense forest; the mountains of the Jura and southern Vosges for summer and winter sports; lakes and rivers for cruising holidays and recreation; and a rich history that’s guaranteed to stir the imagination through heritage towns and cultural sites.

Landlocked between Burgundy to the west and Switzerland to the east, Franche-Comté has seen rulers come and go here across the centuries – from the Roman Empire and the Holy Roman Empire, to the Habsburgs and the Kings of France. And the name? It’s a legacy of the time when the area was an independent ‘free county’ under the jurisdiction of the Holy Germanic Roman Empire. After the conquest by Louis XIV in 1678, the different départements were united under French rule but the name remained.

Yet Franche-Comté is still one of the country’s best-kept secrets; a predominantly rural area with a population significantly lower than the French national average. There’s no international airport here; nor is the countryside bisected by motorways, although it’s easy enough to turn off the north-south highway and head east. There are high-speed rail links, too, from Paris to Besançon, Belfort and other cultural hubs. Though even the most ardent Francophiles in my circle of friends reached for the Michelin atlas when I told them I was making a welcome return to the area.

But with the realignment of French regions last year, this eastern outpost has, at least, become geographically easier to pinpoint. Now its four départements – Doubs, Haute-Saône, Jura and Territoire de Belfort – are linked to their westerly neighbour to make Bourgogne Franche-Comté, and a joint marketing campaign is aiming to raise the region’s profile.

For many visitors, their first experience of Franche-Comté is Besançon in the Doubs département: former regional capital and the birthplace of Victor Hugo, whose military father was briefly garrisoned in the town with his wife. It’s also the hometown of Britain’s favourite French chef, Raymond Blanc. Nestled in a tight loop of the river Doubs, overlooked by wooded hills, Besançon is dominated by 17th-century military engineer Vauban’s imposing hilltop citadel.

Miraculously undamaged by two world wars, the town has retained its beautiful Renaissance buildings, constructed in a fetching combination of local stone in shades of pale blue and cream. The old town beneath the citadel is full of historic buildings, enchanting courtyards and hidden gardens.

Besançon has a long history of watchmaking and the Musée du Temps (Museum of Time) inside the Palais Granvelle is a must-visit. Climb to the top of the museum tower for a great city view, but the best panorama can be seen from Vauban’s turreted ramparts encircling the citadel buildings. No longer needed for soldiers and stores, they now house the moving Musée de la Résistance et de la Déportation (Deportation Museum), as well as an aquarium, insectarium and zoo. 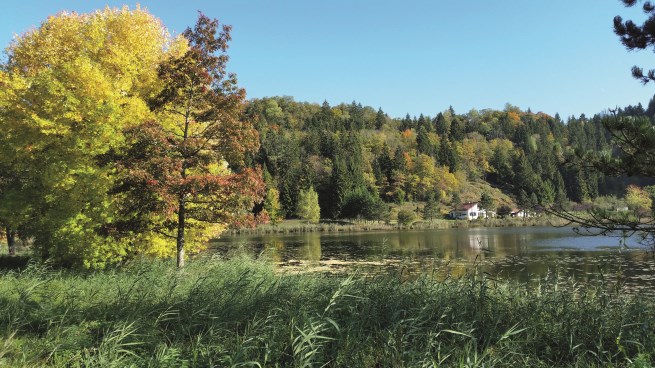 Vauban was kept busy too in Belfort, which stands at the heart of the area’s smallest département, Territoire de Belfort. The main attraction here is another vast citadel, heroically defended under siege in 1870-71 by Colonel Denfert-Rochereau, who later had a Parisian Metro station named after him! Don’t miss the huge stone lion sculpted by Bartholdi in remembrance on the outside wall above a terraced garden.

But there’s always a surprise around the corner in Franche-Comté and my first stay in Dole was a delight. Developed around a 12th-century château on a Roman road, Dole was the capital of the Comté, first under Burgundian and then Habsburg rule. But in 1674, the town was conquered by Louis XIV, annexed to France, and lost its status to Besançon.

Today it has more than 40 historic monuments, a designated Ville d’Art et d’Histoire bisected by the Doubs and by the Canal du Rhône au Rhin, where rental boats line the pretty quayside. Stroll around the ancient tannery district and ask at the tourist ofﬁce about guided visits to the top of the collegiate church. The panoramic view over jumbled rooftops, imposing buildings and waterways is glorious.

Also on the Doubs is Montbéliard, dominated by a turreted château and home for 300 years to the Dukes of Württemberg, following the marriage of the local count’s only daughter into German aristocracy. The eclectic château museum includes a fascinating gallery dedicated to local naturalist Georges Cuvier, born here in 1769 and the ﬁrst person to classify living creatures. On the edge of town at Sochaux, the excellent Musée de l’Aventure Peugeot is a must-visit for all ages charting the company’s rise from manufacturing household appliances to racing cars. 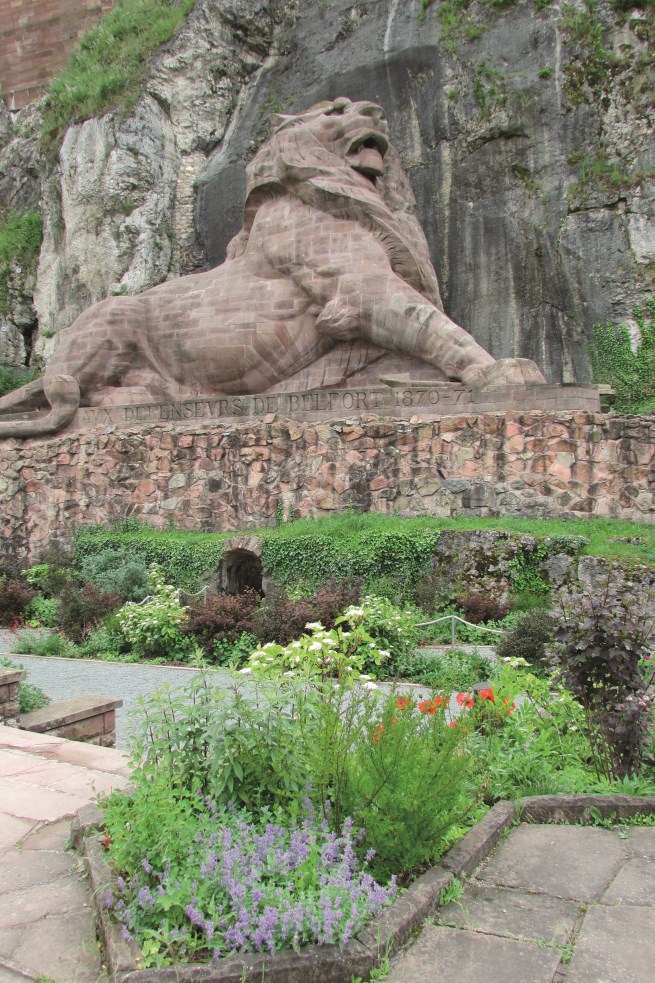 The ocean may be far away, but water is everywhere in Franche-Comté, both above and below ground. With 320km of navigable waters, it’s a popular area for ﬂuvial tourism – especially on the Saône, which ﬂows gently down a picturesque valley across the west of the region. The wilder Doubs river rises in the mountains near the Swiss border and ﬂows north-east towards Montbéliard. Here it makes a sweeping U-turn and heads south beside the Canal du Rhône au Rhin through Dole and Besançon before joining the Saône in Burgundy.

Rental boats are easy to operate and don’t require a permit if you fancy a holiday aﬂoat. Or just take a day trip – with or without an expert skipper. If you’re nifty with a rod and line, you’ll ﬁnd 30 of France’s top 100 angling sites in Franche-Comté including the rivers Loue and Lison. In the heart of the Jura, Lac de Saint-Point – the third largest natural lake in France – is another favourite with both ﬁshermen and sailing enthusiasts.

Popular natural attractions include waterfalls such as the spectacular Saut du Doubs and the Cascades du Hérisson, plus several subterranean caves, fashioned by rainwater dripping through the limestone of the Jura. My personal favourite is the Grotte d’Osselle in a cliff above the Doubs, where visitors walk through an unobtrusive door in the cliff face and within moments find themselves surrounded by amazing stalagmites and stalactites. Open to visitors since 1504, these are among the world’s oldest tourist caves. 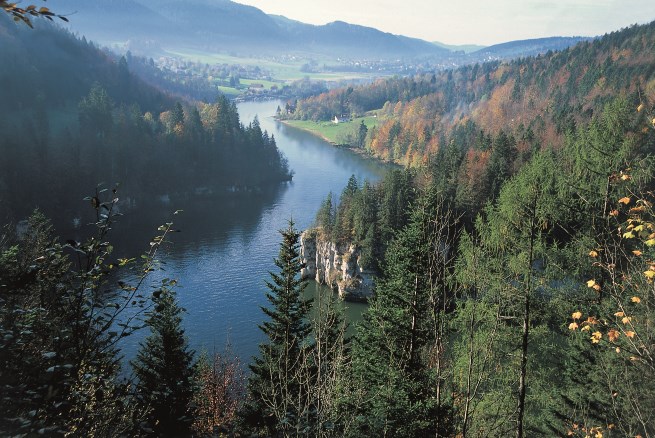 Franche-Comté also shares two of the largest regional parks in France, the Parc Naturel Régional des Ballons des Vosges to the north and the Parc Naturel Régional du Haut-Jura along its eastern border with Switzerland. Whatever kind of mountain activity you enjoy, summer or winter, you’ll find it here. The rounded summits of the Vosges are shared with Alsace and Lorraine and include the Plateau of 1,000 Lakes, carved out by glaciers and a favourite with hikers and naturalists.

The landscape of the Jura is even more diverse; its highest peaks topping 1,400 metres. In winter, you might spot French team skiers on the pistes of Monts Jura, while Métabief is a favourite with families. At the border resort of Les Rousses, you can have one ski in France, the other in Switzerland. 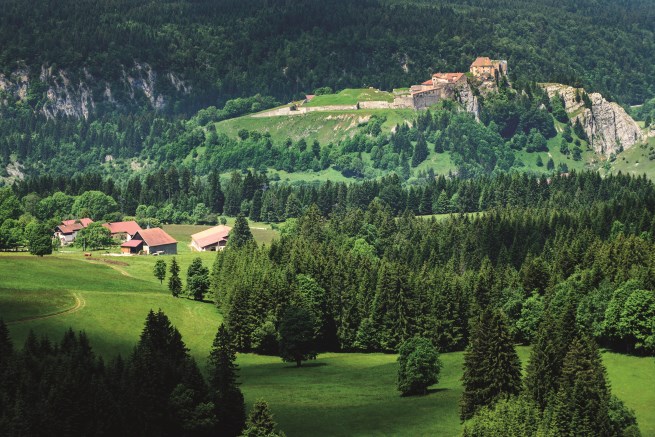 Salt museums don’t sound like terribly exciting tourist attractions, but Franche-Comté is home to two unique sites that, together, have been awarded World Heritage Site status by UNESCO. Salt water springs deep below the Jura have been exploited at Salins-les-Bains from the Middle Ages until 1962, the precious commodity guarded by two hilltop fortresses.

Visit the vaulted underground pumping station at the springs to find out how the strongest concentration of brine was treated here, while weaker solutions were carried 21km in wooden pipes to the Saline Royale d’Arc-et-Senans. Commissioned by Louis XV, this glorious example of 18th-century industrial architecture was conceived by visionary architect Claude-Nicolas Ledoux with workers’ homes arranged in a semi-circle around the production unit. Ledoux also designed Besançon’s theatre. He was the first person to locate musicians off-stage and put them in an orchestra pit. 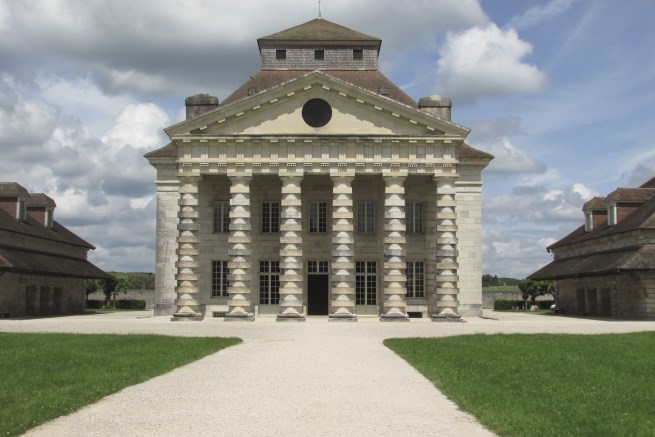 Other individuals have left their indelible stamp on the area, including 19th-century artist Gustave Courbet, whose former home beside the Loue is now a museum and gallery. Then there’s 20th-century architect Le Corbusier. His concrete constructions aren’t to everyone’s taste, but there’s no denying that his eye-catching Chapelle Notre Dame du Haut, in a stunning hilltop position at Ronchamp, is one of his more attractive buildings. It was built in 1955 and listed as a UNESCO Heritage Site in July 2016.

But the area’s favourite son is Louis Pasteur, arguably one of France’s most influential figures. Born in Dole in 1822, Pasteur moved to the small town of Arbois as a child, later becoming famous for his research into vaccines and pasteurisation and working closely with local wine producers. His comfortable lifestyle is reflected in the furnishings at the family home in Arbois, which he used as a summer residence throughout his life. Stop by today and it’s as if he’s just popped out for a baguette and could be back at any moment.

Also in Arbois is the Jura Vineyard and Wine Museum in the Château Pécauld – drop in for the low-down on Franche-Comté’s distinctive wines. And don’t leave town without visiting master chocolate maker Edouard Hirsinger, who creates delicious hand-made goodies with a variety of unusual seasonal ingredients. Just don’t bet any money you can guess what they are… you could be in for a surprise – and it wouldn’t be the first in this eye-opening region.