On the Trail of Albert Camus in the Luberon 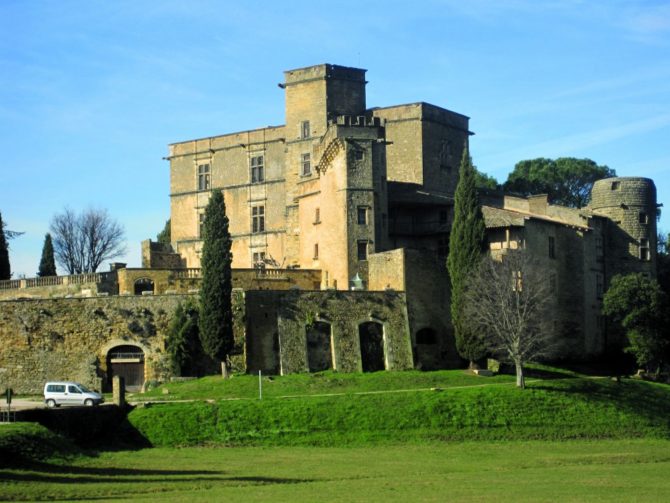 As much as I enjoyed Peter Mayle’s A Year in Provence, I must confess that I did not rush with the crowds to the Luberon in the 1990s. It was another writer that called me to the region last autumn, Algerian-born Albert Camus. Not quite to Mayle’s Ménerbes but to nearby Lourmarin, Camus’ last home and resting place where, ironically, Mayle now resides. It was late October when we went to Lourmarin – the tourists were gone and the village awash in soft autumnal glow, definitely deserving its “plus beaux villages” designation.

Standing on the edge of the village, our first destination, Provence’s oldest Renaissance Château, looked ravishingly luminous at that early hour of the morning. It was also Camus’ first introduction to Lourmarin, while studying at the Lycée of Algiers, through the eyes of his philosophy teacher, Jean Grenier. Les Terrasses de Lourmarin, in which Grenier had recorded his 1930 stay as writer- resident, deeply impressed his 17-year-old pupil.

The Château was in a state of disrepair in 1920, when Robert Laurent-Vuibert purchased it and had it restored, intending it to become Provence’s own “Villa Medici” – the prestigious French-owned artist residence in Rome. The Château, which is open to visitors, is still run as a writers’, artists’ and musicians’ residence by the Laurent-Vuibert Foundation, which also organises a variety of events open to the public, notably a spring chamber music festival.

Among the photos of past visitors, we were surprised to stumble upon one of the Queen Mother signing a book I couldn’t identify, and another of Winston Churchill painting the Château at his easel – he was instantly recognisable although seen from the back – both attesting to British presence in the Luberon antedating A Year In Provence. The photo of Cosima, the wife of Richard Wagner and daughter of Franz Liszt also intrigued me. It turned out that her Mother, Countess Marie, was the runaway wife of the Comte d’Agoult, the last descendent of the Lords of Lourmarin.

Camus’ first visit to the region, in 1937, was brief but in 1946 he came from Paris with three fellow writer friends and actually stayed with them at the Château, in Spartan rooms set far apart which felt spooky at night, his at the bottom of the tower. Armed with the carefree camaraderie and joie de vivre of youth, Camus loved Lourmarin – witness his letter of 1947 to his friend and poet, René Char, who hailed from nearby L’Ile-sur-la- Sorgue: “The region in France that I prefer is yours, more precisely the foot of the Luberon… Lourmarin, etc.”

Watching the exuberant light in Camus’ eyes, Char understood that in this region his friend had found “a land and people of twin suns”, meaning those of Provence and Algeria. In that same letter Camus asked Char (as he would Grenier and other friends), to help him find a house here, but despite the success of The Plague, that same year, it was only in September 1958, thanks to his Nobel Prize money, that Camus was finally able to buy his dream house on Rue de l’Église, now Rue Albert Camus. His daughter Catherine recalls how her Mother, Francine, she and her twin brother Jean were kept in Paris for the first six months, whilst Camus fixed and decorated the house as a surprise for them.

The large terrace above the rose-filled garden is still there, where he used to write standing up, facing the hills which reminded him of Algeria, happy to be away from the nasty poisoned atmosphere of Saint-Germain-des-Prés.

Catherine now lives in the family house and it cannot be turned into a museum, perhaps for the better – I loved seeing Camus live on through his daughter rather than an artificial recreation. I found it more meaningful to recapture his life in situ, on the football pitch at the foot of the Château, for a start. “Whatever I know about morality”, he said, “I’ve learnt on the football pitch and the theatre stage”.

Tuberculosis got in the way of Camus becoming a professional football player but he was passionate about it – thrilled by the exaltation and solidarity experienced by the team as they prepared for the great and inevitably ephemeral performance, the final and inevitable victory or defeat. He never missed a game by Lourmarin’s Youth Club, buying the players their T-shirts and having coffee with them on the terrace of l’Ollier, the village hôtel-restaurant bought by Monsieur Ollier in 1892 (now Café de la Fontaine and Brasserie L’Insolite), where Camus and his writer friends took their meals, amidst jokes and banter, when they stayed at the Château in 1946. By 1958 Camus was a famous Nobel laureate (the second youngest after Rudyard Kipling), but still hanging out there incognito and addressed by the owner as ‘Monsieur Terrasse’.

Camus’ memorial trail ends in the village cemetery, where he and his wife Francine rest side by side, in two separate graves. Camus was just 46 on January 4, 1960, when he died near Sens in a car crash on his way to Paris– snatched midlife, as if to stage an ironical metaphor of the absurdity of life which was central to his philosophical preoccupations. In the car, which had been driven way too fast by his publisher Michel Gallimard (who died a few days later), was the unfinished manuscript of his autobiographical The First Man, which Catherine published in 1994. There was also an unused Paris-Lourmarin train ticket. Camus was brought to rest in Lourmarin, his coffin carried by the players of the village football club, accompanied by family and friends, including Jean Grenier and René Char.

Gazing at the crude tombstone which marks his grave, bearing no more than his name and years of birth and death, I was relieved that the family had opposed President Sarkozy’s initiative to have him moved to the Paris Panthéon.

HOW TO VISIT LOURMARIN

WHERE TO EAT AND/OR SLEEP