Saint-Paul de Vence: The Jewel of the French Riviera 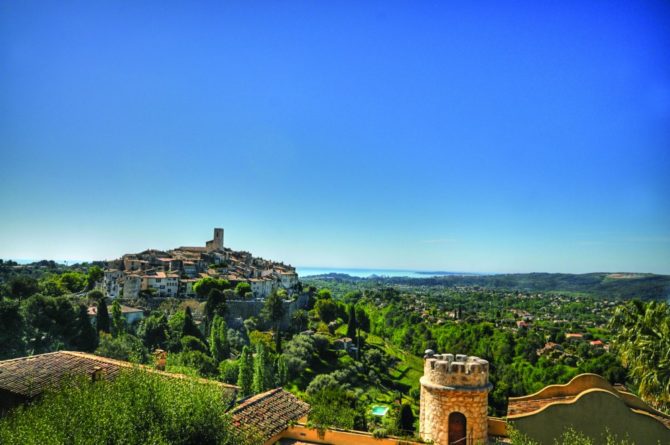 The glitzy and glamorous seaside resorts of Nice, Cannes and St Tropez might receive all the attention on the French Riviera, however, the region is home to another jewel, one nestled high up in the hinterlands. With its labyrinth of cobblestoned alleys, imposing ramparts dating back to Medieval times and views down to the Mediterranean Sea, the charming hilltop village of Saint-Paul de Vence makes for a popular getaway, thanks to its picture-postcard good looks. In its heyday, countless artists – struggling and established – fell under Saint-Paul de Vence’s spell. The golden era maybe long gone but its status as a source of artistic inspiration lives on, and an air of old-school mystique still hangs over the village.

Visitors can follow in the footsteps of the artists who once lived in or frequented the village – including Marc Chagall, Pablo Picasso, Henri Matisse and Jean-Michel Folon – and admire the vistas they immortalised. Franco-Russian artist Marc Chagall, who among other things, is known for having painted the ceiling of the auditorium at the Opéra de Paris, lived out the last three decades of his life in Saint-Paul de Vence, making it his home from 1966 until his death, aged 97, in 1985. Together with his wife Valentina, known as Vava, Chagall settled in a specially-built maison-atelier known as La Colline on the outer edges of the village, where he completed some of his most famous works. Chagall’s perhaps best remembered for his bold use of colour and ability to depict vivid emotions, which is evident in such pieces as La Mariée, Le Couple Bleu (both 1950), Les Amoureux de Vence (1957) and La Rencontre (1970-1975). Many of the watercolours that he painted during his time as a resident of Saint-Paul de Vence are widely considered to be heartfelt odes to love.

Belgian painter and sculptor Jean-Michel Folon discovered Saint-Paul de Vence in the mid-1970s, and his regular visits to the village spanned three decades. One of his most impressive oeuvres is housed in the 17th-century White Penitents Chapel, otherwise known as the Folon Chapel. It contains treasures which range from stained glass windows and sculptures to paintings and – shimmering at the far end of the sanctuary – Folon’s pièce de résistance, a rainbow-hued mosaic which took him a decade to complete.

With 10,000 pearly tiles per square metre, and approximately a million used in total, Folon’s masterpiece took a team of around eight people a painstaking 9,000 hours (two years) to complete. The redecoration of the chapel, at the invitation of the village’s mayor, was to be one of Folon’s final projects but, sadly, he died in 2005 – long before the building’s official reopening in 2008 – but it is certainly a magnificent legacy to have left behind. Artists were drawn to Saint-Paul de Vence in their droves so, somewhat unsurprisingly, the village also enjoys a reputation as a happy hunting ground for art-lovers. Despite its small size, a myriad of fine art galleries and ateliers are scattered throughout its winding streets. Within the ramparts, the most established galleries have been exhibiting modern art collections for several decades. Among them are the prestigious Frédéric Gollong Gallery, one of the first art spaces to open in Saint-Paul de Vence; Le Capricorne, a fine choice for the works of Picasso, Chagall, Matisse and Braque; and the Guy Pieters Gallery, which has recently reopened after a full renovation.

Art Seiller, meanwhile, is a newcomer which displays engravings, lithographs and rare posters alongside its permanent collection of paintings and sculptures by such acclaimed modern and contemporary artists as David Kracov, Odile de Schwilgue and Yoël Benharrouche.

Saint-Paul de Vence is also home to the excellent Musée de Saint-Paul, which is located a stone’s throw from the village’s entrance. Situated in a traditional 16th century stone house, the museum hosts ever-changing exhibitions which showcase the best of contemporary art, featuring those who have left their mark – or rather brushstrokes – upon the village, such as Chagall and André Verdet.

However, Saint-Paul de Vence is perhaps most famous for being home to the Fondation Maeght, a temple to modern and contemporary art which reached its 50th anniversary in 2014. Nestled in sprawling gardens a short stroll from the village, the foundation began as a personal project for a tragedy-stricken Aimé and Marguerite Maeght, following the death of their young son.

Designed by Catalan architect Josep Lluís Sert, the Fondation Maeght boasts one of the largest and most important collections of 20th century art in Europe. Many of the Maeghts’ artist friends collaborated with them, creating eye-catching works that were seamlessly woven into the museum’s landscape – from Joan Miró’s sculpture and ceramics-filled labyrinth and Chagall’s mosaic mural, to Alberto Giacometti’s peaceful courtyard and Georges Braque’s pool and stained glass windows.

Performance art was also close to the Maeghts’ hearts. An exhibition entitled This is Not a Museum, exploring the links between the visual arts and dance, literature, poetry, theatre and music, ran until March 15 and rounded up the Foundation’s half-century celebrations.

While the stunning light and colour of Saint-Paul de Vence’s landscapes continue to attract artists, the village has also long had ties to celebrities – Ernest Hemingway and Zelda and F Scott Fitzgerald are just a few of the names who appear on its roll call of stars. In particular, cinema greats have visited over the years, with Kirk Douglas, Orson Welles, Michael Caine and Gene Wilder among the famous faces. Jet-setting celebrities had already been flocking to the French Riviera since the early 1940s, but in Saint-Paul de Vence they saw a place to get away from the madness and embraced this serene setting, which seemed miles away from the rest of the world. Saint-Paul de Vence’s star-pulling power reached its height during the 1950s and 1960s, when actors Yves Montand and Simone Signoret, as well as poet and screenwriter Jacques Prévert became part of the local community. The latter, who discovered the village in the early 1940s, at one point moved into ‘La Miette’, a charming abode tucked away in the heart of the village on the Rue de l’Allée. The house still stands today, framed by thick lashings of bougainvillea and climbing ivy.

Like many celebrities, Prévert was a regular at the fashionable La Colombe d’Or, a now legendary inn established in 1932. Run by local character Paul Roux and his wife Baptistine (aka ‘Titine’), it was the place to be and ‘anyone who was anyone’ knew the importance of showing their face there. Some of the biggest names in art and literature became regulars at the auberge, and often left behind beautiful pieces of work, many of which remain today, such as the colourful sign that hangs above the entrance, painted by Jean-Michel Folon.

La Colombe d’Or is also legendary for being the meeting place of two of France’s biggest stars of the mid-20th century. Yves Montand and Simone Signoret were the toast of French cinema, and she was also the first Gaul to receive an Academy Award, for her role in Room at the Top (1959). The couple married at the local town hall in 1951, then co-starred in several films, their romance blossoming until Signoret’s death from cancer in 1985.

Although the Colombe d’Or is noted for its historical significance, Le Mas de Pierre, a nearby boutique hotel, provides the ultimate five-star experience. The mas, or Provençal-style farmhouse, is a lesson in discreet luxury that’s set in a fragrant Mediterranean garden with fig trees, orange and lemon groves, and centuries-old olive trees.

Last summer, exclusive accommodation in the Bastide des Fleurs was unveiled and this brand new addition to Le Mas de Pierre features six light and spacious suites, each with terraces or balconies overlooking a private, heated swimming pool. The suites possess an air of timeless elegance, and a dedicated butler is the icing on the cake. Le Mas de Pierre overlooks lush green mountains and is only a few minutes from the entrance to the village and the adjacent Place Charles de Gaulle, which is otherwise known as the Place du Jeu de Boules and serves as the rendezvous for lovers of pétanque.

Under the shade of centuries-old plane trees, locals and tourists alike gather at the always-busy Café de la Place for a spot of people watching. But there’s much more to Saint-Paul de Vence than old celebrity haunts and artists’ workshops…

From Rue Grande, the main street that traverses the village from north to south, the narrow streets are awash with chic boutiques, ancient stone façades, and picturesque squares which reveal elegant fountains and beautifully preserved Provençal houses bursting with old world charm. When the tourist crush gets a little too much, escape to the ramparts along the village’s edge for breathtaking views over the surrounding vineyards.

Are you interested in purchasing a beautiful property in the Saint-Paul-De-Vence? Click here to see what FrenchEntrée have on the market right now.

Saint-Paul de Vence Essentials: How to get there, what to see and where to stay…

High-speed TGV from Paris to Nice.

Previous Article 5 of the Best Concept Cafés in Paris
Next Article Evenings Out in Paris: French Fried Comedy Night