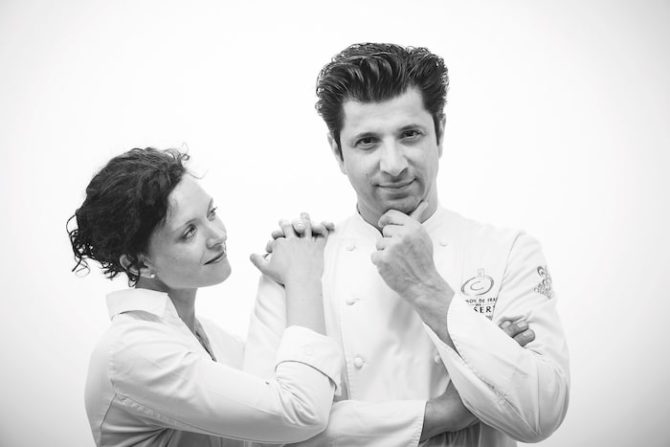 Who doesn’t love Provence? And who doesn’t love to eat? Put the two together and the possibilities for ravishing the palate and placating the soul are endless. That’s what a band of chefs-hôteliers – native and newly arrived – is demonstrating in a place that’s evolved into France’s most exciting gastronomic destination. Besides its concentration of Michelin stars, what sets Provence apart is its astonishing variety, an inexhaustible source of inspiration for curious chefs and the main reason they flock to the region. According to the French Chamber of Agriculture, Provence-Alpes-Côte d’Azur (Provence for short) produces more fresh fruit and vegetables than anywhere else in France, and 23 per cent of the cultivated land here is dedicated to organic, as opposed to the national average of 6.6 per cent.

“My priority is to craft a Provençale cuisine, to work with everything we have around us,” says Fanny Rey, who co-owns L’Auberge de Saint-Rémy-de-Provence, a restaurant and 11-room inn, with her husband, pastry chef Jonathan Wahid. “Few chefs in France are lucky enough to have access to such a diversity of produce. Each time I design a menu I’m frustrated by the fact that I can’t include more exceptional products.” 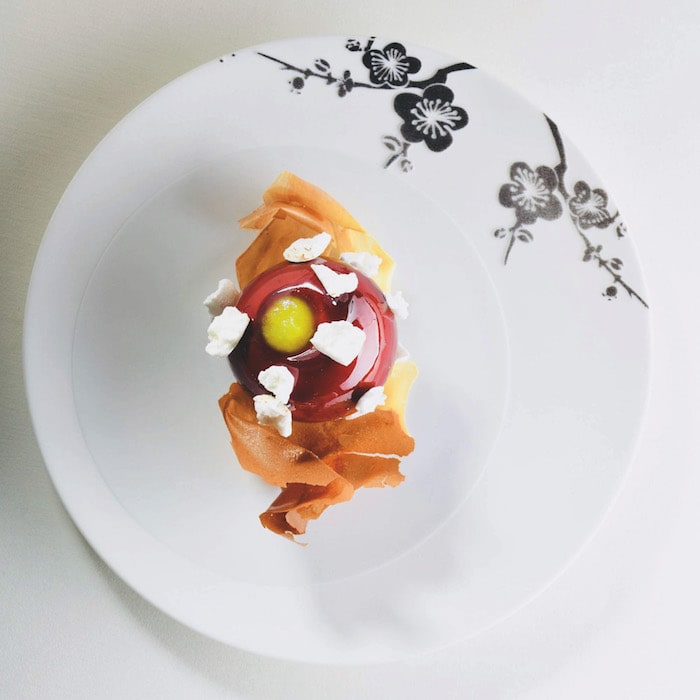 A rustic yet sophisticated dish served up at L’Auberge. Image @ Auberge De Saint-Rémy-De-Provence

Already a standout, the restaurant quickly became a culinary Mecca when Rey was named Female Chef of the Year by the Michelin Guide, eight months after being awarded her first star in 2017, at the age of 35 – making her the only woman among the guide’s new winners that year.

Over Rey’s 15 years in Provence, the Burgundy native has honed her craft in such notable kitchens as the winery and farmhouse inn La Bastide de Marie and L’Oustau de Baumanière, the region’s most venerable gastronomic table. She has also immersed herself in the vernacular of Provence and cultivated relationships with the most important link in the food chain: the grower. “I think the personal contact with producers and the terroir is essential for a chef,” she insists.

“A dish starts from a human encounter. My strawberry grower will come see me to say, ‘these are my first strawberries’, and we will dream up something around them. My main concern is to feature local produce. I’m not interested in working with produce from another place. And I still have a lot to discover here.”

Rey is far from alone. Respect for the land, the ability to cultivate relationships with farmers and to celebrate the products abundant in every season (Rey counts 12) is why chefs come here – and stay. 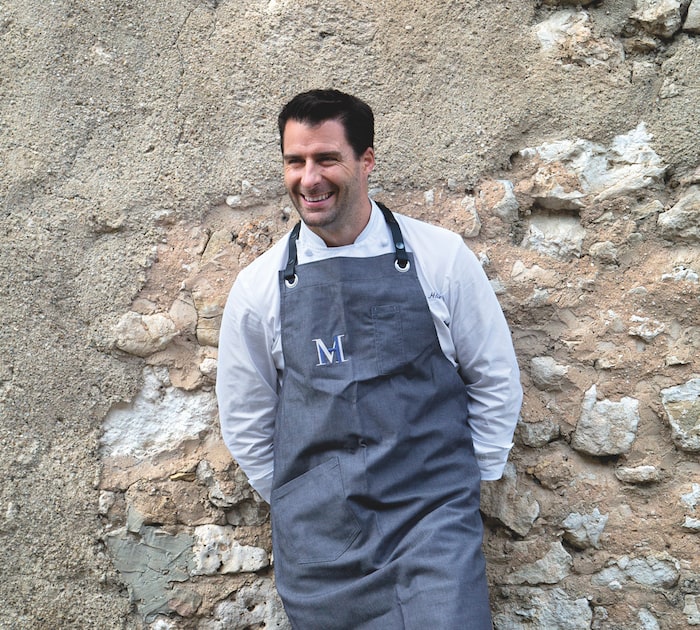 “Here the relationship between me and the producer is closer because I go to see them, we talk about a lot of things. In Paris it’s completely different: we just call and say, okay, I want this, I want that and sometimes you don’t know where it’s coming from,” explains Christopher Hache on a rainy late-October morning, enjoying buttery croissants from his boulangerie in front of a cheerful fire. A rising Paris talent, Hache triumphed at the prestigious Hôtel de Crillon’s Les Ambassadeurs, becoming in 2011 one of the youngest chefs to earn a Michelin star at the age of 28. Renovations shuttered the palace between 2013 and 2017, after which Hache returned to preside over the new gastronomic restaurant L’Écrin, a tiny 22-seat jewel, where a second star seemed imminent.

In January 2019, he shocked the Paris culinary establishment by throwing in his toque, heading to Provence and launching his own eatery, Maison Hache. 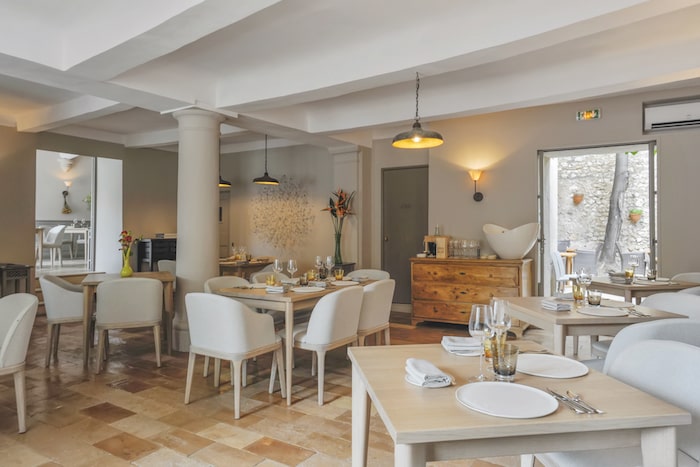 Arriving in Eygalières, a tiny, impossibly picturesque medieval village at the edge of the starkly beautiful Alpilles mountain range about eight miles from Saint-Rémy-de-Provence, I quickly get the picture.

Both Maison Hache and Boulangerie Hache next door are exemplars of sophisticated simplicity and low-key refinement.

Hache’s sensibility extends to a menu that abandons Parisian pomp for the simpler riches of his adopted terrain and the wild Camargue nearby: a heavenly “cappuccino” of fennel and thyme; lightly grilled Camargue oysters and artichokes à barigoule (an old Provençal dish); escargots petits gris, sea bass with nutty red Camargue rice and a rich, sweet mousse of butternut squash.

“My cuisine has not changed completely because it still focuses on the produce, the seasonality… not [using] many products, just two or three, no more. For me, it was more difficult looking for something local to create an experience of local food with the local produce. I think when you find it, it’s something that people enjoy because they get the real experience of what Provence is.”

Hache plans to keep the restaurant intimate but expand the lodgings. Though French and international foodies have caught on, Maison Hache remains an undiscovered gem for now. But not for long. 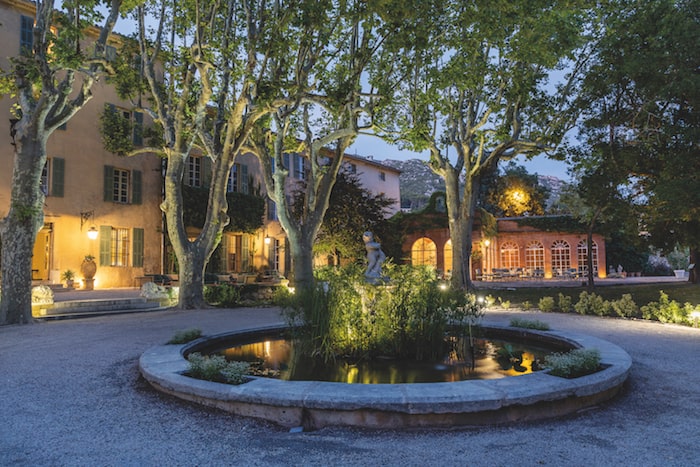 On a golden October afternoon, late and flustered after wrestling with a defiant GPS, the shady approach to La Magdeleine is reassuringly serene. Lined with 100-year-old plane trees and fronted by a gurgling 18th-century fountain, this gracious manor house is like the quintessential dream of Provence. After six years in the shadow of Cézanne’s Mont Sainte-Victoire at Le Saint Estève, just outside Aix-en-Provence, where he earned his Michelin star, Mathias Dandine returned to his native Var last August as the chef and proprietor of Le Relais de la Magdeleine, a picturesque four-star hotel and restaurant about 10 miles north of the seaside town of Cassis.

Mathias Dandine at work in the kitchen in his native Var. Image @ Julie Limont

It’s a rare pleasure to revisit the cuisine of this spectacularly gifted chef in his country dining room, polished yet homely under beamed ceilings and long windows, with a working fireplace and intricate parquet floors. “I have always had freedom in my vegetable-based Provençal cooking,” he says. “I am Provençal, and I have always made Provençale cuisine – a cuisine of terroir with a contemporary spin. And, of course the environment, and the expression of it, inspires me daily.”

In introducing French cuisine to the US, Julia Child acknowledged cream and butter as the heart and soul of French cooking. But even she was knocked sideways in Provence by the simplicity of a steamed fish, the rustic goodness of ratatouille, the possibilities of olive oil over animal fat (cows were not raised in Provence, so butter was never in the traditional family larder until grocery stores proliferated in the 1980s).

Fanny Rey has all but abandoned the use of butter and for years has been experimenting with the salinity of seaweed as an alternative to salt, the shortcut of seasonings. “Salt and butter are basics, flavour enhancers,” she says. “So in suppressing these there is a lot of work to be done. And I think the customer thanks us for the work we’ve done. I also have a few rooms, which gives me the opportunity to talk with my guests in the morning – guests who wake up feeling light, not full, who have slept well.” 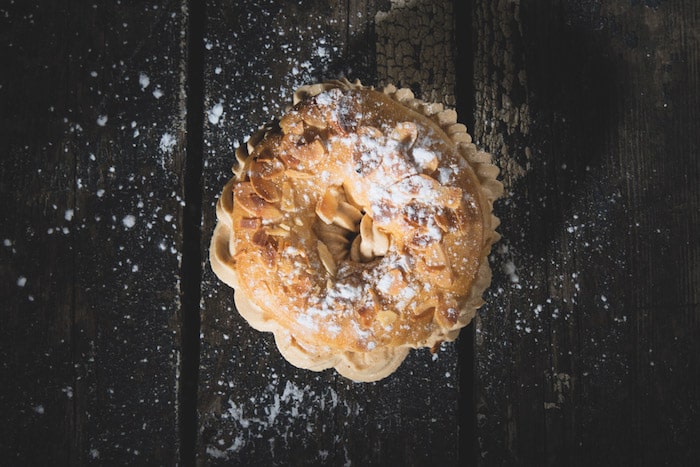 For Nadia Sammut, the chef at L’Auberge la Fenière, a gastronomic restaurant, bistro and inn near the village of Lourmarin, foregoing butter, along with dairy and gluten, was a matter of necessity. A third-generation chef – her mother, Reine Sammut, was one of the first women in France to earn a Michelin star – Sammut was born with coeliac disease and grew up unable to enjoy her mother’s cooking or the gastronomic tables the family frequented.

In her early 30s, after two years in bed and a lifetime of misery around food, she founded Cuisine Libre, her manifesto for a different way of approaching fine dining. Although free from gluten and dairy, her cuisine has nothing to do with rejection (she has no problem serving meat as long as the animal “has been respected”), but instead embraces a way of cooking and eating in which everyone can partake.

“I think that eating consciously is not just about diet but about life,” she goes on. “Anyone can be unbalanced because of a way of life, because of many things, but I think the point is being balanced.”

In 2015, on the eve of her parents’ retirement, she decided to take the reins and forge her own path: experimenting, testing her ideas, and moving forward with a vision honed as much by her love of cooking and eating as a deep empathy for others with constraints around food. 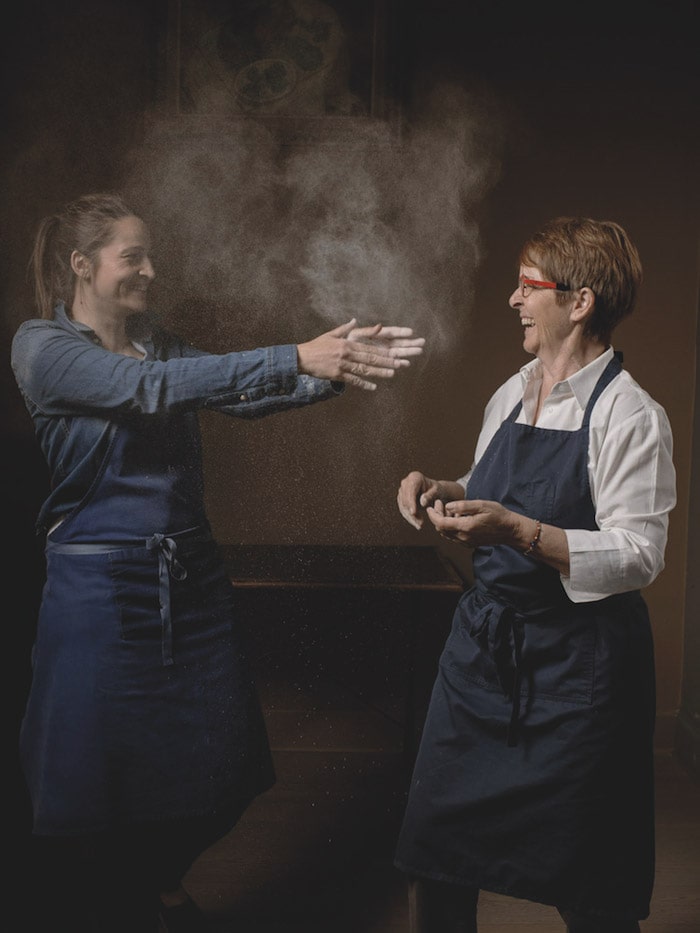 Any lingering doubts in those around her were put to rest in 2016 when she not only maintained the restaurant’s Michelin star but was invited to cook the awards dinner for the star recipients.

Working 99 per cent with the products of Provence and being a native of the area, she too has forged abiding relationships with growers. The afternoon we meet she has just received a variety of colourful radishes she’s never seen before from a local farmer. He was curious about what she would do with them, so she invited him into the kitchen to experiment.

Sammut sees herself not only as a chef but “someone who transmits things”. Some of Paris’s most famous chefs have consulted with her and she regularly teaches at the University of Gastronomic Sciences in Pollenzo, Italy. She also recently launched a business selling her whole, non-gluten flours made from Camargue rice, buckwheat and chickpeas grown and milled in Provence.

Sammut sees herself not only as a chef but “someone who transmits things”. Some of Paris’s most famous chefs have consulted with her and she regularly teaches at the University of Gastronomic Sciences in Pollenzo, Italy. She also recently launched a business selling her whole, non-gluten flours made from Camargue rice, buckwheat and chickpeas grown and milled in Provence.

Previous Article Win a Provençal Pampering Set worth €102
Next Article On Écoute: Stuck in the Sound