The French Riviera in Winter 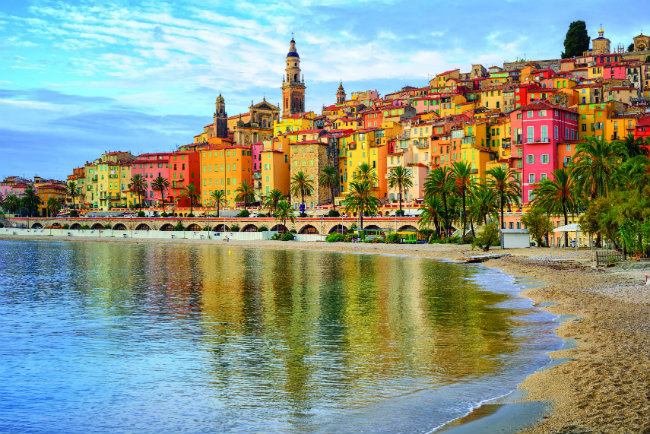 The initial attraction was obvious – especially to those burdened by the aristocratic afflictions of yesteryear: tuberculosis, gout and family disgrace. From December through March, most of the cloud is captured in the Alpes-Maritimes’ mountains that backdrop the Côte d’Azur to the north, allowing the low sun to orbit underneath to the south. For every rainy day in winter, there are five dry ones. Sunshine cured the lungs of the consumptive; citrus healed the overweight; wine and laughter fuelled the dissolute who had already imbibed too much back home. Postcards, court circulars and scandalous snippets from The Times kept punters coming back for more.

By and large, today’s visitors ignore the winter. The Côte d’Azur welcomes a mammoth 650,000 visitors per day in mid-August, yet just 50,000 per day in gloriously sunny December and January, rendering the museums and palaces empty, inviting and tourist-free. Hotels halve in price, restaurants serve oyster and truffle lunchtime specials, and your neighbourhood boulanger will welcome you like an honorary local. In truth, the sun shines on anyone who’s willing to railroad, fly or drive the short journey south. 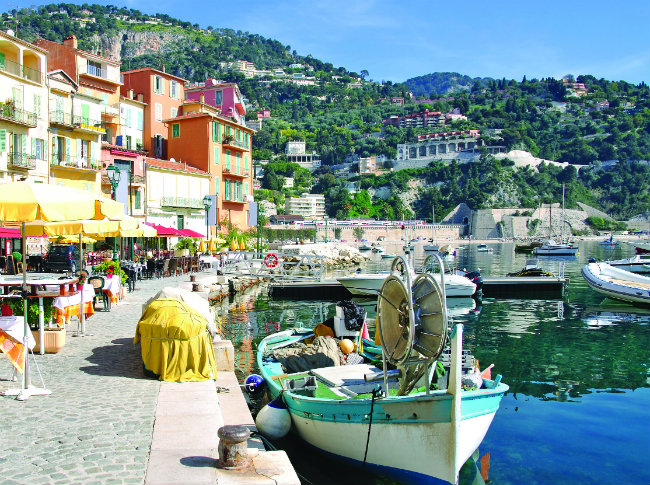 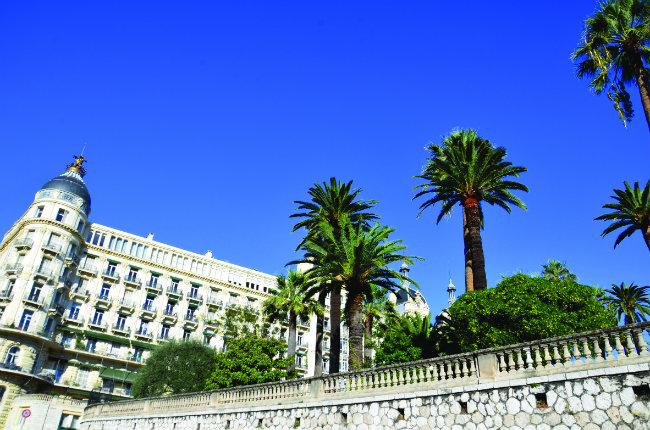 Originally built to attract the wealth of Europe, the Hôtel Regina is now a set of
apartments. Photo: Fotolia

In 1863 a novel invention changed global tourism for good. The arrival of the railway meant that the two-week journey from London to Nice was slashed to under 30 hours. Lords and ladies could board at Charing Cross for afternoon tea, then be in the South of France for supper the following evening. The Côte d’Azur became the world’s first ‘long haul’ destination, although guests aboard sipped claret, played Bezique and dined on roast quail. For these well-heeled travellers, ‘economy’ was unknown. The passenger list on what would become known as Le Train Bleu read like a Who’s Who of fin de siècle celebrity, from Edward VIII to Winston Churchill.

Nice’s Musée Massena history museum exhibits train tickets from Le Train Bleu, as well as menus from masked balls (with plenty of crème anglaise for dessert) plus portraits of white-suited gentlemen thronging the Promenade des Anglais, where Niçois of all ages now meet on New Year’s Day for a chilly swim in the sea. A century ago, debutantes could come out during the Riviera’s winter ‘season’. The ropiest no-hopers could travel on to Cairo via Genoa in anticipation of marrying an Indian Army officer or a colonial clerk. An annotated map on the museum’s second storey captures the age: this 1875 cadéstre (a French street map that Notaires give to property buyers) highlights the Cours Saleya boulevard along with the name and nationality of its residents. Like an Airbnb of the age, English milords, American magnates and a Russian Count have reserved the most desirable addresses for a high-season fling. 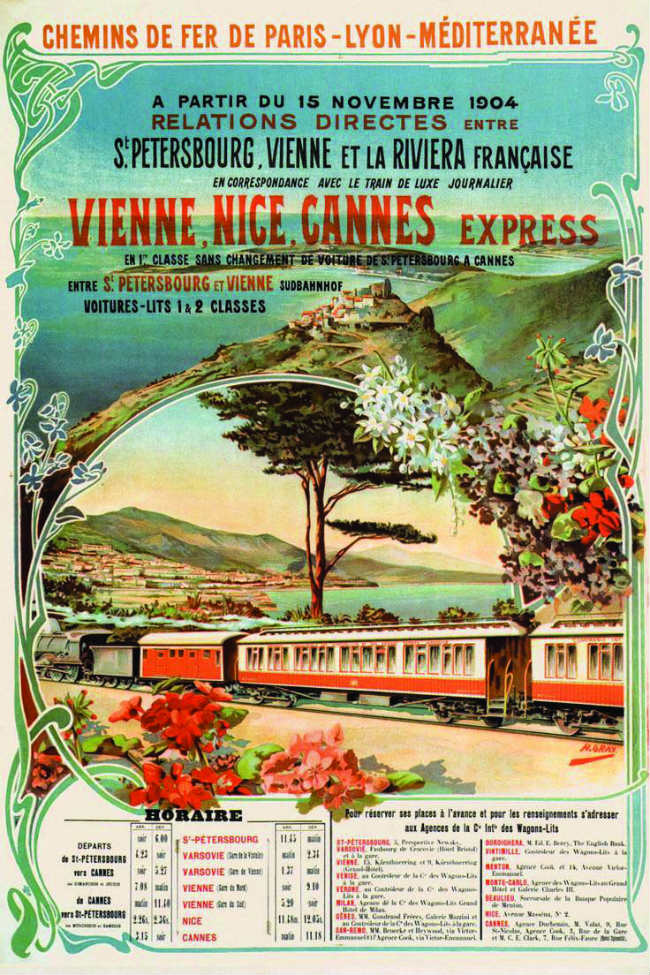 The period’s most celebrated arrival was Queen Victoria in 1882. The Empress of India travelled to the Riviera for another five sun-kissed winters until 1899. She travelled by private train, which would stop for an hour each morning for gentlemen to shave and ladies to dress themselves. Up to 100 staff would join her on the slow journey south to Gare de Nice-Ville (Queen Vic disliked travelling faster than 30mph) including kilted Scottish gillie John Brown and her turbaned private secretary, Abdul Karim.

A building boom was precipitated by Queen Victoria’s stays of months at a time. The Hôtel Regina in Nice’s ritzy suburb of Cimiez was built with the specific intention of wowing the royal family. It boasted electronic elevators and oil-fired central heating. Other madcap homes – Moorish castles, Roman villas, Normandy châteaux – were constructed nearby. Half a century later, painter Henri Matisse moved into the Regina Palace hotel. His Musée Matisse, plus the museum dedicated to contemporary Marc Chagall, sit just around the corner in a suburb that still embodies Nice’s old money sophistication. 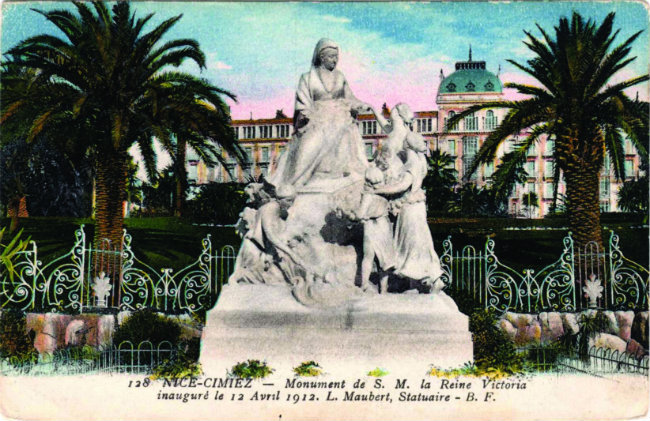 a French postcard of the monument to
Queen Victoria in Cimiez

Nobility of Victoria’s calibre attracted the great houses of Europe – most of whom were related to the Empress anyway. Her Majesty bumped into her first cousin, Belgian King Leopold II, on the beach in Villefranche-sur-Mer. From distant Moscow a direct train would rattle its way from Belorusskaya Station via Smolensk and Minsk to Menton and Monaco. In winter 1912, Tsar Nicholas II sailed on the Russian royal yacht into the Port of Nice. His stately procession along the seafront Promenade was captured on flickering celluloid by the Lumière brothers, the Spielbergs of their day. The Russian Emperor was in town to open Nice’s Orthodox Cathedral. The onion-domed edifice remains the largest of its kind in Western Europe, its interior a moody, broody kaleidoscope of candlelit icons and shimmering gold. 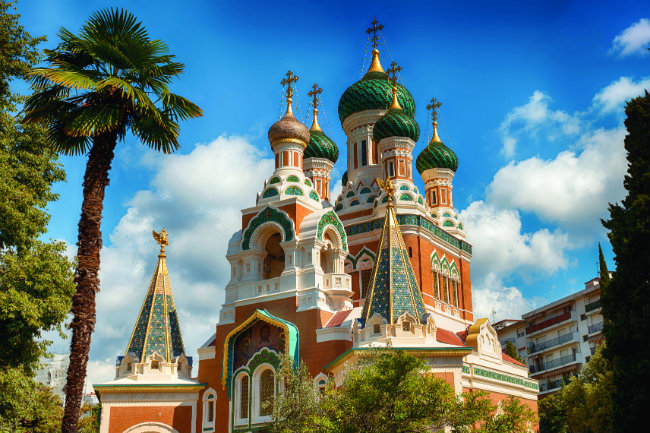 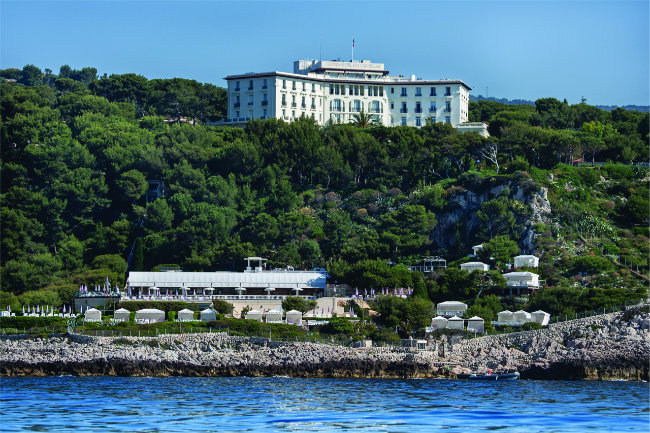 Back in the 1850s, Monaco was in dire straits. A series of poor lemon harvests in the territory of Menton – now the sunniest town in France – meant the ruling Grimaldi family was staring bankruptcy in the face. Charles III, Prince of Monaco, was tasked with a Dubai-style plan: build a whopping great casino and a series of grand hotels in the hope that high rollers would check in for winter. The ploy worked. Paris Opera House architect Charles Garnier designed the gaming halls. Queen Victoria contrived – and failed – to keep her pleasure-loving son Prince Bertie (later King Edward VII) from the roulette table. Vladimir Lenin also stopped by and fumed that the general public were gambling money on a mere “game of chance” – which, if you’re not a Bolshevik, is terribly good fun. In a final piece of PR puff, the Spélugues area (which translates as ‘caves’) was rechristened Monte-Carlo in honour of the ruling monarch.

To ensure that Monégasques don’t fritter away their inheritance – Monaco’s rulers are far from stupid – proof of overseas identity is needed to enter the Casino de Monte-Carlo. Ionic columns support the roof of the Salon Europe. Here roulette and blackjack are played under gilded ceilings for maximum bets of €10,000 – to wager more, have a word with the croupier then stroll on to the Salons Privés. Alas, to access Les Salons Super Privés it helps if you’re staying at the Hôtel de Paris across the street, as a top-secret tunnel connects these two establishments. If you can’t afford the hotel’s €8,000 Garnier Suite, then a French 75 cocktail in its Bar Américain or lunch at its recently reopened Restaurant Louis XV (the only Michelin three-star for hundreds of miles around) might be more appropriate.

To add an artsy sense of class, a theatre was tacked onto the Casino de Monte-Carlo in the winter of 1879. Actress Sarah Bernhardt kicked off proceedings in January of that year. The most famous troupe of the time, Sergei Diaghilev’s Ballets Russes, were stranded in the South of France by the Russian Revolution. Such was the region’s cultural muscle that performances boasted costumes by Coco Chanel, sets by Pablo Picasso and posters by Jean Cocteau. Opéra de Monte-Carlo’s spellbinding 2017 season features Il Trovatore, which was first performed here in February 1884. Let’s hope it’s not disturbed by the Rallye de Monte-Carlo, which tears from the ski slopes high in the Alpes-Maritimes down to Casino Square. 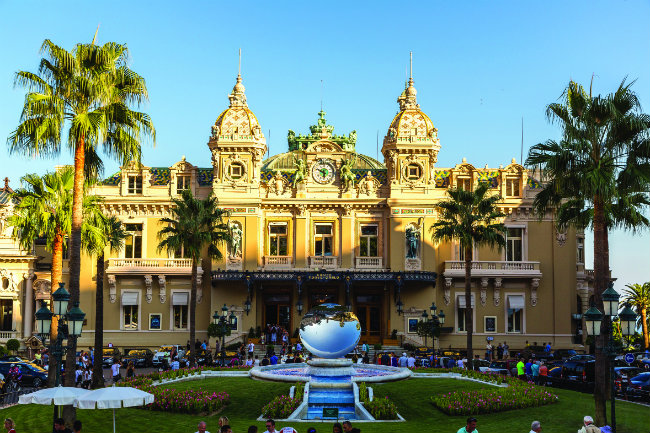 Drive west along the Corniche coastal road in summer and you’ll be stuck behind something as prosaic as a Carrefour delivery truck. Drive west in winter and you could double as Cary Grant in To Catch a Thief. The coastal road ribbons past orchards and ornamental gardens, past islands and beachy creeks, all beset with winter sprinkles of mimosa, bougainvillea and early citrus blossom. Veer off the main highway to spot Bonelli’s eagles near Cap d’Ail, and multicoloured Fischer’s Lovebirds in Cap-Ferrat, the latter the descendants of escapees from a rich man’s menagerie.

A century ago, it was wealthy hivernants who flocked to Cap-Ferrat. Not content with being the largest landowner in the world, Leopold II, King of the Belgians, also owned most of the peninsula, then (as now) the priciest spit of land on the planet. He sold the Cap piecemeal to aristocratic acquaintances. Wealthy divorcee Béatrice de Rothschild snapped up the prime piece of real estate on the peninsula’s highest point and set about building a bright pink château of fairy-tale proportions. 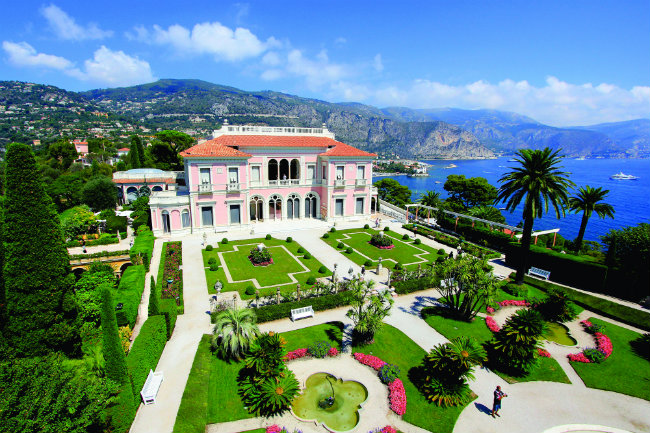 In 1912 her Villa Ephrussi de Rothschild was finally complete. Béatrice furnished the winter home (other seasonal residences included Paris and Deauville) by having Sèvres porcelain and 5,000 other works of art railroaded to Beaulieu train station. (It helped that the Rothschild family owned a ruling stake in the Chemins de Fer de Paris à Lyon et à la Méditerranée.) On the platform, Béatrice would rifle through the antiques and have the best bits wagoned back to her mansion. Thirty gardeners dressed in naval uniforms with red pompom hats tended to the nine ornamental gardens.

Such shenanigans served to attract more wintering wealthy. In 1908 the Grand-Hôtel du Cap-Ferrat pushed open its revolving doors. Thanks to a mini microclimate that suffuses the peninsula with even more sunny days than the Côte d’Azur’s habitual 300, the hotel remains a year-round retreat. The concierge can arrange a private after-hours visit to the Villa Ephrussi de Rothschild, as it can to former Cocteau home of Villa Santo Sospir just around the corner. 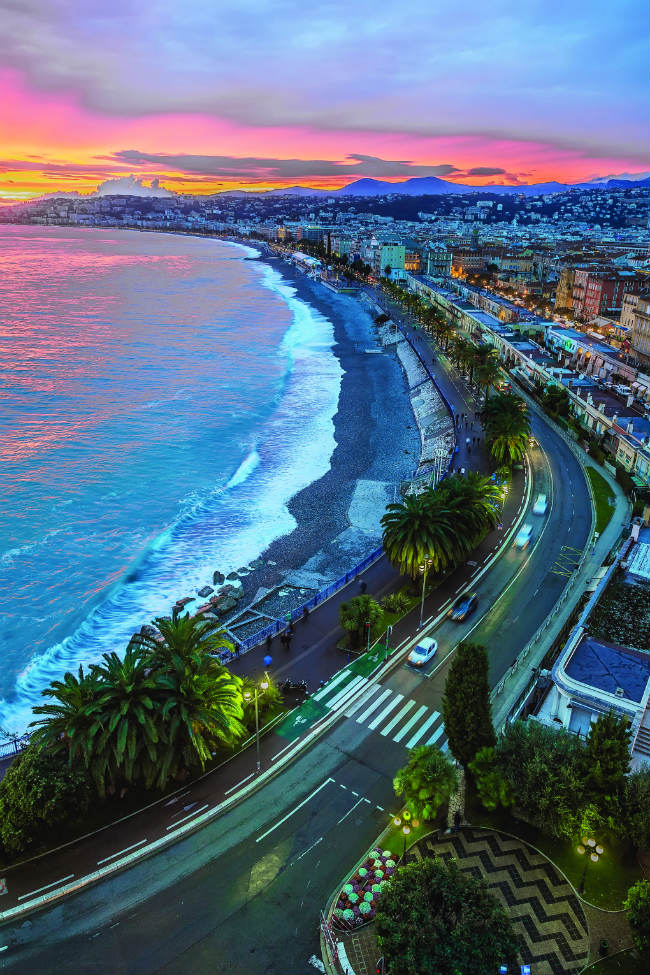 A few miles further east, Friedrich Nietzsche wintered in Nice for health reasons in 1883 – there’s a plaque outside his home on Rue de Foresta to prove it. For five successive seasons the sunlight eased his mental state. While hiking the 400m up to the ancient village perché of Èze, the German composed the third act of Also Sprach Zarathustra – the path twists and turns as tortuously as Nietzsche’s philosophical text. The trail should only be attempted in winter when wildflowers sparkle and sage and thyme garland the route.

The same piercing winter light shone on the hundreds of other artists and writers who made the Côte d’Azur their home. Matisse fled south from Paris and awoke to see the sun: “When I realised that every morning I would see this light again I couldn’t believe how lucky I was.” The names of painters who moved south – Picasso, Renoir, Léger, Chagall, Bonnard – read like the Sale of the Century at Sotheby’s. Although their respective museums that litter the landscape from Nice to Le Cannet are essentially empty in the off-season.

Whether that can be considered a shame or not depends on your view. Thanks to a dozen winter festivals and a new programme of year-round hotel openings, thousands more are discovering the off-season charms of the Côte d’Azur. Once again, the train tracks both east and west rattle with long-distance carriages running direct from Moscow (a luxurious 47-hour journey) and London (just nine hours with a quick platform change in Marseille). The French Riviera is just as sublime, and just as sunny, as it ever was.

For more information on visiting the region see www.cotedazur-tourisme.com 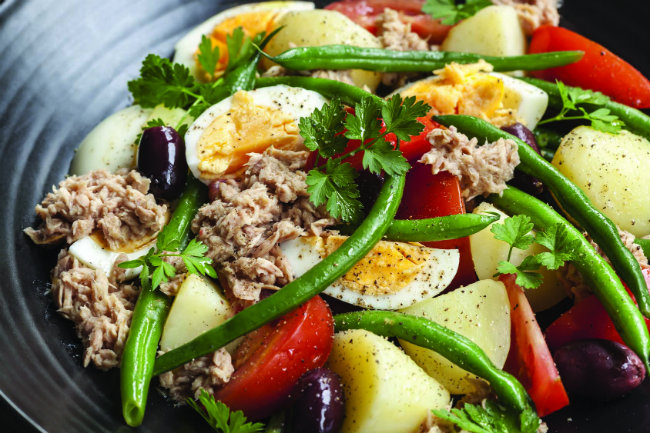 With its fair share of Michelin-starred restaurants plus a variety of homegrown dishes, the Côte d’Azur is a great place for both fine dining and rustic fare while overlooking the Mediterranean.

Niçoise cuisine is so tasty that city elders are bidding for UNESCO recognition of 90 key recipes including Salade Niçoise. Seasonal ingredients like these play a key role. With just 70 hectares under vine, AOC Bellet is among the smallest appellations in France, and the only one found entirely within city limits. The two indigenous grape varieties, Braquet and Folle noire, predate the Riviera’s Roman occupation. Look out for early vintages in the tasting rooms of Cave Bianchi (7 rue Raoul Bosio, Nice) in winter.

Mediterranean seafood comes into its own after New Year. Snap up a bag of oysters, urchins or bulots (sea snails) from Nice’s locals-only Libération Market. 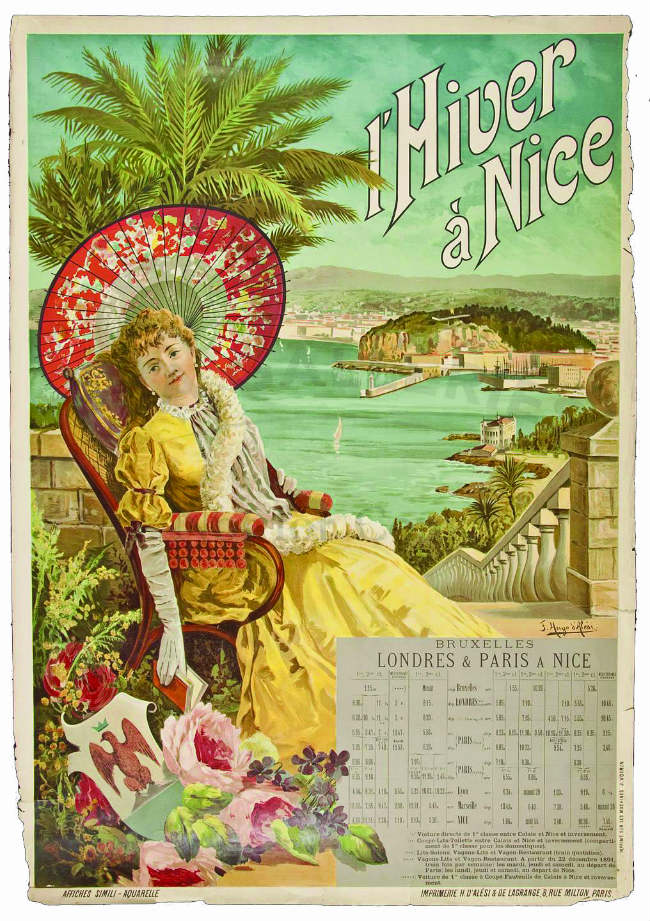