Where to Go Now: Nantes 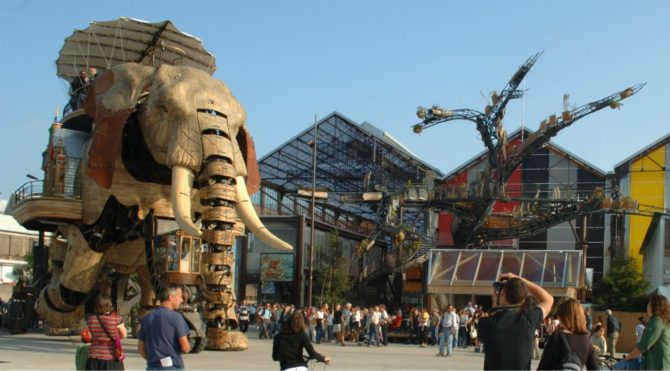 Just a two-hour TGV ride from Paris and you can be riding an elephant through the streets of Nantes. Named Europe’s Green Capital for 2013, the ancient port city is in the throes of a hip revolution- with fun new eateries, large-scale art projects, and the revitalized île de Nantes. This island in the Loire River used to be the city’s industrial center, and now, old warehouses (like the banana hangar) have been converted into cafes; stretches of waterfront are dotted with beach loungers; and sculptures by famous French artists like Daniel Buren line the quay.

Nothing captures this urban renaissance better than the Machines de l’île, a whimsical art project launched by a former street theatre troupe. They conceived a giant elephant—made out of sycamore wood and steel—that can actually stomp through the streets carrying 50 passengers on its back. As it tours the island, the 40-foot mechanical beast sprays water out of its trunk, dousing the crowd of bystanders who’ve gathered to snap photos. The elephant appears to be straight out of the imagination of author Jules Verne, the city’s most famous native son.

Other attractions include a giant carousel with three “layers” representing the marine world; sailboats cruise on the surface (offering excellent views over Nantes), fish “swim” beneath, and the abyss—closest to ground level—harbors strange deep-water creatures and giant squid. Each of these machines has mechanical movements that are controlled by the passengers (like the opening and closing jaws of a fish).  The Machines de l’île has other projects in the works, including a giant tree from which a heron– with a 24 foot wingspan—will “fly” over Nantes.

Visitors can gape at these fantastical machines on a tour through the artists’ workshop; tours are actually entertaining performances by staff who encourage the magic and wonder of the enterprise.

After you’ve indulged your inner child on the île, head to the top of the Tour de Bretagne for an aperitif overlooking the city. There’s a bar called Le Nid (“the nest”), which artist Jean Jullien designed to look like a bird’s nest, complete with a massive white bird whose body forms the bar counter.

Looking for lodgings in Nantes? We highly recommend the Radisson Blu, the result of a massive restoration project that converted the former Palais de Justice into a contemporary hotel. Behind the neoclassical facade, you’ll find a  glorious fusion of past and present by the interior architects at Agence Nuel. The restaurant, for example, occupies the old courtroom.