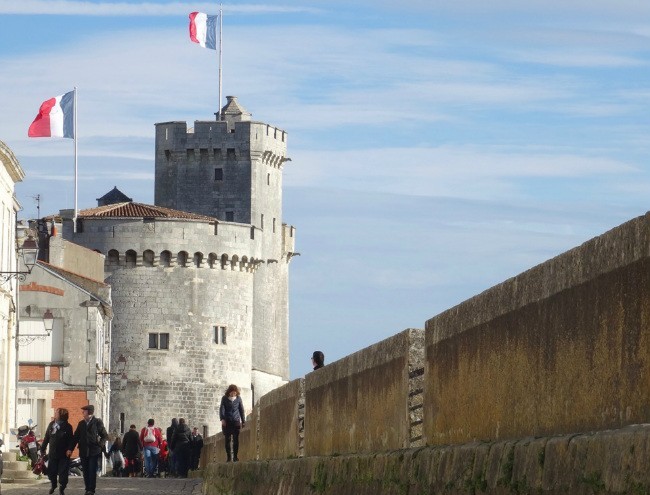 While everyone has been heading to the Christmas markets in France, I opted for a very different choice and headed to the seaside town of La Rochelle. I discovered an enchanting destination with good restaurants, great shopping and wonderful trails for bike riding or hiking. Best of all, the climate is gentler than Paris and I actually got my toes in the sand.

La Rochelle is on the Atlantic coast of western France on the Bay of Biscay and it is the capital of the Charente-Maritime department. The history of the town begins with settlements by the Gallic tribe, Santones, followed by the Roman occupation. During this latter period, salt and wine production were developed and expanded. The town of La Rochelle was founded in the 10th century and by the 12th century it had become a prominent harbour playing a decisive role during several battles. It remained the largest harbour on the Atlantic in France into the 15th century.

In 1185, La Rochelle was ruled by Henry II, king of England, who built the Vauclair castle which was destroyed in the Siege of La Rochelle (1224). Henry II was married to Eleanor of Aquitaine. Eleanor exempted the Knights Templar from various duties in the township of La Rochelle and so the town become the largest presence of the Templars on the Atlantic coast.

During the Renaissance La Rochelle was a Protestant enclave where there was little tolerance for the Calvinist and the Catholics. This play for power resulted in two Calvinist “heretics” being burned at the stake in 1552 and in 1562 thirteen Catholic priests were assassinated. Protestants continued to dominate La Rochelle until 1628 when Cardinal Richelieu staged a ruthless siege of the city resulting in 23,000 people starving to death. This marked the fall of Protestant control and a complete victory for King Louis XIII and the Catholics. There are two remaining towers from this era that have become landmarks for La Rochelle. They are the Tour de la Chaîne and Tour Saint-Nicolas marking the entrance to the old harbour. At one time there was a large chain linking the two towers to prevent ships from entering. Also from this same time period is the Tour de la Lanterne where you can climb to the top and get a glimpse of the graffiti by prisoners held here from the 17th to the 19th centuries.

Today, La Rochelle is known as “La ville blanche” or the White City because of its luminous limestone facades that glisten in the sun. The city is well preserved with cobblestone streets and ramparts for wandering and admiring views of the sea. Within the narrow winding streets are a plethora of boutiques, restaurants and charming details including the half timbered houses and the ghoulish gargoyles.

La Rochelle has 14 weekly markets in addition to the 19th century covered market in the town center that is open every morning. These are great places to sample local specialties and anyone who enjoys cooking will be inspired by the range of products and captivating spices.

Idyllic pathways wind within Parc Charruyer. The park is a gem that allows visitors to commune with nature. It was designed in the late 1800s following a bequeath by Miss Adele Charruyer (from a wealthy shipping family). The park offers a nature walk of about two kilometers along canals and streams. Within the heart of the city there is another park called Parc Charles-Edouard Beltremieux which is home to 350 bird species along with peacocks, deer, goats, ponies and Poitou donkeys. Both of these parks are open to the public at no charge.

The number of museums is impressive. The lovely Beaux-Arts museum offers a rich collection of paintings. The Musée d’histoire naturelle de La Rochelle is well worth a visit as is the Musée du Nouveau Monde. This latter museum focuses on immigration and the history of the slave trade through old maps, paintings and artifacts. The Aquarium is very popular and the performing arts center, La Coursive, presents a broad spectrum of theatre, music and dance. The Maritime Museum is housed on three floating ships.

La Rochelle is one of those unique destinations that offers something for everyone. It is not only kid friendly but it is also inviting to single travellers and it is without a doubt a romantic get-a-way. Best of all, it is only a three-hour train ride from Gare Montparnasse in Paris making it a perfect weekend trip from the City of Light. For more information, visit: www.larochelle-tourisme.com

Loui Franke is author of Parisian Postcards: Snapshots of Life in Paris