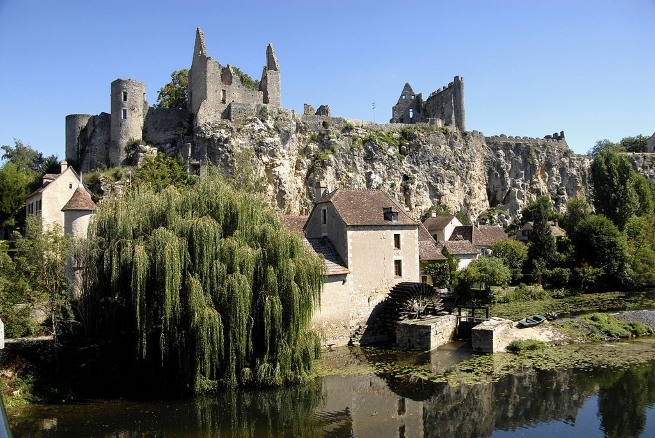 Anyone visiting the Poitou-Charentes département of Vienne for the first time should be aware that many of its ample assets – the rustic and the urban, the moving and motionless, the ancient and modern – are best observed through bright sunlight under cloudless skies. To admire the picturesque village beauty of Angles-sur-l’Anglin or the sublime, perfectly restored white stone carvings on the west front of Poitiers’ Notre-Dame Cathedral, the gentle waters of the River Gartempe behind the imposing Saint-Savin Abbey banks or the coral-hued feathers of a swooping stork at the Giants of the Sky show at Chauvigny’s ruined castle, a cloudless day is a clear advantage.

Thankfully, the good news for Vienne virgins is that, because the area is well south of the Loire (the giant river acknowledged as the north-south weather divider), such sights can be enjoyed against a heartwarming, cobalt blue backdrop for most of the year. Unlike many other parts of France, Vienne is perfectly within its rights to boast about both its past and its future when luring holidaymakers to its most famous tourist locations. And nowhere do tradition and innovation combine more potently than in the capital and cultural hub of the département, Poitiers.

Before a close-up look at its finest old buildings (among them, Palais Ducal (the law courts) and the churches of Sainte-Radegonde, Saint-Pierre and the aforementioned cathedral, Notre-Dame-de-la-Grande, stand out), or a foray into its city centre streets, rife with unusual shopping opportunities (such as one of France’s only remaining handmade umbrella shops), it is advisable to head up to Les Dunes for a majestic panorama of this plateau-topping city. There are two reasons for this. Firstly, the view allows you to get your bearings for any such exploration by foot, and, secondly, it highlights the otherwise unobvious fact that Poitiers is a kind of rocky island, formed by the loops of two rivers, the Clain and Boivre.

The incredibly grand Great Hall at the Palais Ducal, which fronts on to Place Alphonse, represents Poitiers’ real historical gravitas. In medieval times, it was the largest hall of its kind in Europe, and was used for ceremonies and trials. It was converted into a courthouse in the 18th century, and today is filled with lawyers ambling to and from court. Its unique feature is a wall that ingeniously bears both three chimneys and a 1390 stained-glass window.
Since the 15th century, Poitiers has been a university town, so it offers a lively combination of student buzz, with all the encumbent cultural diary-fillers, set against a bourgeois, genteel background. All in all, it has a very welcoming feel – a visit to the massive Sunday market on Place de Provence should confirm this – and is worth a good couple of days of anybody’s time. 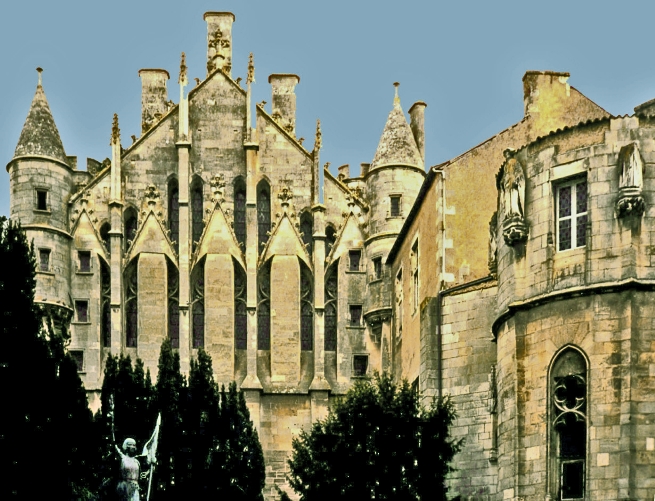 The futuristic side to Poitiers’s split personality can be found a few miles to the north. Parc Futuroscope, with its own TGV station, is almost a town in its own right. In essence, it is a giant theme park built in homage to technology, learning and fun. It is a place where kids and adults alike can learn, through films played out to gasps and screams on huge IMAX video screens, about subjects as diverse as space exploration and Brazil. It is like Disneyland with A levels, very much in awe of Americana, and at once educational and exhilarating. Spread over a massive area, you can happily spend a couple of days here, enjoying the 3D films and ‘rides’, like the fantastic airborne voyage through Vienne, which comes complete with rocking, rolling seats and hair-raising special effects.

Safe in the knowledge that the France of the future will be fun, if nothing else, leave Futuroscope and head to the Vienne countryside for a reminder that Old France had its moments as well. The département is split into several areas, each defined by the kind of terrain that dominates it.

East of Poitiers (most of the best attractions lie this side of the département) is the Gartempe Valley, a flattish region dotted with fortified farms, pretty villages and the kind of forests that locals go to for some fresh air and outdoor activity. One place to stop off and take a few snaps is the stunning village of Angles-sur-l’Anglin. For a fine vista of the gigantic château ruins that tower above this riverside haven, go to the Huche-Corne viewing point.

An altogether sadder reminder of faded glory can be found in a rickety little shop on the steep, narrow main street during summer months. Once upon a time, the women of the village kept their economy alive by selling their unique, if time-consuming, form of needlecraft, which involves making patterns by removing threads from white cotton material. Today, just two ladies, fighting to keep the tradition alive, sell their wares here to tourists.

The people of Chauvigny – a town along the N151 whose celebrated stone has been used in the foundations of the White House and the Eiffel Tower – would appear to be more keen on innovation than their neighbours in Angles. Chauvigny’s whopping five-castles-wide medieval ruins, which strike a formidable silhouette against a setting sun, have been ingeniously recrafted to accommodate a bird spectacle set to music called the Giants of the Sky, giving the town a new lease of life. All kinds of birds, ranging from vultures and kestrels to parrots and storks, float and swoop across the edgy crowd in the gloriously sun-trapped amphitheatre. The medieval Old Town, further up the hill, is a good place to indulge in a glass of wine or sample some local cuisine. Lamb, duck and beef are menu staples here, as are fresh fish and oysters from the nearby Atlantic coast. Goat’s cheese (chèvre) is made locally too, while local melon and asparagus are good in season.

A worthwhile detour on the way back to Poitiers from eastern Vienne is the quaint town of Saint-Savin. Vienne is an important heartland of ecclesiastical Romanesque architecture, and a major monument from that era dominates the town. It also houses one of the most remarkable ensembles of mural paintings from around 1100. The formal gardens behind the abbey church are well maintained, while the River Gartempe, replete with trout, flows quietly beyond its walls.

Book lovers keen to remain in a learning frame of mind will be in their element at Montmorillon. In the heart of the calm, river-strewn Pays Montmorillonais area in southeast Vienne, and otherwise known as Cité de l’Ecrit (City of Writing), the town was recently revamped as the area’s literary capital. Its pretty streets have over 20 bookshops, comic stores and print shops dedicated to the written word. The town is a great spot in which to browse for old posters and postcards, and has decent bars and restaurants in which to relax and pore over your buys. 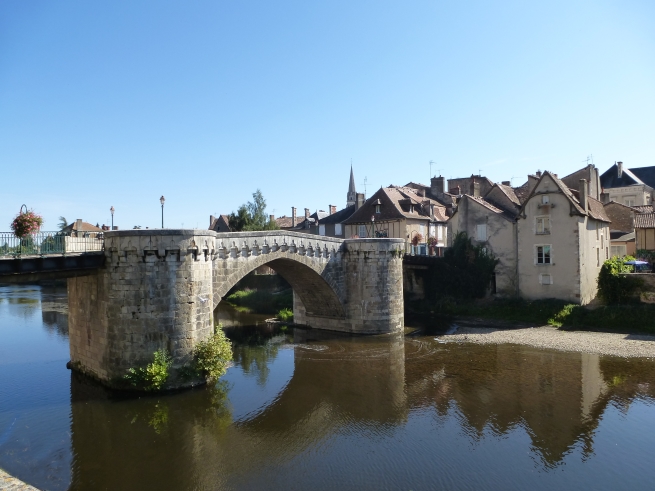 Eastern Vienne might have the most sites, but any honest snapshot of such a rich and varied département must include a mention of the pretty bocage country of Les Six Vallées to the west and the hilly Civraisien to the south. The great outdoors rules here, and French nature at its finest is on display: clean, unspoilt, peaceful and perfect for walking or cycling. If ever there was a corner of France to pack a bag, saddle up and head off on a gentle tour of chambres d’hôtes, this is surely it.

The balance of family fun and education – the difficult combination that so many French zoos and play parks strive to achieve – is the fine achievement the Vallée des Singes, near Romagne in southern Vienne. The concept is simple: let 27 species of monkey (except the gorillas and some scary-looking baboons) roam free among visitors, who in turn must be respectful of their furry ancestors and promise not to approach them or try to stroke them. The result is a triumph of modern zoo-keeping, with semi-tame animals enjoying the company of humans in a wild-ish environment. Scheduled feeding times allow visitors to enjoy lemurs and marmosets playing up to the camera. Just like Vienne as a whole, the zoo has managed to improve a traditional form of entertainment by using inventive thinking.

This charming département has taken the best bits of its nature and history and made them, where necessary, utterly relevant for today’s visitors.

Ryanair flies from Stansted to Poitiers.

From Paris, take the TGV Atlantique service from Gare Montparnasse or Roissy Airport to Futuroscope or Poitiers. For information about rail travel.

To get the most from Parc du Futuroscope, the futuristic theme park north of Poitiers, you will need a full day there.
The riveting Giants of the Sky bird spectacle in Chauvigny’s castle ruins. During July and August, there are four shows a day.
The wonderfully impressive Vallée des Singes (Valley of Monkeys) in southern Vienne allows visitors to wander around the park with over 20 species of semi-tame monkeys.

Previous Article Very Vendée!
Next Article The Route of Richard the Lion Heart