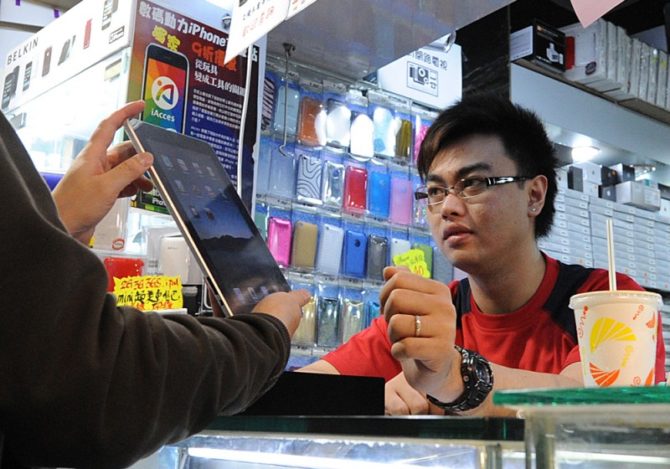 On Sunday, April 4, Senegal’s President Abdoulaye Wade announced the takeover of French military bases in his country. The announcement came on the 50th Anniversary of Senegal’s independence from France. The two countries had negotiated an agreement regarding the transition in February. According to the BBC, France has been reducing its military presence in Africa in recent years.

Le Monde reported on Friday, April 2, that France has suspended a shipment of arms to Pakistan under pressure from India, and over fears that Pakistan would not be able to protect French military technology from being pirated. There were also concerns that Pakistan’s unstable finances may not have allowed it to pay for the 1.2 billion euro ($1.6 billion) worth of military equipment.

Train service in France was disrupted on Wednesday, April 7, when workers for the national rail company, SNCF went on strike over job cuts, working conditions and lack of pay negotiations with management. However, most trains ran normally and international rail travel to and from France appeared not to have been affected. As of Thursday, the strike was still ongoing. According to Reuters, this is the third such strike this year.

Italian Prime Minister Silvio Berlusconi has met with French President Nicolas Sarkozy at a bilateral cooperation summit in Paris on Friday, April 09. The leaders of France and Italy have vowed to boost common efforts to protect Europe’s economy, and say they both support a possible support package for the Greek economy, Reuters reported. They also agreed to tighten cooperation in the planned rebirth of Italy’s nuclear energy industry. Greek officials are working out details of a rescue plan with euro-zone partners and the International Monetary Fund to prevent default. Fears of such a default have rattled currency and debt markets in recent months.

An explosion in a West Virginia mine killed at least 25 workers on Monday, April 5 in the worst U.S. mining disaster in over 25 years. The search continued Thursday for the four missing people who remain inside the mine. According to the New York Times, the poor record of the Massey Energy Company, the mine’s owner, has left many to believe Monday’s deadly explosion could have been avoided.

On Tuesday, April 6, President Barack Obama announced a new nuclear strategy for the United States as part of the Nuclear Posture Review, limiting the circumstances in which the U.S. would use a nuclear strike. Under the plan, the president pledged not to use nuclear weapons if the U.S. is attacked by non-nuclear states, regardless of the deadliness of the attacks. However, there is a loophole for nations which do not comply with the Nuclear Non-Proliferation Treaty, such as North Korea and Iran. Two days later, the U.S. and Russia formalized a historic nuclear arms control treaty under which the former enemies agreed to reduce the number of deployed strategic warheads to 1,550, a 30 percent decrease from the previous ceiling agreed upon in 2002. The treaty will also restore an inspection regime that expired in December, 2009.

Virginia Governor Robert F. McDonnell caused a controversy on Tuesday, April 6, when he proclaimed that April will once more be Confederate History Month in his state. The holiday, created by Republican governor George Allen in 1997, honors soldiers who fought on the side of the Confederacy against the Union during the American Civil War. The two previous governors, both Democrats, had refused to issue the symbolic proclamation. According to the Washington Post, McDonnell said the move is intended to promote tourism in Virginia, which next year will mark the 150th anniversary of the start of the Civil War. Critics however slammed the decision, with former governor L. Douglas Wilder on Tuesday calling it “mind-boggling to say the least” that there is no reference to slavery in the proclamation. McDonnell reversed his position late Wednesday, adding a section addressing the role slavery played in the war.

Mohammed al-Madadi , a Qatari diplomat sparked a terrorism warning on Wednesday, April 7 after he attempted to secretly smoke a cigarette in the bathroom on a flight bound for Denver, Colorado from Washington DC. When confronted, al-Madadi joked he was trying to light his shoes on fire, an apparent reference to shoe bomber Richard Reid, according to the BBC. Two F-16 jets were scrambled to intercept the United Airlines plane and escort it to Denver international airport. Al-Madadi was released after being questioned by U.S. air marshals. It is not clear whether he will face charges over the incident.

The United States sought to quell tensions with Afghanistan this week, following remarks made by Afghan President Hamid Karzai on Sunday April, 4, in which he threatened to join the Taliban if the U.S. did not ease pressure on him. On Wednesday, April 7, the Obama administration stressed that Karzai is “a figure that we respect,” according to the New York Times. This comes as the Washington Post reports that the White House is hinting it may cancel the Afghan president’s planned visit to Washington if the anti-western outbursts continue.

Apple computers announced on Monday, April 5, that it sold more than 300,000 units of its highly anticipated iPad on its first day on the market. According to the Independent, the sales figures “were hardly exceptional” for the new class of device, a cross between Apple’s popular iPhone and a laptop. However, sales did meet the expectations of most analysts.  Royal Bank of Canada’s Michael Abramsky noted in the New York Times, that because Apple is introducing an entirely new type of computing, consumer acceptance is likely to be a bit slower than with previous Apple products. The iPad has received largely positive reviews, though complaints about unreliable Wi-Fi connections have surfaced in recent days. Apple plans to introduce a more expensive version of the product which will run on AT&T’s 3G network, later this month.

Carmakers Daimler, Nissan and Renault announced on Wednesday, April 7, a new strategic partnership, under which they will share small-car technology and development costs. Also as part of the deal, the companies will each take a 3.1 percent stake in the other two companies. Renault and Nissan have had an alliance since 1999, but in this partnership the three automakers will remain separate.

It was reported on Wednesday, April 7, that United Airlines and US Airways are in merger talks, which if successful will create the second largest air carrier in the United States. According to the New York Times, only low-cost airline Southwest turned a profit last year, and this move is seen as an effort to streamline costs in a market with too many carriers and not enough customers. Stock prices for both companies rose on news of the possible deal.

On Thursday, April 8, Kyrgyzs opposition leaders claimed control of the central Asian country and dissolved parliament. This followed days of violent protests which forced the president to flee the capital. Former Foreign Minister Roza Otunbayeva said she will lead the new interim government for six months, after which new elections will be held. Opposition members had been rallying against President Kurmanbek Bakiyev’s corrupt and repressive rule. The BBC reports that the violence has left 75 dead and more than 1,000 wounded.  Kyrgyzstan is home to important American and Russian military bases, and the countries are watching closely as the situation unfolds. According to the Washington Post, there is speculation that Russia was partially behind President Bakiyev’s ouster in this former Soviet republic.

Maoist rebels ambushed and killed at least 75 Indian paramilitary soldiers on Tuesday, April 6 in central India. According to the New York Times, the brutal attack occurred in the midst of a massive anti-Maoist government campaign known as Operation Green Hunt. The Christian Science Monitor reports that the Maoists have a military presence in 22 of India’s 28 states. The rebels have been fighting since 1967. They claim to fight on behalf of India’s rural poor, and seek the overthrow of the Indian state.

British Prime Minister Gordon Brown announced on Tuesday, April 6, that general elections will be held on May 6 in the United Kingdom. The New York Times predicts that it will be “one of the most competitive and consequential ballots in modern British history.” The Times also reports that there is a good chance neither the conservative Tories, nor the ruling Labour party may win a clear majority. Various polls give the Tories leads ranging from 10 to four points, according to the Guardian.

Eugene Terreblanche, a South African white supremacist was murdered in his home on Saturday, April 3. Terreblanche, long a proponent of apartheid in the African nation, was killed by two black employees, reportedly in dispute over pay. Tensions have been high following recent public performances of the song “Ayesab’ Amagwala,” at African National Conference (ANC) youth events. Among the song’s controversial lyrics are the lines, “Shoot the Boer, shoot, shoot, shoot them with a gun.”  Boer is the Dutch word for farmers, applied to many white South Africans. Two weeks prior to the killings, judges had banned performances of the song as hate speech. South African president and ANC leader, Jacob Zuma has sought calm following Terreblanche’s death, warning that “agents provocateurs” might attempt to exploit the murder, according to the New York Times. The BBC reports that North West province premier Maureen Modiselle visited the Terreblanche family to express the government’s sympathies, as did members of the opposition, illustrating the complicated nature of modern race relations in South Africa.

On Monday, April 5, the website WikiLeaks.org released a video showing two U.S. military helicopters opening fire on a photographer and driver from the news agency Reuters. The incident occurred in July 2007, and 12 people total were killed.  According to the BBC, the helicopter gunners believed the journalist’s camera to be a rocket propelled grenade launcher. Shortly after the initial attack, the video shows a van arriving to pick up the wounded; the pilot then fires on the van, injuring two children inside. The American military investigated the killings in 2007, but determined that no disciplinary action was needed.

On Monday, April 5, the U.S. consulate in Peshawar, Pakistan was hit in a multi-pronged assault. The Taliban in Pakistan claimed responsibility for the attack, which left three guards and four militants dead. No Americans were hurt, and only sections of the compound’s exterior walls were destroyed. The New York Times reports that last week a Pakistani militant commander issued a threat to attack U.S. installations in Pakistan “to refresh the memories” of an attack on an American base in Khost, Afghanistan, in which seven American employees of the Central Intelligence Agency were killed. It is believed Monday’s actions were in retaliation for military operations launched last week against Pakistani Taliban forces.

On Saturday, April 3, Senegal revealed its controversial new statue, commemorating the country’s 50th year of independence. The $27 million Monument of African Renaissance is taller than the Statue of Liberty. Built by North Korean workers, the statue depicting a man holding a woman and carrying a child, has been met by thousands protesting its extravagant cost in this extremely impoverished nation. Others have attacked the statue for its sexist depiction and many Muslims have called it idolatrous, according to the BBC.