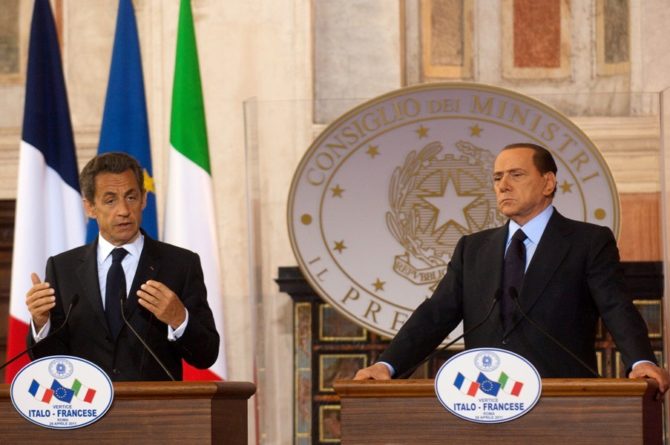 The investigation at the bottom of the Atlantic for the wreckage of Air France flight 447, which took the lives of 228 in June 2009 when it crashed en route from Rio de Janeiro to Paris, recovered the black box, officials announced on Wednesday, April 27, the Global Post and the Vancouver Sun reported. The black box recorder, however, was missing the memory unit that would allow investigators to determine the cause of the crash and subsequently determine fault, the New York Times reported. Officials said the location of the recorders does provide greater insight into the area of the mountainous Atlantic seabed most likely to lead to the recovery of the memory unit, which is believed to have become detached from the black box upon impact, according to Bloomberg.

French President Nicolas Sarkozy joined Italian Premier Silvio Berlusconi this week in calling on the European Commission to revise the Schengen Agreement, which allows for free circulation of people and goods between European Union member states, the Seattle Times reported. In a joint letter to José Manuel Barroso, president of the European Commission, the two leaders asked in vague terms for “new measures” and “internal norms” to regulate the circulation of immigrants between European nations[LA1] . Both France and Italy have seen growing tensions of late amid rising corporate competition and increased concerns over illegal immigration from conflict-ridden North African states. The Wall Street Journal explored the recent strife between France and Italy that stems from the increasing numbers of immigrants from North African states who use Italy as a gateway to circumvent French immigration regulations and enter France. The Guardian critiqued the request by the French and Italian leaders, calling it a regressive move that goes against the unifying intentions of the Schengen Agreement, initially passed in 1985.

The French government announced it would not pull its troops out of Afghanistan or respond to a video released on Tuesday, April 26, by al-Qaida in the Islamic Maghreb, showing four hostages held in Niger since September “begging” the French government to remove its military from the US-led military intervention in Afghanistan, UPI reported. The four men were among seven French nationals abducted in the Nigerien city of Arlit on September 16, three of whom were released in February, according to CNN. Minister of European Affairs Laurent Wauquiez quickly responded that it was not the role of hostage-takers to determine French foreign policy, according to le Parisien.

The French government signed a decree on Wednesday, April 27, creating the National Digital Council (CNN), an administrative body intended to address all issues related to the Internet, Reuters reported. In a speech about the creation of the CNN, President Nicolas Sarkozy invited Web business leaders to a G8 summit scheduled for the end of May to address international Web business regulation. Sarkozy used the occasion to criticize Internet firms for conducting business in France via the telecommunications infrastructure set in place by the French government but redirecting transactions to lower-tax nations, according to the Wall Street Journal. Bloomberg explained that many international Internet companies, such as Google, have their European headquarters in Ireland where the corporate tax rate is less than half that of France.

French dairy giant Lactalis bid €3.4 billion [LA2] on Tuesday, April 26, to purchase the 71 percent of Italian dairy producer Parmalat it does not already own, the Wall Street Journal reported. The offer, which would create the world’s largest dairy producer with €14 billion in revenue, came on the same day as French President Nicolas Sarkozy and Italian Premier Silvio Berlusconi held an annual summit in Rome, addressing various issues that have created tension between the two nations recently, notably the growing stake in Italian companies by French competitors, as explored by the Boston Globe. Berlusconi responded to the offer by expressing his desire for Italian companies to remain involved in Parmalat, according to France 24.

Marine Le Pen, the leader of France’s far-right National Front, said this week that “trouble-makers,” most notably “skinheads,” would not be allowed at the party’s annual May Day march in Paris to be held Sunday, May 1, the first one since she took over the party founded by her father in January, the BBC reported. L’Express explored Marine Le Pen’s recent efforts to widen the appeal of the National Front, which has historically been hindered by its association with ultra-nationalist movements and incidents such as the revelation just this week of a photo of a local party candidate giving a Nazi salute. NPR looked at Le Pen and other far-right parties across Europe, which have gained in popularity in recent years and which are of a different genre of populism than the Neo-Nazis who emerged two decades ago.