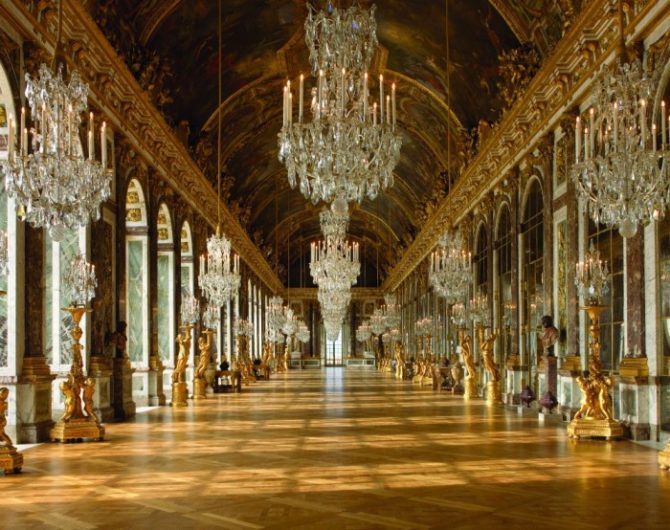 The construction of the Château de Versailles, the expansive palace and grounds 20 kilometres west of Paris where France’s Louis XIV set up court in the 17th century, was doubtless among one of the world’s greatest architectural and technological feats – it took 50 years and required 36,000 labourers. A flourishing of the arts perhaps never before seen in France accompanied the creation of the palace’s 2,300 rooms.

These include the jaw-dropping La Grande Galerie, known as The Hall of Mirrors, which was originally furnished with solid silver tables and chairs that Louis XIV melted down in 1689 to pay for the War of the League of Augsburg. Then there is the Salon d’Hercule, with a painted canvas ceiling that is the largest in Europe. In 1736, upon completion of the ceiling painting, Apothéose d’Hercule (Apotheosis of Hercules), François Lemoyne was named first painter to the King. However, hopelessly exhausted, he preferred to put an end to his life rather than face another royal commission.

When finished, Versailles was the largest royal domain in the world and it has continued to be an inspiration, even a template, for myriad forms of art and architecture ever since.

The Palace in Peril

“Versailles, like everything on a grand scale, is and will always be beautiful,” wrote novelist Alexandre Dumas in the mid-1800s. Yet despite these poetic words, the future of Versailles has been in doubt more than once since the French Revolution of 1789.

Given that historians estimate as much as 25 per cent of the entire national income of France once went to sustaining Versailles and its inhabitants, one might consider it outrageous to even try to maintain the Château amidst all the other difficulties France faces in the 21st century. And yet for its sheer audacity and the astounding human achievement Versailles represents, one can’t help but wish that its beauty could somehow be preserved forever.

Thankfully, despite the economic downturn, due to some innovative revenue-building efforts, several ground-breaking partnerships and the continued support of some of its oldest friends, the Château de Versailles may well be around for another generation to behold its glory. Catherine Pégard, President of the Public Establishment of the Palace, Museum and National Estate of Versailles, certainly hopes so, though the present keeps her very busy.

“Here at Versailles we like to talk in terms of centuries, but in the meantime we don’t have a second,” she explains, “because there is a leak in the roof; because the embroidery of a curtain must be repaired; because a piece of furniture is missing from a room, and we need to find the money to buy it.”

These are all a challenge at a time when the French government is calling on cultural institutions to tighten their belts, and even certain crucial renovation projects at Versailles were put on hold in 2013 when the state held back €170 million in subsidies.

Indeed, Versailles appears to have been hunting for money in earnest lately, launching an online boutique featuring a range of royalty-themed items and a line of gourmet products (www.chateauversailles-epiceriefine.com). However, some 60 per cent of Versailles’ revenue comes from ticket sales, and for Pégard, offering the public ever more access to the history and splendour of Versailles and its gardens is a higher priority than branding initiatives.

“In a period of economic crisis, especially in the cultural domain, we need to continue to move ahead,” she says. “We must continue the work of restoration and refurnishing, which allows us to open up new rooms and show new things to the public.”

A number of these initiatives are self-financed, like the restoration and refurnishing in 2012 of the Salon de Mercure to its former splendour as a Louis XIV-era ceremonial bedchamber. But if Versailles relied only on its state endowment and ticket revenue, it could never have achieved all it has over the last few years. This includes the opening of a sprawling, multi-roomed gallery space dedicated to the history of Versailles, ambitious digital and online initiatives, major restoration projects and multi-million Euro acquisitions of art and furniture. Such activity is only possible because Versailles, more than almost any cultural institution in France, generates patronage funding from private companies and individuals around the world – up to 20 per cent of its annual budget of around €100 million.

In 2011, thanks to French industry giants Sanofi-Aventis and LVMH, one of the countless masterpieces which disappeared in 1789 returned to Versailles, at a cost of nearly €7 million – the desk that Marie-Antoinette commissioned from Jean-Henri Riesener.

Last year, French patrons also paid for the restoration of the magnificent ceiling frescoes in the Palace’s Salon d’Abondance. And there is currently a multi-million Euro restoration of the Bassin Latone, the outdoor equivalent of the Hall of Mirrors, sponsored by Fondation Philanthropia of Geneva.

Versailles’ patrons are indeed international in nature, and one nation has showed particular generosity over the years.

“You could say that the Americans saved Versailles,” says Pégard. “The beginning of the history of patronage for Versailles is really the moment when John D. Rockefeller Jr. came to France after World War 1, in the 1920s, and saw the absolutely lamentable state the Château de Versailles was in.”

In 1924, Rockefeller wrote to the French president, Raymond Poincaré, asking permission to help: “These treasures… are part of the heritage of all nations, as their influence is a source of inspiration for l’art universel”.

Between 1925 and 1928 alone, the Rockefeller Foundation contributed $2,166,000 (the equivalent of nearly $30 million today) towards the restoration of Versailles.

Rockefeller was the first of numerous American patrons, and today Americans are by far the most numerous overseas visitors. In fact, during 2013, Americans made up 12 per cent of all visitors to Versailles. This may be in gratitude to Louis XVI for sending Lafayette and his troops to Washington’s aid or in recognition for the Treaties of Versailles and that of Paris in 1783, which ended the American Revolutionary War with Great Britain.

That special connection plays out every two years, with elan, when the American Friends of Versailles hosts a Grand Gala Extraordinaire benefit at the palace, which sees hundreds of VIPs flying in for evenings of dining and dance.

“Versailles is a world treasure, and everyone looks at it as this grand, opulent place,” says Hamilton. “But it’s extraordinarily fragile, and in tremendous need.”

The galas and other fundraising efforts have raised several million Euros since its creation in 1998, and restored the Bosquet des Trois Fontaines in 2004 and the Petit Trianon’s Pavillion Frais. In 2014, the group is sponsoring the restoration of the Queen’s Guard Room.

A tour of Versailles now begins with a walk through this new gallery, which allows visitors to discover how the Palace evolved from a hunting lodge under Louis XIII to the symbol of absolute monarchy at the behest of Louis XIV, and more practically, to comprehend the overall layout of the buildings and grounds before they embark on a long day of exploration.

Financed by Google and created with the internet giant’s engineers, this ground-breaking collaboration was, in effect, the first project of the Google Cultural Institute, a philanthropic organisation which develops technological solutions for viewing cultural material online.

The physical gallery is backed by www.versailles3d.com, where visitors can further explore Versailles’ history and also view online exhibitions, such as the two launched in 2013– The Construction of a Political Image, showing how art was an instrument of power for Louis XIV, and Immortalising Versailles, presenting images of the Palace since the 1800s.

For Amit Sood, director of the Google Cultural Institute, it’s no surprise that Versailles now has more virtual visitors (around nine million) than physical ones.

“In many ways, the Palace of Versailles and the people associated with it have themselves always been innovators,” he says. “For the construction of the Palace, Louis Le Vau, Charles LeBrun and André Lenôtre used cutting-edge techniques of their time and they’ve continued this journey of technological discovery with us at the Cultural Institute. Today it’s only natural that our engineers are working with Versailles and we’re delighted to do so.”

In President Pégard’s eyes, the Google history gallery, like the restoration and refurnishing projects, all get back to what she says is their greatest challenge, namely meeting the lofty expectations visitors have when they arrive at the Château, particularly when their numbers have doubled in only a decade to reach 7.5 million in 2013. Renovations of a whole wing of the palace, the Pavilion Dufour, began this year after state subsidies were finally released, to create a new visitor’s centre, which should further help.

“Our modern challenges start with the way we welcome the public,” she says. “We always come here with a certain idea of Versailles, with a dream in mind, and it’s important that the reality not be a disappointment.”

But if the expectation is really that Versailles “is and will always be beautiful,” perhaps we are indeed setting ourselves up for inevitable disappointment. But let us not forget what Alexandre Dumas was really saying, as is made clearer by the phrases following his quote: “Versailles… will always be beautiful. Though moss should cover its mouldering walls – though its gods of marble, bronze and lead should lie shattered around their broken fountains… though it should become but a heap of ruins – it will always present to the thinker and the poet a great and touching spectacle.”

It won’t help sell tickets, but maybe the really special aspect of Versailles is what it says about humanity’s ageless desire to create beauty, and our noble – and often futile – efforts to keep it from turning to dust.

* China at Versailles, Art and Diplomacy in the 18th Century: May 27 to October 26, Palace of Versailles. Some 150 works of art, furniture, lacquerware and porcelain follow the evolution of the taste for Chinese artistic productions since the reign of Louis XIV.

* Lee Ufan – Versailles, June 17 to November 2, Palace of Versailles. Following on from Jeff Koons and Takashi Murakami, Korean artist Lee Ufan will present the next contemporary art exhibition at Versailles.

* Models of the Imperial Navy, June 17 to September 14, Grand Trianon. Presenting 17 exceptional models of Imperial Navy ships, along with portraits of their sailors and the swords, rifles and other objects they wielded in combat.

* Japanese Chrysanthemums at Versailles, Autumn 2014, Grand Trianon. Direct from Tokyo to the Grand Trianon, for the first time since Exposition Universelle in Paris in 1900, two giant Ozukuri chrysanthemums will be presented in France.

* Follow the restoration of the Bassin de Latone online: www.latone.chateauversailles.fr

Stunning Places to Stay for Your Champagne Adventure