Explore Bordeaux: The Port of the Moon, Reborn 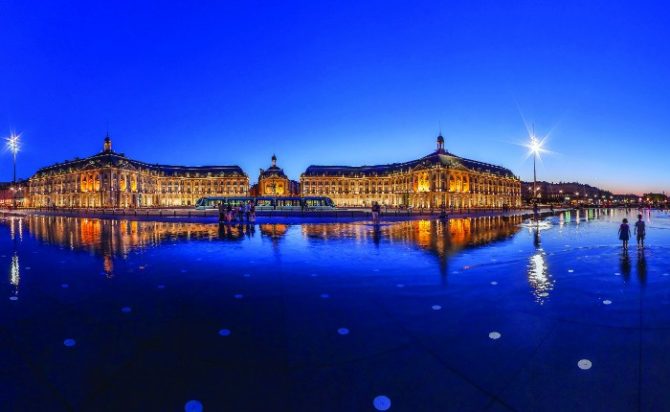 During the early 2000s, I lived in the French countryside, not far from Bordeaux. Sometimes, the charms of the rural life waned a little so we would dig out some smarter clothes and head to Bordeaux for a brief taste of city life, a little culture and some shopping. But we had ambiguous feelings about our forays because, in those days, the city was blighted by traffic and the construction of new tramlines had turned many of Bordeaux’s streets and quaysides into noisy construction sites. What I didn’t fully appreciate at the time was that Bordeaux was only half-way through a 20-year rejuvenation project started by its Mayor, the former French Prime Minister Alain Juppé.

A decade or so later, I’m delighted to report that the dust has literally settled, and although the historic maritime trading port still has ambitious urban growth plans, its old quartiers and quaysides can breathe again, and a pedestrianisation programme has transformed the ambiance and atmosphere of the city.

Classified as a UNESCO World Heritage Site in 2007, Bordeaux sits proudly on the Garonne River, just a few miles from where it joins the mighty Dordogne. The two great waterways flow together, out to the Atlantic, through the Gironde Estuary, wetting the banks of some of the world’s most famous wine appellations – such as Pauillac, Margaux, Saint-Estèphe and Saint-Julien – along the way.

The wine and the river: these are the twin glories of Bordeaux’s heritage. Wine production dates back to Roman times but it was British claret consumption that transformed a modest domestic market into what would become an 800-year dynasty of viticulture and commerce. When King Henry Plantagenet married Eleanor of Aquitaine in 1152, she brought the fertile territory of Aquitaine, including the city of Bordeaux, to the English throne. The subsequent boom in wine exports to Britain became a founding stone of Bordeaux’s trade.

Today, Bordeaux wine is world-famous and needs little introduction, yet a trip to the city wouldn’t be complete without a dégustation or an excursion to the vineyards. The École du Vin de Bordeaux, housed in a beautiful 18th-century building, is a great place to start if you wish to demystify the wonders of wine-tasting and then test your new-found expertise. You can also visit the Musée du Vin et Négoce to find out more about its history.

Beyond the suburbs, a day trip to one of the châteaux or vineyards which surround the city will give you a more lasting memory and appreciation of the terroir and the wine-making process. Or best of all, spend a few days staying at one of the numerous château hotels set amongst the calm of the vineyards, where you can soak up the historic atmosphere and sample some delicious Medoc Grand Crus.

The Cité des Civilisations du Vin, which is set to open in 2016, will be a spectacular new exhibition centre on the banks of the Garonne, celebrating the long history and cultural significance of wine to all of the world’s civilisations. The aluminium and glass building, designed by Anouk Legendre and Nicolas Desmazières of XTU, is a swirling and sensuous creation intended to evoke l’âme du vin (the soul of wine).

The new building’s location underlines the vital role played by Bordeaux’s other greatest asset: the river. Looking back over the centuries, the Garonne has provided the trading opportunities which are essential for mercantile success. Now, thanks to some large-scale urban planning, the future of Bordeaux also places the river at the heart of the city, with some ambitious growth plans allied to a visionary determination to become a contemporary, green and rejuvenated world-city. These impressive projects illustrate a new civic pride – the 2013 opening of the Pont Jacques Chaban-Delmas, Europe’s largest lift bridge, which spans the Garonne and connects the city’s Bastide and Bacalan districts, prompted a colossal public turnout.

In the same area, the up-and-coming Bassins à Flot urban regeneration programme is tackling 700,000sqm of former dockland and will provide over 5,000 new apartments and public waterside attractions.

And that’s not all. In 2017 the LGV Sud Europe Atlantique high-speed train network will open, linking Bordeaux to Paris in just 2.5 hours. With this promised increase in ‘real time’ proximity to both Paris and Spain, the city’s planners and financiers are once again casting their eyes ambitiously over the more distant horizons, and preparing for a surge in population.

MECA (Centre for Creative Economy and Culture in Aquitaine) will open in 2017 and the area around the Gare de Bordeaux-Saint-Jean will see one of France’s largest urban development projects, featuring 15,000 new homes plus multiple offices and shops. The revitalised station will become France’s second largest rail passenger terminus.

Bordeaux once turned its back on the city’s old quays, with their rundown warehouses and semi-industrial activity, but now the commercial port has been moved away from the centre, the historic entrepôts have been renovated and re-invented as restaurants and cafes, and a broad, beautiful window onto the river has been opened.

The affectionate old name for Bordeaux was Le Port de la Lune (The Port of the Moon), reflecting the crescent – or croissant – shaped line of the docks along the river. Now there’s evident pride in reclaiming this architectural heritage. It’s not unusual to see cruise ships arriving quay-side, their passengers admiring the grandeur of the 18th-century public buildings which proudly watch over the river.

The quays form a sinuous curve which runs from Chartrons, the old wine merchants’ quartier, and winds its way around the front of the Place de Quinconces, with its famous column and fountains, the Monument aux Girondins. Then it’s past the Miroir d’Eau, the world’s largest reflecting pool, which creates a magical mirror image of the 18th-century majesty of the Louis XV-commissioned Place de la Bourse, and on to Napoléon’s Pont de Pierre.

The quays have effectively become Bordeaux’s lungs – there’s space for strollers, cyclists and joggers to meander along the wide walkways, taking in the grand, honey-coloured stone facades which mark the edge of the city’s left bank. Passing the Pont de Pierre, you’ll catch sight of the spire of Basilique Saint-Michel, which entices you away from the river, to discover the historic districts of the vieille ville.

Chartrons, to the North, is where the trendy crowds shop for vintage and designer wares, second-hand books and antiques, while the Saint-Michel quartier offers a cosmopolitan mix of student life, with thriving markets (including the Marché des Capucins), second-hand stores, many budget restaurants, Asian and Moroccan eateries and outdoor cafes. At last, you can walk from street to street and place to place, largely without running the risk of getting run down by a voiture or filling your lungs with diesel pollution.

Saint-Michel is so much quieter than it used to be and this sets the mood – now you have time to pause and appreciate just how many of the old Medieval and Renaissance buildings have been restored and cleaned.

Wandering the lanes from Saint-Michel, you can perhaps head for the famous landmark of the Grosse Cloche neighbourhood, with its charming mix of traditional artisan bakeries and boutiques. A further short walk takes you to the Tour Pey-Berland, which offers a spectacular view of the city from its summit, and the Cathédrale Saint-André. Not so long ago, these were impressive yet soot-stained monuments marooned in a whirlwind of traffic. Now the transformation is quite breathtaking. The white-stone buildings are pristine and gleaming, there are acres of newly-paved walkways and piazzas, and you’re more likely to hear the quiet hum of a tram than the rumble of cars. At the other end of this dramatic public space lies the Palais Rohan, which serves at the Hôtel de Ville and is also home to the Musée des Beaux-Arts de Bordeaux. The tower, cathedral and Palais are all UNESCO-listed monuments.

Bordeaux offers some great dining experiences and there’s something for every budget – gastronomes should head for the Saint-Pierre quartier, where dozens of restaurants compete for epicurean accolades. The Tourist Office has some great gourmet walking tours featuring regional specialities – and, for ultra-fine dining, Bordeaux is seriously on the up. At the top of the tree sits Joël Robuchon, the world’s most Michelin-starred chef, who’s installed at Bernard Magrez’s La Grande Maison.

Ten years ago, on damp winter days we used to drive into Bordeaux to sniff around the antique shops. We’d look forward to a long, warming lunch at La Tupina, a kind of rustic Aquitaine hostellerie in the heart of the city. To see and feel the warmth of its open fires and savour the aromas from the open-hearth grills at this incontournable was a kind of secret we imagined that we shared with just a few friends. Of course, the word has long been out and it’s good to see it still going strong and spawning cafes and épicerie offshoots.

Grands projets and long-term urban regeneration are things that the French do exceptionally well – we’ve seen it in Marseille, Lyon, Strasbourg and Montpellier. Now Bordeaux competes with those other fine cities for international attention, and rightly so. Over the last few years, Bordeaux, the city known as La Belle au Bois Dormant (The Sleeping Beauty), has awakened and her hidden charms have been revealed for us all to enjoy.

Where to Stay & Places to Eat

Château Cordeillan-Bages: Luxurious accommodation and fine dining in the heart of the Pauillac vineyards.