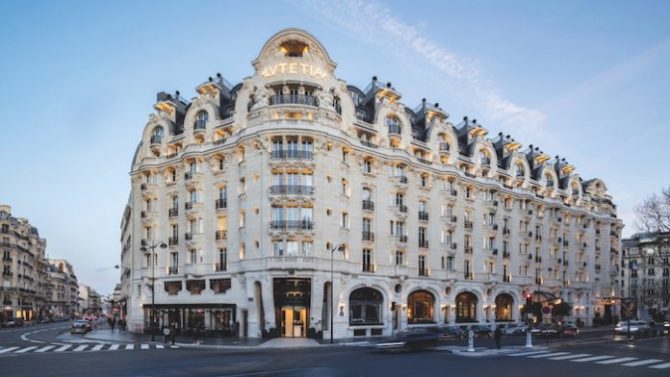 Two recently restored historic hotels – both recipients of the coveted Palace distinction – exemplify their neighbourhoods on opposite sides of the Seine and hold unique places in Parisian hearts and history, writes Jennifer Ladonne

Back in March 2013, the landmark Hôtel de Crillon shocked Paris with the news that this historic ‘grande dame’ hotel, a veritable icon of Right Bank elegance, would close its doors for at least two years while it underwent sweeping renovations. Then, a year later, the Hôtel Lutetia, the Left Bank salon so beloved of generations of artists, writers, intellectuals and politicians, announced that it would be following suit. For both hotels, the projected two-year, top-to-toe transformation turned into a four-year operation as each took on the delicate – and staggeringly expensive – task of rehabilitating a Paris institution while remaining true to its history. But there was another consideration: how to join the rarefied ranks of Paris’s 10 Palace hotels? 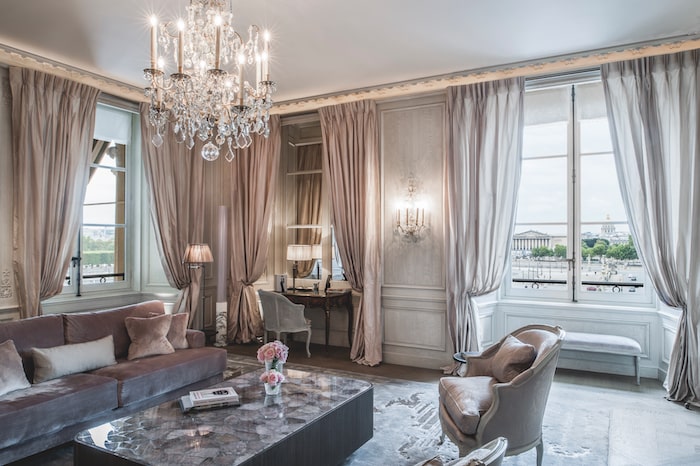 For 110 years, the Hôtel de Crillon, which stands at the foot of the Champs-Élysées, on the Right Bank’s place de la Concorde, and the Lutetia, which is just across the river in chic Saint-Germain-des-Prés, have personified a very Parisian art de vivre. Separated as they are by the river Seine, each hotel represents a different, yet equally vibrant, part of the beating heart of the City of Light.

The Crillon’s distinguished history started long before it opened its palatial doors to the public in 1909. It began in 1758, when Louis XV decided to transform the muddy wasteland to the west of the Louvre into a royal square and hired Ange-Jacques Gabriel, the star architect of the day, to draw up plans for four majestic façades on the northern side of the plaza. 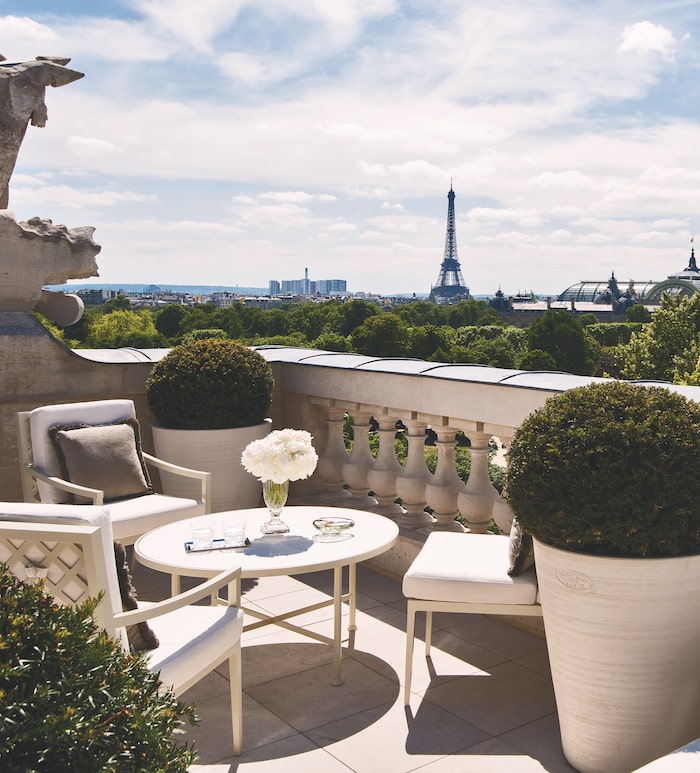 In 1775, Louis-François Trouard, controller general of the king’s buildings, bought the façades at auction and transformed the colonnaded front into a grand mansion, which he promptly leased to the Duc d’Aumont. The duke’s extravagance in decorating the new interiors extended to pinching craftsmen from Versailles and enlisting a brilliant young architect, Pierre-Adrien Pâris, to embellish the mansion in the grandest Classical style. Aristocrats flocked to its drawing rooms and the young Marie Antoinette took piano lessons there, in a room that still bears her name.

In 1788, the building was sold to François Félix Dorothée des Balbes de Berton de Crillon, the future Duc de Crillon. It remained in the Crillon-Polignac family until 1907, when it was sold to the Société des Grands Magasins et des Hôtels du Louvre to be transformed into a hotel. 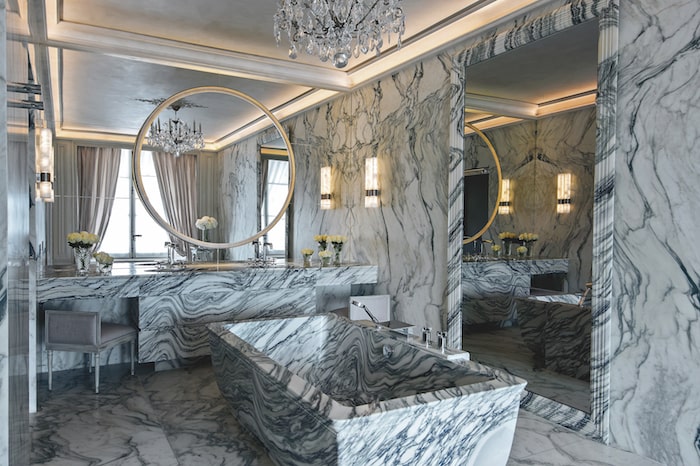 Grand hotels, the fashion of the day since the arrival of the steam engine and advances in transport and trade, had been springing up around Paris since the 1850s, most coinciding with the World’s Fair. With running water and electricity, they were the epitome of modern design. The Hôtel de Crillon, however, guarded its old-world majesty. Remaining true to its historic setting, exquisite décor and 18th-century splendour, the hotel lovingly conserved parts of the original interiors when it opened.

From the beginning, the Crillon was crowded with royalty and heads of state – the Queen of Holland, the King and Queen of Denmark, King George of England, presidents Theodore Roosevelt and Woodrow Wilson, to name but a few. In 1919, the peace conference that led to the formation of the League of Nations was held in its salons. Artists and writers were also seduced – Ernest Hemingway, for example, described the Crillon in his 1926 novel The Sun Also Rises. 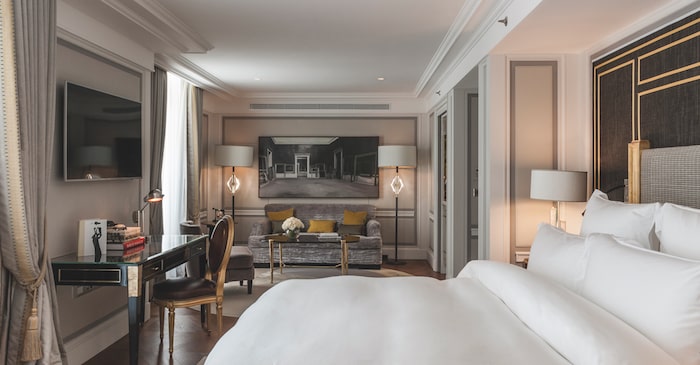 The Hôtel Lutetia was built by the heirs of Aristide Boucicaut, the founder of Le Bon Marché, Paris’s first department store (which still stands across the pretty square Boucicaut) as a place for vendors and shoppers from the provinces to stay while they were in the city. From the day it opened, in 1910, its billowy white façade (in the late Art Nouveau style) sumptuous interiors, music played from the salon balconies, and ultra-modern add-ons (air conditioning, hot water, telephones to call reception), made it an immediate hit with the Saint-Germain-des-Pres set.

Perhaps the most famous moment in the history of the Lutetia, however, was the time it played its part in France’s darkest hour. On June 10, 1940, Charles de Gaulle, who was dining at the hotel, was alerted that a car was waiting outside to drive him to Tours, where the French Prime Minister and government officials had fled the day before, as the Germans marched toward Paris. He was to leave immediately, without finishing his meal. According to French author Pierre Assouline, who delved into the hotel’s history for his best-selling novel Lutetia, De Gaulle insisted on paying the restaurant bill before he left.

The man who would become the President of France after the war – and who had spent his wedding night at the hotel in 1921 – was one of a coterie of intellectuals and politicians from the nearby Assemblée Nationale to have adopted the Lutetia as their home from home, and he evidently hoped that when he eventually returned he would be remembered as a man who honoured his debts…

The Hôtel Lutetia’s penthouse suite offers views over the city from the other side of the river. Image © Anthony Parkinson

Four days later, on June 14, 1940, the Germans marched into Paris. The Crillon was the first hotel they seized, on the very day they arrived; the Lutetia was the second, just one day later. Officers ransacked the larders and wine cellars, and seized the salons for their offices and bedrooms.

The Lutetia served as the headquarters of the Abwehr, the German military intelligence service, from June 15, 1940, until August 1944. De Gaulle did return after the war, and moved the repatriation operations from the Gare du Nord to the Lutetia. The hotel, always a warm and welcoming home to the general, seemed a graceful place to receive traumatised survivors of the Holocaust. For months after the Armistice, family members and friends came to the hotel for news of missing loved ones. 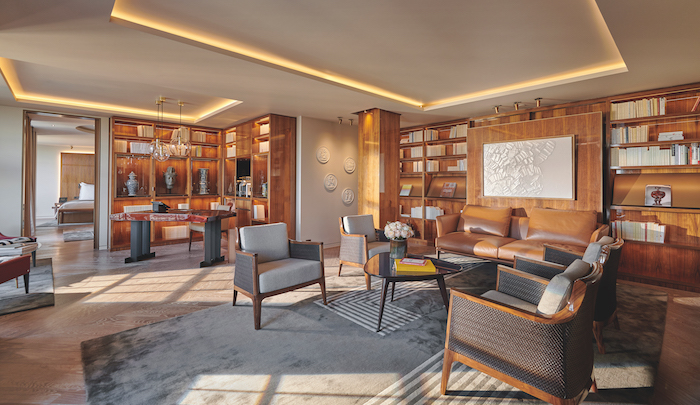 The living room of the Presidential Suite. Image © Hôtel Lutetia

As France transitioned from the war years to the Trente Glorieuses, the Lutetia and the Crillon slowly resumed their lives as beacons of Left and Right Bank luxury and hospitality, and as the meeting places of the literati and glitterati. The champagne flowed in the 1950s as both institutions passed through the hands of the Taittinger family (the Lutetia still pours Taittinger’s Cuvée Lutetia). In the 1970s, Paris fashion designer Sonia Rykiel was tapped to redecorate both the Crillon and the Lutetia. Today, at the entrance of both hotels, guests will see a version of César’s iconic Pouce (Thumb), commemorating this very Parisian artist’s love for his Left and Right Bank homes.

At its reopening on July 5, 2017, the Crillon, now owned by Saudi Prince Mutaib bin Abdullah and managed by the Rosewood Hotel Group, dazzled Parisians, and threw them a few curve balls in the process. The Ambassadeurs’ soaring, intricately painted 18th-century ceilings, above the historic room that was formerly the gastronomic restaurant, now cast a mellow glow over the Parisian bar, golden and intimate in a luxurious redesign. 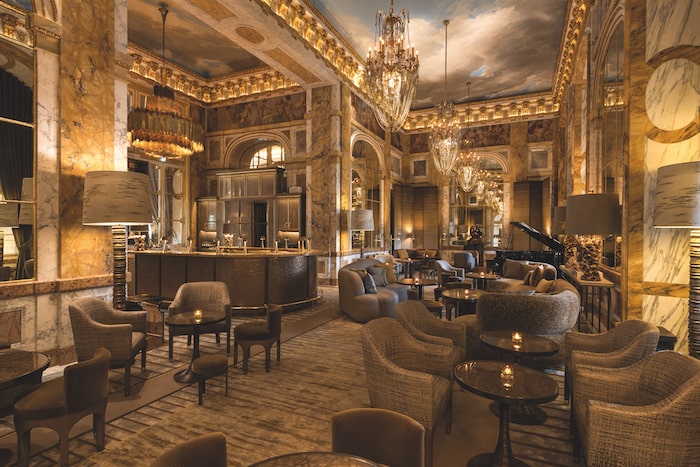 The team, headed by architect Richard Martinet and artistic director Aline Asmar d’Amman, working with a team of four architects and interior designers, took the hotel’s 18th-century heritage and ran with it, hiring 250 mostly French artisans to achieve just the right balance between sepia-toned elegance and contemporary luxury. D’Amman cajoled an initially reluctant Karl Lagerfeld into creating Les Grands Appartements, the most eye-popping of the hotel’s eight signature suites, crowned by a two-tonne bathtub carved from a single block of Carrera marble. The Marie Antoinette suite, a marvel of feminine elegance, channels the royal visitor, “whose spirit reigns over the hotel”, as director of guest relations Cédric Waterkeyn puts it.

Each of the hotel’s 124 rooms, a number significantly down from 147, boasts a unique design, with original artworks from the hotel’s vast collection, which spans from the 18th to the 21st centuries, lavish wall coverings and lighting, and a chic, ancient-meets-modern mix of precious antiques and vintage and bespoke furnishings. 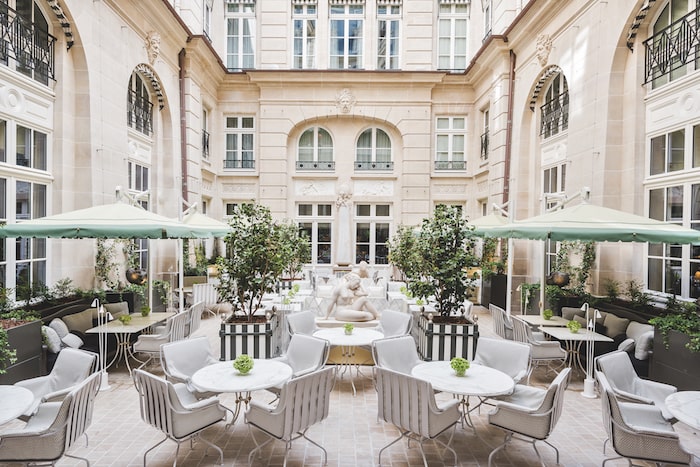 Waterkeyn, who orchestrates the Crillon’s 24-hour butler service – a courtesy unique in Paris, and extended to every guest – sums it up: “Some [hotels] have kept the spirit of the 18th century, some have truly modernised, but to find that fine balance between the 21st and the 18th century, that harmony between the two, is a truly remarkable accomplishment.

”These concerns were shared by the team renovating the Lutetia. “The challenge facing us was to breathe new life into an establishment while respecting its roots, its identity and its personality,” explains Jean-Michel Wilmotte, the Paris-based architect whose winning redesign for the Lutetia proposed removing an existing salon to create a luminous interior courtyard, reimagining the hotel’s floor plan (reducing the original 233 rooms to 184), and introducing ecological, state-of-the-art technology. In the service of freeing the light, Wilmotte’s team of top artisans and restorers uncovered delicate frescoes that can be seen in the Bar Joséphine – named after Josephine Baker, another frequent guest – and the reception area.

The Bar Joséphine is named after Josephine Baker, the American- born entertainer who was once a regular here. Image © Hôtel Lutetia

Wilmotte and his team custom-designed everything for the new hotel, from the glass sconces, floor treatments, walls and door handles to the taps and lighting fixtures. Sleek lacquered eucalyptus wood panelling in the hallways and rooms, some dyed a regal Bleu de France, is interspersed with miles of snowy Calacatta marble in the bathrooms, spa, pool and hallways, along with mirrors, brass and glass, to create a sophisticated, contemporary feel echoing the clean, chic lines of Art Deco.

Artworks from the hotel’s 280-piece collection are scattered throughout the rooms and salons, along with commissioned works, like the splashy glass canopy by Fabrice Hybert topping the Salon Saint-Germain, now one of the hotel’s two gastronomic restaurants. The other is the Brasserie Lutetia, which is overseen by the three-Michelin-star chef Gérald Passedat. 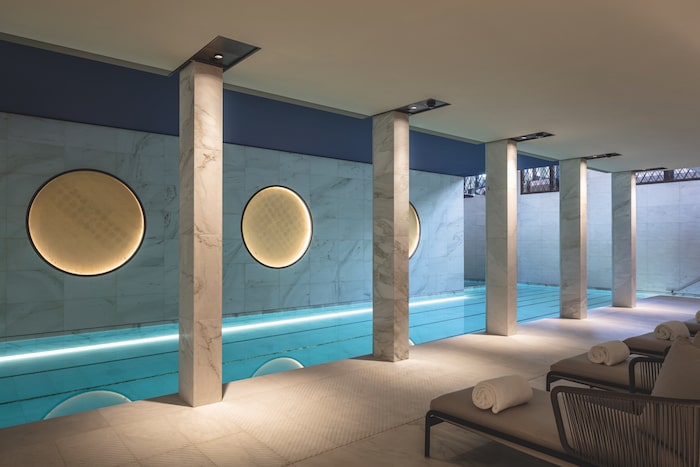 The Lutetia, too, has incorporated spa facilities into its renovation. Image © Hôtel Lutetia

It was reported at the time of the hotels’ closures that both would reopen with a swimming pool, something each lacked, and a sure sign of their intentions, as this is one of the many prerequisites for a hotel striving for France’s coveted Palace status. The Palace designation was established by the French Ministry of Tourism in 2010. Beyond the stringent set of guidelines that govern the five-star ranking (multilingual staff, spacious rooms, valet service, a spa and fitness area, restaurants etc) for a hotel to become a Palace, it must have something extra, something ethereal: significant architecture, location, history… in short, a story. No surprise, then, that the Crillon and the Lutetia – the former’s elevation was announced in September 2018 and the latter’s in October 2019 – both won the distinction within a year of their reopening, bringing the number of Parisian Palaces up to 12.

The Lutetia is the only Left Bank hotel to hold the status. “It is French excellence, a mixture of tradition and modernity in consonance with the most demanding standards in a magical setting,” explains Caroline Leboucher, CEO of Atout France, the organisation that awards the designation. “[These hotels] contribute to the global influence and incomparable excellence that Paris evokes in the universal collective imagination and perfectly embody the best of French art de vivre.” No one could say it better. 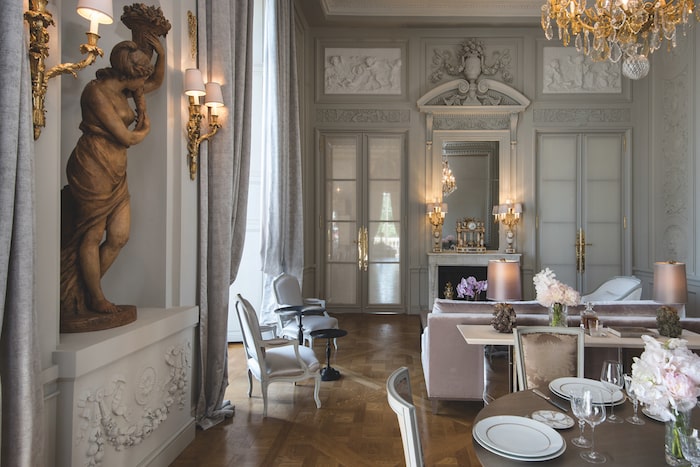 Previous Article My Life in Paris: A Touch of Reine Fall
Next Article Restaurants: La Musardière in Giverny