Le Strato: Where to Stay in Courchevel 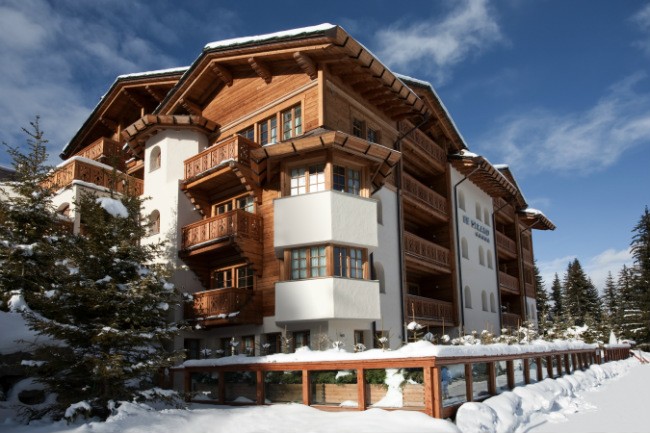 The family has a long history in Courchevel; in 1952 Laurent Boix-Vives built one of the first ski lifts, the Marquis in Courchevel 1650, which made it possible to access high altitude ski slopes. In 1956, he took an interest in the Isère Rossignol factory, which quickly became famous, selling more than four million pairs of skis per year. Later, Laurent Boix-Vives made skiing history with the invention of a revolutionary model, called the Strato.

Laurent and his wife Jeanine inaugurated the hotel in 2009 and it quickly became one of the top hotels in Courchvel. Today the Strato is run by the couple’s daughters, twins Christine and Sylvie.  A luxury chalet with 25 rooms and suites, the Strato is nestled at the foot of the Cospillot piste, just five minutes from la Croisette. Guests are spoiled with breathtaking views of the mountains and snow-dusted forest.

A five-star hotel, the Strato was designed by the architect Jean-Pierre Jourdan and the decorators Les Héritiers, who chose wood and glass to create a perfect combination of refinement and alpine authenticity. The rooms feature luxury throws, wool armchairs, oak floors and custom carpets. They are also equipped with all the latest technology- like a TV hidden behind the bathroom mirror. From your terrace, enjoy the beautiful vistas.

Rounding out the impressive facilities, the Sothys spa offers exceptional skin care treatments. This massive spa boasts a heated pool with a panoramic view of the mountains. Designed with slate and a black Murano glass chandelier, the spa features saunas, hammams, a hair salon, and even a fitness room where you can book a personal trainer. The Strato also offers yoga classes.

Last but not least: This exceptional boutique hotel even boasts a ski room, where you can rent equipment.

Previous Article The Buzz in Silicon Valley: Le Festival of French Animated Films
Next Article Infographic: why do people ski in France?