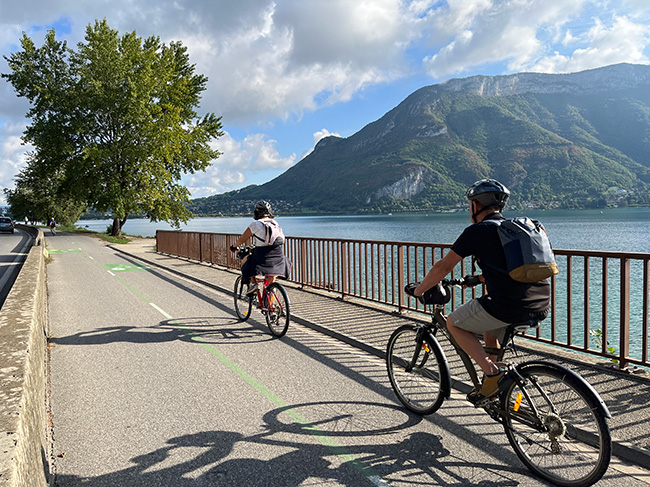 Millions of years ago, colliding tectonic plates created the Alps. A few million years ago, powerful, shifting glaciers carved out a lake and valley around Annecy. A couple of decades ago, the cycling enthusiasts of this region built a bike path that circles the lake, instantly creating one of the most beautiful and popular bike paths in all of France.

On a recent visit to Annecy, one of the cycling centres of the Haute Savoie (northern) region of the French Alps, I learned to appreciate all these millions of years of geological wonders as I pedalled around the 40-kilometre Lac d’Annecy bike path. It’s such a beautiful loop that I did it twice, first counterclockwise, and then clockwise, and explored several villages and plages just off the path, as well as riding up a long, steep col (mountain pass) often featured in the Tour de France.

Enjoy the stunning views after the difficult ascent © Steve Wartenberg

So, which direction is better?

I can’t decide. I may have to return to Annecy to do more research (what a shame!). During my first ride, it was a clear, sunny day and the Alps glistened and rose nobly above the shimmering lake. On my second circle, it was a grey, overcast day and the cloud-covered mountains took on a different, more mysterious presence.

From anywhere in Annecy, pedal toward the lake and you’ll eventually find the bike path. There are a lot of bicycles, pedestrians, scooters, and vehicles on the roads of this popular city, especially in and around the Vieille Ville. So, be careful, be patient, especially at intersections and obey all the traffic signals. The traffic thins out considerably after only a few kilometres in either direction, and you’re quickly immersed in all the beauty that surrounds you and your bike.

The path completely circles the lake, with only several kilometres on the D909 road. If you think of the lake as an elongated, Dali-like clock, the “on the road” section is from one o’clock to a little after two o’clock.

Whether you’re by yourself or cycling with a group, it’s an ideal bike path © Steve Wartenberg

Visit the Villages and Plages

Heading clockwise, from Annecy, the path goes east, through the park, and then turns south and parallels the lake, only a few feet from the water. The first 10 kilometres are lined with charming villages (Chavoire, Veyrier-du-Lac, Menthon-Saint Bernard, and Talloires) filled with cafes, patisseries, restaurants, and hotels.

The section after Talloires, to the southern end of the lake, is one of the quietest and most scenic on the loop, with expansive views across the lake and up to the surrounding mountains.

The bike path on the western side of the lake is the old railroad line. It includes a tunnel through a rocky mountainside, in the town of Duingt, which is my favourite village along the path. It’s a long, narrow town filled with old, stone buildings. There’s a church in the centre, a supermarché and the Boulangerie du Lac, which, in addition to a full line of pastries and baguettes, creates superb sandwiches. Across from the church is a park, right on the water, with great views across the lake. This is the perfect place to enjoy a sandwich from the Boulangerie du Lac.

There are several plages on this side of the lake. About two kilometres past Duingt, I followed the signs to the Saint-Jorioz plage, one of the largest beaches. It seems redundant and unnecessary to write, but: great views!

If you’re up for a Tour de France-style climbing challenge, take on the Forclaz, on the east side of the lake. The 8.4-kilometre climb, which has an average gradient of 7%, begins in Talloires. You start climbing immediately, and with each metre you pedal up, the views below get better and better.

The Col de la Forclaz was first ridden in the Tour de France in 1948, and this climb has been part of six subsequent editions of the world’s most famous bike race. According to the sign at the start, this ascent is renowned for both its difficulty and the superb view of Lake Annecy. Flocks of hang-gliders and paragliders add a certain je ne sais quoi to the climb.

There’s a restaurant/café at the summit of the Forclaz that allows you to appreciate the stunning views of Lake Annecy while getting in some fuel for the descent. While there weren’t exactly flocks of hang-gliders, I did see a few, off in the distance. I was tempted, for perhaps six seconds, to consider a hang-gliding lesson, but quickly came to my senses and decided cycling is the best way for me to take in all these sensational sights.

Lead photo credit : A bit of flat ground before the ascent © Steve Wartenberg