The Lure of La Vendée in Pays de la Loire 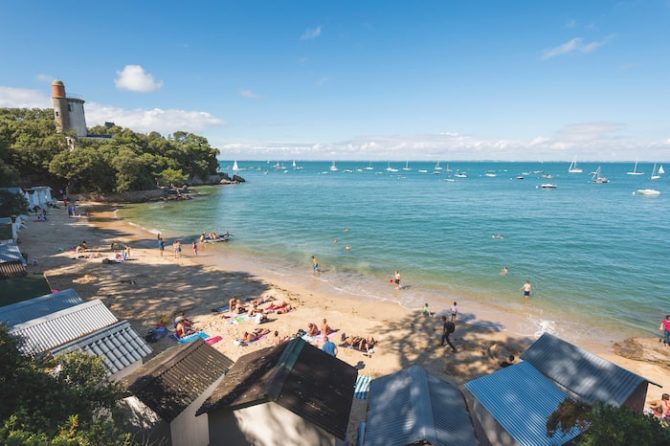 This coastal departément is famous for its sunshine, but there is much more to discover, writes Stephen Davy-Osborne

Beautiful sandy beaches and levels of sunshine more closely associated with France’s Mediterranean seaboard than its western shoreline have put La Vendée firmly on the map as a destination for sun seekers from all over Europe. Yet there is far more to this Atlantic coast département than just an escape to the sun.

The seaside resort and active fishing port of Saint-Gilles-Croix-de-Vie, for example, is not just a town with two thriving industries, but also a town of, effectively, two towns. Saint-Gilles-sur-Vie and Croix-de-Vie were two separate entities on either side of the Vie river until 1967. The two parts of the municipality are linked by a bridge across the estuary, and a shared love of seafood… 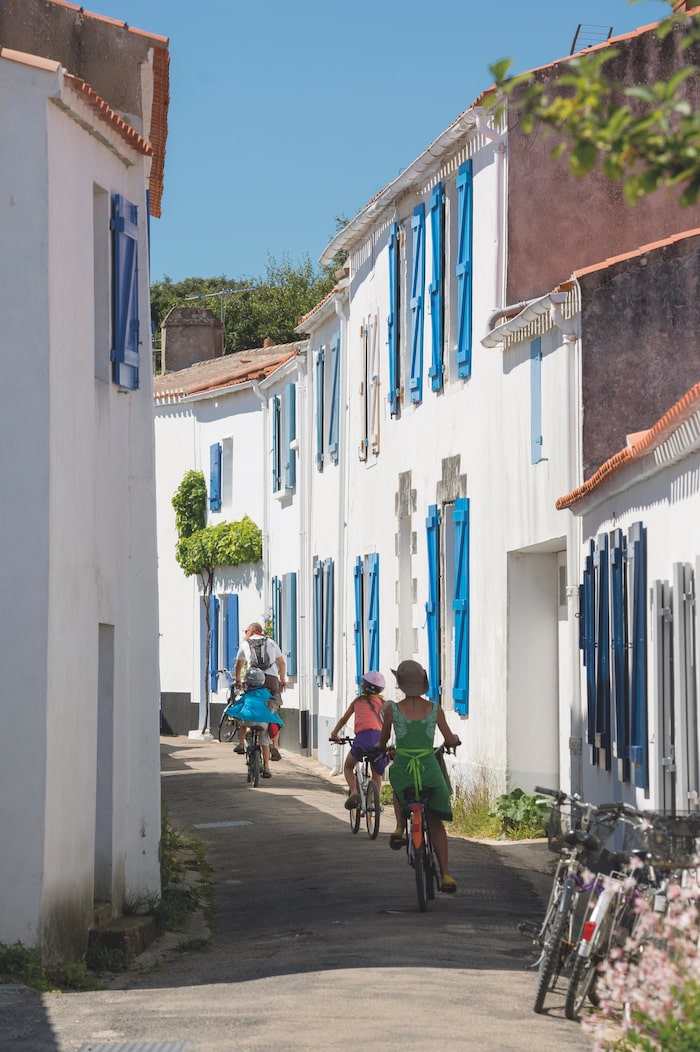 From October to March, a fleet of 42 vessels crewed by 100 fishermen brings home hauls of mackerel and other fish to the town’s thriving port. When restaurants in the town offer the catch of the day, it really doesn’t get fresher than this, as a daily auction on the quayside sees that morning’s catch snapped up there and then by local restaurateurs as well as wholesalers. From April until the end of September, the fishermen focus their attention on the sardine, the first wild fish to be awarded the Label Rouge certification.

This is a fish the town has taken to its heart, with around 3,000 tons of sardines caught during the season, making this one of the most important sardine ports in the country, as four generations of the Gendreau family can attest. Today, La Perle des Dieux is synonymous not only with the delicious sardines they prepare, but also the exquisite cans they are sold in. Each year, or vintage, features a piece of art created especially for the can, making them eye-catching enough to rival the most prestigious wine bottles. 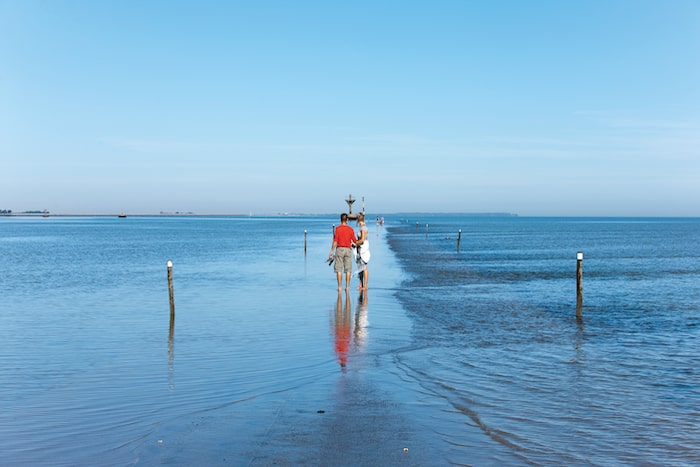 Le Gois Ile de Noirmoutier. Timings of the tide are clearly indicated to ensure you have plenty of time to make it across. Photo credit © Valery Joncheray

These colourful blue fish also lend themselves as tour guides: depictions of sardines are painted on the ground to guide visitors to some of the most notable sights around town as part of Le Chemin de la Sardine. One of the town’s hidden gems on the route is the Maison du Pêcheur museum, where you can take a step back in time and see inside a traditional fisherman’s whitewashed cottage with its striking blue shutters and learn how locals used to live.

The importance of the sea to this resort can be found on almost every street in some shape or form – even in the town’s church, where a special installation above the altar features a ship and full-size net spread out into the cloisters, embodying the importance of the fishing industry to the people of Saint-Gilles. The town’s seafaring heritage also saw the founding of leading yacht and motorboat manufacturer Bénéteau in 1884, with the firm still proudly based in the town, which now plays host to a number of prestigious sailing events throughout the year. 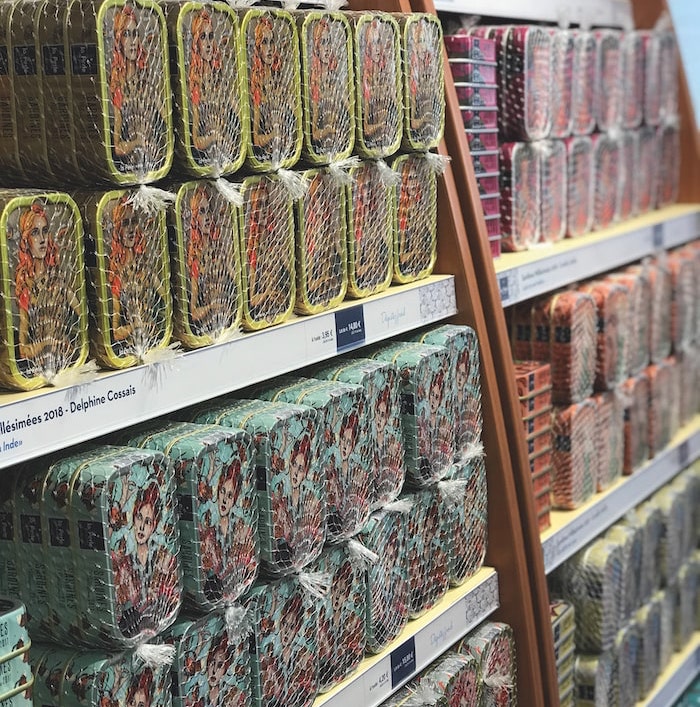 You can get a first-hand experience of life off the coastline by stepping aboard any of a number of fishing vessels that offer day excursions out to the fishing rounds to allow you to catch your own dinner, while the marina is home to a number of sailing schools if stepping aboard a yacht is more your style.

Watersports are also incredibly popular along this stretch of coastline, and even inland. Les balades de Chloé offers those seeking some moderate exercise the chance to be at one with the sea. Aquatic marching along the shoreline gets the adrenaline pumping, while sessions of paddleboard fitness inland on the river combine paddling with core exercises to really test your balance.

The Vendée is not well-known for its wines, but one winegrower is putting his considerable experience into changing that. Vigneron Éric Sage and his wife Petra arrived at the sprawling vineyards overlooking the coastline at Brem-sur-Mer in 2016, and have been working tirelessly ever since then to understand the vines that grow here and create excellent wines at Domaine Éric Sage. Having worked in the wine industry for most of his adult life, as soon as Éric stumbled across the site near the Vendée coastline he knew he had the right combination to create a rather special collection of wines. 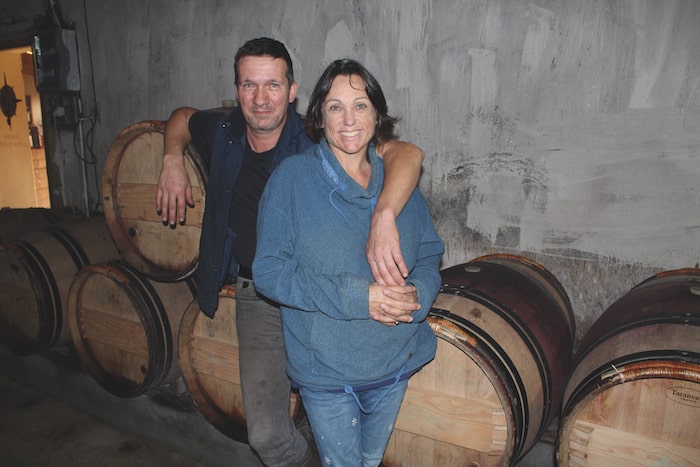 “It was always very important to me to create wines with personality,” explains Eric. “I was looking for a good terroir. It could have been anywhere in France. The appellation was not important to me.”

The couple are trying to work with their 15-hectare vineyard in a responsible way, endeavouring to understand the delicate balance of the ecosystem that allows their vines to thrive here. They are keen to preserve this particular terroir, where the vines are deeply rooted in a rocky terrain of shale, granite and quartz, which brings real character to the wines, and where the vines also benefit from the clean, fresh air swept in from the sea.

Their holistic approach to winemaking has seen them develop a loyal following for their wines. Éric and Petra have defied expectations in their successes, while creating a quality of wine previously unthought of in this part of France.

The couple are always keen to share the story of their journey, and during the summer months offer horse-drawn carriage rides around their picturesque vineyards, with their sea views, courtesy of their magnificent endangered Trait mulassier Poitevin horse Bolero.

Frogs’ legs, eels and caillebotte are just three of the local delicacies in this corner of Vendée that local chefs and food producers are working hard to preserve for generations to come. Working under the banner of La Cuisine Montoise, a number of traditional recipes handed down through the generations have been entrusted to local chefs to ensure these local specialities don’t disappear from the region. 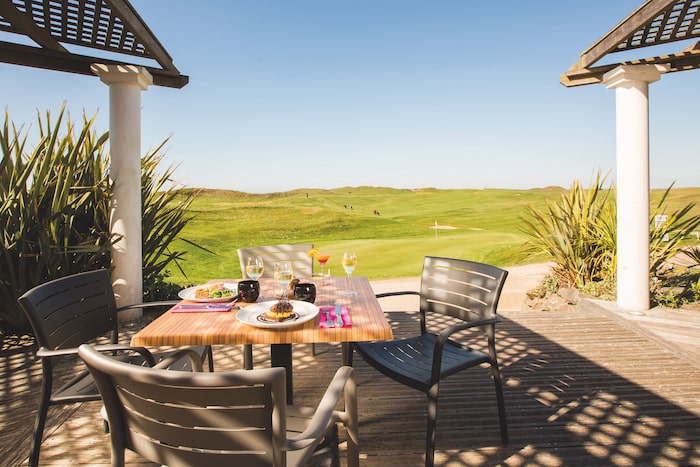 Lunchtime at the golf club.

You can sample some of these fiercely guarded family recipes thanks to the efforts of the tireless chefs in the kitchen of the clubhouse at the Saint-Jean-de-Monts golf club. Here at the club you can enjoy gaufres aux salicornes (samphire waffles), filet de canard (duck breast) and sablés au chocolat (a particular kind of chocolate biscuit) while enjoying the views out over a links golf course that draws in golfers from across the country.

Local recipes are also on the menu at La Quich’notte, a restaurant in a beautiful thatched bourrine dating back to 1903. It has been run by David and Kathleen Rousseau since 2010, and the husband and wife team have built a real name for themselves by offering locally sourced specialities, drawing on the recipes of the people who lived and worked in the marshlands. Expect eels and frogs legs, as well as beef fillet and duck confit and sea bream. 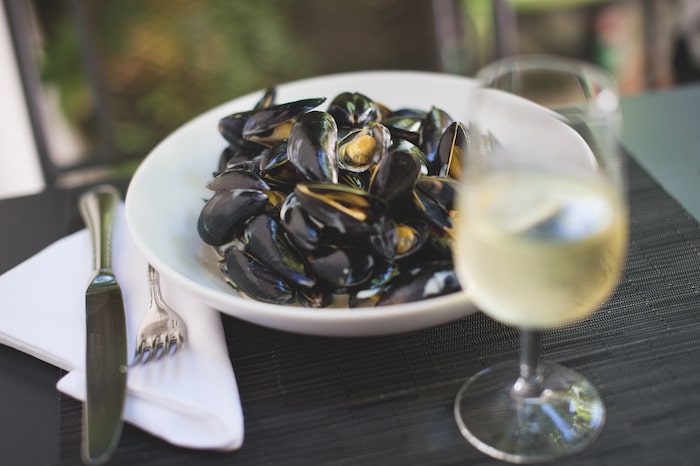 The dunes along the coastline at Saint-Jean-de-Monts support a diverse ecosystem and provide a fascinating environment to explore. Revealing just what the natural world has hidden in plain sight is the pioneering Biotopia at Notre-Dame-de-Monts.

Split between a 250 square metre indoor interactive learning zone and 40 hectares of Vendée coastline, this environmental centre combines virtual reality with the great outdoors to show visitors the vast variety of wildlife that call this habitat their home. Using GPS-enabled iPads, visitors are able to take a tour through the woodland that lines the dunes and learn about local species such as the secretive wild boar that roam among these trees, as well as all the other weird and wonderful creatures that reside on the shoreline. 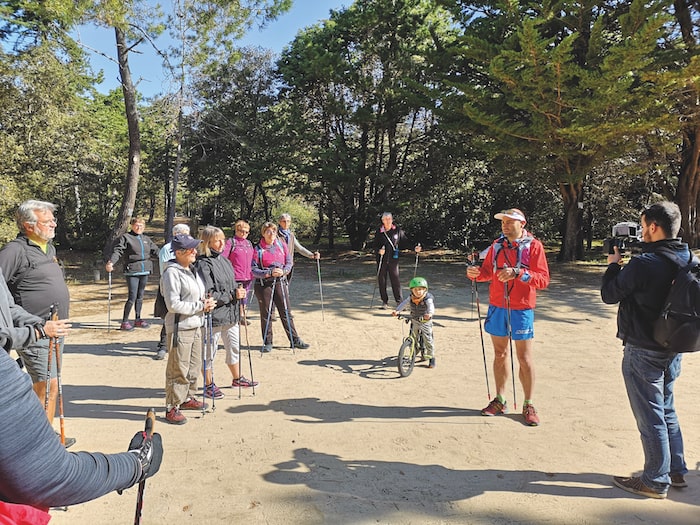 These coastal woodlands are also criss-crossed with a number of popular walking trails and bridle paths, and there are even opportunities to explore at a more regulated pace. Fabienne Poiraud used to play in the woods as a child but now uses them to help people explore the area and improve their own fitness during her weekly Nordic-walking classes. Easier on the muscles than jogging (which is also popular in these woods) it gives the upper body a workout too. And if you want to step out on your own, the woods are the first on the Atlantic coast to make use of the Stations Nordik Walk app, which allows people to explore various trails through the forest at their own pace, using the app’s GPS system to guide them. 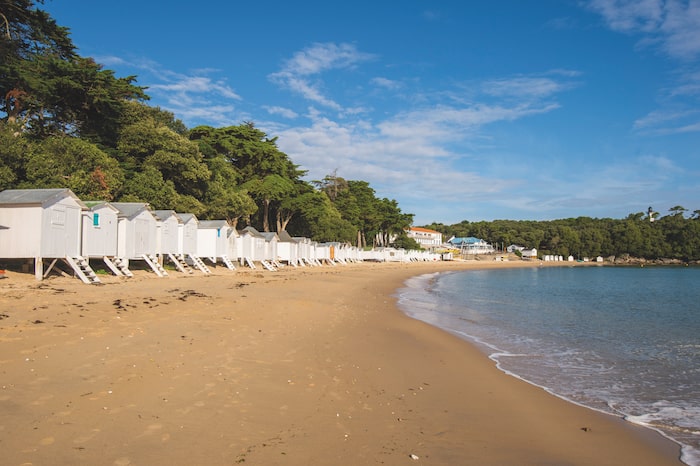 At its narrowest point, the Île de Noirmoutier is just 500 metres from coast to coast. Around a third of the narrow land mass is made up of salt marshes, while extensive oyster and shellfish farms can be seen at low tide along the coastline. This beautiful outcrop into the Atlantic Ocean has built a real name for itself as a foodie destination, while outdoor pursuits are also incredibly popular – there is a cycle route around the island’s entire 84km coastline.

It is often around two degrees warmer on the island than it is on the mainland, and mimosa can be found growing here from the end of January – in fact, it often comes into flower here before it does in Nice. Renoir also famously commented on the quality of the light on the island, likening it to that of the south of France, and it has since drawn many artists looking to capture its beautiful landscapes. 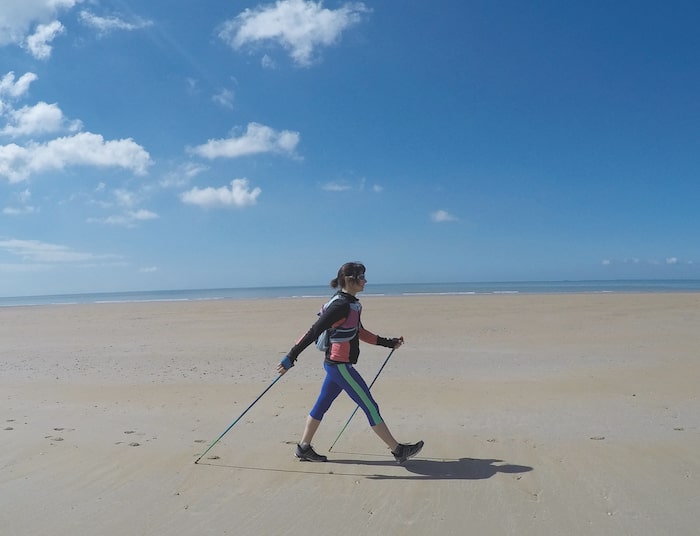 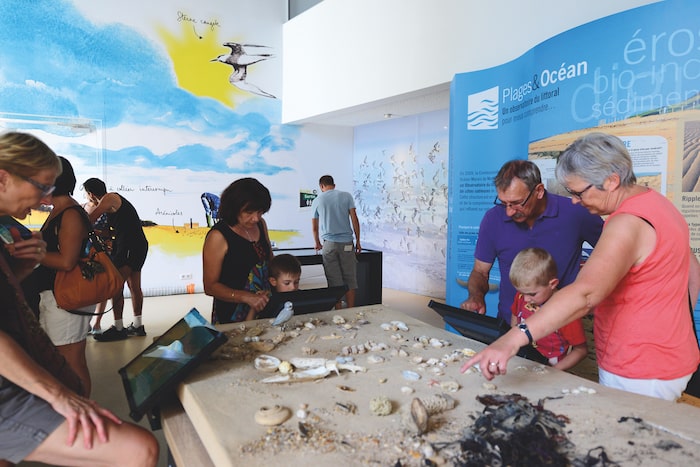 A 12th-century castle overlooks the town of Noirmoutier-en-l’Île, while the recently restored Hôtel Jacobsen now serves as a museum showcasing the importance of the island as a port and the wealth this trading activity generated. Today a lot of the wealth is generated by tourism. The island as a whole has a permanent population of 10,000 people, but it attracts visitors all year round and in high season there can be up to 100,000 people here at any time.

There is a road bridge at the southern extent of the island connecting Noirmoutier to the mainland, but twice a day, when the tide goes out, you can also drive along the passage du Gois from Beauvoir-sur-Mer to the island village of Barbâtre. Timings of the tide are clearly indicated to ensure you make it across with plenty of time to spare. 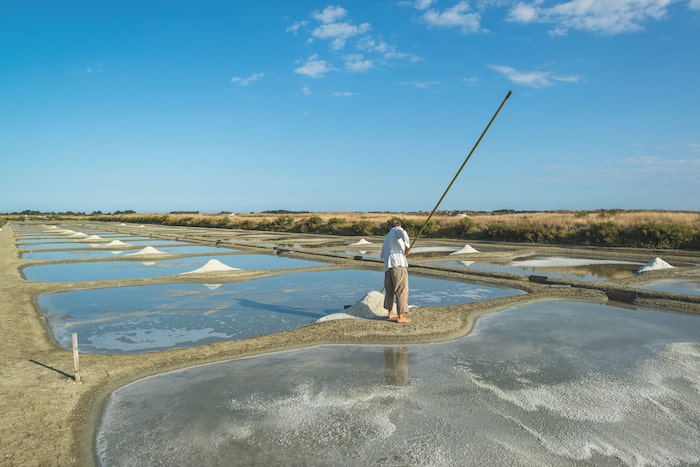 On this route you can catch a glimpse of the oyster farms before the tide comes back in and submerges them. Despite the opening of the road bridge in 1971, the passage du Gois – often referred to as the island’s umbilical cord – remains busy. And every year an international road running race, the Foulées du Gois, is held along its length, with runners racing against the tide to make it across as the water rises steadily above their ankles.

As well as offering outdoor pursuits and some of the finest cuisine in the region, the island also boasts some incredibly beautiful coastline, so don’t feel bad for taking some time out to kick back and relax on one of the many serene, sandy beaches hidden along the island’s many coves. It is all part of the wonderful Vendée experience!

Previous Article Explore Australia’s Great Barrier Reef… in Monaco
Next Article A Taste of France in DC: The Hillwood Estate, Museum and Gardens