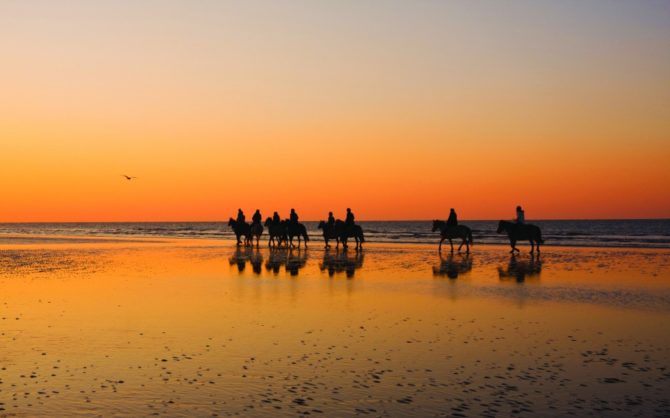 Mark Todd is flying. Astride his very athletic horse, he has just galloped down the hill, leapt a couple of fences and splashed through the water obstacle like it was a mere puddle. Spectators watch open-jawed as they realise they’re in the presence of genius. At this speed, other riders would have found themselves face down in the mud ages ago. Not Todd, though. This sporting legend has won two gold medals and three bronzes at the Olympics.

Right now, though, he’s competing at a far lower level than normal – a cross-country competition in Normandy called Le Grand Complet where riders have to negotiate obstacles such as water, trees, logs, banks and ditches. It’s a test event for this summer’s World Equestrian Games and Todd needs to familiarise himself with the terrain. 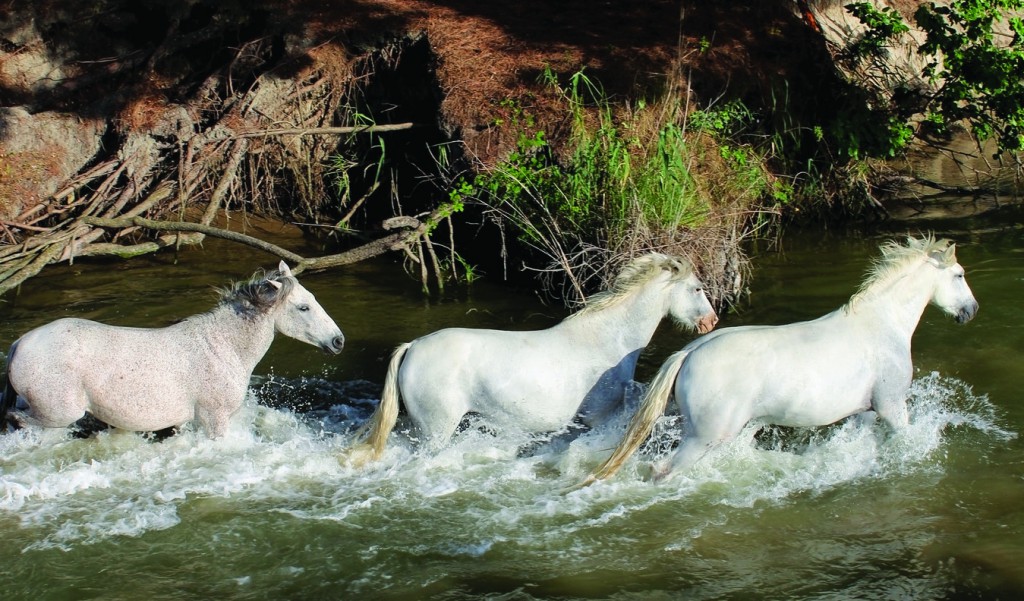 The WEG, as they’re known in the industry, are a big, big deal in equestrian sport. Outside of the Olympics, they’re the blue ribbon championships where all the world’s greatest horses and riders congregate to show off their skills in show jumping, driving, dressage, endurance riding, reining, vaulting, paraequestrianism and (Todd’s speciality) eventing. No need to go into detail about each event but, suffice to say, if it involves the world’s finest horses and most skillful riders, then it’s part of the WEG.

2014 sees the games coming to France (Normandy, to be precise) for the first time ever, which is quite surprising, given the country’s love affair with all things horsey. Wherever you look in France, sooner or later you’ll find evidence of horses and the proud traditions built around them: horse racing in the snooty Paris hippodromes; selective breeding at the stud farms dotted around the country; pony trekking in the Alps and Pyrenees; galloping through the surf on France’s northern coast; hunting wild boar on horseback in Burgundy; the white horses of the Camargue; gambling through the PMU on just about every horse race staged; and, dare we mention it, dining out on the very best horse meat.

France’s agrarian economy has a lot to thank for this love of horses. According to Jacky Lebrun, author of a French government report on the country’s equine industry, there are around a million regular horse-riders in France, 45,000 breeders and just under a million actual horses. Ten per cent of those four-legged creatures live in the region I’ve been invited to: Basse Normandie. And my hosts, it seems, are doing their very best to show me just about every one they can.

My horsey trip starts in Caen where I visit some of the stunning venues for the upcoming World Equestrian Games. I meet a charming chap called Fabien Grobon, the games’ president and CEO. Full of energy, and a self-admitted “complete outsider when it comes to equestrian sport”, he tells me how his job has been something of a baptism of fire so far. Initially, the sport’s insiders weren’t happy about a non-equestrian running their biggest showcase, and they weren’t slow to tell him so. There were logistical nightmares, too: last year, for example, one of the roofs of a WEG venue in Caen collapsed under heavy snowfall and Fabien found himself galloping around trying to locate a temporary home for the reining event.

But Grobon is one of those infectiously optimistic types. I speak to him one year to the day before the opening ceremony of the WEG. “We’re walking now,” he says. “Then we’re going to trot. Finally we’re going to canter.”

Another man readying himself for full canter is Philippe Augier, the mayor of Deauville. I meet him briefly during a tour of his town’s Pôle International du Cheval – a multi-million euro, nine-hectare equestrian sport training centre – where he waxes lyrical about Deauville’s equestrian status. It turns out Deauville airport is one of the very few in Europe equipped to handle multiple equine passengers. And apparently the local beach is one of the only ones in France where you’re legally allowed to ride horses. “Even if the European Union bans horses on the beach, we will still have them on Deauville beach,” he says defiantly. “Everyone in Deauville lives to the rhythm of horses.”

One of the principal towns in the Calvados department, Deauville claims to be the “equestrian capital of mainland France”. A bold claim and one no doubt founded upon its historical status as France’s seaside resort for the upper classes. Deauville, part of what is sometimes called the Parisian Riviera, is France’s equivalent of the Devon town of Salcombe, say: well-heeled, very upmarket and not short of horse-loving folks. In the commune of Deauville there is one horse to every two and a half humans.

I meet plenty more horse lovers during my Normandy trip. Later that day I’m invited to a nearby polo tournament where lots of preppy Frenchmen, Englishmen and, of course, Argentinians throw themselves and their horses around the pitch in pursuit of their little white ball. At half time I’m encouraged to saunter onto the pitch – which by now has been carved up by hooves and mallets – to help with the replacing of divots. 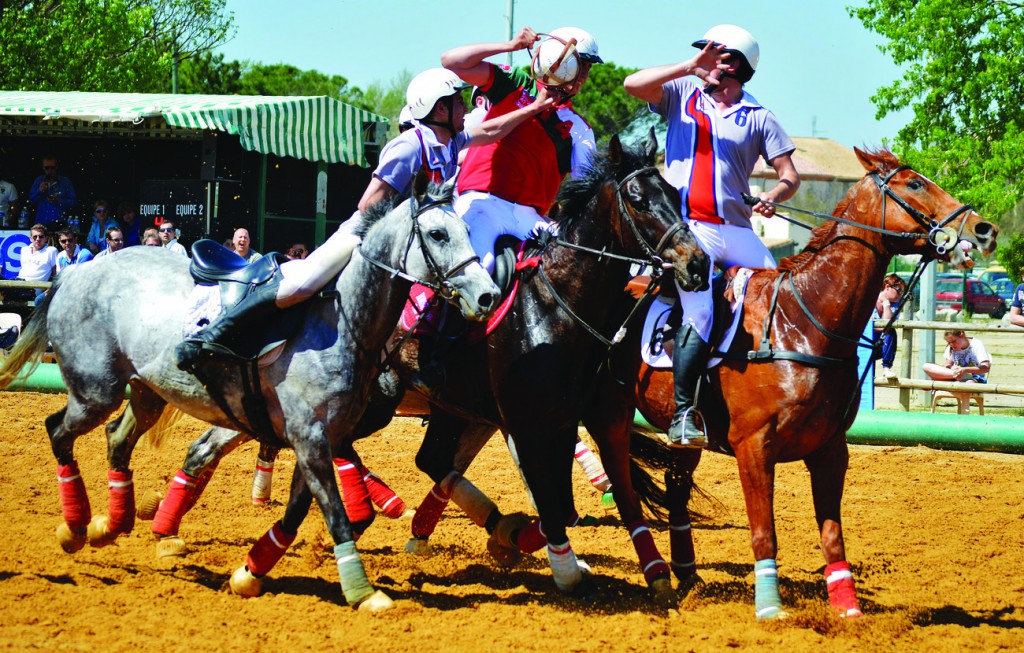 In the second half things get dramatic when one of the French players is thrown from his horse. He lies on the ground for several minutes and has us all worried. A doctor runs over, gives him a quick rub down and, hey presto, like an Italian striker who’s dived in the penalty box, he’s up again, fit as a fiddle.

Polo horses are selectively bred even more assiduously than the upper classes who own and  ride them. But at my next stop, the breeding is more selective still. It’s the Haras National du Pin (the Le Pin National Stud), a stunning 18th Century estate near Argentan where the government encourages the finest breeds of horses to get frisky. This is horse rumpy pumpy at its most elite. We see a whole smorgasbord of different breeds: Arabians, Arabo-Camargues, Anglo-Arabians, Barbs, Spanish-Normans, Percherons, Selle Français, Lipizzaners… I lose count after the first couple of stables.

I obviously can’t complete my horsey tour of Normandy without actually riding a horse. So my last stop is at a village overlooking the Bay of Mont Saint-Michel called Genêts. Here, a group of us head out on a ride along the edge of the bay. On the whole, it’s a gentle excursion, at walking pace, which gives me the chance to admire Mont Saint-Michel itself from a distance. But when we occasionally break into a trot, I use all my powers of concentration to stay in my saddle. Unintentional dismount, and the broken limbs that would surely accompany it, is one part of equestrian culture I’m happy to avoid.

Get Away from It All in Burgundy