Strap On Your Snowshoes 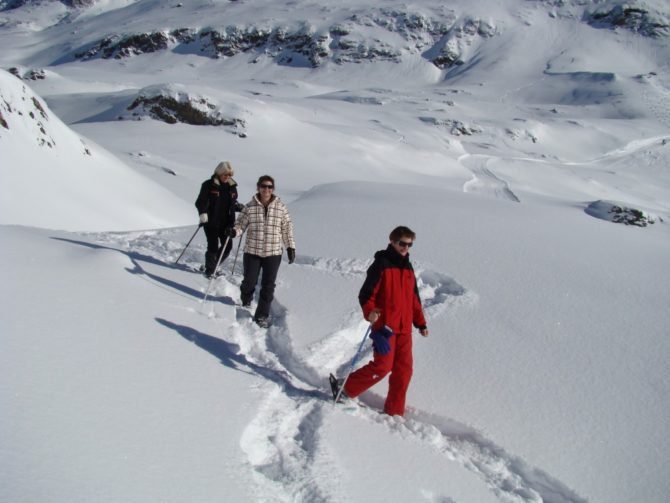 Alpe d’Huez, in the Alpine region known as Oisans, is one of the most important sports sites in France. A favorite stage on the Tour de France, it’s also a paradise for mountain bikers, hosts an annual triathlon every summer and, during the long Alpine winter, it’s one of the country’s premier ski resorts. It also boasts what is reputedly the longest black ski run in the world, the 10-mile Sarenne, and the vertiginous 50-degree run called the Cheminées de Mascle—part of a total of 155 miles of pistes, with 84 lifts and even the option of flying a microlight plane.

Yet even here in ski central, you can strap on a pair of snowshoes and, after a half-hour tramp through the woods, find yourself in perfect peace and tranquility. In front of you lie the tracks, not of skiers or snowboarders, but of wild animals. All around are snow-covered rocks and boulders, pine and fir trees whose branches are laden with glistening snow, and in the distance a breathtaking panorama of snow-frosted peaks.

Snowshoeing dates back thousands of years, although its introduction into ski-resort life is surprisingly recent. Some claim snowshoeing began in central Europe, or possibly Siberia, but the first documented examples come from the native inhabitants of North America. But Nature, as usual, got there first, with the snowshoe hare, an animal with oversized paws to keep it afloat in deep snow. The indigenous Americans developed large, flat wood-and-leather under-shoes that could be lashed on, spreading the body’s weight over such a large area that they could walk on the snow without sinking—vital for getting around and hunting in the winter.

European explorers and settlers adopted and adapted the snowshoes, which eventually developed into the old-fashioned, classic webbed version that resembled a tennis racket—hence the French term raquette à neige.

It was not until the late 1970s that light-weight plastic and aluminum snowshoes were produced commercially and the sport began to be offered in ski resorts in France and around the world. At the time it was not especially popular, probably because it was less glamorous than whizzing downhill on Rossignols. But gradually, design changes made snowshoeing easier and therefore more accessible and fun, and it began to take off. It is estimated that its popularity tripled in the US during the 1990s, possibly spurred on by snowboarders who, banned from most pistes and ski lifts, had to access the slopes somehow. Sport snowshoeing is now thought to be practiced by between two and three million people in France.

Many Alpine resorts now offer snowshoeing expeditions—full-day treks into the backcountry and half-day jaunts, using one of the ski lifts as a starting point. I joined veteran guide Jean-François Capelle—one of the first to offer guided snowshoe tours in the Oisans region—in Alpe d’Huez, on what appeared to be a rather unpromising gray day.

Capelle is everything you would hope for in a mountain guide—knowledgeable, patient and clearly very experienced. And so he should be, since he has been hiking around the Massif des Grandes Rousses and the nearby Parc des Ecrins area for 22 years. Our group of four (the maximum is 12) set off for the Plateau de Rochette, in nearby Auris-en-Oisans.

The snowshoes themselves were light, with bindings at the front and back, a little like the bindings on a snowboard. You need to wear hiking boots or mountain footwear of some type but not, pleaded Capelle, his bête noire: moonboots. It is said that if you can walk, you can snowshoe, and indeed it is easy—although not quite that easy. Since they extend around your shoes by a few inches it takes a few moments to adjust to the size of your newly enlarged feet. We beginners looked rather ungainly for a while, waddling along in Capelle’s wake. But quite soon the strangeness wore off and the waddle began to feel almost natural.

After about 20 yards we stepped off the piste and into a snowy wood. We began walking along small winding paths, among birch trees and pines. Sometimes we left the path, making our own tracks through virgin snow, coming within a few feet of the edges of cliffs—something I would never have dared to do on skis or a snowboard.

Capelle kept his eyes peeled for signs of animals that had also come this way. We saw the distinctive tracks of the mountain hare, a running pattern of four paw prints. Two types of hare live in this area. The white (in the winter, anyway) mountain hare first evolved as an animal of the plains, when the plains were covered with thick ice. As the glaciers receded, so did the animal’s habitat, and the hares eventually became creatures of the high mountains. The European or brown hare lives at slightly lower altitudes but can also sometimes be spotted in the Oisans. Although similar in appearance, the two species are different enough that they cannot interbreed.

A little farther on we stopped on a south-facing slope. The brown buds of flowers poking though the snow reminded us that, come the spring thaw, this will once again be a meadow. Capelle explained that we were in marmot, or groundhog, territory, although there was no chance of seeing one. These animals spend the winter hibernating underground, packed five or six to a burrow. Their body temperature drops to about 46 degrees as they sleep until spring, waking partially only to relieve themselves, which they do in a cleverly designed ensuite burrow.

As we tramped on we saw a flutter of feathers in the bushes—a grouse, said Capelle. Then something brown in the middle of the path. A fox dropping. We stopped for a moment, then stepped respectfully around it.

The weather in the Alps had been bitterly cold for several weeks, so despite the lack of fresh snowfall, frost had built up into long flat crystals on the untouched snow, making the ground glitter and shimmer. As we paused by a small stream, Capelle explained how the increased humidity near the water helped the frost crystals to grow even longer. He had led us onto the western side of the Rochette Plateau. The ski lifts and pistes seemed miles away, the only noise the wind and our snowshoes crunching in the snow. Then the sun pierced through the dark clouds and late afternoon light flooded over us, impelling us to stop to gaze at it all. Below us was the village of Huez. Until the 1920s, before the skiing boom, this was as high up the mountain as people lived. What is now Alpe d’Huez was the alpage d’Huez, the grazing pastures for the community. Farther down was Bourg d’Oisans, and winding up the mountain we could see some of the infamous 21 hairpin turns that stretch between Bourg and the summit of Alpe d’Huez—one of the most grueling of Tour de France challenges and a magnet for keen amateur cyclists the world over.

We turned and began climbing up toward the lift that would take us home. In the sun and at an altitude of 6,100 feet or so, this was good exercise, to say the least. Apparently you burn at least 600 calories an hour snowshoeing. I can well believe it.

Our half-day excursion had given us a taste of the Alpine wilderness. To get the most from snowshoeing here, said Capelle, you need an entire day. Come April, he added, you can drive way up into the mountains and set off from there, miles from anywhere and anyone. The slopes are still snow-covered, and snowshoers can see not just animal tracks but the animals themselves—a snowy safari. I can’t wait.

Originally published in the February 2011 issue of France Today; updated in January 2013