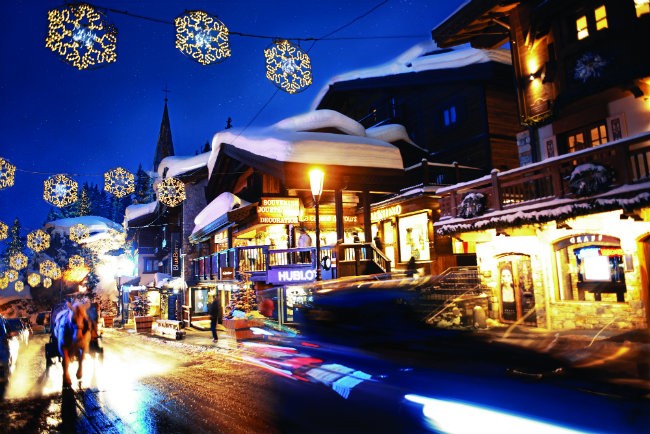 No longer just a playground for moneyed holidaymakers, the Alpine ski resort of Courchevel is returning bigger and better this season, offering top attractions on-and-off the slopes, alongside unrivalled dining and lodging options to suit all tastes and budgets. Blessed with sun-drenched views of the majestic Mont Blanc, crowned by blue skies and surrounded by snowy peaks that extend as far as the eye can see, Courchevel is set in the Tarentaise Valley of the French Alps’ Savoie region, and is the gateway to the Trois Vallées which, with its 370 skiable miles, is the world’s largest ski domain.

From its inauguration in 1946, Courchevel has been a leader in the luxury market and popular with an international clientele, but the French have usually topped the visitor list.

“This season we expect French and British arrivals to be equal, making up about 60 per cent, whereas last year our Russian clientele accounted for 10 per cent of arrivals.”

Courchevel can count wealthy Parisians, Prince William and the Duchess of Cambridge, and Hollywood star George Clooney among its visitors, but between the millennium and the crash of the Rouble in 2014, it was acquiring something of an unwarranted reputation for being the ‘playground’ of an increasing number of Russian oligarchs.

However, the slump in the Russian market may have marked a turning point for France’s most luxurious winter resort which, according to some French skiers we spoke to, regrets being stigmatised by a ‘flashy’ reputation.

“Courchevel needs to go back to its roots so that it can be, like its neighbours, first and foremost a ski destination with, of course, all the art de vivre à la Française that we like so much,” says Yves Mathieu, the director of the Hôtel Manali. “Courchevel will have to work on shedding its reputation as a very high-end resort, which can sometimes be seen as daunting.”

More visitors come to Courchevel to ‘play’ rather than to ski than at any other resort in France, which is understandable. Courchevel boasts no less than 16 five-star hotels, three with the prestigious ‘Distinction Palace’ status; a flurry of restaurants, seven of which are Michelin-starred; and the designer boutiques of brands such as Chanel, Bulgari and Prada.

Consequently, it’s no wonder that Courchevel – which is also referred to as ‘Courche’ among regular visitors– is the undisputed Alpine answer to the French Riviera’s star-studded Saint Tropez. However, the clichés of gaudily bejewelled, fur-clad Russian VIPs – including none other than Mr Vladimir Putin himself – indulging in Courchevel’s off-piste attractions by no means reflects the whole truth about France’s top ski destination.

Four Resorts in One

Courchevel isn’t simply one big enclave of high luxury. In the glitzy shadow of the main resort, there are actually three smaller, less talked about villages which are just as Alpine-pretty but come with the added bonus of being a whole lot more affordable than central Courchevel.

The resort’s four villages, all of which are conveniently connected by a single road, are set at different altitudes. The biggest village, needless to say, is glittering central Courchevel itself, which is located at an altitude of 1,850m. Below central Courchevel lies Moriond at 1,650m, Courchevel Village at 1,550m and Le Praz at 1,330m.

However, regardless of village location, Courchevel is an undisputed haven for beginners and top skiers alike, due to its size, wide variety of facilities and well-connected slopes.

“Courchevel has multiple facets, which makes up its appeal,” confirms Adeline Roux. “Each village will fulfill different expectations for visitors. For instance, holidaymakers can stay in the heart of the action, in central Courchevel, or in the small, traditional and typically Savoyard village of Le Praz, or they can choose the peaceful, natural surroundings of Moriond.”

In addition to hotels, each village has a range of chalets from such operators as the luxurious Courchevel Agence, Le Ski and Scott Dunn. For those on more modest budgets, Ski Esprit and Ski Total offer comfortable chalets, and there are also self-catering options from Ski Collection and Pierre & Vacances.

In terms of skiing opportunities, all four villages are excellent choices, with central Couchevel and Moriond being especially good for beginners, due to their gentle slopes. When you want to take a midi from the slopes, Courchevel has excellent lunch options to suit all tastes. What’s more, most of these can be accessed via ski lift, which is perfect for non-skiers who are looking to sunbathe while taking in those magnificent mountain views.

The largest of the four villages, previously known as Courchevel 1850 due to its elevation, offers everything that Alpine holidaymakers could possibly want. The attractions run from fine dining and an ice rink to top-end spas and some of the finest accommodation that France can offer.

The latter includes Les Airelles, an award-winning, Austro/Hungarian-themed hotel with a ‘Distinction Palace’ designation, which is part of the LOV Hotel Collection. Les Airelles’ excellent, upscale facilities include Michelin-starred dining, and this season saw the hotel launch new jazz and live music evenings, which provide a generous slice of its luxurious guest experience to visitors with more modest budgets.

When it comes to luxury, guests have more than their pick in central Courcheval, but if hotels simply don’t suit, visitors can rent L’Apoka, a super-sized, 4,000-square-metre chalet, which offers guests unrivalled mountain vistas, a 26-metre-lap pool, a cinema and even a golfing range.

More moderately priced is the new Shere Khan Mazot chalet in the Cospillot district, which is just steps from the centre of Courchevel and costs €3,000 per week for six people. A second newcomer, the four-star White 1921 Courchevel, a boutique hotel featuring 25 contemporary rooms designed by Jean-Michel Wilmotte, bears a midrange price tag of €290 per night, including breakfast. And then there’s the eminently affordable, chalet-style Hôtel Tournier, which has rooms at €70 per night.

Stealing the spotlight this season is the charming Savoyard village of Moriond with its brand-new Aquamotion centre. This huge watersports centre opened in December 2015, and boasts indoor and outdoor pools, wild-water rapids, saunas and even a climbing wall and surfing pool, as well as a couple of restaurants.

The village itself is a peaceful haven that’s “more authentic and more focused on skiing,” according to Yves Mathieu, the director of Moriond’s five-star Hôtel Manali. “A lot more affordable, Moriond has retained a mountainside village atmosphere where guests come to ski with their families.”

The accommodation on offer includes the cosy, high-end, family and ski-focused Hôtel Manali with its top-notch spa and restaurant plus a beautiful outdoor terrace that’s bathed in Moriond’s renowned sunshine all day. There are also the four-star Portetta and the three-star La Seizana, which offer great value for money. And this season, Les Chalets de la Mouria opened a brand new, 20-apartment mountain village that’s very affordable, as prices start at €847 per week for four people.

In terms of dining options, the La Casa Italia offers regional dishes and homemade pasta, and boasts a lovely, south-facing terrasse and a wine bar.

At a lower elevation, the rustic village of Le Praz has several excellent, local-style dining options, including the Cave des Lys, which has a traditional, vaulted wine bar. The village’s accommodation options include the three-star, family-run Les Peupliers, which has just undergone a refit. The Chalet Blossom Hill is also a great choice, not least for its indoor/outdoor pool and close proximity to the ski lifts.

There are also plenty of adrenaline-pumping activities for those who prefer to take part rather than watch, such as tobogganing (free for pass holders), paragliding on skis, snowshoe treks to natural sites like La Rosière, hot air balloon rides over the Alps and night-time snowmobiling. In addition, a multi-sport stadium also offers ski-scooting and airboarding. On Wednesday evenings there’s night-skiing with music until 8pm in the Family Park and Millet Ski Touring, which sees a two-mile slope with a 500m vertical drop open to skiers from 6pm between December 16 and March 23. For something a little softer on the knees, cheese and wine tours can also be organised via hotels or the tourist office.

Courchevel’s diverse clientele and wide-ranging facilities are very rare for a ski resort and these are its strengths. And with more affordable accommodation on the rise, new projects like the Aquamotion centre, stronger focuses on winter sports and its more low-key villages, and on developing its uniquely French sense of savoir-faire, Courchevel is decisively on the right track to broadening its appeal and maintaining its position at the top of France’s ski charts.

Getting There: Transfer into Courchevel’s Chambéry aiport by jet or helicopter, or from Geneva airport with a 15-minute car transfer. Eurostar offers direct services from London to Moutiers, which is a 30-minute drive to the main resort. There are also several train services from Paris.

A brand new concept, the €63-million, 15,000-square metre Aquamotion centre opened in December 2015. It’s a hub for water sports, fitness and well-being which works in harmony with its surroundings. “The concept is very avant-garde,” says Courchevel’s Mayor, Philippe Mugnier. “The building is completely integrated in its surroundings and is state of the art when it comes to energy consumption.”

Guests can lunch at a choice of two restaurants operated by Nikki Beach, one of which is accessible via the centre’s pools and the other a separate establishment serving healthy fare that also offers a play area for children.