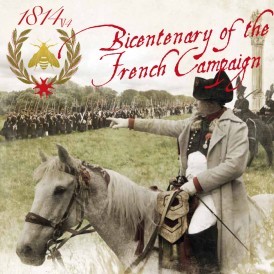 Two hundred years ago, Emperor Napoleon won a short-lived victory over the Prussians and Russians at the Battle of Montmirail-Marchais. To mark the bicentenary of the French Campaign, the town of Montmirail— smack dab in the heart of Champagne country– will be staging a reenactment on Saturday, May 31, 2014 in the exact same place.

This will be the largest such reenactment in France, bringing together more than 1,000 soldiers and 100 cavalrymen. There will be skirmishes, a dinner with the Emperor and his military staff at the chateau of Montmirail (upon reservation), and bivouacs for visitors to discover what soldiers’ daily life was like during the campaign. The actual battle reenactment will conclude with the Awarding of the Legion of Honour by the Emperor, a parade, and a concert.

The reenactment will also commemorate the centenary of the Great War, 100 years after the first fighting of the Battle of the Marne in 1914. Indeed, Marie Louise soldiers will pass the baton to the 1914 pioupiou (WWI soldiers) on Sunday, June 1, as Taxis de la Marne carry soldiers to the field and reconnaissance biplanes aircrafts fly overhead.

The goal of the organisers is “to pay tribute to soldiers’ courage” and to “appreciate the European Reconciliation.” For more information, visit www.1814v4.fr.