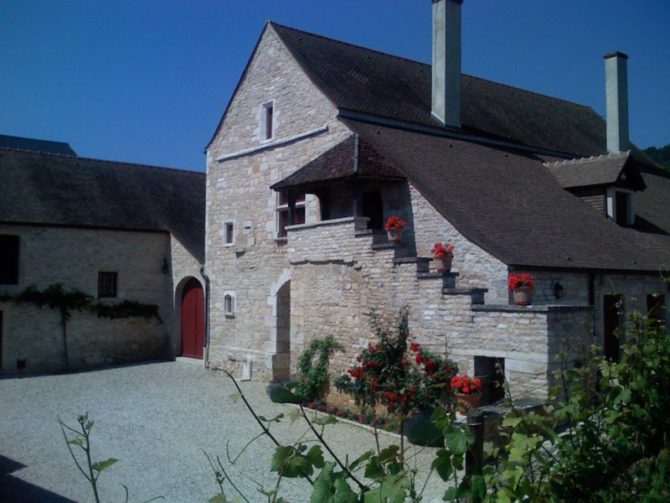 All red Burgundy is made from a single varietal, and wines from the Côte de Nuits, as celebrated wine writer Hugh Johnson notes, “express the inimitable sappy richness of the pinot noir”. Indeed, of the 33 Grand Cru vineyards in Burgundy, 24 come from the 15-mile strip of vineyards of the Côte de Nuits, the northern half of the famed Côte d’Or. Along the N74 highway between Dijon and Aloxe-Corton, the road signs indicate a wine lover’s paradise: Nuits-Saint-Georges, Vosne-Romanée, Clos Vougeot, Echézeaux, Chambolle-Musigny, Morey-Saint-Denis, Gevrey-Chambertin. And if only millionaires can afford Romanée-Conti, La Tâche, Richebourg and Romanée-Saint-Vivant-all of which are either owned or managed partly by the legendary Domaine de la Romanée-Conti-there are also some more down-to-earth but still exquisite Grands and Premiers Crus from the Côte de Nuits that illustrate this small region’s red wine distinction, among them Clos de Tart, Clos des Lambrays, Louis Jadot, Méo-Camuzet and Domaine Dujac.

Red wine reigns in the Côte de Nuits partly because pinot noir favors limestone-dominated soils. The best vineyards lie on middle slopes, where slope wash is concentrated, drainage efficiently decreases excess surface water and sun exposure is optimal. At the Grand Cru vineyard of Clos des Lambrays, for example, the genial resident manager and enologist Thierry Brouin-who used to work for France’s influential vineyard appellation authority INAO-drove me up to the lovely 26.4-acre vineyard in Morey-Saint-Denis, encased by a stone wall and ideally situated on the mid-slope with perfect southeastern exposure to the sun-the kind of positioning that’s essential for red wine grapes this far north.

His Morey-Saint-Denis neighbor Sylvain Pitiot of Clos de Tart points out the three different soil types of his smaller,18.5-acre monopole vineyard-one of the few Grand Cru vineyards of Burgundy under single ownership. He sometimes uses grapes grown in soil with less limestone at the bottom for his Premier Cru, La Forge de Tart. Grapes grown in soil from active limestone in the middle of the vineyard slope, and soil blending clay and limestone resembling silt at the upper end-985 feet high-are used most often for the Grand Cru. Indeed, we could taste the difference from barrel samples of the 2007 vintage, representing the three soil types, with the active limestone, for example, providing fine acidity and a full-bodied and devilishly good cherry aspect, while samples from the upper part brought forth more licorice and mineral flavors. At the end of our tasting he mixed the three samples into one glass to very roughly imitate the final blend. We did not spit but happily swallowed.

The renowned vineyards of Domaine de la Romanée Conti are located in Vosne-Romanée, a little farther south. As geologist James Wilson noted in his book Terroir, Vosne-Romanée is the heart of the Côte de Nuits, with a “blue ribbon recipe” of the right mixture of limestone and marl perfectly situated for the vines. For this reason many tasting experts compare Vosne-Romanée’s Premier Crus-such as Les Suchots, Les Brulées and Les Chaumes-to Grands Crus from other Burgundy appellations. Such comparisons became clear in tasting a 2007 barrel sample of Louis Jadot Vosne-Romanée Les Suchots with winemaking assistant Juliette Lardière: the wine exhibited lovely full body, fine texture and structure as well as velvety richness-a noticeable step up in quality compared to many Beaune reds. Similarly, a group of professional tasters at Méo-Camuzet, another wine producer based in Vosne-Romanée, also noticed the high quality of such 2007 Premier Cru samples as Vosne-Romanée Les Chaumes, Les Brulées and the Cros Parantoux-the last being just above the famous Grand Cru terroir of Richebourg.

In recent tastings 2007 Burgundy reds were less evidently pleasing than their white counterparts, which combined richness with precision and fine acidity. But the 2007 reds perhaps did best in the Côte de Nuits, based on my own tastings from the barrel and on a recent review from highly regarded Burgundy critic Allen Meadows: “This is to say that while the whites are certainly excellent, the reds are decidedly worth your attention, especially from the Côte de Nuits.”

Despite a precocious bud break and a warmer than normal April and May, wet and cool conditions most of the summer put frowns on vintners’ faces, but better weather towards the end of August and throughout September saved the day, and early autumn winds dried out rot that was becoming a problem. Much depended on picking dates and the types of pinot noir used. A vineyard composed of vines with an identical genetic makeup, which yield grapes of similar size and composition, can be described as a clonal vineyard. As time passes and random genetic mutations occur, different vines yield grape clusters of different sizes, ripeness and berry colors, resulting in different grape clones. Varying clones of pinot noir can be matched to specific weather conditions and soils.

Some domains, such as Clos de Tart, employ what is called massale selection, in which the best vines are selected from a standpoint of favorable fruit set, yield and ripening. Buds from many different vines are removed and grafted onto new vines. By definition, massale selected vineyards offer a greater genetic diversity, which can result in more character and complexity, its advocates say.

At Domaine Dujac, which has a lovely location in the heart of Morey-Saint-Denis, co-owner Jeremy Seysses said he may have picked earlier than he would have liked last year (September 1), partly because the domain planted many early-harvesting clones of pinot noir. His father Jacques Seysses bought the property in 1967, and Domaine Dujac has quickly earned a reputation as one of the top producers of the Côtes de Nuits, with Grand Crus such as Clos de la Roche, Charmes-Chambertin and Bonnes-Mares.

Jeremy Seysses seemed a bit reticent about 2007. Barrel samples I tried were fine, if somewhat tight, which is normal with wines this young. But Seysses had no qualms about the 2006 vintage, which was picked under somewhat better conditions, and the proof was at hand. The Grand Cru Domaine Dujac Clos de la Roche 2006, for example, proved silkier and richer than its slightly more austere 2007 counterpart. At Domaine des Lambrays, Brouin uses a variety of different pinot noir clones to better anticipate different harvest times each year. A sample from the 2007 Grand Cru Clos des Lambrays showed pure cherry flavors and good sap on the palate, leaving a very elegant impression. Brouin likes to pick earlier to preserve freshness, while his neighbor Pitiot at Clos de Tart systematically picks later-starting on 7 September-resulting in a more concentrated wine, made from massale selections of pinot noir.

At Méo-Camuzet, in Vosne Romanée, owner Jean-Nicolas Méo described 2007 as “challenging”, but at a professional barrel tasting of his 2007 wines earlier this year the collective conclusion was that he met the challenge well. Founded by Etienne Camuzet at the turn of the last century, the domain was transferred to Jean Méo in 1959, when Camuzet’s daughter died childless. Jean’s son Jean-Nicolas Méo has been running the estate since 1989 and his wines also count among the best in Burgundy today.

All the 2006 bottle samples I tasted seemed slightly richer and more corpulent, if not quite as precise or as elegant, as some of the 2007s. At the end of the tasting at Méo-Camuzet for example, Jean-Nicolas pulled out a mystery bottle that turned out to be a Vosne-Romanée Les Chaumes 2006, a more amplified version of its 2007 counterpart. According to critic Meadows, the best 2007s are every bit as good as the best 2006s, but he finds 2006 to be more consistent across the board of appellations in the Côte de Nuits. As I had heard from several winemakers earlier this year, the 2007 vintage may well be a “mid-range” vintage, one to enjoy over the next 15 years or so, depending on the quality of the appellation. For a really great vintage, one to put away in your cellar, 2005 is the top choice, but be warned: this one set record high prices.

The good news about the 2007 vintage is its charm, even among more humble appellations such as the northern Marsannay appellation in Côte de Nuits. Try a Domaine Huguenot Père et Fils Marsannay. I paid only €15 a bottle, and I find that its cherry infused nose and very thirst-quenching nature accurately reflect what Meadows noted: “Some of the best successes of the vintage are to be found among the regional wines.” Indeed, this domain also produces a white Marsannay-rather rare-which is very precise and refreshing, and not hard on the wallet.

What makes Burgundy so intriguing is that two neighbors like Clos de Tart and Clos des Lambrays, with the same grape and virtually the same soils, can make two very different wines. Certainly common elements command respect for both: low yields derived from harder work in the vineyard (pruning, green harvests), which lead to higher concentration of the juice before fermentation; thickly planted vineyards, which lead to healthy competition among the vines; ideal vineyard positioning and careful selection of grapes-discarding underripe grapes for example. All these and other criteria are fulfilled by both Clos des Lambrays and Clos de Tart. Furthermore, both vineyards are physically beautiful, each with impeccable grounds enclosed by a stone wall. At Clos de Tart, a vineyard dating from 1142, tasters can sample the wine in an elegant tasting room featuring a massive medieval wine press. The Domaine des Lambrays includes a beautiful garden on what could be Premier Cru quality vineyard land, but instead features an ancient tree and romantic pathways.

But the wines from the two estates could not be more different. Clos des Lambrays has been run for the past 28 years by Thierry Brouin, who swears by early picking to retain freshness, and he uses only about 50% of new oak barrels to age the wine before bottling. The resulting wine is rather transparent, elegant and refined.

At Clos de Tart, Pitiot insists on picking grapes when they are almost overripe, a completely opposite view on what makes a Grand Cru Morey-Saint-Denis. Pitiot also uses 100% new oak, to obtain greater richness and, as already noted, his 2007 is more concentrated. Pierre-Antoine Rovani, a former associate of Robert Parker who now works with several Burgundy producers but shares no business affiliation with Clos de Tart, says of Pitiot: “There is no one better in Burgundy right now.”

For the consumer, the choice is a win-win situation. It’s very easy to enjoy both styles.

Originally published in the April 2009 issue of France Today.