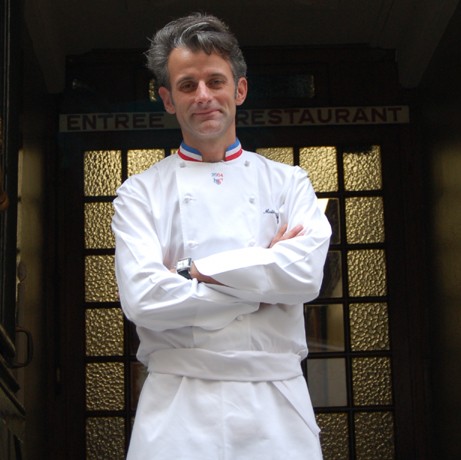 In case you never had the pleasure of dining at her eponymous restaurant, I should explain that “La Mère” Eugénie Brazier was one of the original “mothers”, or female chefs, of Lyon who contributed so much to the city’s pre-World War II gastronomic renown. This mère founded her own little restaurant on the city’s Presqu’île—its central peninsula between the Rhône and Saône rivers—not far from the Opera House, where she wowed the local residents, a prestigious crowd of gastronomes and celebrities, with her silk-stocking take on bouchon cooking. Bouchons, in Lyonnais parlance, are tiny neighborhood bistrots with menus of local soul food, including dishes like chicken in crawfish sauce, saucisson de Lyon, clapotons (sheep’s feet), and tablier de sapeur (breaded, marinated tripe). Brazier was also the first female chef to win three Michelin stars, and after her death in 1977, the renowned restaurant soldiered on, but seemed to lose its bearings when the arrival of la nouvelle cuisine in the 1980s challenged its culinary compass points, butter and cream. Now Matthieu Viannay, one of the best young chefs in Lyon, has taken on the bold challenge of reviving this celebrated institution for the 21st century. Based on a sampling of his first efforts, la Mère herself would be very pleased indeed. Viannay has shrewdly drafted a two-speed menu, mixing traditional dishes in honor of Eugénie Brazier and his own contemporary creations, and the contrast between their styles is elucidating, in a most delicious way. Ultimately, however, it’s probably Viannay’s exquisite renditions of the classics that will be the memory-makers here, including a superb pâté en croûte, quenelles de brochet (pike dumplings), volaille demi-deuil (chicken in “half-mourning”, with black truffle slices) and a delicate chicory-cream tart.

Originally published in the December 2008 issue of France Today