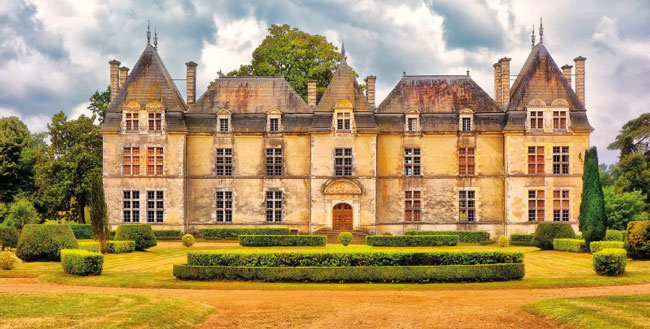 At every turn in Gascony, you will find stunning towns and villages… Here are some of our favourites.  Note: This article is part of a bigger magazine feature called “Two Classic Road Trips Through Historic Gascony.”

A mecca of Romanesque art in France, this UNESCO World Heritage site also has one of the largest concentrations of Art Deco style buildings in southwest France. Admire the spectacular 19th-century Cacor canal bridge, a true work of art.
www.tourisme-occitanie

Auvillar began as a watchtower to keep an eye on the English on the Garonne river. The surviving castle square offers breathtaking views. Don’t miss the Musée du Vieil Auvillar, which is devoted to boat crafts and Faïence earthenware.
les-plus-beaux-villages-de-france.org

Saint-Clar’s Château-Vieux district, Castel Bielh, is the village’s historical core. The streets are narrow, and the houses half-timbered. The church dates from the 12th century. Most of the white garlic in France is grown in the surrounding countryside.
www.tourisme-bastidesdelomagne.fr

The castle of Plieux is a fine example of a Gascon castle, built in 1340 on the site of a Roman camp. The current owner has made it an important centre for contemporary art exhibitions and cultural events.
www.renaud-camus.net/chateau-deplieux

Located 11km from Marciac, this small, once fortified village is worth a detour for its charming main street, succession of pretty colombage (half-timbered) houses, two medieval towers, and 14th-century church of Saint-Jacques-le-Majeur.
tillac.fr

The Château de Termes is one of the most beautiful examples of Gascon military architecture of the 13th century. At the top of its 36m tower, enjoy an exceptional panorama over the Adour valley and the Pyrenees.
www.tourisme-aire-eugenie.fr/tourtermes-armagnac/852

The old capital of the historical Béarn territory, Orthez was founded in the Middle Ages. The keep of the 14th-century Château Moncade rises 110m. On rue de l’Horloge you’ll find the courtyard of the Hôtel de la Lune, a magnificent 15th-century dwelling.
www.coeurdebearn.com

Visit Abbaye Saint-Jean de Sorde, abbot’s residence dating from the 14th century and built on the remains of a Roman villa. Currently being restored, it is open to the public on National Archaeology Days. Tour the thermal baths and ancient mosaics.
www.abbaye-sorde.fr

With Roman roots, Lombez also has links to the Saint-Jacques de Compostelle pilgrimage route. Majan, a bishop from Antioch settled here to Christianise the region and legend has it he defeated a dragon that was terrorising the region.
www.tourisme-occitanie.com

Saint-Sever’s abbey is a UNESCO World Heritage Site and part of the Saint-Jacques de Compostelle route. Discover the Couvent des Jacobins, a monument dating from 1280, housing the museum, and the Sentex house, paved with Roman mosaics.
www.landes-chalosse.com

This coastal river runs through the villages of Léon, Vielle-Saint-Girons, and Moliets. The Courant d’Huchet national nature reserve was created in 1981 over 600 hectares, a site rich in habitats for fauna and flora.
www.reservenaturelle-couranthuchet.org

Located on a natural spur, Fréchou was formed in the 12th century around the parish church of Saint- Christophe and its 13th century castle. There is a Roman bridge just outside the village. Look out for the washhouses and fountains too.
albret-tourisme.com