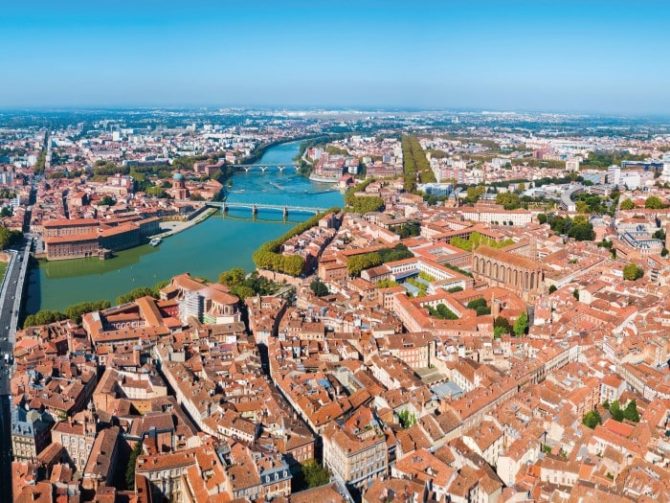 Justin Postlethwaite shows us around his favourite parts of this magnificent and historical city-break destination.

On a nippy autumnal morning, an excitable cocker spaniel is barking (up the wrong tree) at a long-since-scarpered squirrel in Toulouse’s beautiful Jardin Royal, the oldest public park in the so-called Pink City (so named for the orange-pink foraine brickwork which dominates the Haute-Garonne capital’s attractive centre).

The Jardin Royal, which boasts official Jardin remarquable status, has a decidedly English style – although first laid out in orthodox French style in the middle of the 18th century, it was re-landscaped in the 1860s. Post-Revolution, its name lost the ‘royal’ bit for obvious reasons and its title switched between ‘public’ and royal’ over the years, according to political mood. At its centre is an unusual garden feature: a quirky footbridge over a duck pond (les canards even have their own maison), featuring wrought-iron seating on either side for picnickers, or joggers in need of a breather. Nearby is a statue of a true local (albeit adopted) hero – aviation pioneer and author Antoine de Saint-Exupéry, cradling his most celebrated literary creation, Le Petit Prince (more on him later). Lucky are the Toulousains who reside in the buildings that back onto this garden – chic and bourgeois, this is one of the most exclusive parts of town. The Jardin Royal forms a fresh-air double act with the nearby Grand Rond, also splendid for a stroll or picnic (springtime is best for this). Both gardens were central to urbanist Louis de Mondran’s major overhaul of this part of the city in 1751, to include wide, tree-lined allées spoking out from the Grand Rond, which also serves as a roundabout.

The sense of space here on the south side of the city centre is most welcome. Nature lovers should also cross Allées Jules Guesde to enjoy the Jardins des Plantes, a seven-hectare botanical haven which is home to swans, geese, 100 or so plant species and plenty of local flâneurs. On a rainy day or with kids in tow, you may wish to explore the epic, 3,000m2 Natural History Museum (Le Muséum de Toulouse) next door, with its two million-item collection of natural artefacts, plus excellent interactive displays.

From here, I like to head up stylish Rue Théodore Ozenne (locals drop the ‘Théodore’) with its sprinkling of cute teashops, not forgetting to look up at the gorgeous façades of the buildings occupied by lawyers’ offices and the like. To my left is the Carmes quarter, with its 50-stall, covered Marché des Carmes both its beating heart and belly-filling source of local produce. Open every day except Monday, you can drop in here for a tour to please all senses and then snap up superb cheeses, breads and regional culinary specialities. If in the bustling Carmes quarter at lunchtime, you really are spoilt for choice, with countless restaurants lining the market’s exterior. 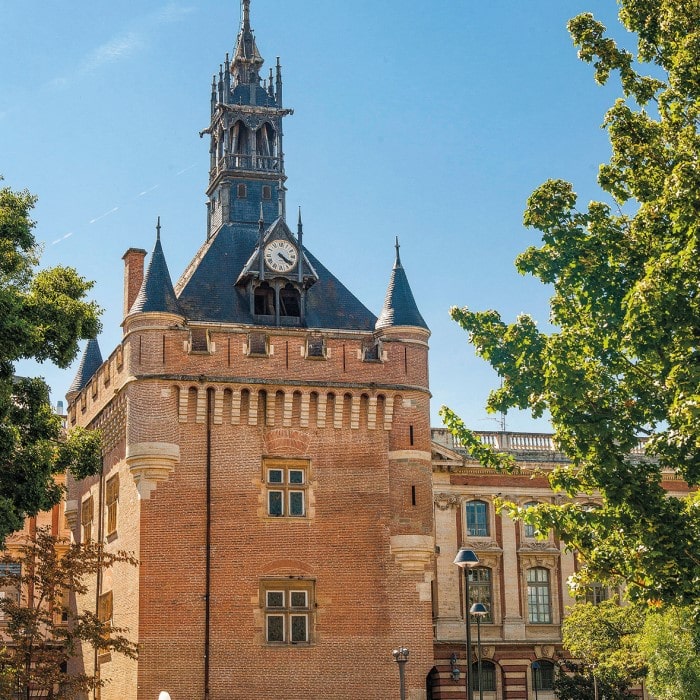 The donjon dates back to 1525 and now houses the city’s tourist office. © Justin Postlethwaite

A SLICE OF CAKE AND CULTURE

Next, a mid-morning snack to die for: I pop into Maison Pillon on the corner of Ozenne and Rue du Languedoc. It’s a Toulouse institution revered by the sweet of tooth, and it’s hard to choose between a pillowy chocolatine (we never call it a pain au chocolat in these parts), a small bag of scrumptious macarons, or some other meticulously presented pâtisserie creation. The chocolatine does the job with a takeaway coffee snaffled from a nearby bar.

Just before Rue du Langudeoc meets Rue de Metz, you can either go straight on, to head further into the city centre, or turn left towards the mighty Garonne river and the Saint-Cyprien quarter. Here, the Hôtel d’Assézat, a Renaissance mansion house built in 1555, is home to the Georges Bemberg Foundation, a quite magnificent collection of paintings and decorative arts from the 16th to 19th centuries. It is currently closed for renovations – as is a large part of the city’s other cultural gem, the Augustins Museum of fine arts, which is located within a 14th-century monastery. The latter’s temporary exhibitions are of the highest quality though – catch the one about Théodule Ribot, which runs until January 10.

Another must-visit, over the 17th-century Pont Neuf (so beautiful, especially at night), is Les Abattoirs, a museum of modern and contemporary art in a converted slaughterhouse. This side of the river also affords the finest views of the city’s skyline.

Next, I take a right onto Rue Croix-Baragnon, thus entering the Saint-Étienne quarter, noted for its mansion houses built for wealthy Renaissance noblesse de robe judicial administrators. With its quaint little streets lined with elegant boutiques, antique shops, art galleries and specialist foodie retailers, this is the place for pootling with your credit card locked and loaded.

The quartier’s architectural showstopper is the Saint-Étienne Cathedral. This imposing, centuries-spanning, multi-style behemoth is unusually higgledy-piggledy, incorporating both Southern and Northern Gothic aesthetics, plus Baroque and Romanesque elements. Back onto Rue de Metz, I make my way to the city’s emblematic central square, Place du Capitole, which has nothing to with ‘capital’ – Les Capitouls were the city’s magistrates from the late Middle Ages. It is dominated by the town hall and opera house, aka the iconic La Capitole building with its emblematic main façade (1750-1760). The interior makes for eye-catching viewing too: head up to the first floor to be wowed by the Salle des Illustres, whose paintings retrace the history of Toulouse. Tucked behind the Capitole is the donjon (dungeon) which houses the city’s tourist office – they will gladly offer a map and plenty of tips for further exploration. 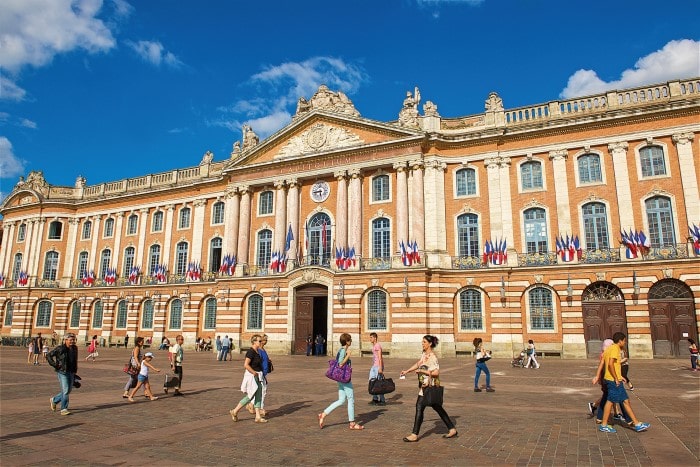 From here, I cross Rue d’Alsace Lorraine, Toulouse’s main big-brand shopping street, towards the circular Place Wilson, veering off left to Toulouse’s other incredibly bustling and nose-twitchingly good covered market, Victor Hugo. As with Carmes, its circumference is lined with superb eateries offering great menus de midi, while inside the food displays will have you salivating.

If shopping for a picnic – or perhaps even something for your suitcase to bring home – my recommendations from the Marché Victor Hugo would be: butchers Maison Garcia for rillettes, hams, saucisson sec, Toulouse sausage and other porky treats (Loïc Garcia and the team also specialise in Spanish meaty treats); cheesemongers Betty and (outside) Xavier, a meilleur ouvrier de France who invented Le Pavé Toulousain, a cubic cheese in honour of the city’s bricks; and Pâtissier B. Authié, who reinvented the Paris-Brest as a Paris-Toulouse, complete with violet Chantilly cream.

Talking of which, Toulouse is proud of its violet products – several shops sell specialities, including La Maison de la Violette, housed on a barge on the Canal du Midi (which crosses the city). It is also proud of its history of creating pastel-dyed fabrics – the city’s Renaissance wealth stemmed from its woad ‘blue gold’.

Leaving Victor Hugo market, a few minutes’ walk northwest sits one more flagship building not to miss. Listed as a World Heritage site by UNESCO, the brick and stone beauty Basilica Saint-Sernin is the largest Romanesque church in France and a key Saint-Jacques de Compostelle stop-off for the Catholic faithful. Don’t miss its Romanesque tympanums and decorated capitals. 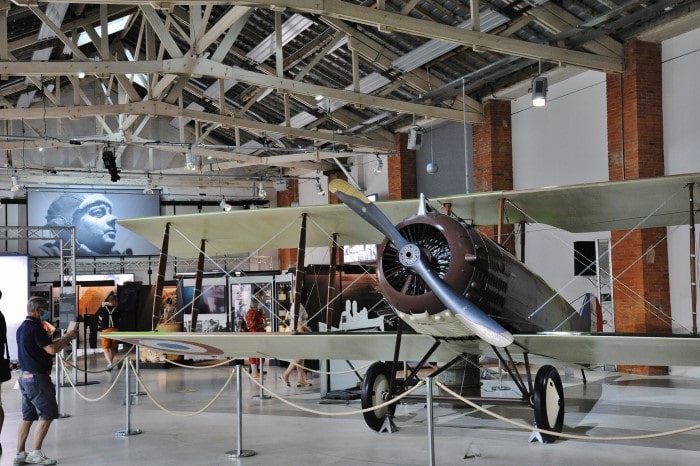 OF PLANES AND RUGBY PLAYERS

Aside from its great food and architecture, for Toulousains perhaps the greatest sources of pride are its rugby team, and the key role Toulouse played in the development of aviation and aeronautics. Les rugbymen are gods here (current French and European champions), and match day at Stade Ernest-Wallon (free shuttle from Métro Barrière de Paris station on match days) is something to behold. The city will be hosting five matches, including one featuring the All Blacks, for the Rugby World Cup in 2023.

As for aviation, the city is the Airbus plane-building hub (factory visits in Blagnac and the Aeroscopia museum nearby) and also home to the space museum Cité de l’Espace (replica spacecraft, much fun for young and old). However, it all began with visionary aircraft maker Pierre-Georges Latécoère, who in 1918 set up the pioneering Aéropostale service to carry mail from France to colonies such as Morocco, Senegal and South America.

Today the firm’s remarkable history, as well as the stories of some of the fearless, adventure-chasing pilots, is brilliantly told at the original factory site at Montaudran (bus line 23 from the city centre, or Lineo 8, stop Piste des Géants). L’Envol des Pionniers provides a brilliant immersion into their world, complete with clear storytelling, artefacts and super (refreshingly non-digital) displays that bring out the adventurer in visitors of all ages. I found it fascinating.

Among the brave Aéropostale pilots were pioneer aviator Jean Mermoz, and aristocratic, Lyon-born Antoine de Saint-Exupéry who, of course, became an acclaimed writer, notably for his 1931 publication of Vol de nuit, about his flying experiences in Argentina, and then for the children’s classic Le Petit Prince in 1943 – which became one of the best-selling and most translated books ever published. His ties to the city explain the Jardin Royal statue – and this great flying man would doubtless have loved the aerial view of the Pink City shared by today’s lucky visitors, as they excitedly swoop in to land for one of France’s best city breaks.

Crammed with history and stunning architecture, you can easily jam-pack your itinerary – but even the flâneurs amongst us won’t want to miss these gems… 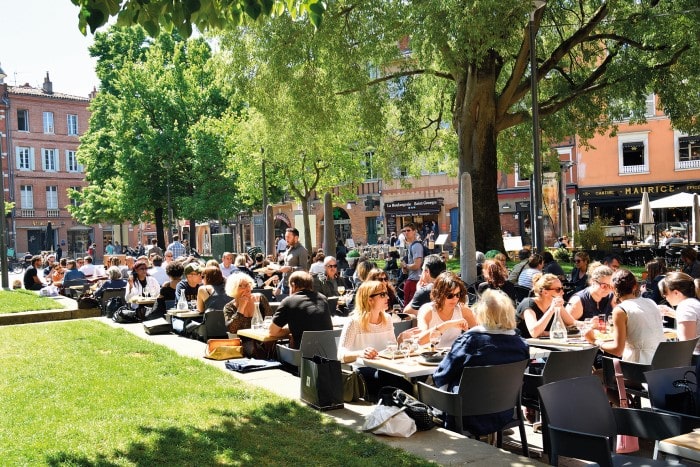 THE PLACE TO BE
Soak up the restaurant terrace vibes en plein air at the vibrant and easy-going Place Saint-Georges, be it for a delicious lunch of hearty local favourite cassoulet at Chez Emile or afternoon chocolat chaud during the cooler months. A true favourite of Toulousains.

THE CAPITOLE IS CALLING
Make a beeline for the expansive La Place du Capitole, the city’s spiritual centre for major events. Explore the Capitole building’s fine interiors then relax with a coffee at historic café Le Bibent. Book ahead for a night at the opera or ballet at the Théâtre du Capitole. 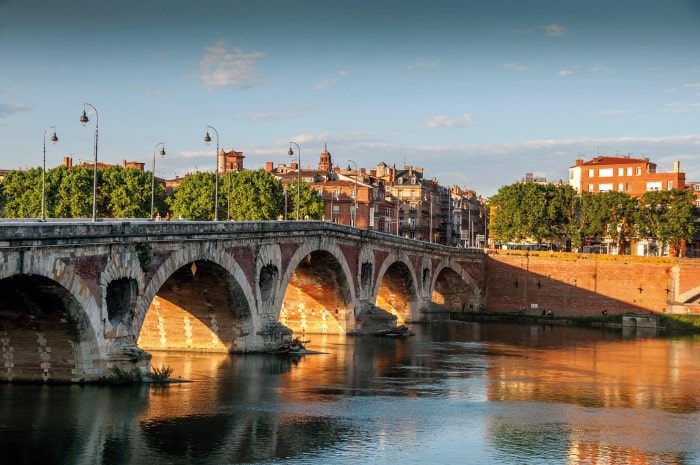 TAKE A RIVERSIDE RAMBLE
For a great view of the rive gauche, stroll along the Garonne from Place Saint-Pierre, passing the Pont Neuf, to Quai de Tounis. In summer, the riverside opposite hosts the Rio Loco music and visual arts festival.

STROLLING SAINT-ÉTIENNE
Adopt the flâneur’s approach to browsing the old streets of the Saint-Étienne quarter, with its host of exquisite boutiques, brocantes and alluring cafés. No hustle and bustle to bother you here, even during the busiest tourist season. Take your time to explore…

JUST JACOBINS
Completed in 1341, the church of the Jacobins is a medieval jewel of Southern Gothic architecture, built by the Dominican order tasked with fighting the tide of Cathar heretics. It houses the tomb of St Thomas Aquinas (who was a member of the Dominican Order) in the shade of a giant palm tree.

More in city, city focus, historical, things to do

Previous Article Did You Know? The Guillotine and Cutting-Edge Technology
Next Article Restaurant Review: Drum Café in Arles