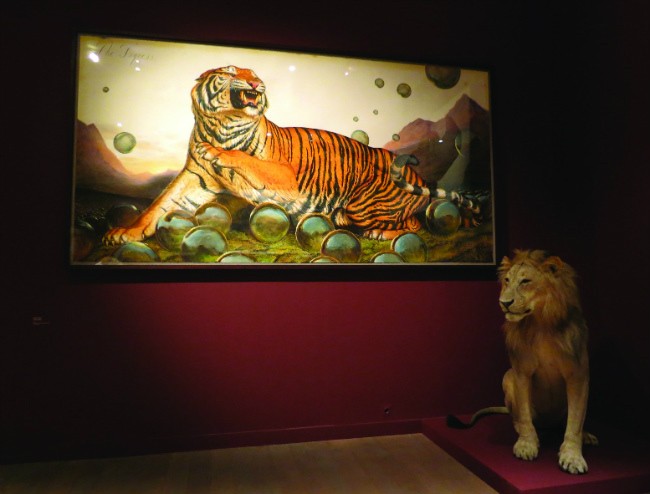 You hear about some exhibitions via conspicuous promotion, but others, such as this one, are discovered through word of mouth. In France, the autumn is the cultural floodgate of the year, and there are so many exhibitions on offer that it’s impossible to see them all. After three discerning sources asked me, “Have you been to the Walton Ford exhibition?”, I knew that I had to see this one…

What first struck me was the disconcerting scale of the New York-born artist’s work, and considering the monumental dimensions of his watercolours, it’s astonishing that he manages to retain the microscopic detail of a naturalist illustrator. However, unlike traditional scenes of animals in their natural habitat, the incongruous vulgarity of human intervention is always present – whether express or implied.

I found The Tigress (2013), which is allegedly owned by Leonardo DiCaprio, particularly staggering. A take on the tale of a 12th-century monk who claimed that you could distract a pouncing tiger with mirrored spheres, Ford’s animal looks hopelessly bewildered – which could be an autobiographical element, as the artist was apparently going through a difficult period in his life when he painted the scene.

There are multiple levels to his works and they contrast, to stirring effect, with the museum’s hunting scenes and taxidermy specimens.

Tip: I would recommend visiting the museum even if you don’t agree with hunting, as the exhibits are, essentially, a meditation on humankind’s relationship with nature.