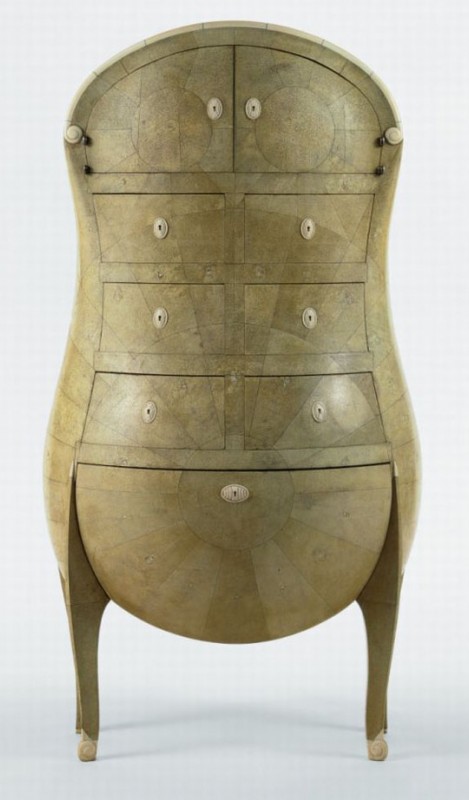 Pritzker Prize-winning French architect Jean Nouvel is again on a roll. His daring designs are often as controversial as they are striking, but two recent commissions have won enthusiastic praise. Invited to design the 10th annual Serpentine Gallery Pavilion, a unique and ephemeral architectural project that sprouts on London’s Hyde Park Lawn as a summer annex to the gallery, Nouvel produced an eye-popping geometric structure in the vivid red of London buses and British telephone booths and mailboxes. (July 5-Oct 20, 2010)

“Rhapsody in Red” and “Scarlet Fever” were some of the punchy headlines that greeted the unveiling of the architect’s rendering. The pavilion’s bold geometric forms include a 40-foot tall wall sloping dramatically above the lawn, with retractable awnings for shade (should the sun appear) or shelter from the more-likely British damp. The cantilevered structure harbors a café and an auditorium as well as outdoor ping-pong tables and French artist Christian Boltanski’s Heartbeat installation, where visitors can record their own hearts. Previous Serpentine pavilions have been designed by Zaha Hadid, Frank Gehry and Rem Koolhaas, among others, and attract some 250,000 visitors-more than the architectural pavilion at the Venice Biennale. Nouvel’s next project is the future Museum of Qatar, a poetic constellation of intersecting disks inspired by a desert rose and a Bedouin caravanserai.

In Bed, With Bubbly

French designer Mathieu Lehanneur specializes in science and ecology. His recent Andrea air purifier filters the air through a system of green vegetation. In Once Upon a Dream, he experiments with a solution for sleeplessness created for Veuve Clicquot’s private Hotel du Marc in Reims, where the Champagne firm cossets VIP guests. The widow Clicquot herself, it turns out, suffered from insomnia.

Lehanneur’s system operates in stages around a futurist alcove bed designed by the Campana brothers. In stage one, the curtains close around the bed, isolating the guest from any outside distraction and “clearing the way to dream”; stage two, the temperature descends to 66F; stage three, when the long, feathery plant suspended from the ceiling is stroked, the light slowly dims to total darkness. In stage four, 15 minutes of white noise induces a good night’s sleep. The process is reversed for wakeup. Inveterate insomniacs can always resort to the bottle of bubbly handy on the bedside table.

The 10th anniversary of the Design Miami/Basel fair lured a bevy of French galleries to the Swiss banking mecca just across the Rhine. The anniversary show was double the size of the December 2009 edition in Miami, up from 15 to 31 international exhibitors who showed in the Messeplatz from June 14-19.

Three Parisians made their first appearances at the fair. Pierre Passebon’s Galerie du Passage showcased marble prototypes of Franco Albini’s Stadera desk; an Op Art style black and white lacquered table and chairs by Gio Ponti; and a rare marble and steel table and chairs by the late sculptor François-Xavier Lalanne, whose work is now in great demand after rocketing to record prices at the extraordinary Christie’s auction of the Yves Saint Laurent-Pierre Bergé collection.

The most surprising new development at the Basel fair was the inclusion of venerable antiques galleries, a move that began in 2009 with Paris’s Galerie Perrin. Paris gallery Didier Aaron picked up the contemporary challenge this year with a new concept. Their minimalist stand featured 18th-century precursors such as famed cabinetmaker Jean-François Oeben’s 1760 violin-shaped secretary, shown beside photographs of its modern descendants, André Groult’s 1925 Art Deco sharkskin-covered chiffonier and Marc Newson’s 1987 Pod of Drawers. Similarly, a set of Directoire olive wood curule armchairs, inspired by the curved stools of ancient Roman magistrates, preceded Michael Thonet’s curvy mid-19th century bentwood chairs and even Mies van der Rohe’s curved chairs of the 1930s and 40s.

American philanthropists have given generously to the care and restoration of the Château de Versailles for almost a century, since John D. Rockefeller, Jr. kicked off the tradition in 1924 with a gift of one million dollars. In June the American Friends of Versailles hosted a glamorous Grand Bal des Topiaires in the Versailles Orangerie to benefit the restoration of the Pavillon Frais, an exquisite open-air structure designed for Louis XV by royal architect Ange-Jacques Gabriel, who also produced the Versailles opera and the Petit Trianon (as well as Paris’s Place de la Concorde). Now a barren shell, the Pavillon overlooks the Jardin Français and served as a spring and summer dining venue for king and court. With intricate trelliswork and pillars adorned by topiary spheres, the Pavillon had oak paneled interiors, mirrors, a fireplace and a Savonnerie carpet—all in need of restoration.

The June 25 ball was the high point of a festive week that included a reception in the Elysée Palace; luncheons and dinners in private homes; a Chopin concert at the Polish Embassy; a dinner cruise on the Seine; and a Champagne reception at the Bosquet des Trois Fontaines, a garden clearing designed by André Le Nôtre and Louis XIV—the American Friends of Versailles’ initial restoration project, reopened in 2004.

Originally published in the June 2010 issue of France Today