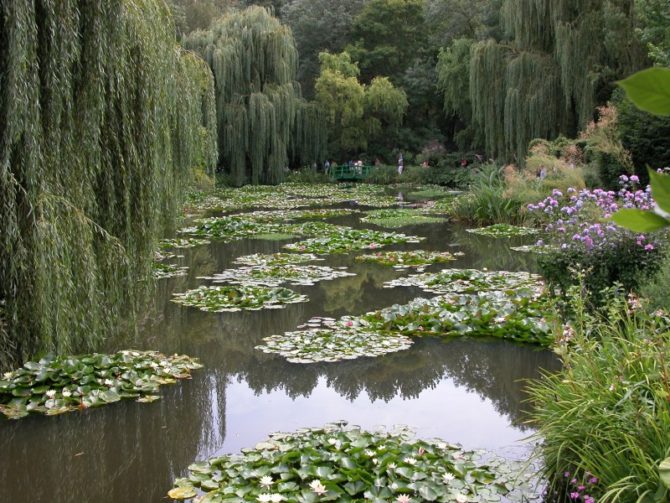 When Claude Monet lived in his Normandy farmhouse in Giverny, his personal contemporary art collection—which included Renoirs, Manets and a dozen Cézannes—was arranged on the walls of his bedroom upstairs, and his colorful Japanese woodblock prints hung in rooms throughout the house. For the painter, the views of his adored garden from both salon and bedroom rivaled the masterworks inside. For the visitor today, they still do.

Dazzling drifts of color greet the eye in the flower garden, which Monet called Le Clos Normand. Depending on the season, the kaleidoscope of hundreds of hues includes pansies and crocus, violets and forget-me-nots, daisies and anemones, tulips, poppies and peonies, chrysanthemums, spears of foxglove and snapdragons, towering gladioli and hollyhocks. Both simple country posies and rare exotic blooms color the garden in pre-ordained harmonies.

In spring, decorative Japanese cherry, apple and apricot trees are thick with blossoms. In summer, nasturtiums run riot across the path of the central allée in all their gold and vermillion glory, roses clamber across arches or—like Monet’s favorite climber, the yellow Mermaid—race up the walls to his bedroom window and perfume the air with their heady fragrance. In autumn, foliage flames scarlet while red and orange dahlias, violet asters, and saucer-sized sunflowers take center stage.

At the southwest corner, a tunnel under a road leads from the Clos Normand to the Water Lily Garden. Winding paths curl around the serpentine curves of two ponds, past bamboo thickets and under weeping willows. The banks are planted with rhododendrons and azaleas, climbing roses and tree peonies. In autumn, the shrubs and ponds glow golden in the haze of the setting sun. In the spring, the green wooden Japanese bridge, familiar from so many Monet paintings, peeps out from a cloud of white and mauve wisteria. But here the real stars blossom in summer—masses of water lilies bathed in a mystical aquatic light.

In every season, the poetic atmosphere envelops and enchants the visitor. “It is a mythical place,” says Hughes Gall, head of the Fondation Claude Monet Giverny. The forthright and charming Gall, the highly acclaimed director of the Paris National Opera from 1995 to 2004, took over the Monet Foundation in March 2008 and has already struck up a new collaborative relationship with a Giverny neighbor, the American Terra Foundation’s former Museum of American Art.

Although the low-lying modern building itself is still Terra-owned, it now houses the new Musée des Impressionnismes Giverny, which was created by a partnership between the Eure regional council, which is financing its €2 million budget, and Paris’s Musée d’Orsay, which organizes the museum’s temporary exhibitions—there will be no permanent collection. The museum opened on May 1, 2009, and its first exhibit was about its neighbor: Le Jardin de Monet à Giverny: L’Invention d’un Paysage.

The story of why and how Monet planned and planted the garden as he did is as intriguing as its result. Monet’s passion for gardening almost equaled his devotion to art, but it was only when he arrived in Giverny in 1883 that he had both the financial means and sufficient land (nearly 2.5 acres) to indulge his enthusiasm. He deemed himself “dazzled and delighted” at the prospect.

As avant-garde a gardener as he was an artist, Monet designed his garden with the vignettes of flowers, trees and water that he wanted to paint. “Traditionally, a landscape artist goes into the country, finds a scene and then paints it,” explains Marina Ferretti, the museum’s curator, “even if he rearranges and re-composes it for his painting. I don’t think there is another example in art history of a painter who created a natural landscape that he later painted. Curiously, Monet was the father of Impressionism, of the spontaneous study of nature as it is. But here, he composed his picture directly with the nature he loved.”

When the artist set about redesigning the property—an abandoned cider farm—he kept the central allée that bisected a garden that was mainly an apple orchard. But he progressively ripped out the box hedge and knocked down the dark spruces and cypress trees that would overshadow the beloved flowers he wanted to plant and paint.

Painting was put on hold while he dug, seeded, weeded and hoed, doing a lot of the work himself—at Giverny he rose at dawn and usually was in bed no later than 9 pm. His eight children—his two sons by his first wife Camille and his second wife Alice’s four daughters and two sons from a previous marriage—were in charge of the evening watering. Friends like actor Sacha Guitry, French statesman Georges Clemenceau and his fellow artists Rodin and Bonnard came for lunch and a walk in the garden. Gustave Caillebotte, also both gardener and painter, crossed the Seine by boat from his home in Petit-Gennevilliers to exchange horticultural tips and cuttings.

“Monet was his own head gardener,” Gall declares. “He was obsessed by the beauty of flowers and the composition of his garden, he was an inventor and a researcher. He had a library of horticultural books, periodicals and plant dictionaries in French, English and German, so he could keep permanently informed of new plants that could represent a color or an atmosphere. He planned the garden like motifs for his pictures and his paintings became the inspiration to continue the garden.”

The carefully tended planting of Le Clos Normand, however, did not immediately translate onto canvas. “The process was long and complicated,” says Ferretti. “It took almost 20 years, buying extra land and getting authorizations to dig and expand his pond and to build the Japanese bridge. And the plants had to grow. It was only when everything was in place that Monet started to paint his garden.”

The only known early painting of the garden, Jardin à Giverny (Dans le Jardin de Monet), dated 1887-91, is not by Monet but by American artist John Leslie Breck, who was part of the American colony in Giverny.

While his garden grew, Monet traveled and painted elsewhere. Farther-flung travels often provided inspiration for his planting. In 1886, he complained that his palette paints could not capture the stunning hues of the red and yellow blooms in the Dutch tulip fields; back home, he recreated concentrated blocks of colors in 38 “paint-box” flower beds. The orange, lemon and palm trees in the Italian coastal town of Bordighera not only spurred his magnificent 1884 Sous les Citronniers (Bordighera), but also the idea of the astonishing profusion that characterizes the garden.

Monet’s own first Impressionist painting of the ensemble of the garden, in 1895, features a young woman. A modernist study of peonies followed in 1896. “He was very proud of his Japanese peonies,” says Ferretti.

The approaching turn of the century marked major changes in both Monet’s garden and his art. Armed with resources from American collectors who were avidly buying his works (the reason why there are so many Monets in the US today, says Gall), he bought a strip of marshy prairie south of his land so he could create a pond. This involved diverting the Ru, a branch of the River Epte, into a design of curves and circles that contrasted with the rectangular beds and straight paths of the first garden. To link the two, he planted an already mature copper beech in a direct perspective of the first garden’s Grande Allée.

When Monet discovered the water lily, it too became an obsession. “He bought and acclimatized all sorts of exotic varieties with extraordinary colors that needed more heat than they could get from the Normandy sun,” Gall recounts. “By building a wall, he created a smaller pond—the water was only about a meter deep—and tried heating it with pipes from a system installed behind the trees. But he finally had to abandon the effort.”

Monet began to paint a series of the Japanese bridge, “the celebrated paintings from the Musée d’Orsay,” Ferretti explains, “with a complete view of water, bridge and the surrounding vegetation. Very quickly, he concentrated more and more on the reflection on the water’s surface, a mélange of light, greenery, water and sky. This universe was less easily identifiable, more fluid.” He changed the simpler, smaller formats and small rapid brushstrokes of the Impressionist period to vast, long canvases that grew bigger and bigger and were painted with generous, sweeping gestures.

“From there, he took off on the adventure of the water lilies painted for the Orangerie museum in Paris, a new and astonishingly modern artistic track,” Ferretti confirms. “His painting becomes unfocused, complex and it no longer has perspectives. It is very far from traditional Western painting. Little by little we are submerged in a universe of paint. It’s at the limit of abstraction. Many abstract artists claim his influence.”

And yet, she points out, “He was a man of the 19th century, a realist painter, he couldn’t do that alone. He needed to create that water lily pond before he launched into the immersion in blue and green.”

After Monet’s death in 1926, the garden slowly disintegrated. His surviving son, Michel, who died in 1966, left both the property and the art collection to the Académie des Beaux-Arts. The collection went to the Musée Marmottan in Paris and a first curator attempted to save what remained of the house and garden.

Giverny’s renaissance began with the arrival of former Versailles chief curator Gerald Van der Kemp and his American wife Florence, in 1976. Having raised substantial sums for the restoration of Versailles, they turned their attention to Monet’s heritage, and the house and garden were saved by millions of dollars from generous American donors.

“Gerald Van der Kemp was a painter himself and an art historian,” says Gall. “He brought in head gardener Gilbert Vahé and they researched the archives, documents, photos and letters as well as the records of seed merchants.”

Monet’s own lists of flowers and plans of the garden were shared by architect and painter Jean-Marie Toulgouat, whose mother Alice Butler was the daughter of Monet’s stepdaughter, Suzanne Hoschedé, and American artist Theodore Butler.

“The statues were crumbling; we started from zero,” says Vahé, “but the design was still there. We used an aerial view of the garden in the 1960s to retrace it.” The ground was plowed up and the garden laid out once more.

Monet’s own plantings varied constantly, and today, too, the garden is in permanent evolution, always respecting the artist’s color choices and basic volumes. The natural look he favored is recreated by allowing some self-seeding plants to grow spontaneously. Beds of yellow and white flowers still brighten shady spots, part of the constant play of light and shadow.

“Every day, there is a problem and a solution,” Vahé says. To combat an invasion of nutria, South American water rats raised for their fur, “who eat everything,” Vahé lined the pond banks with metal panels dug deep into the water. A stand of a thousand poplars planted 30 years ago on land just south of the water garden now casts so much shadow on the ponds that “it cools the atmosphere and the lilies die,” says Gall. Solving the problem is one of his priorities and he hopes the new entente with the Terra Foundation, which owns the land, will lead to cutting down the now unhealthy trees.

Gall has fostered a closer relationship between the Monet foundation and the Musée des Impressionnismes, including a joint entrance ticket. He has also overseen the opening of the house and gardens seven days a week, a new micro-irrigation system, a brilliant new website and a plan to facilitate ticket sales to avoid the mile-long lines on busy days—the house and garden get some 400,000 visitors during the seven months a year they are open. “We’re conscious,” says Gall, “that we are the guardians of a masterpiece.”