Endives: Raised in the Shadows 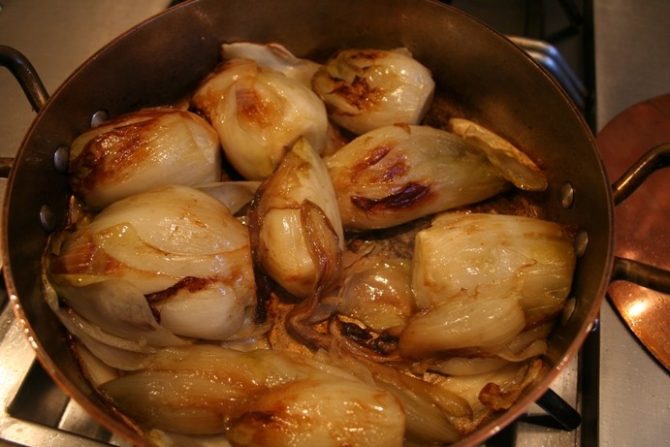 I am awash in Belgian endives. You know the vegetable—they  look like small, ivory-colored torpedos tastefully tipped in either pale yellow or crimson red. They come from the north, and they are winter’s and early spring’s answer to the quest for freshness.

While the endive was mentioned in a historical text as early as the 16th century, there is no certainty it was the vegetable we know today. For one thing, the cichorium, or chicory family, is large and includes curly endive, radicchio, sugarloaf, red chicory and a host of other salad plants.

The endive we know and love (Cichorium intybus) was the result of a lucky accident. As the story goes, a Belgian peasant had tossed away some chicory roots in a barn. He chanced upon them one day and found that, ignored in the dark, they’d grown a pale ivory “flower”, which he tasted and found delicious. He took what he had to market, and from that chance encounter was born the love story between the northern consumer and the endive.

Farm wives took up the baton and cultivated endives for their families, in soil-filled buckets under the kitchen table, hidden from the light. Commercial production began in the 1930s. Farmers in Belgium were the instigators of the endive industry, which is why endives are often identified as Belgian in English speaking countries, but in fact France now produces about half of the world’s 450,000 tons of this juicy vegetable.

How did the endive get from under the farm table to the field? It took enormous industry and imagination, for the endive thrives in warm soil and cool temperatures. To create an industrial production, heating pipes were laid under vast, flat fields in chilly northern France. I remember standing in one of those fields on a bleak, midwinter day when only chunky soil was obvious, thinking of the network of warmth underneath my feet. What an idea, to actually heat soil.

But it works. Endives grown in the soil in northern France, often sold under the label Perle du Nord, are considered the world’s finest, sought after for their firm juiciness and sweet flavor. Their crunch is edged with a slight bitterness that adds depth and interest to this unusual vegetable.

Endive cultivation begins this month or next, while we gastronomes are still enjoying the vegetable’s crunch. Fields are cultivated carefully so as not to disturb the pipes underground. Seeds are sown, and in October leafy green plants are harvested, roots and all. The leaves are cut off
right at the crown of the root and used to feed animals. The roots are the jewel of the endive; they will give birth to the pearly white vegetable we know.

Called “carottes”, the roots are planted in rows and covered with long, low corrugated metal tunnels. The tunnels are each covered with a tarp, straw, then another tarp, to provide insulation. This stage is called forçage, when the roots are forced to produce the endive.

If it’s a very cold season, the endive will grow in four long weeks, or about 30 days. In a normal wet year, they take four short weeks, or about 25 days. During that time, the nascent endives require coddling. The temperature of the tunnels and the temperature and humidity of the soil are checked often, surreptitiously, so as not to let in any light. Light causes the endives to turn green, and a green endive is reprehensible and bitter.

Once the endives are ready the tunnels are dismantled and the endives excavated. Assembly lines of workers trim the endive from the root and peel away the outer leaves. Each endive, referred to as a chicon, is calibrated, then carefully packed in crates lined with light-reflective purple paper.

A totally different method of endive production has also developed, first in the north and now throughout the world, far from the warmed soil and cozy tunnels. Hydroponic endive production was introduced in 1975 with an endive variety called “Zoom”, enabling production anywhere,
since it’s not dependent on climactic conditions. Needless to say, this event had traditional endive growers scratching their heads, as they saw quantities of endives available, for lower prices. The endives are grown in stacked racks; a hydroponic producer can raise ten times the amount raised by a traditional producer, with less work and at far less cost.

While hydroponics does nothing more than chemically reconstitute the soil, the endive it produces differs greatly from the endive de terre. It has its fans because its price is low, the quantity almost unlimited, and it is available throughout the year. But while it is fatter, that girth is chemically infused water, resulting in a vegetable that is less firm than an endive grown in soil. Its flavor also lacks depth and complexity.

Farmers who produce the endive in soil reacted to the hydroponic onslaught by creating the Perle du Nord brand. They guarantee their endives are produced without the use of chemicals, and that they are carefully husbanded from earthy start to finish. Perle du Nord has been successful, and the brand now includes a handful of other quality vegetables, including cauliflower and lettuces.

So why am I awash in endive? Because I’m lucky enough to have several producers of endive de terre right in my neighborhood, and it’s been a good endive year. While these don’t benefit from the label Perle du Nord, they don’t really need it. They’re sold directly at the farmers’ market, by the people who raise and harvest them. Lines form as soon as they’re available—this year it wasn’t until mid-December, but we’ll be able to enjoy them through April.

Good year or bad, I’m a big endive consumer. I use the leaves for dipping. I slice the little torpedo in rounds and combine it with Roquefort and walnuts, then dress it with walnut oil and lemon juice for a gorgeous salad. I slice it in half and braise it with winter herbs. I add it to soups, and occasionally I nibble on it all by itself. Few fresh vegetables offer such crunch, such juiciness and such versatility during this late winter season.

Nadine is a friend from northern France. This is her specialty.

1. Place endives (whole) in a large, heavy ovenproof saucepan. They should be in one layer, but don’t be concerned if they are crowded, because they shrink in the cooking. Drizzle with the oil, season generously with salt and pepper, and turn so they are coated. Cover and cook over medium-low heat, turning occasionally, until they are soft and tender and well browned, about 1 hour.

3. When endives are cooked, dot them with crème fraîche and sprinkle with cheese. Place them about 3 inches from the broiler, and broil until cheese is melted and golden, 4 to 5 minutes. Serve immediately.

Susan Herrmann Loomis teaches cooking in Normandy and Paris. www.onruetatin.com. The latest of her ten books, Nuts in the Kitchen, is published by HarperCollins. Find it in the France Today bookstore.


Originally published in the March 2011 issue of France Today