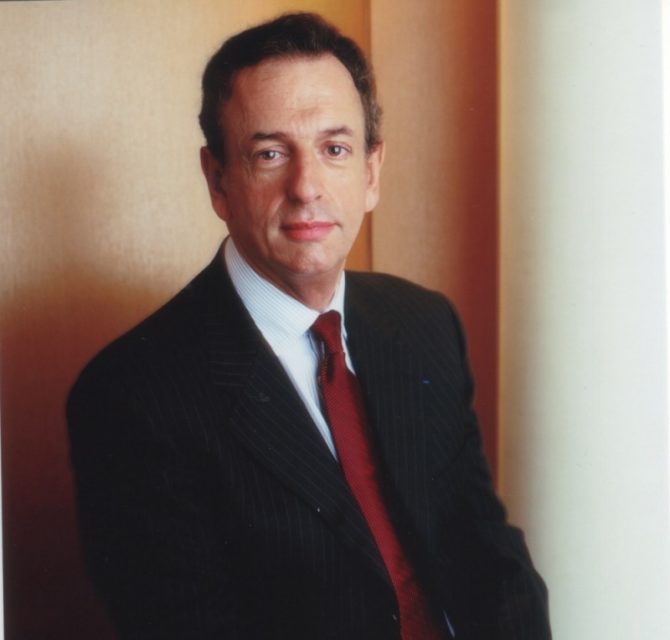 One summer day in 1990, Jean-Paul Claverie, an adviser to France’s then Minister of Culture Jack Lang, met Bernard Arnault, president of LVMH Moët Hennessy Louis Vuitton, the world’s leading luxury group. It was a decisive encounter. Claverie, a connoisseur of ancient art who remains open to today’s most advanced trends, is an agitator of ideas. At 56, he is the elegant archetype of the eternal young man—enthusiastic, visionary and so widely curious that he simultaneously studied international law and medicine. “The path I’ve taken,” he says, “shows how difficult it is to make choices, to limit yourself in terms of interests and emotions.”

Claverie became Arnault’s cultural adviser, in charge of the company’s budget for corporate art sponsorship—LVMH’s “Monsieur Mécénat“. (The word for sponsorship, mécénat is derived from Gaius Maecenas, a counselor to Roman emperor Augustus and the wealthy patron of the poets Virgil and Horace.) Claiming a belief that art is at the same time futile and essential, Claverie is himself a collector of fine 18th-century furniture, which he mixes with works by such 20th-century artists as Chilean Surrealist Roberto Matta and France’s abstract painter Olivier Debré.

In 1991 Claverie persuaded Arnault to set up a strategy of global communication for LVMH based on large-scale artistic and cultural projects. The total amount of the sponsorship checks signed by LVMH is rarely divulged, and the return on that investment is difficult to quantify. What is certain is that, in terms of image, the company could hardly do better.

“Art patronage? It’s a fantastic endeavor based on a shared passion,” he says. “It unifies our collaborators. It’s a real expression of our corporate identity, and it underscores the values that have always defined our 60 companies: excellence, innovation, creativity.”

With the constant aim of reaching the largest possible audience, especially the young, LVMH’s art policy also concentrates on selecting cutting-edge artists, those whose reputation is about to take off. One recent example was the entry of manga-style contemporary Japanese artist Takashi Murakami into the rarefied world of luxury luggage-maker Louis Vuitton; Murakami’s 2003 handbag collection, produced in collaboration with Vuitton’s artistic director Marc Jacobs, eventually resulted in, among other things, a 1,000-square-foot Vuitton shop temporarily installed in the Los Angeles Museum of Contemporary Art as an integral part of a Murakami retrospective exhibition in 2007-2008. (In a similar vein came later handbag collections by controversial American artist Richard Prince.)

LVMH was not listed as an official sponsor of the Los Angeles Murakami exhibit. But in the last 20 years, the group has sponsored some 35 major art exhibits in France and other countries. Picasso et les Maîtres at the Grand Palais in Paris in 2008-2009 was an immense success, with a million and a half visitors. “Never before had the Grand Palais, the Louvre and the Musée d’Orsay worked together,” says Claverie of the Picasso show. In 2007, at New York’s MOMA, the retrospective Richard Serra Sculpture: Forty Years was also very successful.

It’s hard to imagine that those two exhibits, hailed by critics as blockbusters, could have taken place without the support of LVMH. “And yet, not so long ago, the powers that be in France were hardly favorable to corporate art patronage,” says Claverie. “We lagged far behind the Anglo-Saxons.” Everything changed with the Aillagon law. Passed in 2003, it granted corporations a 60% tax credit on the sums they invested in art patronage. The law also favored the creation of corporate foundations, whose number multiplied rapidly in the next few years—there are now 290.

It might be supposed that the current economic crisis had reined in some of this enthusiasm, or imposed drastic reductions. “Not as far as we are concerned,” says Claverie. “We are surviving better than the others. But the crisis has had one positive effect: it forces us to concentrate on the essential, to go back to fundamentals, to keep the bar high on quality.”

For the past three years, LVMH has been one of several corporate sponsors for Monumenta, an annual exhibit organized jointly by the French Ministry of Culture and the administration of the Grand Palais, the vast showcase pavilion built for the 1900 World’s Fair. Each year a major contemporary artist is invited to create a site-specific work for the gigantic nave beneath the building’s splendid Belle Epoque glass roof. This year, from mid-January to mid-February, French artist Christian Boltanski caused much ink to flow with his spectacular installation, Personnes.

Hardly anyone could remain indifferent to the noisy and glacial atmosphere created by Personnes (the word can mean either a person or no one), with its mountain of cast-off clothing some 33 feet high, evoking people who have died or disappeared. The towering pile is surmounted by a crane with a giant claw that grabs clumps of garments, carries them up almost to the glass roof, then drops them—the “finger of God”, according to Boltanski.

(A new version of that installation, entitled No Man’s Land, was installed in the 13.5-acre Wade Thompson Drill Hall of New York’s Park Avenue Armory from May 12 to June 14, 2010.)

“At Monumenta, Boltanski followed Anselm Kiefer and Richard Serra, whom we also sponsored,” says Claverie. “All three of them touched us with their vision, and with the way their projects were in harmony with the space.”

This year, LVMH is also sponsoring the important retrospective devoted to 87-year-old French architect Claude Parent at the Cité de l’Architecture et du Patrimoine, an exhibit designed by Jean Nouvel, an admirer who spent time in Parent’s atelier. “In fact, as different as they are, Boltanski and Parent share one trait,” explains Claverie. “They are both in perpetual search. They break completely with the past, thrust us into modernity, they change the way we perceive the world. Just as Cézanne, Giacometti, Van Gogh and Picasso did.” For all of whom, he adds, LVMH also sponsored exhibits.

Claude Parent, says Claverie, “is the architect’s architect, at the center of the movement of oblique architecture—a ‘territorial Utopian’ according to his confederate, the urban planner Paul Virilio. A rebel at heart, too, who has long unsettled his contemporaries with his activism, his writings, and of course with his buildings, including the metal tower of the Maison de l’Iran at the Cité Universitaire in Paris, or the monolithic concrete church of Sainte Bernadette du Banlay in Nevers. Today, his influence can be clearly seen in Nouvel’s own work, and also in that of Daniel Libeskind and Zaha Hadid.”

Claverie’s interest in architecture seems to be growing—witness the LVMH tower in New York designed by Christian de Portzamparc. “It’s his first major project in the US, where interest in architecture is much greater than in France,” notes Claverie. Portzamparc is building a new storehouse for the group’s Château Cheval Blanc winery in Bordeaux, scheduled to be completed in 2011. “But we have also called upon some young, largely unknown foreign architects too,” he says, “like Kazuyo Sejima and Ryue Nishizawa from the firm of Sanaa, for the Christian Dior store in Tokyo. They have since become very well known and have been chosen to design the new annex of the Louvre in Lens.” (Sanaa also designed the New Museum in New York and the Serpentine Gallery Pavilion in London.)

Claverie claims that the future building of the Fondation Louis Vuitton pour la Création, of which he is the administrator, will be an absolute work of art in itself. In the grounds of the Jardin d’Acclimatation at the entrance to the Bois de Boulogne on the city’s western rim, the building designed by Los Angeles-based star architect Frank Gehry is already starting to emerge. “The foundations are finished,” says Claverie. Scheduled for completion in 2012, the building will resemble “a ship surging out of the trees,” he says. “It will be surprising, not only for what it will contain, by breaking down the walls between genres—the group’s collections, exhibits, debates bridging past and future—but by its aesthetics. And the incredible technology of its glass sails.”

When Monsieur Mécénat is not spending LVMH funds on art and culture, he spends his leisure time at his home near Biarritz, where he swims, walks, does a lot of reading and listens to classical music with the delight of someone who loves to see new music-lovers flooding into concert halls (“we gave away up to 35,000 seats”).