JR Artist: Changing the World with the Power of Paper and Glue

Known exclusively by his pseudonym initials, JR may be one of today’s most influential and widely popular French artists, but don’t try to pigeon-hole him into any particular category.

It’s a bright, sunny December day with a cheek-stinging Mistral. We have come to Château La Coste, a stunning contemporary arts centre and vineyard near Aix-en-Provence to celebrate of the opening of JR’s specially commissioned small-scale work Mind the Gap. Displayed in the new Renzo Piano-designed pavilion, the installation is a hypnotic sight: a moving cylinder-like structure of 700 miniature electric train wagons on tiny rails, synchronised with an ever-evolving mosaic of strips of photographed faces from all over the world.

At the end of the private showing we head to a big canvas tent pitched in a grassy field, where everyone is heaping their plates with delicious, organic Provençal dishes from the buffet. Towards the end of the luncheon, JR jumps up from the table to make a little speech. He warmly thanks his team – a group of technicians from Slovenia who helped him resolve the technical problems – then goes on to praise the artistic vision of Château La Coste, a place he only discovered a few years ago while visiting with his U2 pal Bono.

Unsurprisingly, JR is a natural performer. Tall and lanky, dressed in black jeans and his trademark black fedora and sunglasses, he moves with a nimble kinetic energy, gesticulating with contagious enthusiasm.

Most of the guests at this vernissage already know how Château La Coste works when it comes to commissioning artists. The first step is to find a sense of natural harmony with the landscape that might trigger an idea. The sprawling vineyard estate not only includes an art and architecture trail scattered across a vast pine forest but also three restaurants and an all-suite hotel and spa.

“I kept coming back here because the cappuccino is so good,” JR jokes with an engaging smile. “Then I was on a bike, then in the library reading great books, then at the restaurant eating great food. For months, I didn’t have any ideas. So I sat by the pool and said to myself, ‘Okay, I’ll find any idea.’ ‘Yes, but the show is in three months,’ they reminded me.” His audience titters. 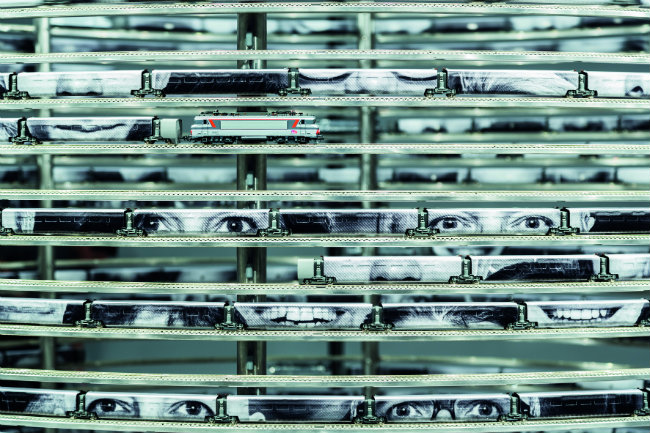 But JR’s laid-back hipster attitude and prankish sense of humour are only one part of his charismatic persona. His projects also reflect a great deal of caring, daring and curiosity about human relationships. (His company is called ‘Social Animals’.) Take, for example, the artist’s 2008-2010 project Women are Heroes, which explored the dignity of women in poverty-stricken or difficult situations and took the artist from the favelas of Brazil to the slums of Kenya and India.

Sometimes it begins with a news story. In 2008, horrified by a sordid affair in Rio involving the gang murder of three innocent kids, JR went to visit the city’s oldest shantytown, Morro da Providência, where he met drug lords, narrowly escaped from shoot-outs, but eventually earned trust from the community. JR then asked locals to plaster his giant photos of women’s eyes staring down at the city, hoping that would call media attention to the living conditions. And it did.

When JR finishes his speech, we chat over dessert about some of his more recent ‘guerrilla acts’, like the heavily publicised 65-foot high photo cut-out of a Mexican toddler peering over a border fence near San Diego. The child is gripping the barrier with his fingers, as if he could topple it with one small push.

Agnès Varda made this portrait of Guy Bourdin on the beach at Saint- Aubin in 1954. Image: Agnès Varda/ JR Ciné Tamaris/ Social Animals

“For me, what I found incredible was that the Border Patrol allowed me to do it,” JR says with a grin. “The authorities had formally forbidden it, saying that they would arrest people who participated. But I thought, let’s go and try. The worst-case scenario is they send me back to France.”

JR goes on to explain that he and his team organised a dinner after putting up the installation. “We built a table that started at one side of the border and finished on the other side. Everyone was eating together, right through the wall. We had the same food and heard the same music played by musicians. For a few hours, you couldn’t feel that there was a wall. I was on the Mexican side, and when I asked the US border guard to have tea with me, he accepted.” He shows us the images on his phone. Which proves, he concludes, that what is supposed to be impossible on paper often turns out differently when the spectators participate.

One of the biggest surprises, JR says, was the international success of the warmly praised 2017 documentary film Faces Places (Visages Villages), a collaboration with Agnès Varda, 89, the spirited and irreverent grande dame of the Nouvelle Vague. Awarded the Golden Eye prize for best documentary at the 2017 Cannes Film Festival, the film went on to win scores of prizes (the LA Film Critics Association, the New York Film Critics’ Awards, and the list goes on).

Best of all, Faces Places was nominated for an Oscar for Best Foreign Film, and three Césars (including best music by French rocker, Matthieu Chedid, known as “M”).

“With Agnès, we’re really happy, like two kids,” JR says. “We had no idea that the film would work in the United States. The producers said to us, ‘Yeah, it’s a little French film, but send it anyway’ so we did. But that’s part of the magic of a project – you never know where it will bring you.”

JR met Varda through her daughter, who had put them in touch. “We got along right away. We didn’t know each other at all and started working together the next day,” he says.

In the film, they embark on a road trip through rural France, travelling in JR’s photography truck (which doubles as a laboratory that makes on-the-spot giant prints.) On their journey, Varda and JR meet anonymous people by chance. They are mostly from small working-class communities – farmers, miners, dockers, a waitress, a postman, all with stories to tell. The life-size portraits pasted on walls permit them to share the idea of art, to be a part of it.

JR’s friendly teasing is also part of the film’s breezy charm. “We’re like an old couple,” he says. “Agnès complains a lot in the film and still continues to do so in real life.” Their obvious affection for each other helps to create a number of poignant moments in the movie, including a re-staging of a moment from Jean-Luc Godard’s film Bande à part in which JR gleefully careens through the Louvre, pushing Agnès around in a wheelchair.

“I’ve never really had a link with museums,” JR says. “I began with graffiti, running through tunnels, climbing rooftops and signing my name.” Then, one day, JR found an old camera left behind in the subway and started documenting his friends’ adventures while they were out tagging. “When I started glueing photocopies of my photos on walls at 17, I never thought about things like, ‘I’ll make a press book and go and see someone at a gallery so they can decide whether they’re good or not’,” he shrugs.

However, JR was soon noticed by various art-world figures and his career took off. “I presented things I hadn’t done in the street in my first show and, thanks to that, I could self-finance my work. I didn’t want to be sponsored by Badoit or Évian or any other brands, not even NGOs. For the past 15 years I haven’t worked with a single sponsor.” When the artist received a TED prize in 2011, JR used the award money for a new project, Inside Out, urging his audience to go out onto the street and paste their own messages with his photo portraits.

For the past seven years, JR has lived in New York and uses the city as a base. “I love the energy – that continuous urgency, that constant tension. It’s motivating for an artist because as soon as you meet people you know right away – either you’re going to do something together, or you’re not.”

After this quick stop at Château La Coste – where he’s parked a miniature version of his photo booth truck, much to the delight of visitors who have come to see Mind the Gap – JR is heading over to San Francisco to work on a new, large-scale project. “I want to work in depth on all the layers of the city because there are some very big problems with homeless people there and I want to visualise that by going to different neighbourhoods.”

‘Can art change the world?’ ask the followers of JR’s Instagram diary, which number more than one million people.

Obviously, JR believes it can… “But I still ask myself that question each time I begin a project,” he muses. “Because what we see changes who we are.” 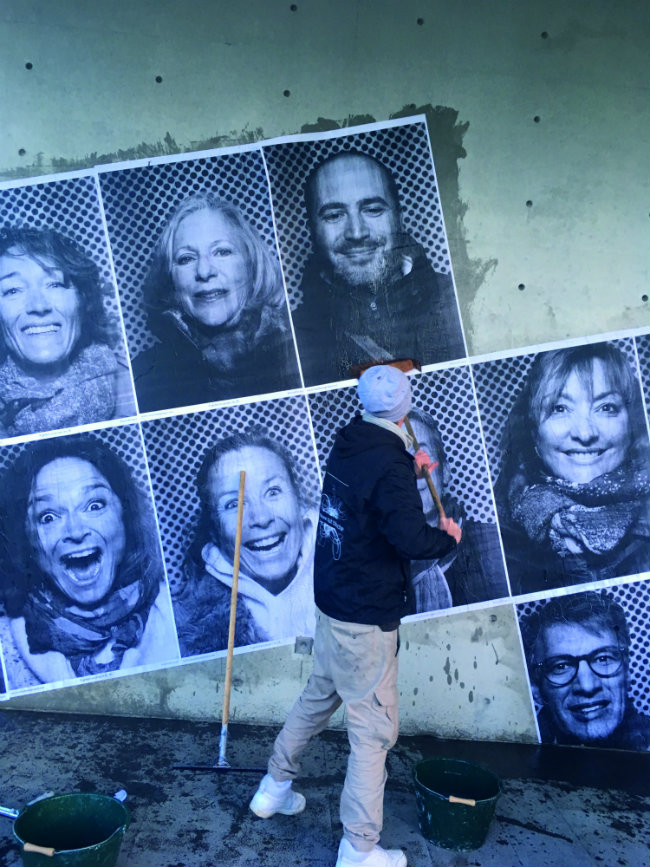