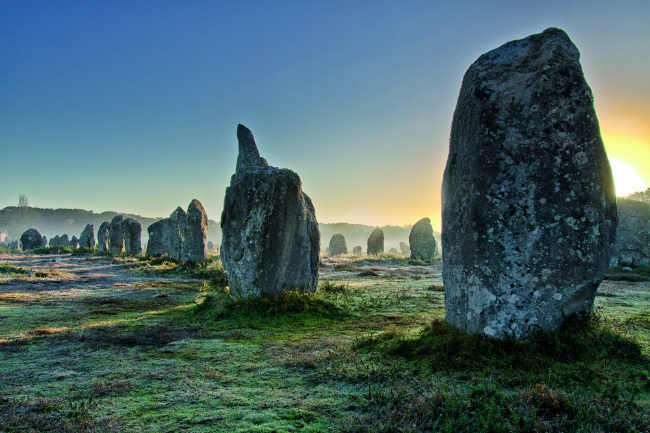 Is it a ruined prehistoric temple? An ancient astronomical observatory perhaps? Unlikely. Roman soldiers turned to stone? All right, this particular hypothesis never held much sway with the scientific community. One thing is certain, for centuries the Alignments of Carnac – the largest megalithic site of its kind in the world – has confounded archaeologists.

Rising in neat rows along Morbihan’s rugged coastline in Brittany, the 3,000 standing stones stretch along four kilometres in four ‘clusters’: Ménec, Kermario, Kerlescan and Petit-Ménec. Made up of distinct ‘structures’ – monumental tombs known as tumuli and dolmens on the one hand, and the famous perked-up stones hemming in the burial grounds on the other – the elusive pierres dressées stand like so many question marks, evading easy answers. One after the other the hypotheses of old are being debunked. The very term ‘alignment’ is even being thrown into question – depending on your vantage point the stones are not in fact all aligned. The latest theory is that the stones represent a physical, and perhaps mystical, threshold between two spaces or worlds. 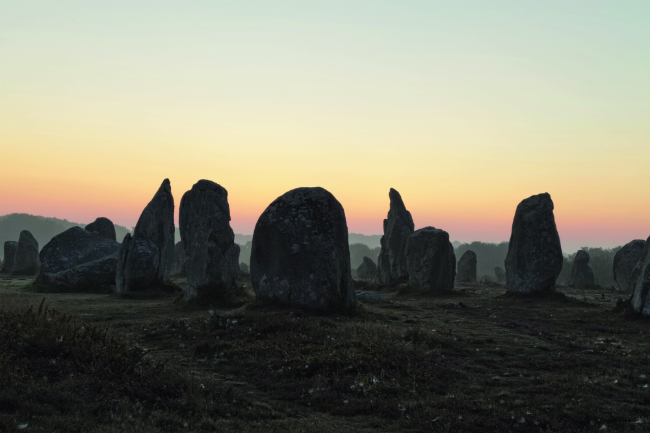 Year-round guided tours shed light on the prehistoric marvels and the most recent views on their inception and purpose. And there’s plenty more to see for those keen to explore (and even crawl into!) the tumuli fanned out in the nearby forest. You won’t need to get down on your knees to explore the Tumulus Saint-Michel, however, the crowning glory of Morbihan’s standing stones. Towering over the nearby rockscape, this is the largest grave mound in continental Europe – and the Carnac Alignments’ greatest riddle. Jewels and precious objects unearthed from the tumulus’s burial chambers, now on display at the Maison des Mégalithes museum, were key in belying the theories of old and offering a fascinating glimpse into the inner workings and hierarchical order of the surprisingly advanced Neolithic society behind the mysterious standing stones.

After months of renovation and high-tech jiggery-pokery, the Maison des Mégalithes recently unveiled a volley of digital displays, 3D models and temporary exhibitions unravelling the mystery of the stones – as well as a new terrace with a great view of the alignments. Don’t miss Skedanoz, the ethereal light and sound show set to illuminate the stones (and the lives of its elusive ‘builders’) in July. For more information, visit www.menhirs-carnac.fr/en 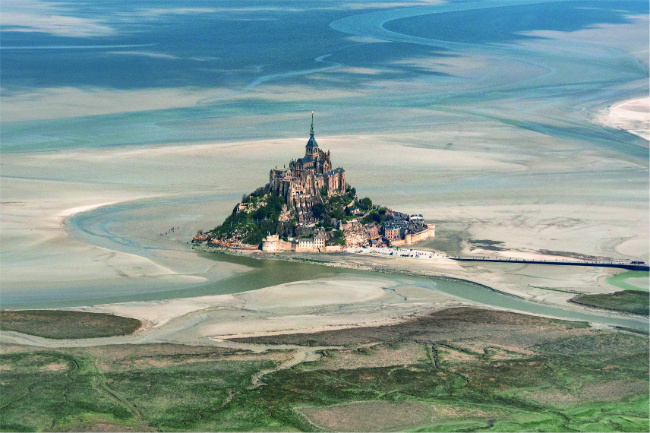 As inception stories go, Mont-Saint-Michel’s is a rather kooky one. Legend has it that one night, in the year 708, the Archangel Michael, leader of God’s armies against Satan, appeared to Saint Aubert, Bishop of Avranches, in a dream, ordering him to build a sanctuary in his name at the top of the rocky islet then known as Mont-Tombe. The sceptical ecclesiast ignored the directive. The following night the Archangel returned, repeating his order, again in vain. Determined to sway the stubborn bishop, on the third night the Archangel pressed his finger into Aubert’s forehead and repeated his command. Aubert awoke the next morning to find a hole burned into his skull. By 709, a sanctuary devoted to Saint Michael had been erected on the spur that straddles the border between Normandy and Brittany.

At the request of the Duke of Normandy, Benedictine monks settled in the abbey in 966, swiftly putting the isolated speck on the map, not only as a major place of pilgrimage but as a centre of enlightenment where vast numbers of manuscripts were produced and stored. Following the Revolution, the monks were driven away and, in a stroke of poetic (in)justice, the freshly renamed “Mont Libre” was turned into a prison for refractory priests. On the upside, its new iteration as a gaol had the merit of saving Mont-Saint-Michel from destruction. In 1811, an Imperial decree transformed the abbey into a reformatory, mainly for common-law and political prisoners. Some 60 years later it became one of the very first landmarks in France to be awarded historic monument status.

Now listed as a UNESCO World Heritage Site, it is a key stage on the pilgrimage route to Santiago de Compostela – and one of the most awe-inspiring at that. From the lofty cloister affording wind-knocking views over the bay to the mammoth refectory, the abbey itself and the more than twenty rooms besides, the medieval complex has enough nooks and crannies to keep you busy all day.

The abbey will lend its backdrop to a light show, Chronicles of the Mount, between July 7 and September 1. From 7.30pm to midnight, visitors will be invited to wind their way through the monument bathed in the warm glow of Amaclio’s shimmering displays and eye-popping illuminations. For more information, visit www.abbaye-mont-saint-michel.fr/en 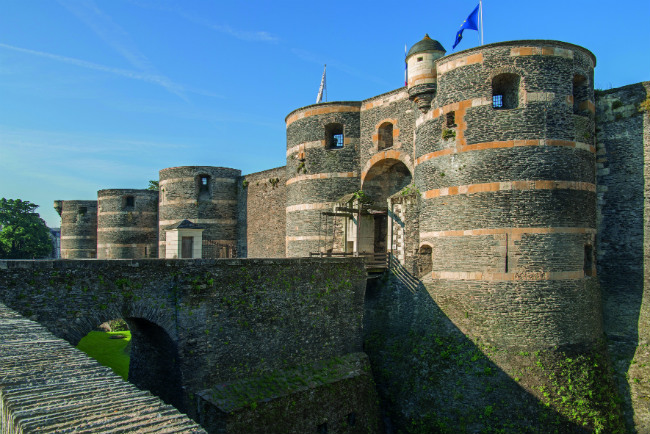 On a bluff overlooking the River Maine, this forbidding 13th-century fortress may stand like a mammoth ‘keep off’ sign, but those brave enough to venture within its (110-foot!) walls will be amply rewarded. In turn a ducal and royal stronghold built on the remnants of Roman and Gaulish settlements, every last stone speaks to the castle’s rich legacy. Among its many claims to fame, the pile was the medieval seat of the mighty Plantagenets, who ruled England from 1154 to 1485. In fact, in 2012 a petition was launched demanding that the Crown Jewels be offered to Angers as compensation for the execution of its last pretender to the English throne. Needless to say, the Queen declined to part with her regalia.

Like many royal fortresses, it was eventually deserted for the creature comforts of lavish châteaux and acted as a prison for seven centuries. Fouquet, Louis XIV’s disgraced finance minister, did a spell here after being arrested by d’Artagnan. Its dark past aside, its biggest draw is undoubtedly the Apocalypse Tapestry. Commissioned by Louis I, Duke of Anjou, this is the oldest and largest surviving set of 14th-century French tapestries and forms the centrepiece of the castle’s collection. Far more than a (surprisingly) vivid depiction of the last struggle between Good and Evil, complete with seven-headed beasts, fire and brimstone, the artwork offers a window into the political turmoil of a nation in the throes of the Hundred Years’ War. For more information, visit www.chateau-angers.fr/en/ 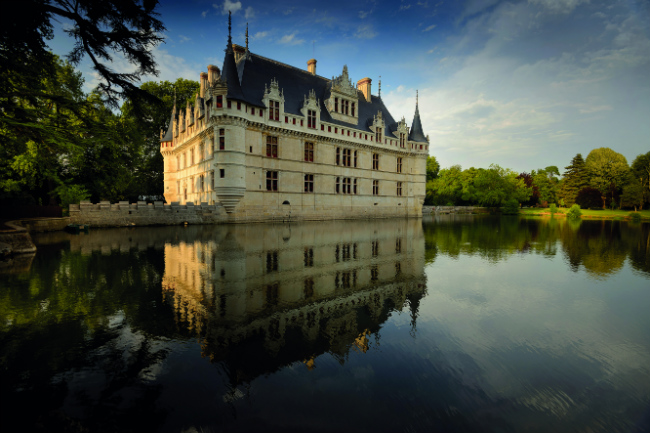 Often bypassed on the Loire Valley château trail, Azay-le-Rideau may not have the pizzazz of a Chambord but it is one of the finest Renaissance piles around – with all the curlicued trimmings and quite the regal connection too. Languishing on an island in the Indre, the former medieval fortress of Azay was purchased in 1510 by Francis I’s treasurer, Gilles Berthelot, who set about transforming it into one of the grandest châteaux in the land, Italianate trappings, fairy-tale turrets and all.

By 1522, his new residence was complete, though the aristocrat had little time to enjoy his palace. His penchant for finer things and conspicuous display of pelf landed him in hot water with the king and he was swiftly charged with embezzlement. Fearing for his life, Berthelot fled the country, abandoning his wife and château. He died two years later in Cambrai. Meanwhile, a peeved Francis I seized the castle and wasted no time in gifting it to one of his loyal followers, Antoine Raffin, to the great displeasure of Berthelot’s soon-to-be widow. It changed hands several times over the centuries, each new owner putting his own extravagant stamp on the palace.

Fresh from a lengthy top-to-bottom renovation, Azay-le-Rideau has emerged as a true masterpiece of Renaissance architecture. Among the highlights is the minutely reconstructed bedroom of Philippe Lesbahy, Berthelot’s deserted wife; and of course the dramatic and intricately carved staircase gracing the northern façade – one of the oldest and best-preserved examples of a ‘straight staircase’ in France. For more information, visit www.azay-le-rideau.fr/en/ 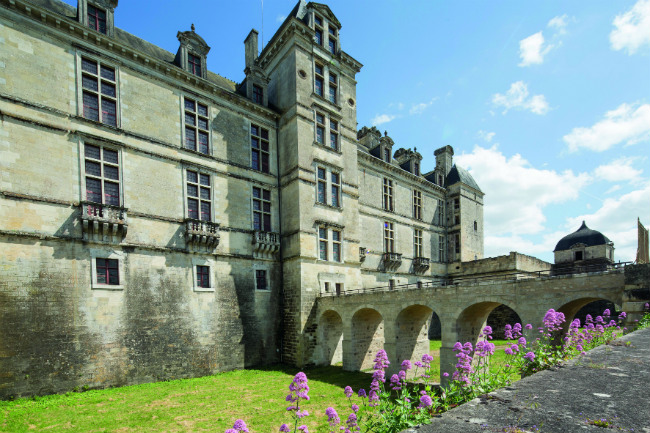 Built in the heart of Gironde during the reigns of Henry IV and Louis XIII, this sprawling château is the perfect storm of stately splendour and military pomp, with monumental fireplaces, tapestries galore, and painted ceilings to boot. But it’s far more than a pretty face and in fact has quite the chequered past, as does its disgraced owner, the Duke of Épernon. The ambitious captain (and precursor to the Musketeers) shot to the highest ranks in the late 16th century following the assassinations of both Henry III and Henry IV, before dying a pariah under Louis XIII. Ironically, or fittingly, the nobleman’s motto was Adversis clarius ardet – He shines brightest in adversity.

After lying empty for decades, the château was given a new lease of life as a women’s prison in the 19th century, and remained as such well into the 1950s.

From June 1 to November 4, the château will play host to acclaimed photographer Bettina Rheims’s new exhibition Détenues (Detained). Featuring stark portraits of female inmates captured in their cells, the showcase seeks to restore women’s sense of dignity and identity in an inherently dehumanising environment. For more information, visit www.chateau-cadillac.fr/en 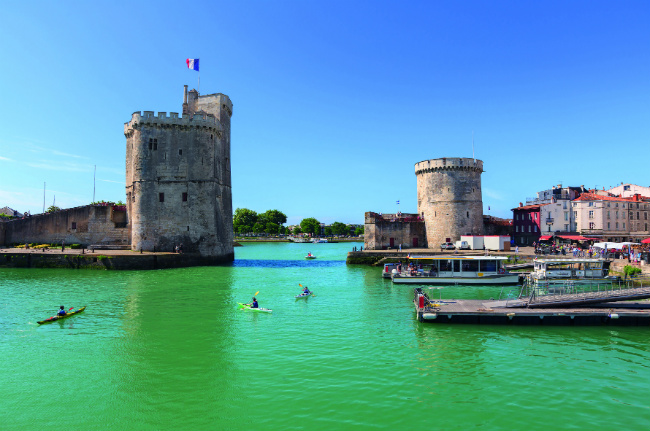 Standing guard over the old port like sentinels, La Rochelle’s medieval towers – Tour Saint-Nicolas, Tour de la Chaîne and Tour de la Lanterne – are the city’s emblems, and have withstood countless attacks in their time; the worst being the 14-month siege laid by Cardinal Richelieu and his Royalist forces (ably assisted by the Three Musketeers) in 1627. The local population was reduced to eating slugs, before moving on to saddle leather boiled in water.

Once royal seats and key defensive bastions at the gateway to the Atlantic, the dungeon-like Saint-Nicolas and Chaîne towers were eventually turned into gaols, mainly for Huguenot dissidents and foreign sailors in the 16th century, before becoming military prisons in the 1800s. Centuries-worth of carved initials and illicit graffiti chipped in the keeps’ stone walls offer a window into the lives of generations of inmates. As for the Lanterne tower, it was put to use as a lighthouse and remains the oldest on the Atlantic coast to this day – though it too was used as a navy prison for a spell.

A new exhibition, Sur Les Murs. Histoire(s) de graffitis, will highlight the historic graffiti carved into the mighty towers by the shipwrecked sailors and other prisoners held captive within their walls until June 25. The monument will also stage a graffiti takeover until May 31, inviting street artists to create edgy artworks and installations. From July 1, the Tous à la Plage exhibition will delve into the history of – and 19th-century craze for – the bains de mer and chart the birth of the first seaside resorts. For more information, visit www.tours-la-rochelle.fr/en/

Previous Article JR Artist: Changing the World with the Power of Paper and Glue
Next Article Highlights from the Cannes Film Festival 2018