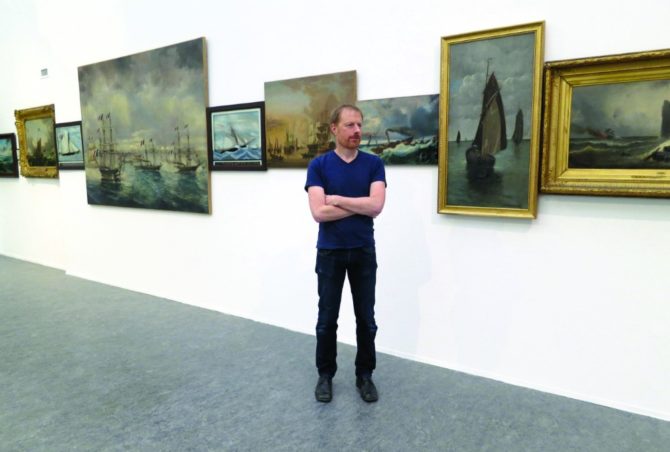 My first thought when I entered this exhibition by Berlin-based, British artist Simon Faithfull was “of course!” He’d taken marine paintings from the museum’s permanent collection, all from different periods, and in a disparate selection of styles and mediums, and rearranged them in a straight line, sides touching, so that all the seascapes would align for the eye to sail along one uninterrupted horizon.

Faithfull’s work often reaches the extremities of our world, where man can no longer see or breathe unaided, such as with his most recent project, a boat which was deliberately sunk and then had underwater cameras placed to record its gradual transformation into a reef. This show includes some older work, such as the trance-inducing chair dangling from a weather balloon and, for the first time in a gallery, digital drawings from his Dover-to-Calais ferry residency.

I was entranced by his meditations on entropy, which include the shipwreck turned into a home for marine life and the abandoned whaling station overrun by seals, and by the crystalline beauty in the 44 video, a montage of Antarctica as seen from a porthole. I was mostly struck by the deep humanity of a body of work which rarely features any humans.

This exhibition crowns a three-year collaborative project, Time and Place, involving England and France under the theme of the “Changing Landscape”, which explored the environmental and social aspects of the marine landscape.

Tip: This exhibition is very much worth making a stopover for, on your way in or out of Calais. You’ll be thinking about what you’ll see here for years to come.

Previous Article Fondation Louis Vuitton: Paris’s Museum in the Cloud
Next Article Chasing the Sun: Writers on the Riviera