The Best of the New in Paris 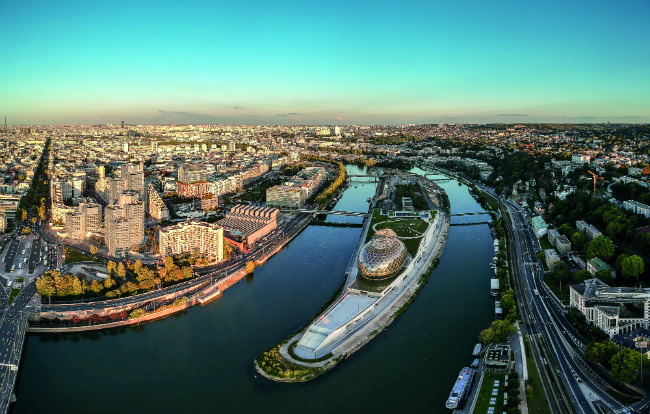 Paris is a city in constant flux, says Jennifer Ladonne. There are new shops, restaurants and bars opening all the time, not to mention concert halls, museums and art galleries…

Whether you’re a regular visitor or planning your very first trip, you’ll want to be up-to-date on all the newest and best things to see and do in the City of Light. Here’s our take on a few of the capital’s not-to-miss newbies in everything from culture to shopping for a taste of what Parisians and visitors alike are discovering this season. 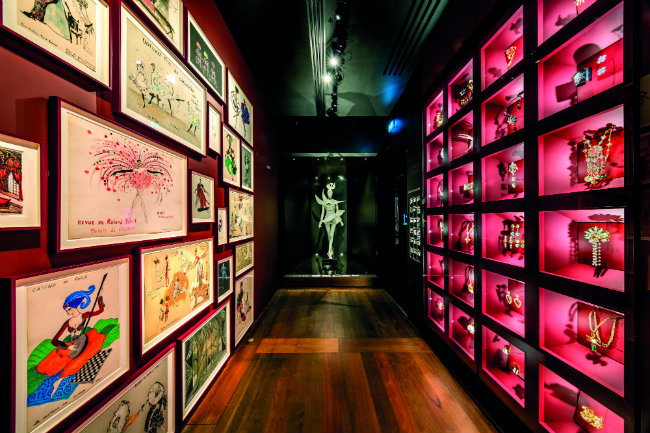 Saint Laurent’s influence on late-20th-century fashion cannot be overstated, and this new monument to his life and work chronicles – through films, photographs, video clips, fashion sketches and, of course, the fashions themselves – all the designer’s inspirations and influences, from modern art to Africa. 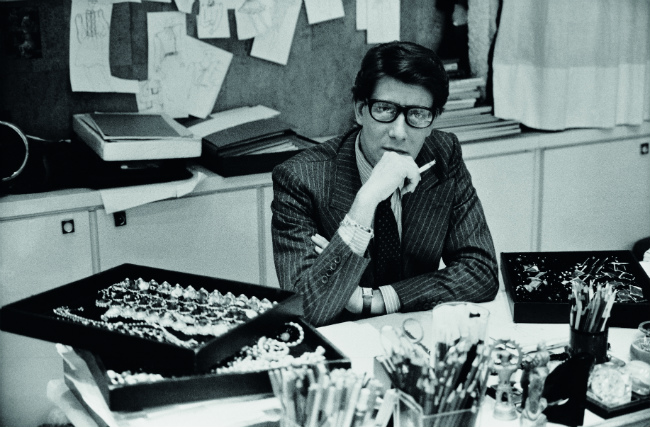 Yves Saint Laurent in his studio

It was at this 19th-century mansion where Paris’s leading ladies of fashion were offered tea in the elegant downstairs reception room before being ushered into Saint Laurent’s inner sanctum to choose next season’s custom-designed wardrobe. Coming here now, you can imagine yourself in the company of muses and celebrity clients like Betty Catroux, Loulou de la Falaise, Catherine Deneuve, Paloma Picasso, Liza Minnelli and Bianca Jagger, standing at the designer’s muslin-covered drafting table, still strewn with talismanic objects: pencils and straight pins, even a pair of his iconic tortoiseshell glasses, as though he had just gone out for lunch. 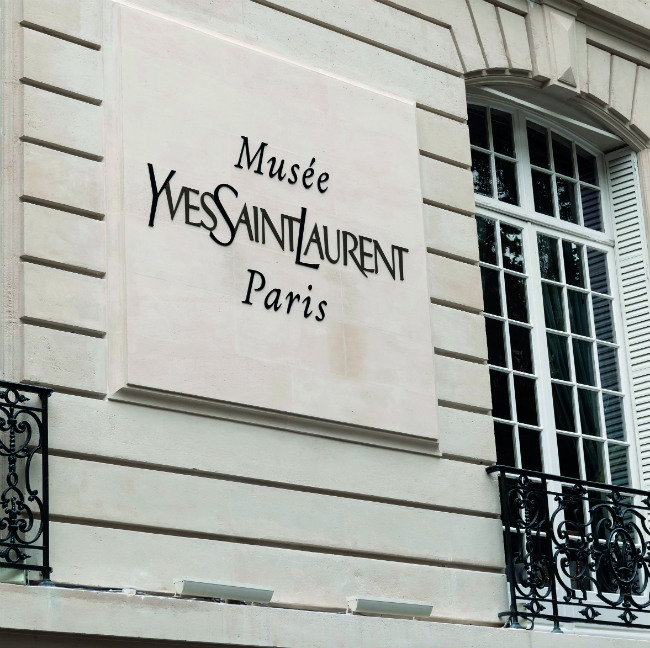 Apart from his studio, which remains untouched, the rest of the mansion was redesigned as a sleek, contemporary backdrop for the dazzling colours and rich ornamentation of clothes from the 1960s up through the 1990s. Viewers are guided chronologically through the fashions, from the ground-breaking safari and tuxedo jackets to major pieces from signature collections: the Mondrian dresses of 1965 and the embroidered brocades of the Ballets Russes collection (1976), mini-dresses featuring straw and wood from African-influenced seasons and tour de force gem-encrusted evening gowns and boleros. Artworks from Saint Laurent’s private collection punctuate the fashions, and a dramatic wall-to-wall display highlights his opulent jewellery and accessories.

At the museum’s cosy bookstore you can stock up on the colourful “Love” posters Saint Laurent created for every new year (€9), postcards and books on the designer’s life and works. 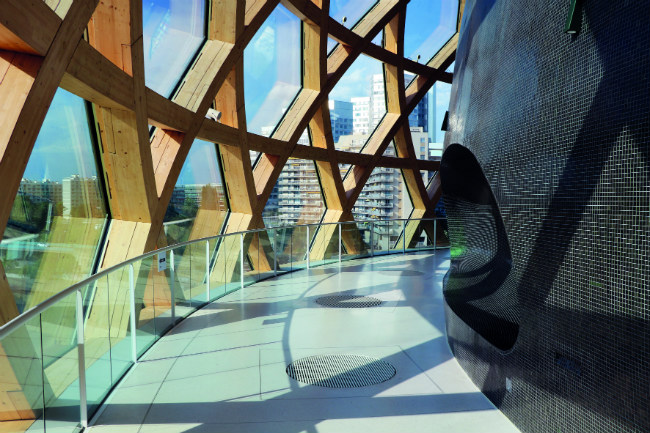 Shimmering in the sunlight like a futuristic glass yacht in dry dock on the Île Seguin, La Seine Musicale is Paris’s latest music venue, following the opening of Jean Nouvel’s Philharmonie in 2014. The spheroid structure, designed by Shigeru Ban with Jean de Gastines, incorporates a sail-shaped wall of solar panels that rotates to face the sun, shading the building during the day while generating electricity, some of which is used to light it up dramatically at night.

The hall was conceived as a multi-purpose venue to host not only classical concerts – it is home to the Insula Orchestra – but also pop and rock performers. Bob Dylan played here last spring and has been followed by Herbie Hancock. It has also already hosted the Alvin Ailey American Dance Theater as well as symphony orchestras and musicals, including West Side Story last autumn. 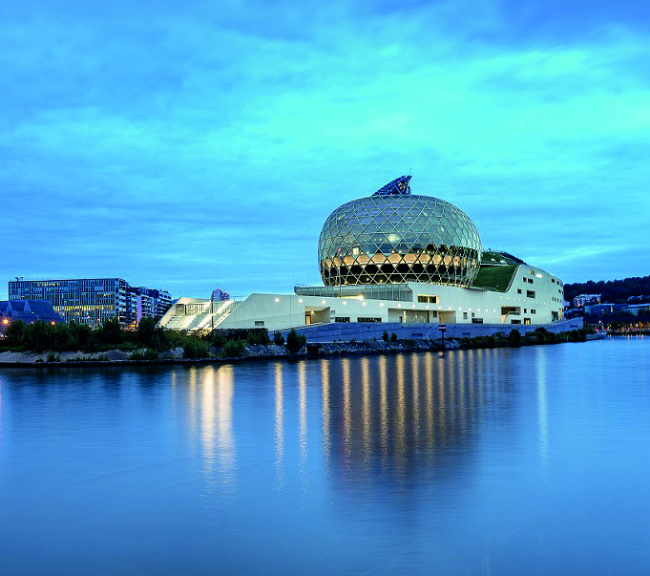 A 28-acre sliver of land at the river’s bend just downstream from the Île Saint-Germain, the Île Seguin was by turns a farm, a laundry and tannery, and a leisure site for fishermen and hunters until 1919, when Renault bought the island for its car production. The factory became France’s largest automobile manufacturing plant, employing up to 30,000 workers until it closed in 1992. For years afterwards, Paris didn’t quite know what to do with the island, which required an extensive clean-up of chemicals and asbestos from the razing of the factory, and several major projects fell through.

In 2010 a portion of the island was signed over to the Seine Musicale project, which took another seven years to come to fruition. The site’s two concert halls (a smaller hall seats 1,500, while the 4,000-seat hall can accommodate 6,000 standing room for rock concerts) are joined by two restaurants: Octave, serving gastronomic fare, and the O 2 Scènes brasserie. The space also houses a jazz club and the raised Bellini garden, part of the complex’s vast sustainable development project, offering views of the Seine, the city and the suburbs. Boutiques, art galleries and other cultural spaces are due to open this spring, and a hotel is also in development.

After Les Baux-de-Provence, Lyon, Chartres and a bunch of other French cities, Paris has finally got its own arts-themed lights extravaganza. Like Les Baux, which draws 60,000 visitors a year to the tiny Provençal village, this one was created by the French organisation Culturespaces, overseers of a dozen or so permanent cultural centres in repurposed monuments throughout the country, including the Musée Jacquemart-André in Paris and the Hôtel de Caumont arts centre in Aix-en-Provence. 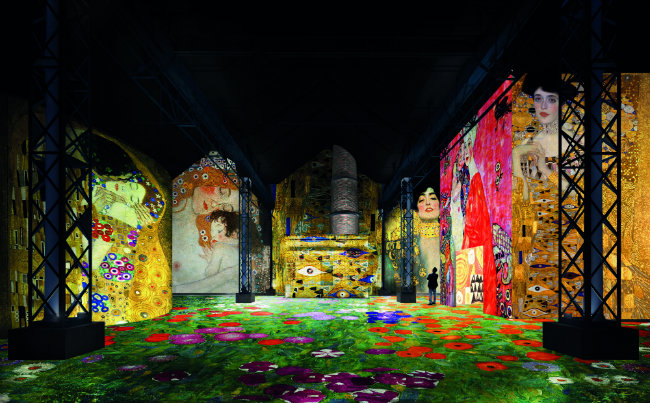 A soaring abandoned iron foundry in the edgy 11th arrondissement is the setting for Culturespaces’ latest project, a riotously colourful visual feast of digital images projected on walls, ceilings and floors from more than a hundred video projectors for a total immersion in the great artworks from the world’s iconic painters, accompanied by an original soundtrack. The opening programme takes on the glittering work of Gustav Klimt in a 30-minute explosion of colour and sound as images of the artists’ famous works are projected on every surface, as though visitors are walking into a painting come alive. An exciting and often moving experience, what’s best about the show is its accessibility and its ability to enchant people of all ages and interests – the kids will love it. A second, shorter programme will focus on the lesser-known Vienna-born artist Friedensreich Hundertwasser. 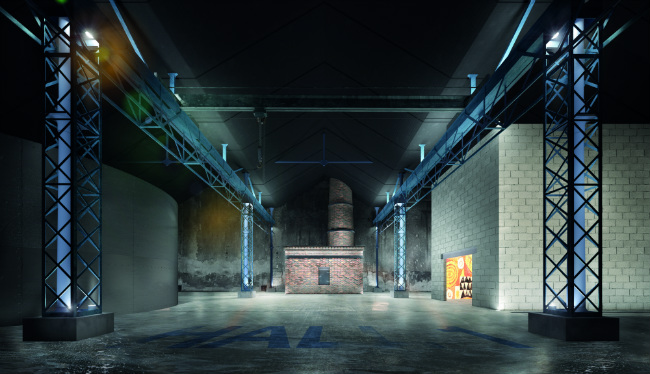 The Atelier des Lumières, a five-minute walk from the Père-Lachaise cemetery, is easily accessible from three nearby metro stations or by bus, as indicated on the website. 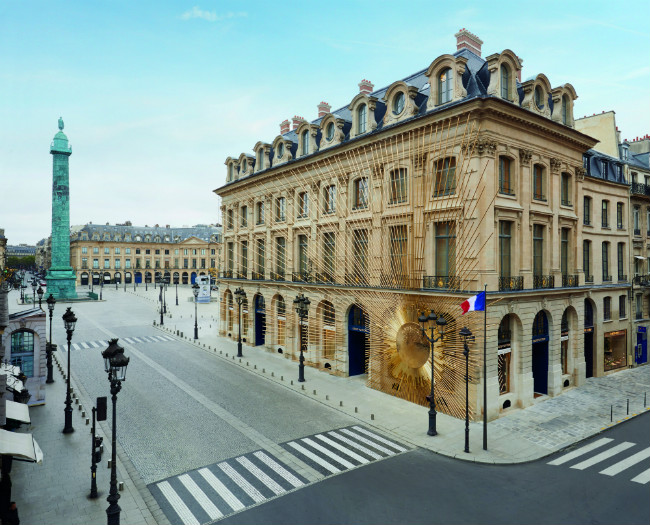 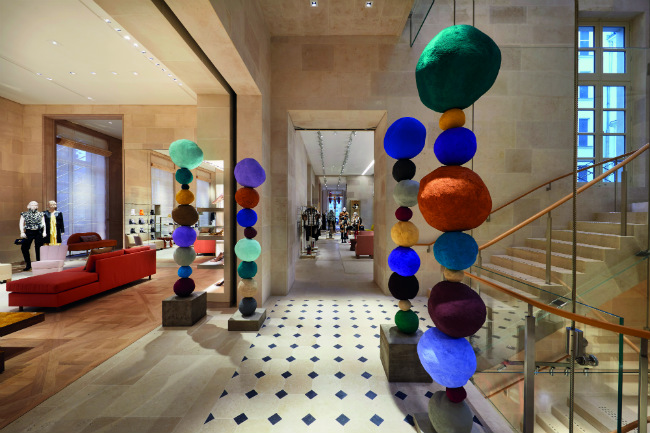 This is a homecoming of sorts for the label whose first boutique opened on nearby rue Neuve des Capucines in 1854. Though a magnificent sculpture of a Louis XIV-worthy sun radiating across the entire façade, installed for the boutique’s opening last autumn, has been removed (it may return, stay tuned), the boutique has no rival in Paris. The glamour of vivid artworks from more than 20 contemporary artists, including a larger-than-life gilded statue of the Sun King himself standing on a plinth made of recycled champagne bottles, mingles with the wares, which themselves resemble so many objets d’art – with prices to match.

Next door, on the rue Saint-Honoré side, the stunning new Guerlain Parfumeur boutique has an even longer history in the area. The brand’s first boutique opened in 1828 on nearby rue de Rivoli (where Le Meurice now stands), before moving to rue de la Paix in 1841, and finally settling on place Vendôme in 1935. 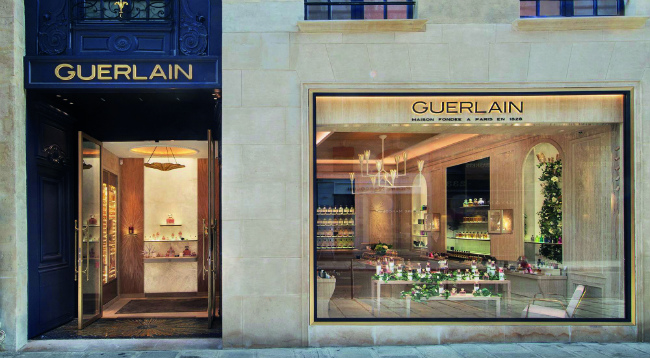 The new boutique – all carved wood marquetry crafted by master artisans, travertine marble and original light fixtures by both Diego and Alberto Giacometti – is a thoroughly sumptuous affair. The art and craftsmanship here serves as the showcase for 110 of the 1,100 fragrances the house has created since its inception, plus its famous customisation and consultation services.

Customers are invited to create their personal fragrance profile with the help of a digital perfume “organ” that helps them define exactly what speaks to them in a perfume from the Guerlain fragrance library, categorised by each of the 14 signature raw ingredients. Once they’ve chosen their perfume, they can fill their own personalised flacon. 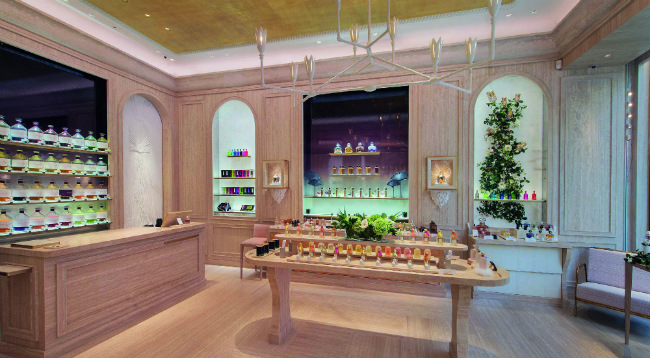 Interior of the new Guerlain store

As any nose knows, taste and scent are inextricably linked, and for maestro pâtissier Pierre Hermé fragrance has been a powerful incentive throughout his 20 years of audacious creativity. Now, in a masterstroke of marketing, the pastry chef has partnered with the Provençal cosmetics giant L’Occitane to create a new concept store for a blitz of flavours and fragrances at 86 Champs.

Aside from two luscious perfumes, Grapefruit-Rhubarb and Jasmin-Immortelle-Neroli, and their attendant soaps, lotions, lip balms, etc., there’s not much else to connect the two French household names at this exuberant circus of a boutique on the Champs-Élysées. 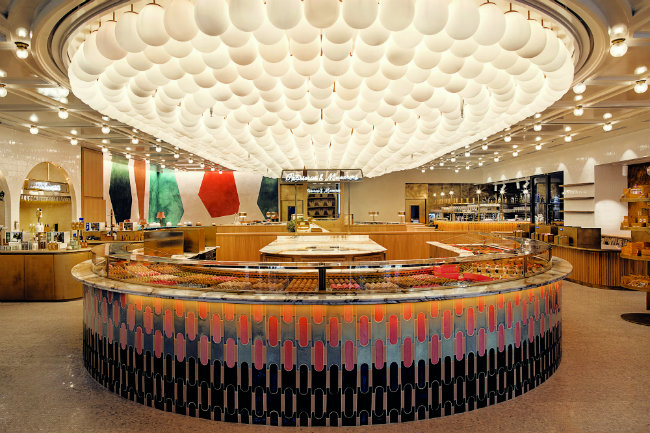 86 Champs, the meeting place of Hermès and L’Occitane

Still, with a huge semi-circular counter featuring all of Hermé’s sweet delights surrounded by the world of L’Occitane, plus a bar and dining counter, its good, delicious fun for the whole family. Hint: go for breakfast (8.30-10.30am) when the waffles and crêpes are made to order before your eyes.

Previous Article Life in France: A Pizza Vending Machine in the Countryside
Next Article My Meudon: Explore the Town Just Outside Paris