The Cats of La Romieu, A Medieval Village in Southwest France 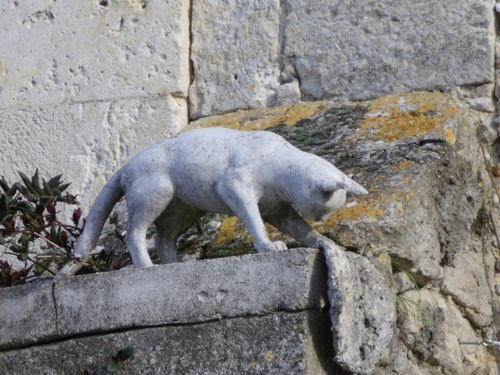 One of the main tourist attractions in the small medieval village of La Romieu, in southwest France, is the abundance of cats to be found there. They sun themselves on ledges or peer out from windows, charming those who pass by. They are well behaved, never cause any problems, and always stay in the same place because they are made of stone.

They are the work of artist Maurice Serreau who moved to this quiet village to retire. One day in the early 1990s, he decided to sculpt a cat. Then he made another and another. He made a cat for the butcher, the baker, and if there was a candlestick maker, I’m sure he got one too. Monsieur Serreau just couldn’t stop himself making cats and soon they were appearing all around the village. When people began to ask why the town had so many cat sculptures, he explained that he had been inspired when he overheard a grandmother telling her grandchildren about a legend. It was the legend of Angeline and her cats that saved the village, and it goes something like this…

In 1338, a little girl called Angeline was born in La Romieu. While she was still very young, both her parents died suddenly, and she was adopted by a kind couple that lived nearby. As Angeline grew, so did her love for cats and there were always a few that followed her wherever she went.

During this time, two years of severe weather caused a famine and the townspeople were hungry. They were searching everywhere for anything that was edible. Soon the village cats started to disappear as the starving villagers resorted to eating cat stew. Angeline was horrified and begged her adoptive parents to let her hide a couple of cats in the attic. They couldn’t say no to the poor child. She had already lost her parents and they didn’t want her to suffer the loss of her beloved cats as well, so they agreed. Since Angeline hid one male and one female, her kitten collection increased steadily.

Finally, to everyone’s relief, the weather improved, crops flourished, and food was again plentiful. But because there hadn’t been any cats to patrol the village streets, the rats had overrun the town and were ravaging the crops. The townspeople held a meeting to try to find a solution.  Everyone was surprised but happy when Angeline announced that she had twenty cats (as the cat population in her attic had increased tenfold) and they would be more than happy to help with the rat problem. All were in agreement and the cats were let loose in the village. The rats soon disappeared and the crops were no longer threatened.

Village life returned to normal and Angeline went back to helping her adoptive parents work in the fields, always surrounded by her cats. But as she grew older, something very strange happened to Angeline: people say her face began to take on the appearance of a cat and even her ears transformed into pointed cat ears. A bust of Angeline, looking very cat-like, can be seen on one of the buildings in the village.

Like Angeline’s cats of long ago, it’s Serreau’s cats that are helping La Romieu today. His cat sculptures have become a popular tourist attraction bringing in much needed revenue to the village coffers.

La Romieu is a small village with a population of about 500 (not counting cats). It’s located in southwest France in the Midi-Pyrénées region and is situated on one of the Chemin de Saint-Jacques (Camino de Santiago) routes. “The legend of the cats” is the property of the Tourist Office of La Romieu and is used here with permission.

Margo Lestz is the author of “French Holidays & Traditions,” an entertaining collection of short stories explaining the curious histories behind many French holidays and traditions. Margo also blogs as the Curious Rambler at http://curiousrambler.com