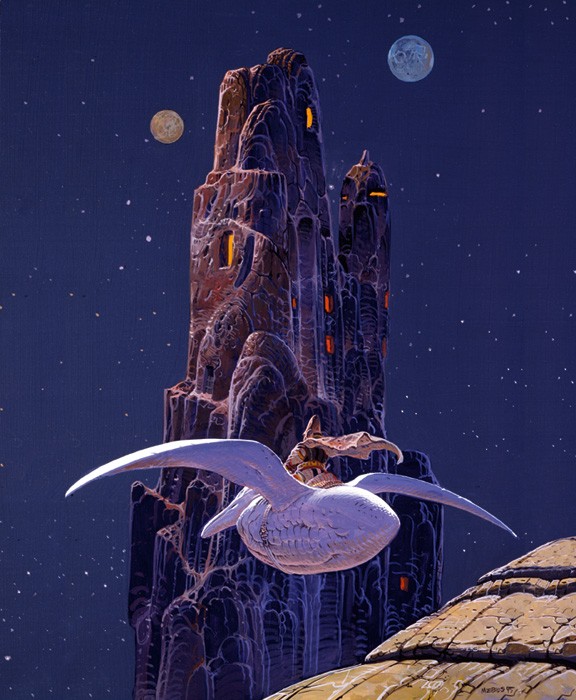 For an understanding of Charles de Gaulle’s middle way during the Cold War, Astérix might seem an unlikely place to start. After all, Astérix is set in Roman-occupied Gaul, 2,000 years before the general’s presidency; it’s about a small, moustachioed warrior and his overweight sidekick Obélix; and, of course, it’s a comic book. However, for some, the character created by René Goscinny and Albert Uderzo is not only a brilliant comic invention but also a perfect embodiment of the country in which the feisty Gallic hero was first introduced in 1959, a France caught between the American and Soviet superpowers. “The indomitable little Gaul fighting off invaders quickly resonated with the French public,” explains Joel E. Vessels, author of Drawing France: French Comics and the Republic and an instructor of history at Nassau Community College. “It fit the beleaguered mindset of the French at the time.”

Even today, the character continues to represent the determinedly independent French spirit. Perhaps that’s why a McDonald’s advertising campaign last summer showing Astérix and his friends enjoying their traditional feast, but underneath the golden arches, attracted such comment. As the daily newspaper Le Figaro asked: “After he resisted the Romans, have the Americans finally scalped the invincible little Gaul?”

That might have been only half serious, but it does illustrate the fact that comic strips, or bandes dessinées, play a real role in what historians term “the construction of Frenchness”. To put it simply, Astérix is part of the French national identity.

That’s probably not surprising. After all, the influence of comics in France is significant. The country boasts the largest comic market in the world after the US and Japan, worth almost €330 million in 2009, and it sells some 40 million comic albums a year. The annual Festival International de la Bande Dessinée in Angoulême is the biggest in the world, say the organisers; San Diego’s Comic-Con doesn’t count, they argue, because it is an exhibition as opposed to an artistic festival. Founded in 1973, the festival now attracts 250,000 visitors, and other, smaller festivals can be found all over the country throughout the year. “There is at least one bande dessinée festival a month in France,” says Jean-Christophe Ogier, president of the French Association of Comic Critics and Journalists (the ACBD in French).

The bande dessinée, often called simply BD, is not just popular, however. It is also widely accepted as a legitimate art—the “ninth art”, according to a term used since the 1960s. It’s been enshrined as such in the Cité Internationale de la Bande Dessinée et de l’Image in Angoulême, a cultural center that includes a museum, the Musée de la Bande Dessinée, along with a specialized library, a bookstore and a cinema. The museum is designated as a Musée de France, putting it in the same category as the Louvre—which, as it happens, held an exhibition of BD in 2009 in connection with the comics publisher Futuropolis. “It’s hard to think of a more striking example of how the French have embraced BD as an art form than putting it in the Louvre,” says Vessels.

Nor was that exhibit unique. In October 2010, the Biennale d’Art Contemporain in Le Havre examined the “new scene of equality” between BD and contemporary art, while an exhibit called Archi & BD at the very serious Cité de l’Architecture & du Patrimoine in the Palais de Chaillot focused on architecture as portrayed in comics. And the first solo exhibition of Moebius, the pseudonym of artist Jean Giraud (also sometimes known as Gir), famous for the western serial Blueberry and the science-fiction Arzach, ran for six months at the Fondation Cartier, through March 2011.

“Bande dessinée has ever greater recognition as a genuine visual art,” says Futuropolis editorial director Sébastien Gnaedig. This legitimacy, he says, is probably due in large part to the fact that comics in France have long ceased to be solely aimed at children and adolescents. Of course, there’s always been much for adults to enjoy in the likes of Astérix: take Astérix’s duel with a Roman soldier in the style of Cyrano de Bergerac in Le Cadeau de César—converted into Hamlet fighting Laertes in the English version, Caesar’s Gift. Or consider the Roman official Saugrenus in Obélix and Company, a parody of the prime minister of the time, Jacques Chirac. (The French word saugrenu means preposterous or ridiculous.) But in the 1960s and 1970s, magazines such as Hara-Kiri, L’Écho des Savanes, Métal Hurlant (cofounded by Moebius) and A Suivre helped firmly establish that BD could also be aimed explicitly at adults. “It was like a revolution that saw comics come to be taken more seriously,” explains Willem De Graeve, curator at the Belgian Comic Strip Center in Brussels.

The result was that BD comedies and adventures came to share shelf space not just with more adult-orientated fantasy or science fiction, but an ever-expanding range of genres. Best sellers at Futuropolis include Jacques Tardi’s adaptation of Jean- Patrick Manchette’s existential crime novel La Position du Tireur Couché; Mattéo by Jean-Pierre Gibrat, which follows its hero through the First World War, the Russian Revolution and the Spanish Civil War; and Un Homme Est Mort with Etienne Davodeau illustrating author Kris’s story set during a miners’ strike in 1950s Brest. Perhaps particularly notable in recent years, however, have been the many autobiographical works such as David B.’s Epileptic, detailing the author’s childhood and his brother’s struggle with the condition; Persepolis, by writer and illustrator Marjane Satrapi, depicting her years in Iran during the Islamic revolution, which was also made into a successful animated film; and Canadian Guy Delisle’s travelogues from his stays in Shenzhen and Pyongyang, to name just a few that have had English translations.

In fact, according to De Graeve, while the children’s and teenagers’ books dominate the best-seller lists of BD, works aimed at adults account for the majority of titles published each year.

Talking to a Belgian expert is a good idea if you want a proper understanding of French language cartoons, because Belgium probably has an even stonger BD heritage than its neighbor. Father of them all, of course, was Hergé, creator of Tintin, whose ligne claire style of draftsmanship remains hugely influential today. Hergé and Tintin, in fact, now have their own Hergé Museum, in a superb, delightfully askew new building by French architect Christian de Portzamparc, in Louvain-la-Neuve, south of Brussels.

But Hergé was far from alone, and Belgian artists and authors are responsible for many of the most popular series and characters in France, such as Rob-Vel’s Spirou, Lucky Luke by Maurice De Bevere (better known simply as Morris) or Peyo’s Smurfs. In later years, others have kept up the tradition, including writer Jean Van Hamme with series like Largo Winch, with artist Philippe Francq, and XIII with artist William Vance (William Van Cutsen).

When talking about the Franco-Belgian comics scene, historically France is the junior partner, says De Graeve, and even today Belgium, with some 800 BD artists, has more per capita than practically anywhere else in the world. “For a country of only 10 million inhabitants,” says De Graeve, “that’s a big number.”

In recent years, however, the most important international contribution to French BD has come from Japan. Since the 1990s manga has mushroomed, and now accounts for one in three BDs sold in France. Naruto, created by Masashi Kishimoto, alone had five albums in last year’s top 20 best sellers. That influx has helped sustain BD’s growth in recent years, and is credited with reigniting French teenagers’ interest in the medium. It’s also helped bring in a new female audience, since manga titles tend to be popular with girls. “Publishers are very happy to have found manga,” says Ogier.

Not everyone is so enthusiastic, though. Some worry that manga dominates the market to the detriment of Franco-Belgian rivals. Uderzo, for instance, is no fan of the genre, and used his 2005 book Astérix and the Falling Sky to poke fun at it with the introduction of a group of evil aliens named Nagmas (a deliberately transparent anagram). But if manga is hurting the traditional Franco-Belgian BD it is perhaps in a more subtle way.

Look at the top-selling books of last year and, in fact, manga still accounts for only a small minority. What’s notable is not new manga dominating the list, but rather how long-running many of the bestselling French series are. Titeuf, which made its debut in the early 1990s, is among the youngest. Astérix celebrated his half century last year; Blake and Mortimer, another Belgian classic, dates back to 1946; Tintin is over 80.

At the same time, sales figures also show new editions of these old favorites selling fewer copies than in the past, and back catalog sales also sliding. The lesson, says Xavier Guilbert, editor-in-chief of the comics website du9.org, seems to be clear: their age is beginning to show. “It’s reasonable to think that the stalwarts of the comic books market might not resonate as much with the younger generation today,” as he puts it.

What the success of manga over the last decade has done, says Guilbert, is not so much push out traditional BD as distract French publishers from the falling sales they were seeing in their existing stables anyway. “They went after manga and forgot to develop their own catalogs,” he argues. That’s a problem now, because with most of the successful Japanese titles now translated into French, manga sales have started to slow.

For fans, in fact, that might not be all bad. Publishers have mainly compensated for the fall in sales of each title by expanding the number of titles on offer. In 2000, the number of new BD titles published was 1,137, according to figures from ACBD secretary general Gilles Ratier. In 2009, it was 3,599—more choice for readers; and it might also mean, says Guilbert, that publishers will focus on selling books rather than brands, and on the quality of the writing and artwork.

One other worry is the competition now facing new artists. It has perhaps been more feasible to make a living as a cartoon artist in France and Belgium than elsewhere, but it’s never been easy. With an industry built on ever more titles, each selling fewer copies, it’s going to get even harder. The question is what that might mean for the stars of the future. “I’m often asked who the new Tintin or Lucky Luke is, but it is impossible to say,” says De Graeve, “because when they were published there were not so many comic strips around. Today production is exploding.”

“In fact,” he adds, “ there are those who say that if Hergé or Morris had started today they might never have broken through.”

Originally published in the October 2010 issue of France Today; updated in May 2011