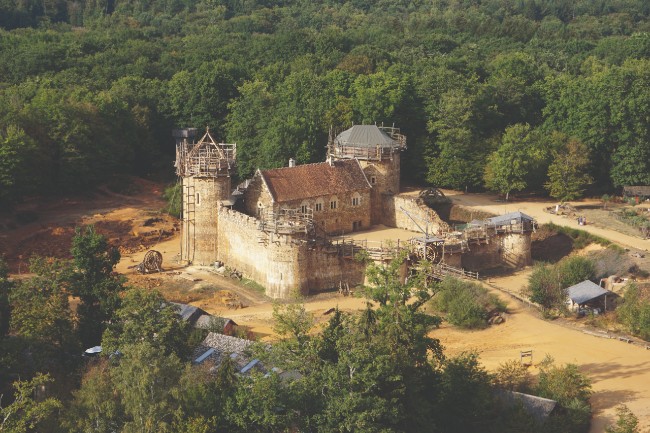 In a unique project, a team of 50 master builders are constructing a medieval castle using only materials and methods that would have been available 800 years ago. Dominic Bliss checks how they are getting on

There’s a little corner of northern Burgundy that’s firmly stuck in the Middle Ages. Deep in a forest just over 100 miles south of Paris, using only medieval methods and materials, a team of builders is hard at work constructing a genuine 13th-century castle: the Château de Guédelon.

It really is like stepping back in time. There are no modern cranes or lorries or electric tools on this building site. As far as is possible, all the craftsmen and women here both work and look exactly as their ancestors would have 800 years ago. 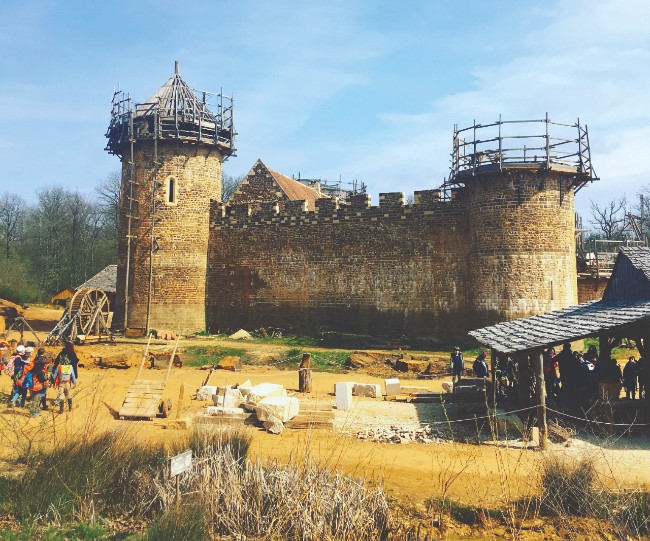 Construction on the Château de Guédelon began in 1998 and will continue for at least another decade. Credit: Bourgogne Franche Comte Tourisme

Dressed in woollen smocks, there are quarrymen hewing rocks out of the ground, stonemasons tapping away with their chisels, carpenters hand-sawing trees cut from the local forest by lumberjacks, blacksmiths forging the iron tools, tilers digging clay and ring it in ovens. And transporting all these materials around the site in wooden carts are three carthorses, Paloma, Tyrolienne and Arpège.

But there’s another key difference between Guédelon and a modern construction site: here, they actively encourage visitors to interact with the builders while they work. Impressively, the growing castle attracts around 300,000 visitors annually, bringing in €5m a year, which finances the entire project. 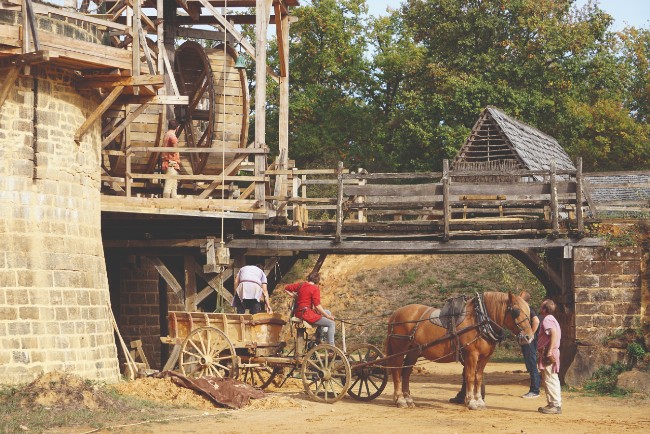 But why go to all this effort? “We call it experimental archeology,” says Maryline Martin, head of the private company that owns the Château de Guédelon and its surrounding site. “Essentially, that means we’re constructing a 13th-century castle in order to understand medieval building methods.”

Don’t you dare call this project a medieval re-enactment, however. Maryline bridles at any sort of comparison to history fans who dress up in period garb or stage mock battles. Her goal is to understand the world of medieval castle-building rather than to put on a show.

The attention to detail is meticulous. Instead of cranes there are wooden lifting devices such as hand winches, capstans and treadmills. To build a working medieval kiln for the tiles, the master mason visited the British Museum in London to examine an original one. Even the mortar is a non-hydraulic lime variety – a complete anachronism on a 21st-century building site and very tricky to work with.

From the very start, a committee of archaeologists, historians and architects have been overseeing the project, ensuring that everything remains true to the 13th century (though there are some concessions to modern health and safety laws: there is a telephone on site, for example, in case of emergency, and workers must wear safety glasses when chiselling, and hard hats – concealed beneath straw hats or beige cloth – and steel toecap boots).

Construction on this amazing edifice, the brainchild of Michel Guyot, the owner of a nearby Renaissance-era castle, started in 1998. Progress is understandably slow, so completion isn’t expected until 2030 at the earliest. But it is all starting to take shape: two of the castle’s exterior curtain walls are in place, as is the main hall, the chapel, the kitchen, the guardrooms, the bases of the four towers, and some of the crenellated walkways that join them together. There is still, however, plenty of work to complete on the gatehouse, the great tower and the portcullis.

Tito through the oculus of a gothic window. Photo: Clément Guérard

Since this is a living museum and place of education, as well as a building site, the workers are encouraged to down tools and talk to visitors whenever the occasion arises. Schoolchildren and adults wander around the castle, observing and chatting to them.

On the day I visit, Alex Hecker is breaking rocks in the quarry. He is buzzing, having just spent an hour sweating with a sledge hammer and chisel in an effort to cleave a huge rock in two. “Suddenly, crack! I split it right down the middle,” he says. “I was delighted.”

Baptiste Fabre is one of 16 stonemasons on site. “Between chiselling by hand and using an electric drill, I prefer doing it by hand,” he says when I ask him if he ever gets frustrated at the glacially slow rate of work. “Besides, there’s a pleasure in working with no machine noise. I prefer that.” 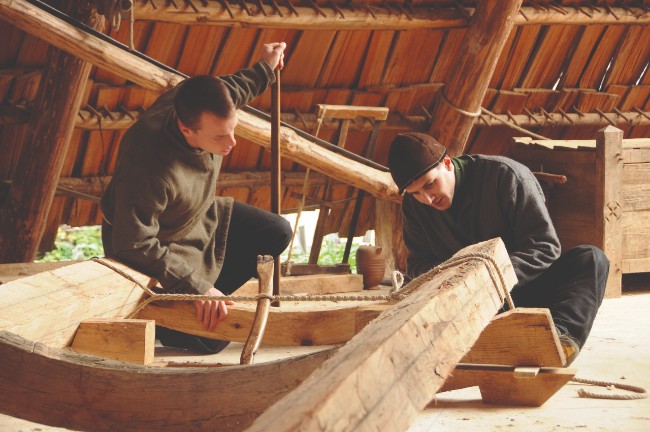 Only technology available in the Middle Ages is used. Photo: Dominic Bliss

Toendra Schrauwen is another stonemason. Like his colleagues, he is wearing plastic glasses to protect his eyes. He believes his 13th-century equivalents would have worn see-through cloth over their eyes, or a small sheet of metal with slits in, like a knight’s armour. “Otherwise they would have been blinded in minutes by the chips of stone,” he adds.

Véronique Coudré has just started on her first day at Guédelon, employed as a potter. Her job is to make plates, bowls, cups and gourds for the visitors’ restaurant using clay dug from the ground close to the castle and a potter’s kick wheel. Next to her is Bruno Feval, a tilemaker charged with producing 80 tiles a day, destined for the castle roof. He explains how he and his colleagues had to build five prototypes of kiln before they achieved a suitable design.

Nearby is Guédelon’s kitchen garden, where much of the food served in the visitors’ restaurant is grown. Antoine Quelen is tending the various cereals (for making bread) and legumes and vegetables such as broad beans, peas, chickpeas, lentils, snake beans and carrots. “They are glorious,” he says of the carrots. “We’re growing white ones and red ones because orange carrots didn’t exist in France in that period of the Middle Ages.” 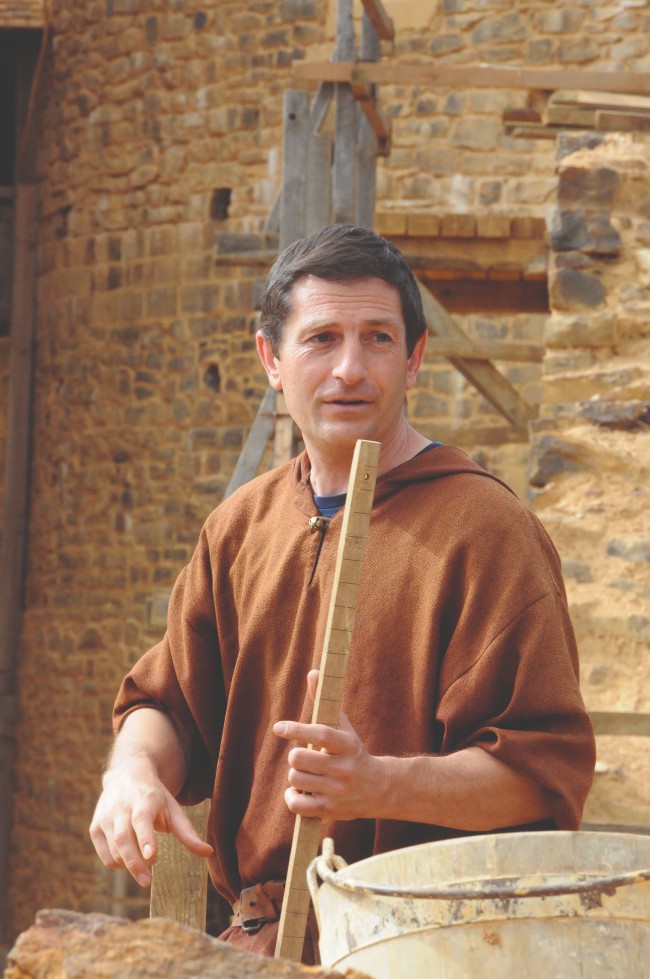 Florian Renucci is master mason at Guédelon, the equivalent of a modern-day architect and project manager all rolled into one. He demonstrates how one of his treadmills works: a man walks steadily inside a huge wooden wheel, like a hamster, using his bodyweight to winch stones up to the first-floor level of the castle. Beside him is a clay gourd full of drinking water and a leather parchment case containing paper instructions for that day’s work. No iPads or bottles of Évian to be found here.

Florian says he would like the already gentle pace of work at Guédelon to slow down even further.

“So that I can continue working here until retirement,” he jokes. And he revels in the calm atmosphere of his workplace. 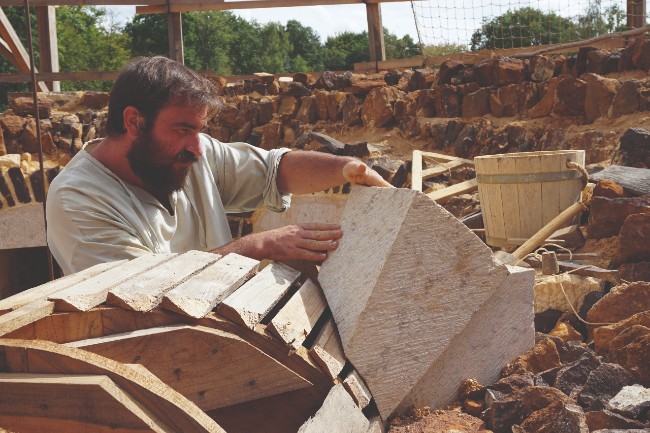 “On a modern construction site, electric tools are absolute carnage. Here, on the other hand, we have no loud tools, no loud motors, no cranes, no risk of electric shock, no toxic products, no pollution, no chemical fog. By choosing to work in the style of the Middle Ages, we have eliminated all these risks. I hate to think how dangerous it is, for example, for Filipino workers on construction sites in Dubai.”

Florian is used to explaining to visitors the reason for his self-imposed toiling. “We’re in the business of research,” he says.

“The goal is to find out what architecture was like in the Middle Ages. At the same time we want to teach builders how to work with traditional tools and materials, and we want to show our visitors how it’s all done. So not only are we builders, we’re archaeologists and teachers too.” 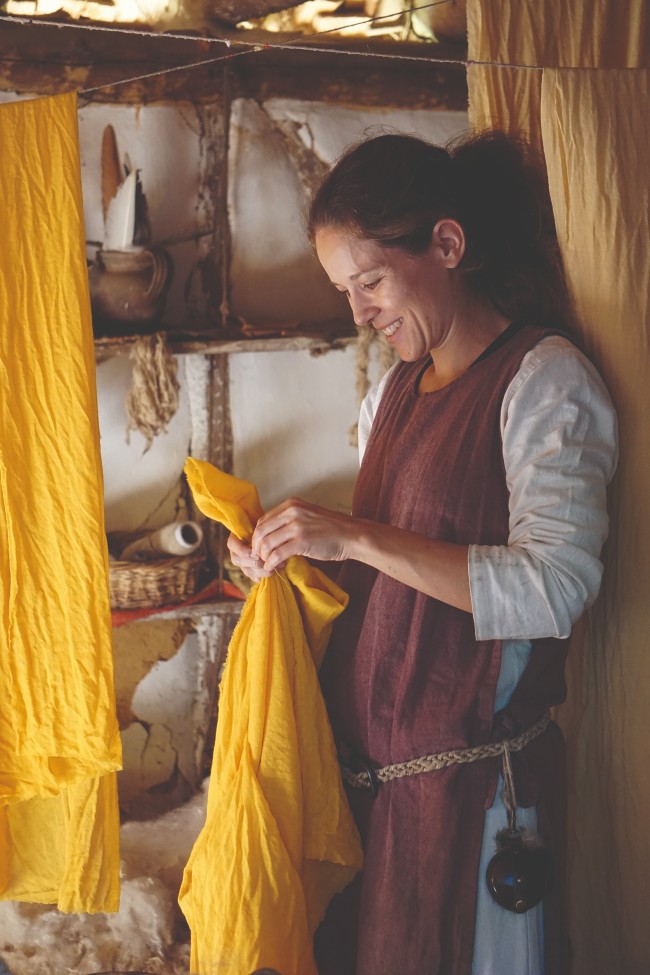 As well as working with medieval methods and materials, everyone also has to look the part. Photo: Bourgogne Franche Comte Tourisme

Although the château is now a major tourist attraction, boss Maryline says she was sorely ridiculed when she first embarked on her project. Many saw it as the grandest of follies.

“At first, people didn’t understand what we were doing, and were even aggressive towards us,” she says. “They were sure we were cheating.” She describes how, in the early days, sceptical locals would spy on her workers from the forest, convinced that once the daily visitors had departed, power tools would appear from hiding places. As the years went by, however, the critics came on side. They realised that the techniques and tools being employed were genuinely medieval.

It has now been 21 years since the project broke ground. Although completion of the castle itself is planned for around 2030, Maryline believes she’ll never see the end of her grande oeuvre.

“The main works will need perhaps another dozen years to complete. But after that there’s the interior design, the décor, the furniture, the windows, the carpets and the wall coverings. That could all take several decades more. It’s endless.” 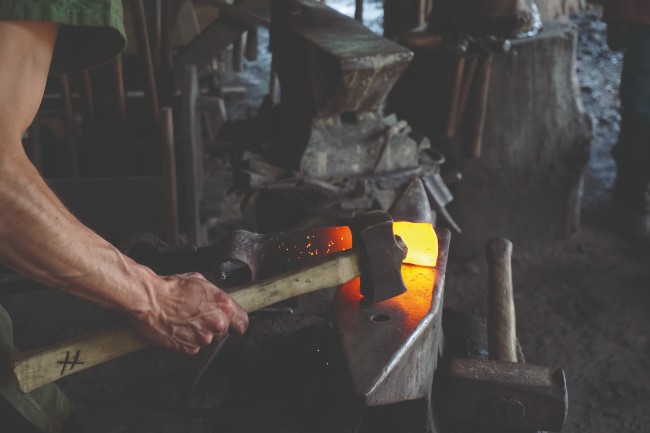 The Château de Guédelon is near the village of Moutiers-en-Puisaye, in the Yonne département of Burgundy. The nearest railway stations are at Cosne-sur-Loire and Joigny, both of which connect with Paris Bercy. By car, it takes around two hours to arrive from Paris (slightly longer than the train).

The site is open to the public from spring to autumn every year. Many visitors return year after year, since the castle changes dramatically as construction work progresses.

Next year’s season will run from the beginning of April until the beginning of November. During the winter months, frost makes it impossible to work with non-hydraulic lime mortar (and there was no modern cement in the 13th century…). 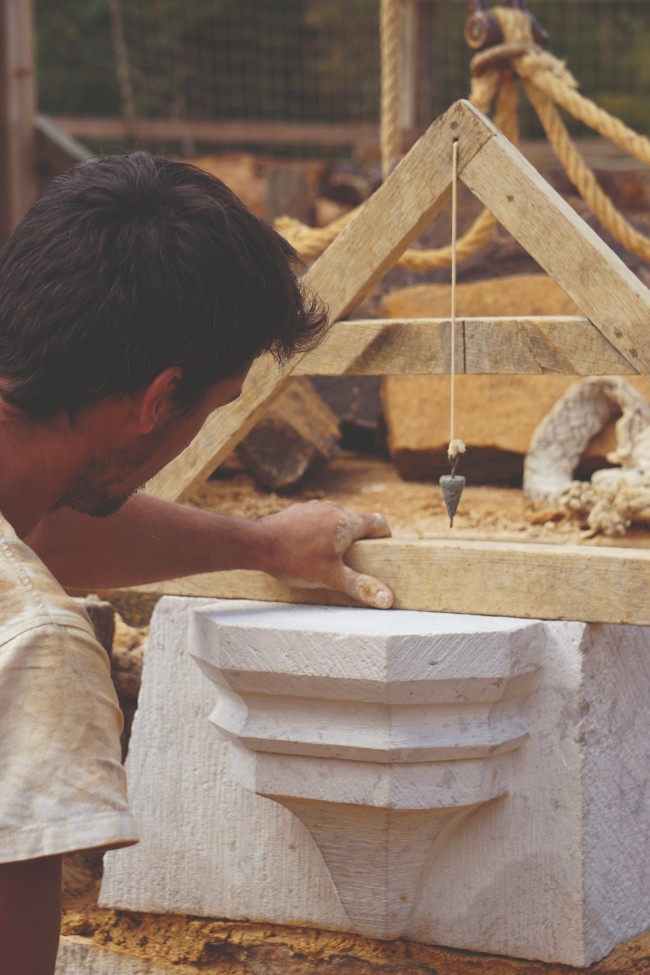 Previous Article Win a Bottle of Award-Winning Cognac Worth €550 (UK Entrants Only)
Next Article Spray It, Don’t Say It: Altearah Emotive Cosmetics