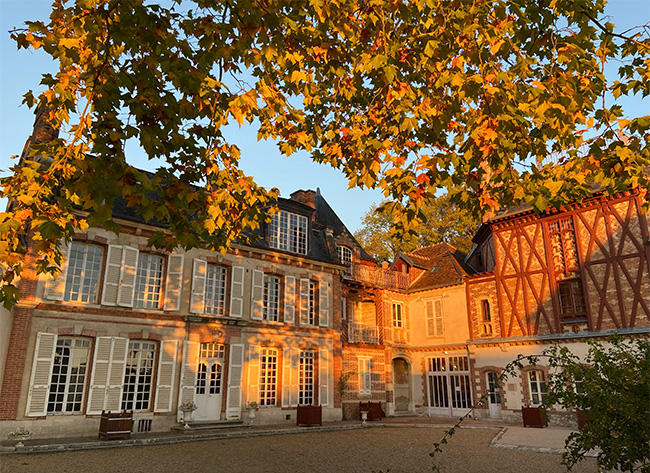 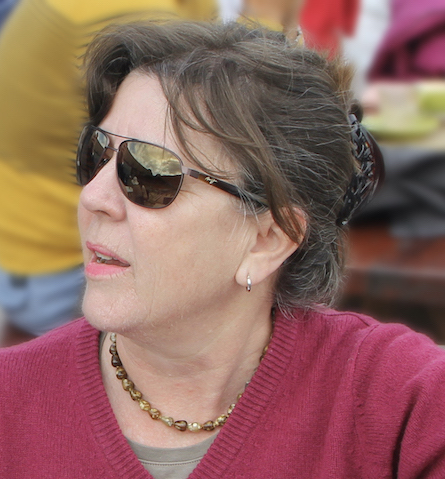 The first exhibition in Paris in over a century of Rosa Bonheur’s paintings and sculptures, currently on until 15 January 2023 marks the bicentenary of the animal portraitist who was the most famous, highly paid artist of the 19th century until she fell into complete oblivion in the 20th. Her resuscitation, and the Musée d’Orsay exhibition, are due to Katherine Brault and her family, single-handedly responsible for putting Bonheur firmly back in the limelight. As a complement to the exhibition, I recommend that you take a 45-minute train and visit the Château de By, today the Rosa Bonheur museum, owned by the Brault family.

The Château de By sits upstream from Paris atop the banks of the Seine in the small town of Thomery. Thanks to Brault, who had no prior knowledge of the artist, and her daughters, the château is now not only a museum but also a very nice tea room and guest house where visitors can stay in rooms previously used by the artist as her winter studio or in the bedrooms once occupied either by Bonheur or her friend Nathalie Micas. These have been lovingly restored based on photographic plates and written descriptions. Dinner is served to overnight guests, the dishes based on modernised versions of recipes found in Bonheur’s cookery books.

Sit down for some tea in stunning surroundings © Château Rosa Bonheur

Brault, just nominated as one of the 100 Women of Culture 2022, is a native of Fontainebleau, some seven kilometres west of Thomery. In 2014, after several years working in communications, gastronomy, and coaching visual artists, Brault decided after her divorce to return to her hometown and establish “a cosy, multi-functional guest-house in a large 18th century house.” But that house proved hard to find.

Then one day an estate agent suggested she encompass the 19th century and visit the Château de By which had been on the market with all its contents for 10 years. “I used to visit as a little girl and remembered it as dark and gloomy,” Brault laughs. “Also it was way too expensive for me: €3.5 million! My budget was €1.5 million.” But the estate agent told her the sale price was “widely negotiable” and then left her alone to wander around the property for three hours. Despite the dust and cobwebs, she fell in love with it. When she went into the artist’s studio she recalls finding herself “in front of the large portrait of Rosa Bonheur and I had the impression she was laughing at me, as if to say ‘Ha! Here you are at last!’”

The studio was almost exactly as it was in 1899 when Bonheur died. The château’s two owners, brothers, only came for a few weekends and holidays to undertake repairs and do a bit of maintenance. The house had cost them both their marriages and vast sums of money, so they were delighted that Brault was interested in it, so much so that they knocked one million euros off the sale price!

But that still left one million euros to find. Brault struggled for three years seeking subsidies, aid, bank loans, partners. Finally, with a grant of €200,000 from the Île-de-France region, a bank loan granted by the only female bank manager she met after being turned down by 20 or so male ones, and the establishment of a real estate investment company called KL Héritage, Brault bought everything except the items exhibited in the house. Those were to remain for three years in the hands of the two brothers with Brault paying them rent for it after which an arrangement was reached with the Seine-et-Marne département who bought them for €400,000, “a very good deal,” Brault remarks.

The museum opened on June 1, 2018, and three months later guests could also enjoy home-made refreshments in the former stables turned into a charming tea room.

Brault’s return on investment has been greater than she imagined. On a Sunday morning in March 2019, she got an e-mail telling her the Château de By’s candidacy to get funding from the Loto du Patrimoine, a project managed by French journalist Stéphane Bern, had been approved. “I’d actually already tried contacting Bern when I was trying to raise the money to buy the place but had never got an answer.”

On 20 September 2019, President Emmanuel Macron and his wife Brigitte (wearing trousers in honour of Bonheur’s special dispensation allowing her to wear them instead of a dress!), accompanied by Bern, came to the Château with a cheque for €500,000. The Loto du Patrimoine “was a real propellant” for the museum and has enabled Brault to repair parts of the roof, the facade of Bonheur’s studio, various beams, the dovecote on the roof and the winter garden whose structure was designed by none other than Gustave Eiffel!

Meanwhile the attics full of notebooks, sketches, animal skins and spiders are slowly revealing their secrets. Amongst the most significant was a large canvas rolled up in the dust which turned out to be the first version of Bonheur’s most famous work “The Horse Fair”. It is exhibited at the Musée d’Orsay exhibition alongside a finished version painted in 1855 now owned by the National Gallery in London. That measures 120 x 254.6cm so was easier to transport than the very large (244.5 cm x 506.7 cm) original canvas which hangs in the Metropolitan Museum of Art in New York. Brault explains that “Rosa bought a good quality canvas 5m x 2.44m high on which she outlined her work in charcoal and highlighted it in chalk but then decided that about 50 cm was missing on every side to give the work more depth. So she rolled it up, bought another canvas that was even bigger and started again.”

Who was Rosa Bonheur?

Marie-Rosalie Bonheur was born on March 16, 1822 in Bordeaux to Sophie Dublan de Lahet (known as Marquis) and Raymond Bonheur, an artist. The eldest and most talented of four siblings who all became artists (Auguste and Juliette, painters, and Isidore, a sculptor), she was taught by her father. But when she was 10 he joined the Saint-Simoniens movement in Ménilmontant, leaving his family penniless. His wife, 36, died of exhaustion in 1833 and was buried in the paupers’ grave in Montmartre cemetery. Her death played a considerable role in the life of her daughter, whom she affectionately called Rosa.

Raymond was forced to return to his family in the wake of his wife’s death and go back to work as an artist. He was commissioned by his neighbours, Mr and Mrs Micas, to paint the portrait of their sickly daughter Nathalie, 12, as they thought she might not have long to live. He brought 14-year-old Rosa along to distract the young sitter. The two girls became fast friends and, a few years later, adoptive sisters when the Micas family adopted Rosa after her father remarried.

Bonheur was fascinated by animals, convinced they have a soul. She attended cattle fairs and went to slaughterhouses to study animal anatomy. But her presence amongst cattle drovers and butchers led to much ribaldry and vulgarity so she asked for a special permit to wear trousers like a man (the French law forbidding women from wearing trousers was only lifted in 2013, even if nobody had abided by it for years!!). Brault has not found “a single pair of trousers” amongst Bonheur’s things but has found many dresses and skirts.

Bonheur was able to live very comfortably from what she earned as an artist. She bought the Château de By with the proceeds from just one sale: the 40,000 francs (€80,000) for “The Horse Fair” which sold again during her lifetime for 208,000 francs the equivalent today of €416,000! She moved into the Château de By with the now-widowed Madame Micas and Nathalie, who lived there until their respective deaths in 1875 and 1889.

The Château de By is a large property which borders Fontainebleau forest. Bonheur turned it into quite the zoo keeping a wide range of animals from sheep and eagles to a couple of lions and a parrot. When the animals died, Bonheur had them mounted so they stayed with her on the walls from where they still glassily stare down at visitors! Today music rather than lions’ roars waft across the property on summer evenings during the museum’s music festival.
Another of Bonheur’s precious possessions still in the Château is an outfit gifted to her by Buffalo Bill who spent six months in Paris in 1889 with his Wild West show at the World Fair. Bonheur really wanted to meet him so he could both tell her how to train the two Mustang horses she’d been given by a wealthy American and introduce her to living bison. But as she spoke no English an interpreter had to be found. She was Anna Klumpke, a 33-year-old American portraitist who’d been living in Paris for 12 years. Following this meeting, the two women corresponded for a few years. Klumpke really wanted to paint Bonheur’s portrait and in 1898 at the age of 76, Bonheur finally agreed. So Klumpke temporarily moved to the Château to work on the portrait and ended up also writing Bonheur’s memoirs.

Her presence brought Bonheur out of the melancholy she had sunk into after Nathalie Micas’ death. She decided to build a second studio on the property for Klumpke but overseeing the work with the builders, she stepped outside for some fresh air into a draft that proved fatal. She died of pneumonia on May 25, 1899 while Anna, at her request, played the piano from the adjoining studio. Klumpke inherited everything and left Bonheur’s studio as it was. Even the cigarette butts are still there! But she in turn later bequeathed the house to her niece Yvonne Sorrel in 1939 whose great-grandsons sold it to Brault. The Brault family are managing to restore the Château de By in such a way that were Rosa Bonheur to return she would find her paints, paintbrushes and apron almost exactly where she left them 123 years ago.

Stay in one of the luxurious rooms © Château Rosa Bonheur

The guided tours are in French. For English speakers: bring your headphones!! You will be provided with a pamphlet on which there are QR codes. In each room simply scan the code to listen to the explanations whilst the guide is speaking in French.