The Eiffel Tower in Film 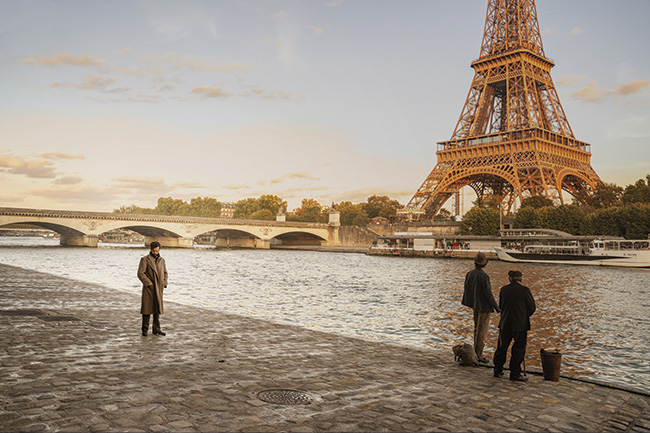 Few famous monuments have had a more impressive movie career than the Eiffel Tower. As a film about its construction hits cinemas, Peter de Villiers looks back at the iconic structure’s big screen appearances.

Tall, luminous and gorgeous from every angle, the Eiffel Tower is the perfect movie star. Small wonder, then, that France’s most recognisable structure has popped up in films for decades. And what a ride it’s been – from acting as a jungle gym for the world’s most famous spy and being rescued by a superhero, to inspiring both a founding father of the French New Wave and a rodent with rare culinary skills. During that time, the Eiffel Tower has been an excellent co-star – doing its job without ever hogging the limelight.

However, in director Martin Bourboulon’s film, Eiffel, the monument takes centre stage. Set in 1880s Belle Époque Paris, we follow Gustave Eiffel (Romain Duris) as he embarks upon the mammoth task of building what would become one of the world’s best-loved landmarks. The film also explores the role played by Adrienne Bourges (Emma Mackey), whose relationship with Eiffel shaped the skyline of Paris. As we delve into the Tower’s history, it’s the perfect time to look back at the monument’s cinematic past. Whether it’s being destroyed, acting as a platform for musical numbers or offering a porthole to another world, La Tour Eiffel remains a towering presence on screen.

The Lavender Hill Mob was released in 1951

So, here’s the plan. Hijack a consignment of gold bullion in London, melt it down and turn it into small Eiffel Tower paperweights so you can smuggle it off to Paris. The only snag for the mob in this Ealing Comedy starring Alec Guinness and Stanley Holloway is that when they catch up with their loot at a kiosk at the Eiffel Tower, six of the souvenirs have accidentally been sold to British schoolgirls. And there’s more bad news – one of the girls plans to give her mini Eiffel Tower to her friend, who happens to be a policeman. While the Eiffel Tower holds its own (both in miniature and full-size form) in the movie, it has some of its thunder stolen by an up and coming actress who would go on to have a rather decent career. Look out for a blink-and-you-miss-it cameo from Audrey Hepburn in this classic crime caper. Tower rating: ⭐⭐⭐⭐

Few films salivate over Paris quite like Stanley Donen’s 1957 musical, whose cast literally sings the praises of the City of Light. Audrey Hepburn plays Jo Stockton, a New York bookshop assistant who has just the right look to be the new face of fashion magazine Quality. Problem is, she won’t play ball with publisher Maggie Prescott (Kay Thompson) and photographer Dick Avery (Fred Astaire). Then she finds out the next shoot will be in Paris. The excitement the trio feel at being in the French capital is summed up with the jaunty number Bonjour Paris, where the characters run through their plans for the trip in a sequence that stitches together more must-see sights than a tourist office video. After a full day, all three agree there’s “something’s missing, there’s one more place to go”… Cue a gorgeous shot of the Eiffel Tower fronted by fountains as the trio take a lift to the top of the monument and enjoy panoramic vistas from the viewing platform. Tower rating: ⭐⭐⭐⭐⭐

Whether it’s aliens in Mars Attacks!, puppets in Team America or an asteroid in Armageddon, Hollywood loves blowing the Eiffel Tower to smithereens. Perhaps the most unexpected – and certainly the most comical – destruction arrives at the end of The Great Race, Blake Edwards’ sweeping action adventure that sees the dashing Great Leslie (Tony Curtis) challenge the dastardly Professor Fate (Jack Lemmon) to a car race from New York to Paris. After a hectic journey which includes saloon brawls, polar bears and sinking boats, Leslie is leading as the competitors tear through Paris but, to prove to beautiful photojournalist Maggie DuBois (Natalie Wood) that he cares more about her than winning, our hero stops short of the finish line at the Eiffel Tower and lets Fate win. Incensed by this, Fate insists they race back to New York – all part of a plot to blow up Leslie’s car with a cannon. He misses, hitting the Eiffel Tower, which buckles and comes down in instalments in a comedy pratfall that would have made Jacques Tati proud. Tower rating: ⭐⭐⭐⭐

François Truffaut’s debut feature film has perhaps the most famous title sequence in French movie history – one in which the Eiffel Tower plays a crucial role. The story about neglected youngster Antoine Doinel (Jean-Pierre Léaud), who has to deal with self-absorbed parents and brutal police officers, starts with a travelling shot through the streets of Paris. The Eiffel Tower peeks out above rooftops at an angle suggesting it’s the point of view of a child sitting in the back seat of a car. Street by street, the camera moves ever closer to the structure, keeping its gaze locked on the tower. Eventually, we’re right under La Tour Eiffel, briefly staring up at its majesty before the car speeds away with France’s most reassuring symbol disappearing into the distance. It’s the most perfect of openings for a heartbreaking coming-of-age tale about a boy for whom a normal, happy life is out of reach. Tower rating: ⭐⭐⭐⭐⭐

You really can’t take Lois Lane anywhere. In what is a common theme across the first two Superman movies, the Daily Planet’s best reporter, played by Margot Kidder, continually gets herself into trouble and is rescued by Superman (Christopher Reeve). And it doesn’t take long for Lois to do something stupidly dangerous after arriving in Paris in Richard Lester’s campy sequel. With terrorists taking over the Eiffel Tower and threatening to detonate a nuclear bomb, the journalist covers the story by hanging onto the bottom of a lift containing the device. She’s soon plummeting to her death, with Superman arriving in the nick of time – swooping in over Paris and catching the free-falling lift. With the residents of Paris still in mortal danger, the Man of Steel flies the lift straight through the top of the Eiffel Tower and into outer space where it explodes – leaving Lois standing on the Tower of Iron contemplating her next damsel-in-distress move. Tower rating: ⭐⭐⭐

Rémy looks out over Paris © Alamy

While the 14th Bond film came in for a lot of criticism when it was released in the late 1980s – not least because Roger Moore was 57 at the time of filming and needed a stunt double to run up stairs – A View to a Kill has a lot going for it: a great villain played by Christopher Walken; a memorable henchwoman in Grace Jones’ May Day and a fabulous chase scene on and around the Eiffel Tower. After killing a local private detective at the Jules Verne restaurant on the tower, May Day scarpers up the monument with Bond in fast (well fast-ish) pursuit. As 007 closes in, the assassin jumps off the top of the tower and parachutes to the bottom. Not to be outdone, Bond rides down atop of one of the lifts and hijacks a taxi to continue the chase. Tower rating: ⭐⭐⭐⭐⭐

The focus of Baz Luhrmann’s jukebox romantic drama might be the cabaret hall at the foot of Montmartre which gave us the can-can, but the Eiffel Tower – a fellow Belle Époque structure – does pop up in a pivotal scene. As the love between young writer Christian (Ewan McGregor) and star Moulin Rouge performer Satine (Nicole Kidman) starts to bloom, their romance is conveyed in a lavish reworking of Elton John classic “Your Song”. In what is an increasingly fantastical sequence, Christian’s voice lights up the Eiffel Tower before the couple twirl into the clouds and hunker under a pink umbrella while glitter rains down on them. With the moon smiling from on high, Christian hangs from the monument as he croons to Satine. It’s magical stuff all right. Tower rating: ⭐⭐⭐⭐

Pixar’s love letter to Paris and its gastronomy has so many magical scenes, it’s difficult to narrow it down to just one. A strong contender, though, is the moment Rémy (Patton Oswalt) – a rat with a highly developed sense of taste and smell – realises the sewer he’s been hiding out in belongs to the greatest culinary destination on Earth. After being told to leave his gloomy surroundings and look around by the ghost of his hero, chef Auguste Gusteau (Brad Garrett), Rémy scurries up inside an apartment building and ends up on the roof. There, stretching out in front of him is the City of Light with the Eiffel Tower shimmering in the distance. “All this time I’ve been underneath Paris?” says Rémy, with the elation every foodie feels as they prepare to eat their way around the French capital. Tower rating: ⭐⭐⭐

Belgian filmmaking duo Dominique Abel and Fiona Gordon use the French capital as their playground in the oddball Lost in Paris, their expertly crafted physical comedy routines reaching a climax at the top of the Eiffel Tower. Gordon plays Fiona, a Canadian in Paris looking for her lost aunt Martha (Emmanuelle Riva). During a bumbling search she crosses paths with homeless man Dom (Abel) who agrees to help her track down the missing pensioner. They eventually land up on the Eiffel Tower where the accident-prone Fiona almost tumbles to her death when the ladder she is climbing comes loose. They find Martha sleeping in a satellite dish and the trio take in spectacular views of Paris in what is a moving end to a mad adventure. Tower rating: ⭐⭐⭐⭐

The Eiffel Tower may look harmless but, in the latest Men in Black film, it’s home to a wormhole that could lead to the destruction of the planet. Stepping up to stop parasitic race The Hive from piling into Paris are agents Hight T (Liam Neeson) and H (Chris Hemsworth) who, after interrupting a wedding proposal on the tower, do battle with the bad guys as the city sparkles below. Just when you think things are safe, Agents H and M (Tessa Thompson) need to travel back to the Eiffel Tower to stop another Hive surging and ensure the only heaving, bug-eyed creatures on the monument are tourists who decided to use the stairs and not the lift. Tower rating: ⭐⭐⭐

As a proud Parisian, Romain Duris jumped at the chance to play Gustave Eiffel, the man who created the city’s most famous landmark. “Ever since I was a kid and even today, when I walk by the Eiffel Tower I am fascinated,” he explains. “To me, the monument has always been magical. And I was very drawn to the theme of the engineer-artist who finds refuge in his work and sees it through to completion as though it were a declaration of love.”

Making it easier for Duris to get under the skin of Eiffel (who also built the framework for the Statue of Liberty) was the scale of the production, from the lush period costumes to the construction of a life-sized reproduction of the Eiffel Tower. “Eiffel is incredibly spectacular,” he promises. “I realised this as I wandered around the set where foundations of the tower had been reconstructed full scale. And everything is heightened exponentially on-screen. It lends even more strength to your acting.”

Eiffel is now in cinemas in the UK and available to stream online.

Lead photo credit : Romain Duris as Gustave Eiffel, in a scene from Eiffel