In at the Deep End: Gilles Lellouche, Director of “Le Grand Bain”

Gilles Lellouche’s splashy debut, Le Grand Bain, made waves at the Cannes Film Festival. The actor-turned-director tells Lanie Goodman getting behind the camera was life-changing

For all his good looks, Gilles Lellouche doesn’t quite fit the stereotype of the sculpted male movie star, full of swagger and a scorching sexual vibe. He could be a French version of the boy next door or your jokey bar-hopping buddy, even if he always seems to steal the show with his glibly engaging performances.

It’s a warm May afternoon on the rooftop of a five-star hotel in Cannes, and everyone is sitting close together, trying to avoid the blazing sun. Lellouche is draped on a white leather sofa, talking to the press as he gulps down mineral water. His rapid-fire speech is punctuated by a disarming smile and occasional bursts of laughter. 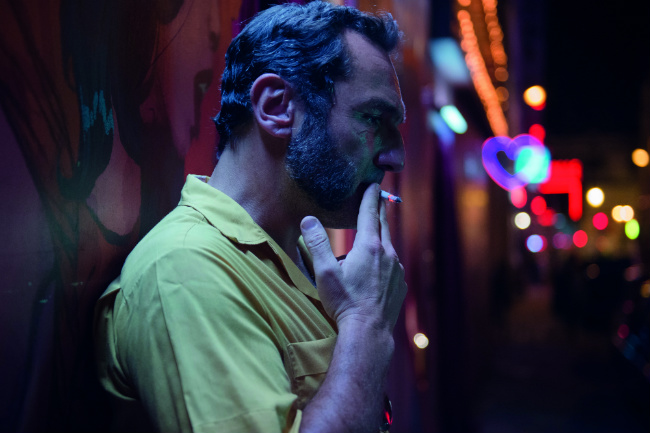 “Humour was also a big part of my family life,” he says. “I think it’s both a great ally and self-defence when dealing with your friends.”

And he has plenty of pals in the film industry, both off-screen and on, which is precisely part of the problem, he says.

International audiences will recognise the actor for his broad range of supporting roles in such films as Les infidèles (The Players), a series of sketches about infidelity co-starring Jean Dujardin, and Claude Miller’s period drama, Thérèse Desqueyroux, opposite Audrey Tautou. But most movie-goers are likely to associate Lellouche with his close friend, actor- director Guillaume Canet, whom he met in 2002 when he was cast in his first directorial feature, Mon idole (Whatever You Say). Still, it wasn’t until the release of Canet’s hit drama Les petits mouchoirs (Little White Lies) in 2010 that Lellouche’s career really started to soar.

These days, the 46-year-old is finally getting his due share of the limelight. Just a few months ago, he received a nomination for Best Supporting Actor at the prestigious César movie awards for his turn as a loud-mouthed crooner in Le Sens de la Fête. 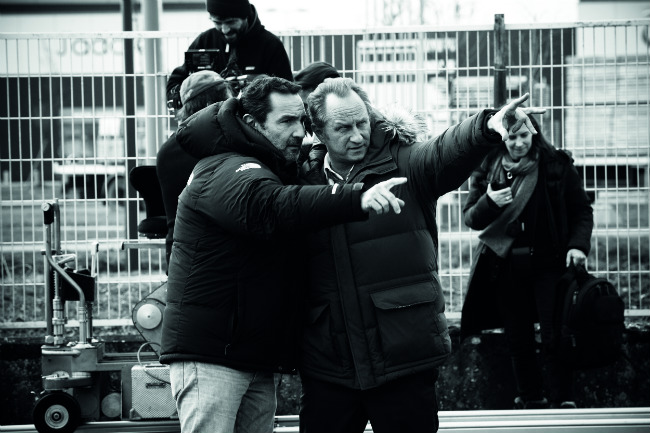 And today, he is promoting his directorial debut, Le Grand Bain (Sink or Swim), at the Cannes Film Festival, a feel-good ensemble piece which he co-wrote with Ahmed Hamidi and Julien Lambroschini.

“I’ve done several ensemble films, but in Le Grand Bain, I wanted to create a totally different family of French actors, not just old friends of mine like Jean Dujardin or Marion Cotillard,” says Lellouche.

“I wanted to take on new risks and challenges – fight the impulse of remaining with the same group of friends because there’s a certain ease.”

Well, with one exception, since Guillaume Canet (with whom Lellouche has collaborated on ten films to date), also stars in the film.

His initial idea for a movie following a motley crew of men in their mid-forties suddenly crystallised when he stumbled upon the 2010 Swedish documentary Men Who Swim, directed by Dylan Williams.

Riffing on the subject, Le Grand Bain is a humorous chronicle about middle-aged men who experience improbable success when they join an all-male synchronised swimming team.

“I already had the characters more or less fleshed out but it suddenly struck me that the context was exactly what I was searching for – something poetic, unusual, a bit more feminine that would add to the flavour of this marginal group of misfits.”

Realism was paramount and Lellouche was keen to show these middle-aged men in their not-so taut glory, love handles, flab and all.

“I can’t stand the contemporary world’s dictatorship of the perfect body,” he says. “I wanted to show men who are getting fat, with bellies and hair all over their body and who don’t really give a damn.”

As if to prove his point, he grabs his own barely perceptible paunch and squeezes it, grinning. “You see? That’s just what happens. They are what they are. They’re naked in every aspect and don’t obsess about their image.”

If Lellouche had any preliminary doubts about his 40-something stars agreeing to perform in Speedos, they quickly vanished.

“During the five months before shooting started, all the actors were training twice a week very seriously in synchronised swimming,” the director says. “They were totally used to being in bathing suits with each other. The only problem that came up was before the championships scene, when everyone had to shave.”

“I have a plastic bag at home full of all the body hair from all my actors,” he adds with a laugh.

The movie opens with a voiceover and slick montage that zips from birth to midlife, beginning with a baby stubbornly trying to fit a square peg in a round hole. The metaphor is clear: Lellouche’s group of outsiders feel out of place, unappreciated and unloved by their wives and children.

Enter Bertrand (brilliantly played by Mathieu Amalric), who has been out of work for two years and begins his day with a bowlful of cereal laced with anti-depressants before collapsing on the sofa to play Candy Crush – much to the dismay of his wife, Claire (Marina Foïs), who tries to rouse him out of his funk. When he sees a notice at the municipal pool about joining an amateur men’s synchronised swimming team, he signs up, never imagining that the support of his fellow aquatic buddies will help him change his life.

Among them are Laurent (Guillaume Canet), an angry factory manager whose marriage is on the rocks and whose demented mother constantly insults him; failed rocker Simon (Jean-Hugues Anglade), who lives in a van and works as a busboy at his daughter’s school cafeteria; and Thierry, the kind-hearted but naive pool custodian (Philippe Katerine).

Trained by a recovering alcoholic, Delphine (Virginie Efira), who reads the men poetry as they exercise, the group is still floundering until along comes her paraplegic former swimming partner, Amanda (Leïla Bekhti). Somehow, she whips them into shape, boot-camp style.

One of the biggest challenges, Lellouche concedes, was filming the underwater scenes and spending endless hours on set within the damp confines of a swimming pool.

“In fact, there’s a lot of inertia involved when you’re shooting underwater. Cinematography and water really aren’t very compatible so it’s a very slow and laborious process,” he explains. “But the real problem when you’re shooting in a pool is the acoustics. Everything echoes!” And larger-than-life, fast-talking Belgian actor Benoît Poelvoorde – who plays Marcus, a skirt-chaser in total denial of the fact that his swimming pool and spa business is going bankrupt – did not help matters, he jokes.

“Benoît is like a child,” Lellouche says. “He always had to be kept busy because he gets bored so quickly, which is why I did a lot of long single takes and continuous shots with him so he’d have to be in constant focus. Otherwise you would risk losing a moment of brilliance.”

A SONG AND DANCE

As the two-hour film follows each personal drama in the lives of the swimming team, one of the highlights is the nostalgic soundtrack.

“I went back to the 1980s for music that my characters would have listened to when they were in their formative years, songs that expressed their despair and idealism as teenagers, beginning with Tears for Fears’ hit, Everyone Wants to Rule the World. I love one of the sentences in the lyrics – ‘There’s no turning back’ – which really encapsulates these men’s lives in their mid-forties. What do we do now, where do we go from here?”

Some of the most memorable scenes are the actual performance of the synchronised swimming routines (yes, those guys do eventually improve), to the tune of Olivia Newton-John’s Physical or the soft rock classic, Easy Lover, by Phil Collins and Philip Bailey. For the catchy original musical score, Lellouche turned to Jon Brion, whose credits include Magnolia, Eternal Sunshine of the Spotless Mind and Lady Bird. 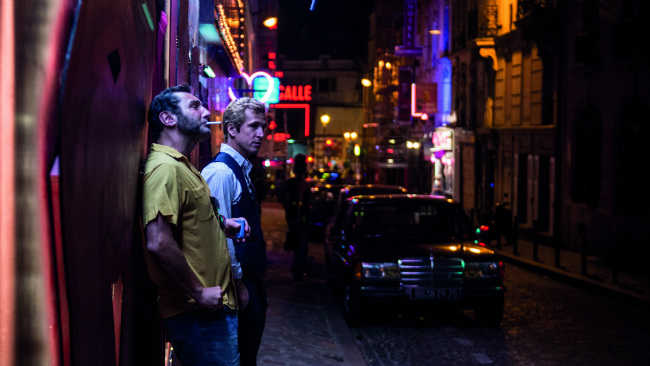 Has Lellouche’s directorial venture with Le Grand Bain changed his perspective as an actor?

“Truthfully, I don’t miss acting,” he admits. “They are two entirely different jobs with different approaches, which is why I didn’t want a part in my own film.

“As a director, you’re always aware that the clock is ticking, you have a million things you have to look after, plus you’re constantly being solicited by people who deal with all kinds of things. From morning until night you’re moving at 200 kilometres an hour so you’re totally inhabited by the film.”

“Even now I find things are slowing down a bit too much and I miss that activity,” he goes on. “It’s a very different intellectual and emotional involvement when you’re working as an actor. You enjoy it, of course, but you spend a lot of time waiting on set.”

He is also due to reprise his role as Éric in Canet’s sixth feature film, Nous finirons ensemble (We’ll End Up Together), a sequel to Les petits mouchoirs (Little White Lies) which picks up seven years after the friends’ ill-fated holiday.

For the first time in our interview, Lellouche pauses, gratefully accepting the espresso that is handed to him.

“You know, I think that I want to spend more time directing rather than acting,” he says. “I think that now, as an actor, I would find the process boring, time would go by too slowly.” If Le Grand Bain’s warm critical reception is anything to go by, he’s got a bright future ahead of him. 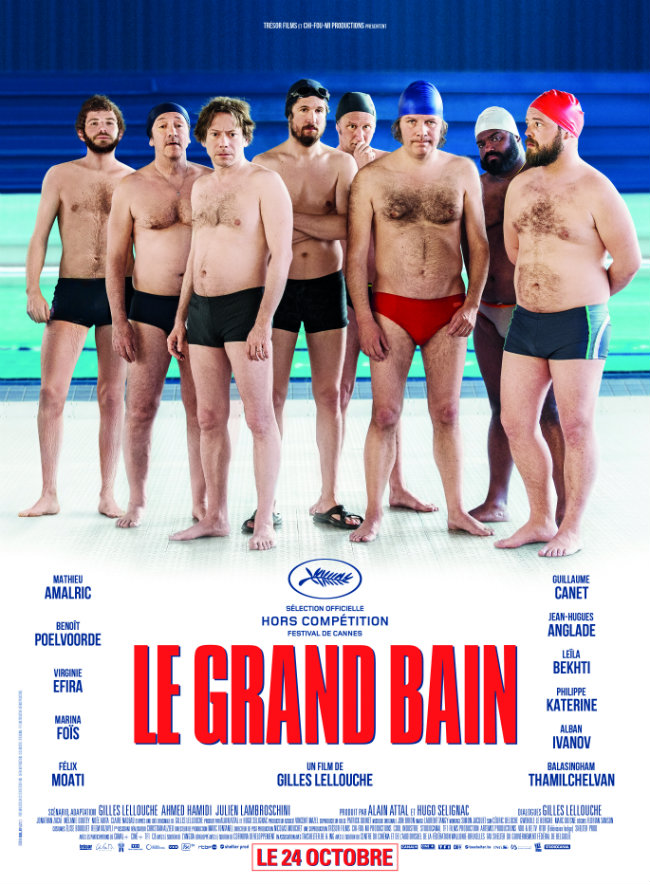